Michelin is pleased to present the 2023 selection of the MICHELIN Guide Seoul 2023. With a total of 176 restaurants, including 35 Star restaurants and 57 Bib Gourmand restaurants, the 2023 edition illustrates the great dynamism of Seoul’s gastronomic scene.

“Faced with the COVID crisis, the dining industry has faced unprecedented challenges, however, chefs in Seoul have determined to leverage the challenges into meaningful growth. As a result, the arrival of inspiring new restaurants, coupled with the creative inventions of chefs, has allowed gastronomy to flourish. We are very pleased to watch consistent growth of culinary industry and gastronomic scene of Seoul for last 7 years since its first edition announcement in 2016. Particularly this year, we are excited to announce a new three MICHELIN Stars restaurant in Seoul” said Gwendal Poullennec, International Director of the MICHELIN Guides. “Seoul is one of the most desired destinations among global travelers as popularity of K-Culture increases. We are inspired by Seoul as a place where people can taste a silver of diverse cultures from all around the world." 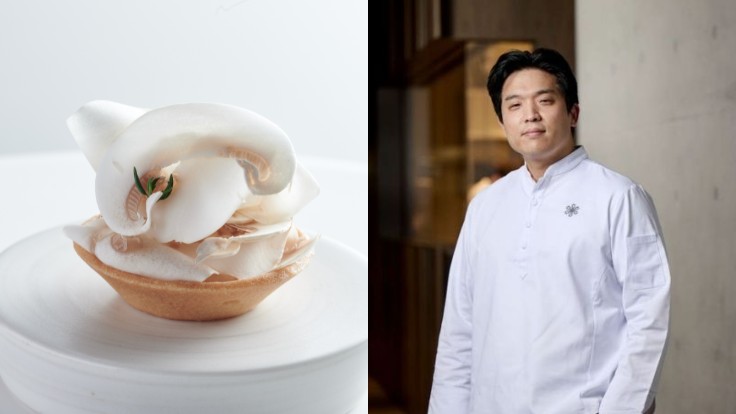 Chef Ahn Sung-jae has a talent for sensibly expressing the delicate nuances of ingredients. Each dish, reflecting creative ideas during the meal, provides an outstanding balance of taste based on a high level of perfection. Excellent cuisine and hospitality that assimilate also maintain the highest standards in Seoul. The consistent quality improvement of Mosu every year without stagnation gives a deep sense of confidence. 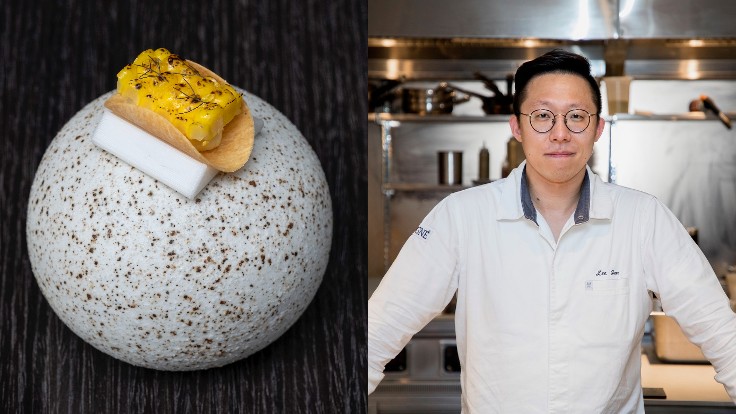 Under the slogan of 'Contemporary Cuisine of Seoul', Soigné shows the creative cuisine of Chef Lee Jun and his team. His cuisine inspired by food around the world develops into a new style by harmonizing with the chef's ideas. The menu that changes periodically is described as an ‘episode’, and each episode with a unique theme is as if you are enjoying a poem. 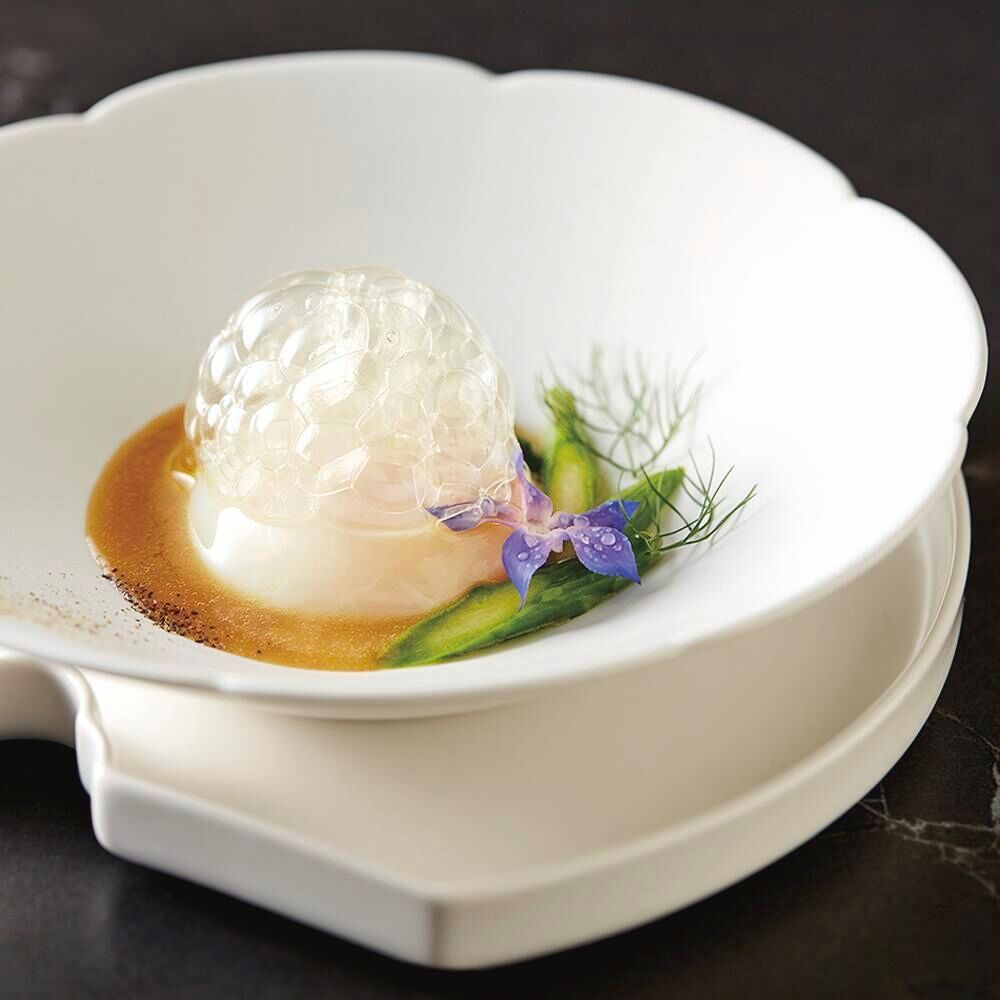 One restaurant promoted to one MICHELIN Star

Soul of Chef Yoon Dae-hyeon and Chef Kim Hee-eun, who challenged stylish fine dining in Haebangchon(Itaewon), where the scene of modern-day Seoul remains. The diverse culinary traditions and ingredients one may encounter in modern-day Korea converge with the familiar tastes found in everyday life to form unique fusion creations. In Soul's cuisine, the chefs' concerns for growth are glimpsed, and challenging attempts are well incorporated into the taste. 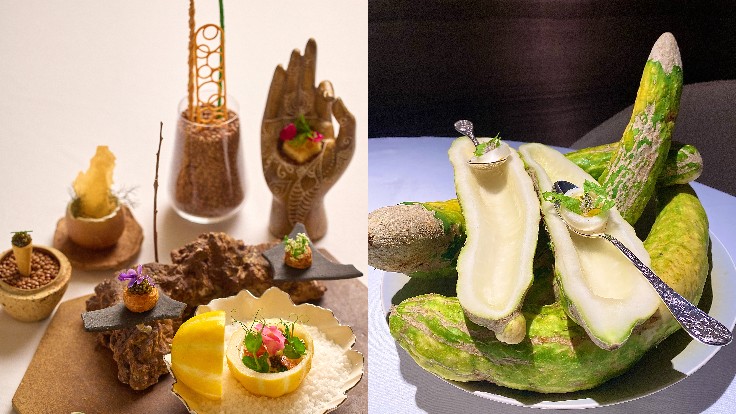 KANGMINCHUL restaurant (Contemporary) Chef Kang Min-chul has been greatly inspired by time spent with master chefs, instilling in him a pride and passion for cuisine and culinary philosophy. It's also helped him find his own direction and the fare at this namesake restaurant genuinely reflects his attitude toward gastronomy. The menu comprises dishes offering a kaleidoscope of flavors while highlighting the diversity of refined French cuisine. 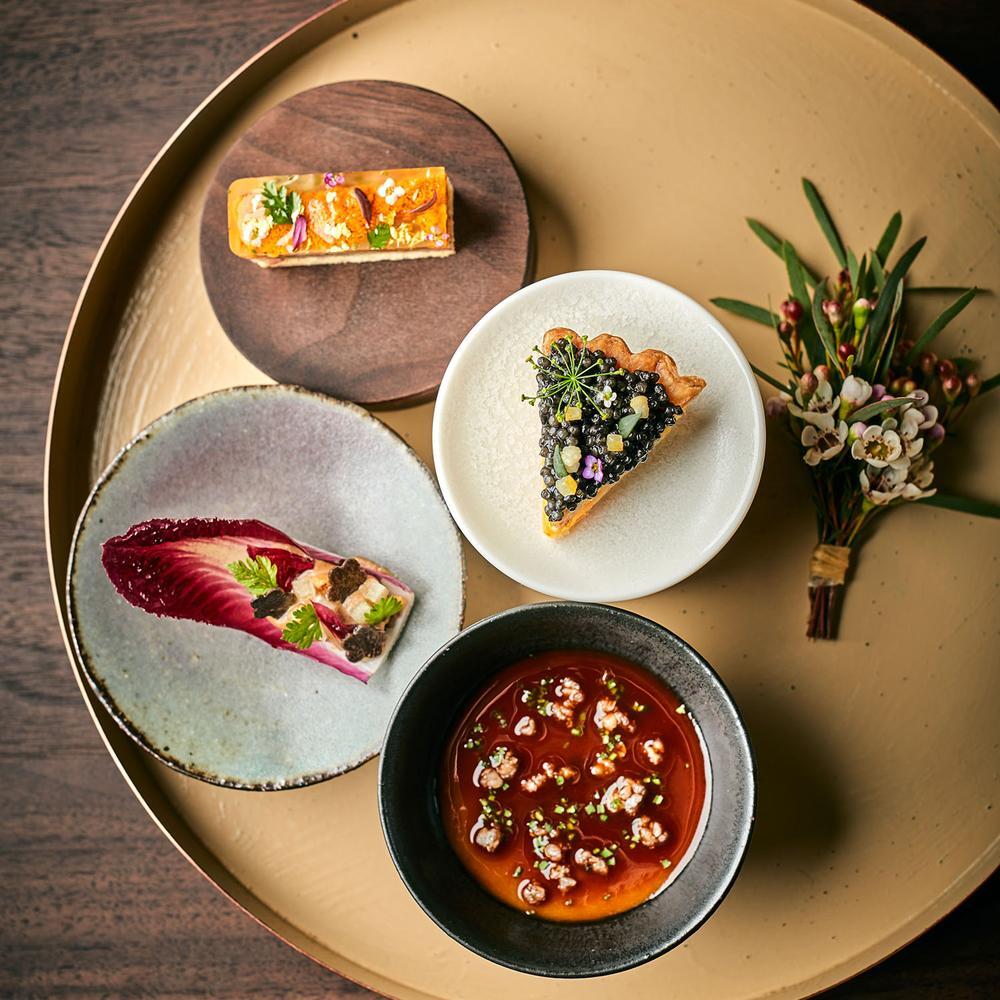 Restaurant Allen (Contemporary) The chef Allen Suh and his veteran culinary team create dishes, based on seasonal ingredients, that illustrate the beauty of Korea’s four seasons. His mastery in utilizing a wide variety of tableware for the art of plating adds visual delight to the restaurant’s delicate flavors. 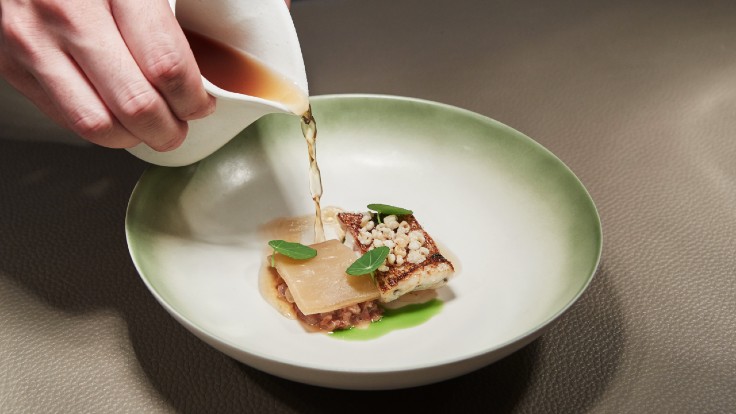 Solbam (Contemporary) Chef Eom Tae-jun’s wide range of culinary experience and expertise meet Korean elements. His study of local ingredients (guided by his respect for nature and Korea’s four seasons) and his knowledge of Korean cooking techniques culminate in an uncanny synergy that gives rise to the restaurant’s unique modern dishes. 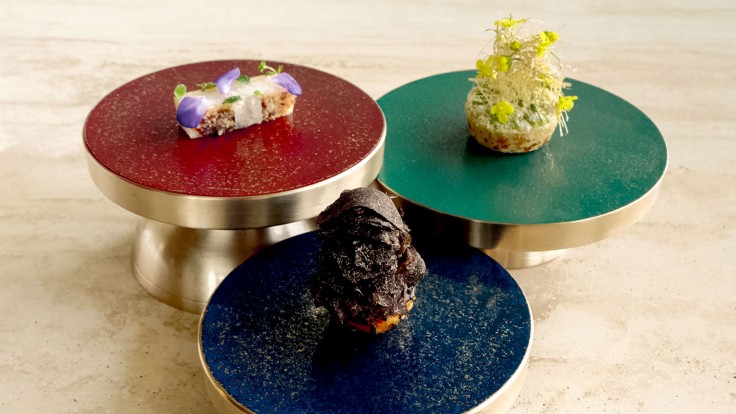 Eatanic Garden (Innovative) As the name suggests, the space evokes a beautiful urban garden that awakens the five senses. There is no menu here; instead, you'll receive an illustrated guide depicting the main ingredients. Chef Son Jong-won, who is also the head chef at L’Amant Secret, helms the kitchen, reinventing Korean food with a creative twist and reflecting the aesthetics of fermentation and aging. 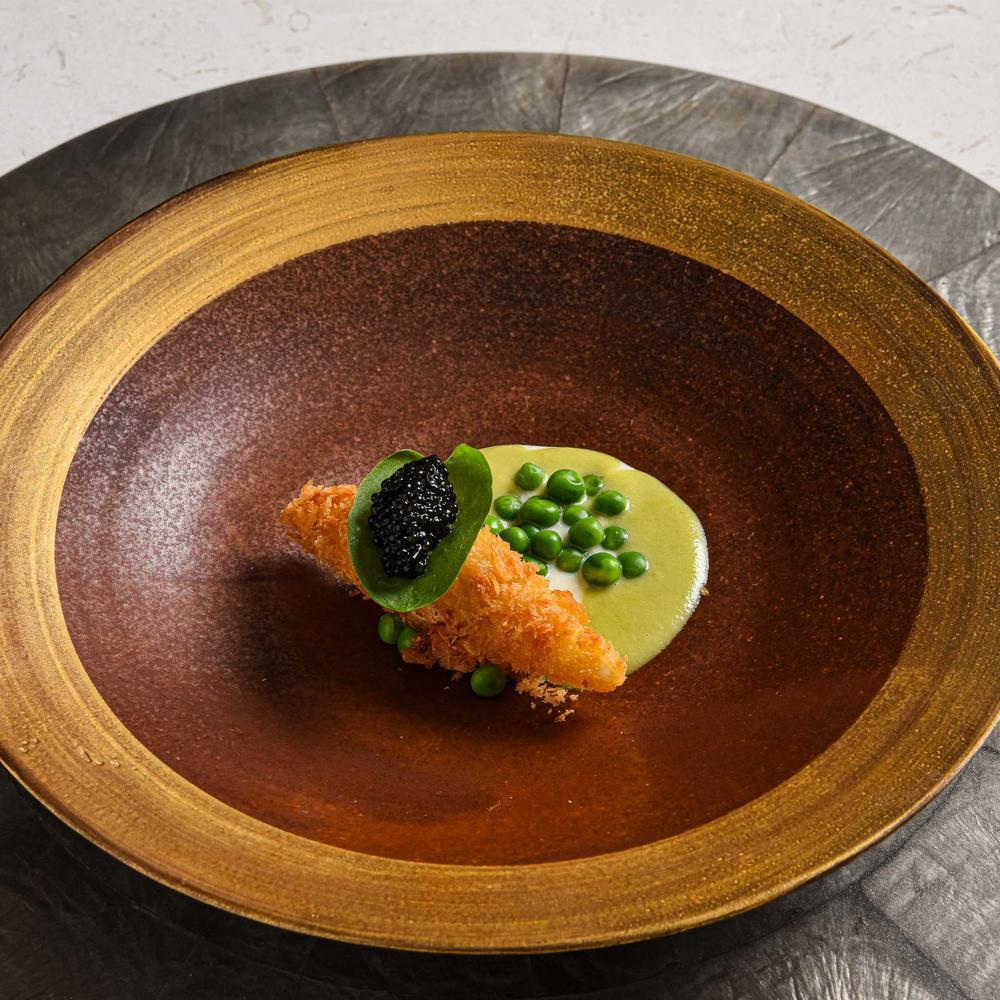 1 New Green Star restaurant awarded - Total 3 Green Star Restaurants in Seoul
The MICHELIN Green Star is distinction highlighting restaurants at the forefront of the sustainable gastronomy. Hwanggeum Kongbat and A Flower Blossom on the Rice retained their MICHELIN Green Star for 3 consecutive years since its introduction and one new restaurant. GIGAS is awarded a Green Star. At GIGAS’ more than 95% of the vegetables used in the restaurant use ingredients from a directly managed farm, led by the chef’s father, and the remaining 5% is used in connection with organic producers across the country. The restaurant’s management also insist on the use of recyclable and sustainable energies and materials and makes significative efforts to pursue a “No food waste” policy.

2023 MICHELIN Young Chef Award: KIM Jun-hyung (Restaurant ON)
Born in 1993, Chef KIM, Jun-hyung honed his culinary skills and learned how to run a small restaurant under Chef SEO, Seung-ho, who the first generation of French cuisine in Korea. Based on his faithful growth, he opens his own small restaurant, in Seoul and rises to his dream of becoming an owner-chef. His cuisine faithfully shows the original taste of ingredients based on classic French recipes that are faithful to the basics.

2023 MICHELIN Mentor Chef Award: PARK, Kyung-jae (Kojima)
Chef PARK Kyung-jae, from a small island village in the south sea of Korea, grew up exposed to a variety of seafood from an early age under the influence of his father, who made a living by fishing. Although he has worked as Itamae(sushi chef), for 30 years, he is still devoted to handling sushi and wants to grow, so there are many chefs who respect him.

2023 MICHELIN Sommelier Award: KIM, Jin-beom (Mosu)
In discussing the remarkable growth and development of MOSU, the role of sommelier KIM, Jin-beom stands out. If there is Chef AHN, Sung-jae's outstanding cuisine at the heart of MOSU, the performance of sommelier KIM, Jin-beom, who played a role in providing customers with a guide for variations in taste and variety of flavors by combining them with drinks, and by adding pairing skills a nice way to enjoy MOSU's cuisine.

Every hotel in the Guide is chosen for its extraordinary style, service, and personality — with options for all budgets — and each hotel can be booked directly through the MICHELIN Guide website and app. The selection for Seoul currently features the city’s most spectacular hotels, including design-forward boutiques like Hotel Cappuccino, standouts from our “Plus” collection like Signiel Seoul, centers of creativity like the RYSE, and an oasis-in-the-city resort like Banyan Tree Club & Spa.

The MICHELIN Guide Celebrates Its Debut In Malaysia

Here Are Affordable Food Spots To Try In Seoul