The Taste of Thai Heritage

For the third consecutive year, Mekhong - the Spirit of Thailand, is continuing with its campaign to improve the Thai food and beverages scene. Following the success of the 2018 Mekhong Thai Spirit Cocktails competition, the revelation of the 2019 edition of artisanal Thai cocktails demonstrates a remarkable development in the Thai mixology movement. Clearly the use of local Thai ingredients can no longer be considered a trend seen exclusively in the food and beverages industry, but also in the mixology industry.

Raise your glasses to the first three cocktails that tell the enthralling story of Thailand’s history and culture through local flavours.

Kam Khong—Sri Trat (Michelin Plate)
A cocktail filled with historical connotations, Kam Khong is named after Major General Luang Vichit-Vadakan’s composition of the same name. Using the melody from the song Swanee River, the song Kam Khong, composed as an anthem in response to the Franco-Siamese war whereby Thailand, then the Kingdom of Siam, agreed to cede parts of its territory to the French. Sacrificing a portion of Siam’s territory, the lands that remained, including Trat province, later became Thailand. As an homage to this situation, the mixologists at Sri Trat chose to incorporate a saffron wine reduction with Mekhong Thai spirit, which shares the same historical background as the song Kam Khong. With its rounded citrus and ginger undertones, the blend is infused with vanilla, bay leaf and a French port wine reduction—an allusion to the French melody of Swanee River. Using heat to reduce the percentage of alcohol, what remains is a strong presence of the Mekhong spirit as a reminder of Thailand’s hardship and astonishing history. 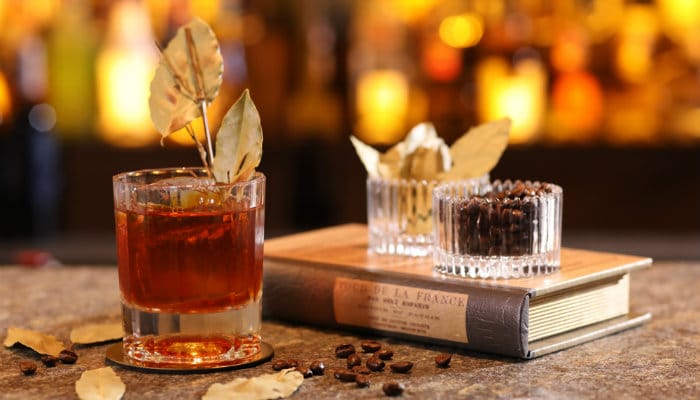 Koon Suek—Baan Suriyasai (Michelin Plate)
Just the name itself implies the cocktail’s fiery disposition. The cocktail Koon Suek, which translates as ‘warrior’ in Thai, is Baan Suriyasai’s contemporary interpretation of ancient Thai culture. Playing on the tradition where men would drink liquor to raise their spirits before a battle, Koon Suek incorporates the quality of the Thai spirit Mekhong, with lemongrass and sweet basil to create a unique drink with a spicy kick. Loved for the combination of vanilla and caramel notes, Mekhong Thai spirit also carries undertones of over ten local herbs—namely cardamom, clove, galangal and ginger. The cocktail is enhanced with red wine to create a fierce, reddish hue for a contemporary twist. Visually symbolic, the garnish of lemongrass represents ancient weapons of swords and spears, while the flower garland alludes to the auspicious keepsakes given by loved ones. 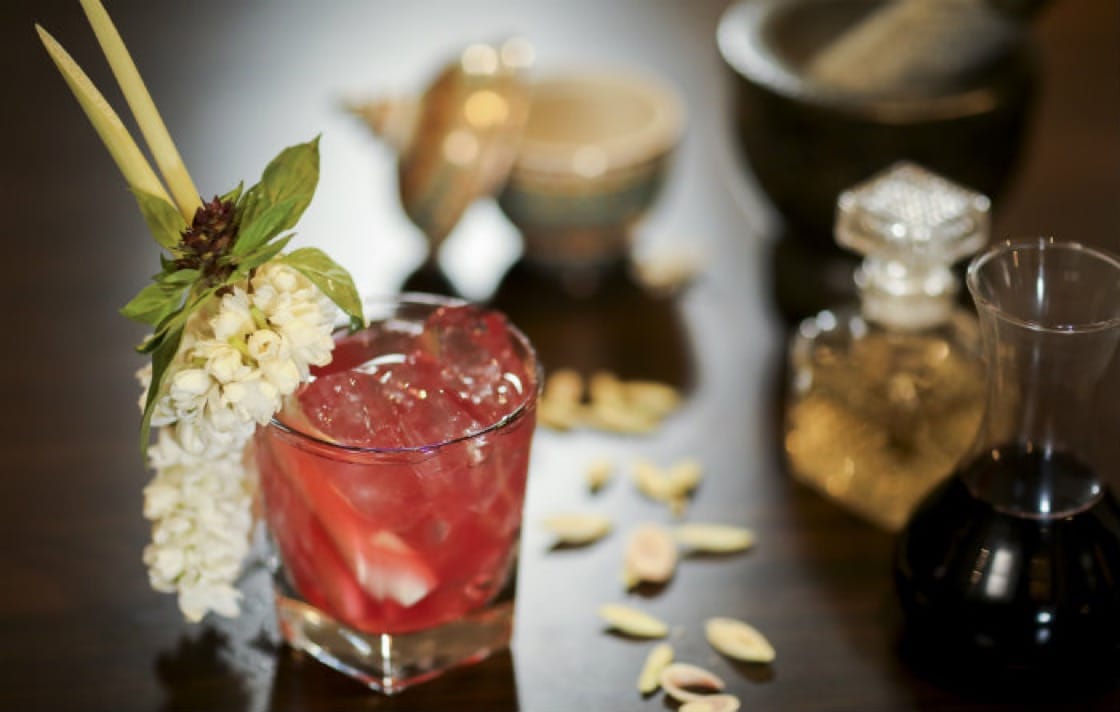 Thong—TEP Bar
Well-established as the go-to place for Thai-inspired cocktails, TEP Bar does not disappoint with Thong, a cocktail that infuses the crème de la crème of sweetness with Mekhong Thai spirit. Representing Thailand’s Golden Age, Thong, which means ‘gold’, conveys the opulence and glory of the country through its golden hues and luscious ingredients. The use of egg white adds to the creaminess of the drink, while the infusion of Mekhong Thai spirit with ripe mango, palm sugar and numpueng duan ha, or May honey, give Thong a subtly sweet and fragrant body. To balance out the orchestra of flavours, mango sheets and lime offer an extra depth of tanginess. A subtle flourish in the simple form of dill offer a simple yet refreshing final touch. Well-designed, the tropical and vibrant flavour of Thong allows it to be enjoyed throughout the year. 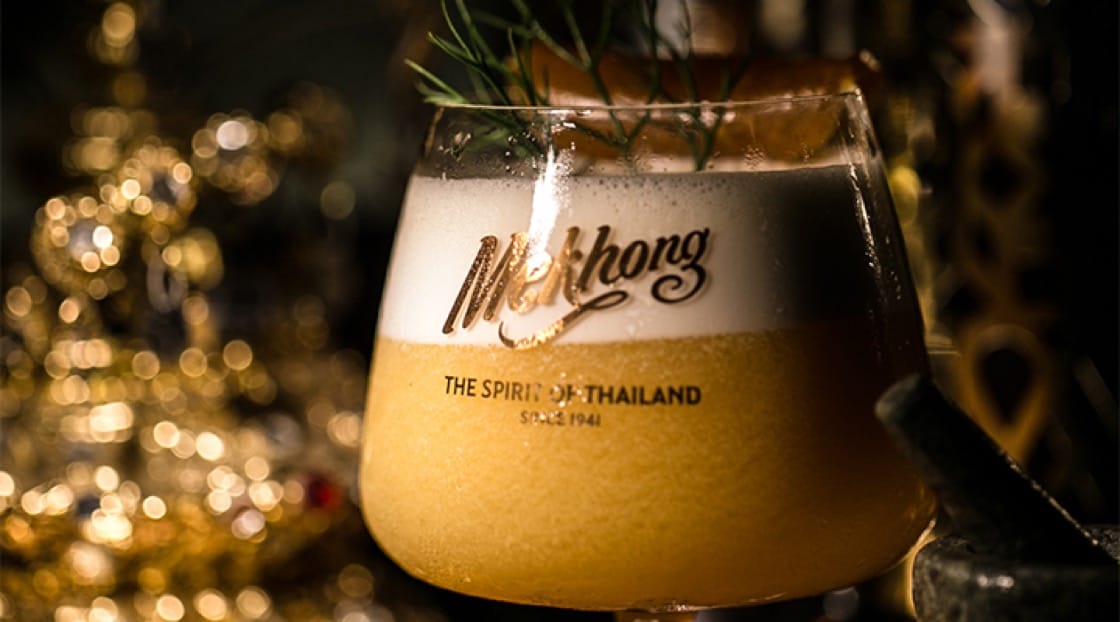 A creation of TEP Bar, Thong represents Thailand’s wealth and prosperity through a flaming gold cocktail infused with rich ingredients

The 2019 edition of Mekhong Thai Spirit Cocktails demonstrates that the use of local Thai ingredients is not merely a trend, but rather, a practice that is slowly becoming a part of the Thai food and beverages scene. Each year, the creations continue to grow in depth and subtlety, proving that artisanal Thai cocktails are, essentially, a form of expression that can be used to express the many facets of Thai culture. Embodying the Spirit of Thailand, each winning cocktail uses local Thai ingredients with Mekhong to portray a unique interpretation and presentation of Thailand and its history. 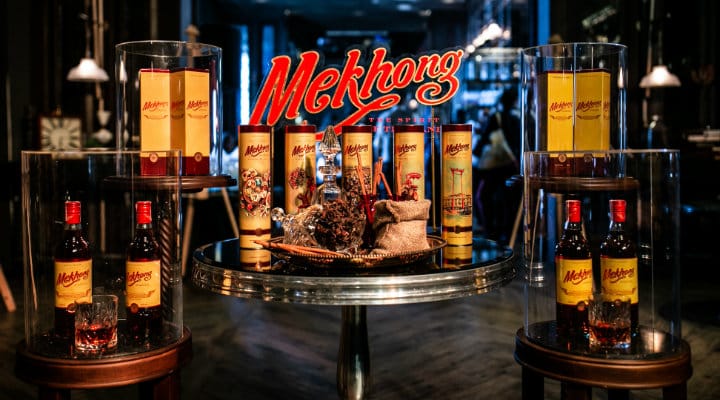 Here's What Our Inspectors Said About Sri Trat (Michelin Plate)
Trat is a province on the eastern seaboard of Thailand known for fiery seafood and curries, and the owners of Sri Trat brought this famed regional food to the capital to much fanfare. The star in the kitchen is the owner's mother - you'll find a funky mural of her in the dining room. The menu is a roll-call of her favourite recipes, including Thai-style chilli dips, homemade fish sauce, and stir-fried noodles with soft shell crab. Don't miss the massaman curry with young durian or the anchovy and minced pork chilli dip.

Here's What Our Inspectors Said About Baan Suriyasai (Michelin Plate)
The stunning Victorian colonial interior of this 100 year old building ensures that your dining experience here will be special, while rare royal recipes unearthed by the chefs and owner promise a true culinary journey. Highlights include a refreshing starter of watermelon with toasted fish flakes, while the five spice stew with medium boiled egg is the house signature dish. Private rooms are perfect for groups of up to 25.

This content was brought to you by Mekhong, Official Supplier of the MICHELIN Guide Bangkok 2018.
To know more about Mekhong: www.mekhong.com, https://www.facebook.com/mekhongthailand/

This post is brought to you in partnership with Mekhong

Gastronomy Journey, The Series of Thailand Ep.2 The Taste of Chiang-Rai province

Northern Thai Food and Nature: The Role of Natural Materials Inside the Kitchen

From lush mountain jungles to deep river valleys, Thailand’s northern region produces abundant natural materials—many of which have become indispensable in the kitchen.

dining out Valentine's Day ingredients
All articles of Features

When done right, cocktail and Thai food pairings can be a match made in heaven.

Spicy Traditions: Stepping Into A World of Artisanal Thai Cocktails

The best way to get to know a culture is through local dishes. For something more exciting, why not explore the exotic flavours of Thailand’s local fruits, herbs and spices through these four exceptional cocktails?

These are the Best Thai Food-Inspired Cocktails in Bangkok

Have your som tum and drink it too. These cocktails will satiate your Thai food cravings one booze-infused sip at a time.