Han says: “As someone does Mod Sin cuisine, you don’t know how it can be done differently in another country. However, JL Studio managed to intertwine elements of fun with finesse through dishes such as Pocky sticks made with bak kwa, kite-shaped nasi lemak fritters and bandung chocolate ball.”

It is little surprise that Han decided to team up with Jimmy Lim, head chef at JL Studio for a series of cooking collaborations. JL Studio, which started last February, has been making waves for its inventive modern Singapore cuisine in Taichung.

Linm, who is a fellow Singaporean, is known for using Taiwanese produce, such as magao pepper from Hualien, vegetables and seafood, in his Singapore-inspired dishes. Lim worked in French fine-dining restaurant, Le Moût in Taichung for close to eight years.

In a similar vein, Han launched his “new expression of Singapore cuisine” in a menu revamp with a locavore focus in May. Most of the dishes are made with locally sourced produce, such as fish, chicken and honey. His dishes include Uncle William’s Quail that comprises satay espuma, muah chee, pearl onion and chicken rice that comes in a shape of a jiaozi dumpling.

After Han’s stint at JL Studio in last month, Lin is returning the favour with a Mod-Sin 2 Ways menu on Wednesday and Thursday at Labyrinth.

Here, we invite the duo to talk about their upcoming collaboration, and what they think about each other. 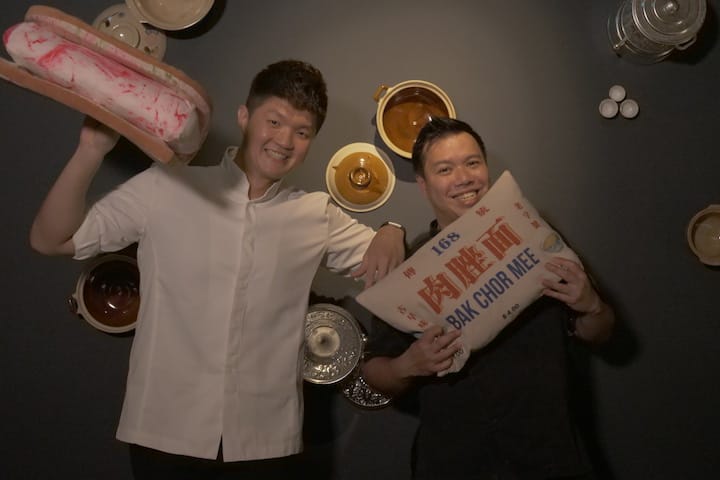 What do you think about four-hands collaborations in general?

Jimmy Lim: Four-hands collaborations are a way of building friendships among chefs as we acknowledge each other’s cooking philosophy and direction. We can exchange our views and knowledge on food. It is also a good opportunity for my team to have a new kitchen experience.

How do you usually select your four-hands partner?

Han Liguang: When you travel to another country to cook, you have to see the person every day and all the time. That’s why it’s important that both chefs get along. I also want to learn different techniques and ways of presenting a dish. There has to be an underlying respect for each other’s cuisine. Four-hands collaborations are not a commercial thing. I am happy even if I don’t make money from it.

It is almost like a wedding dinner. Both chefs would go around the restaurant to chat with diners, so you better make sure that you’re good with the other guy.

Jimmy Lim: Food and people are closely interrelated. It depends on the chemistry that I share with the chef. The first time I chatted with Han, I realised that we share the similar values inside and outside the restaurant.

What do you think about your four-hands partner this time?

Han Liguang: If I could think of a Singapore dish that represents Jimmy, he reminds me of a char siew. He is a tough big guy and he likes to grill food — he has a special barbecue pit in his kitchen. Like the burnt and hard exterior of char siew, he may seem tough outside, but he is hardworking and gentle, like the soft and juicy meat. When you get to know him as a friend, he has various layers to his personality.

Jimmy Lim: For me, Han is like a bowl of bak kut teh. He is down-to-earth and warm. However, he is still very substantial and has cooking knowledge that is as solid as pork ribs. But his way of expressing his thoughts is as straightforward as the kick of spice that the broth delivers. 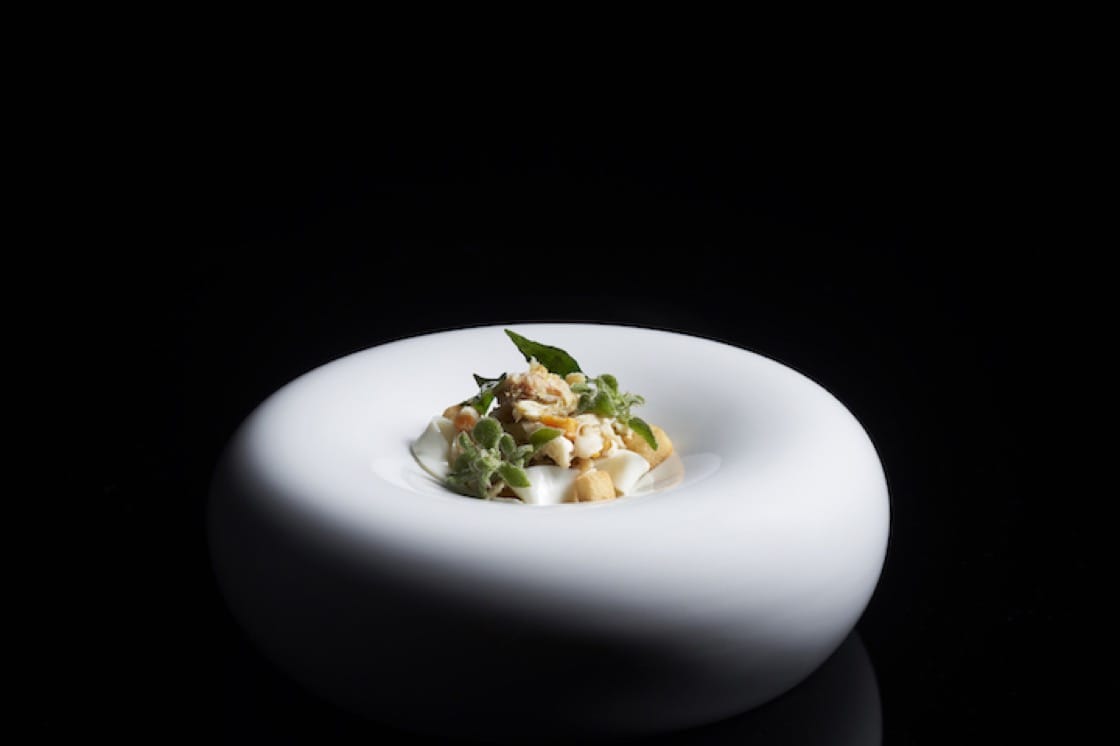 Labyrinth's Local Wild Caught Crab is one of the dishes on the Mod-Sin 2 Ways menu. (Credit: Da Photography)
Share with us about the four-hands menu?

Han Liguang: I want to give diners a different perspective on what Singapore cuisine can be aside from hawker food. For me, I am creating a new way of expressing Singapore cuisine that veers away from traditional flavours but it is still based on tradition and memories.

In this menu, I am presenting new versions of my dishes — satay quail, sorbet made with locally -sourced dark soya sauce and chocolate, and served with ma lai gao. Another new dish is claypot sushi — sushi made with burnt rice crepe and home-cured Chinese sausages.

Jimmy Lim: Through this collaboration, I would like to showcase unique Taiwanese produce to diners in Singapore and share my food memories. For example, I am cooking seafood hor fun, which is one of my favourite hawker food.

Another dish is inspired by mala hotpot, which is a popular dish in Taiwan. The dish has shabu shabu-style Hokkaido wagyu striploin that is served with beef-fat-infused rice. I also hope to share my perspective on modern Singapore flavours to diners here. 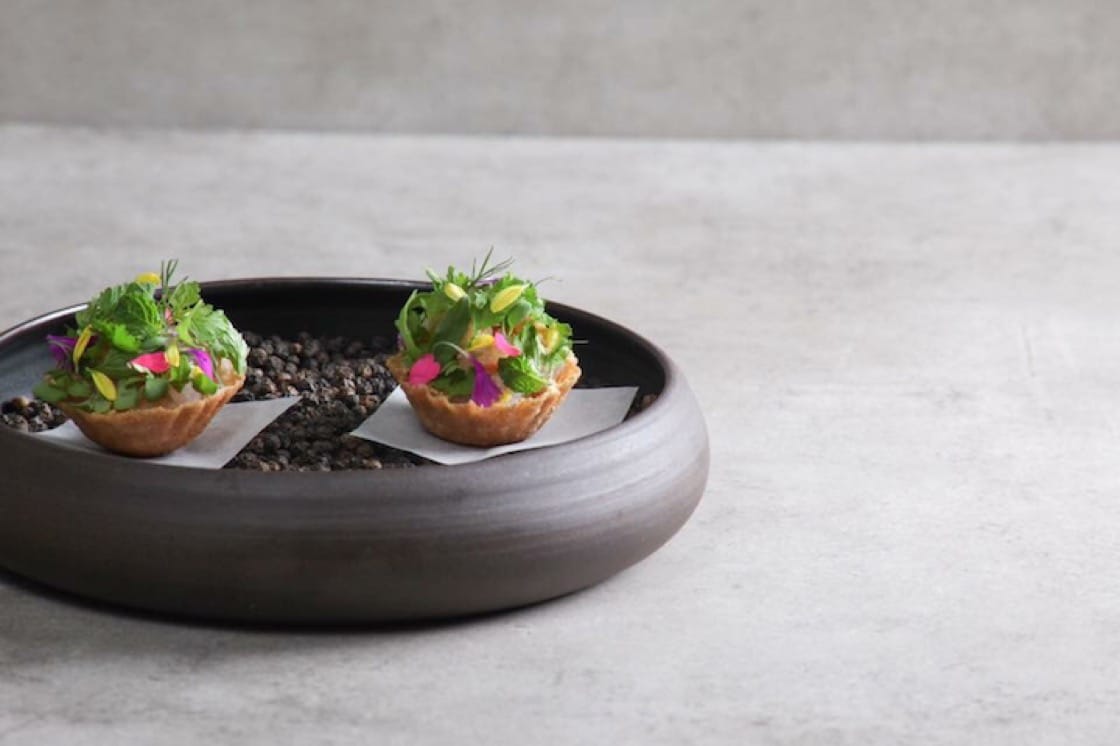 What are some of your favourite Singapore dishes and what dishes do you hope to put on your menu?

Han Liguang: Hokkien mee in a takeaway packet. The noodles must have been soaked in gravy so when you open the packet at home, they are still warm and have rich flavours. I also like bak chor mee, nasi lemak and sugarcane juice. I am working on my version of sweet and sour pork by using different ingredients to evoke the taste and fragrance of the dish.

Jimmy Lim: I grew up with curry fish head as that was a signature dish in my father’s restaurant and it is difficult to find this dish in Taiwan. I also like nasi biryani as it has a rich mix of spices. I would like to make my version of cereal prawns, as it is not easy to find the same type of cereal in Taiwan.

One tip for guests to enjoy this four-hands collaboration to the fullest?

Han Liguang: It is about having an openness to try new dishes that are not on the usual menu, enjoy the flavours and have a conversation with us.

Jimmy Lim: Come with an open mind to enjoy this meal.

More details on the Mod-Sin 2 Ways collaboration on 25 & 26 September can be found here.
Advertisement
Advertisement