When Mexican chef Karime Lopez was in Singapore to helm a two-month-long Gucci Osteria pop-up restaurant that ended last month, she found an unexpected source of comfort — dan dan noodles. The moreish Sichuan dish has noodles tossed in a spicy sesame paste sauce and minced pork.

The head chef of Gucci Osteria, which is permanently located in Florence, Italy, recounts that dan dan noodles reminds her of encacahuatado, a traditional Mexican dish of chicken drenched in a spicy sauce concocted with guajillo chilies, chipotle chilies and peanuts.

Lopez says: “ I am so addicted to dan dan noodles that I can eat it four times a week. It's such a comforting dish with sweet, sour, salty flavours all in a bowl.”

She also went on an eating spree, having ticked most of her go-to places to eat and drink, such as one-MICHELIN-starred Peranakan restaurant Candlenut, Keng Eng Kee, a MICHELIN Plate seafood restaurant, Swee Choon Dim Sum Restaurant and Ng Ah Sio Bak Kut Teh Restaurant. 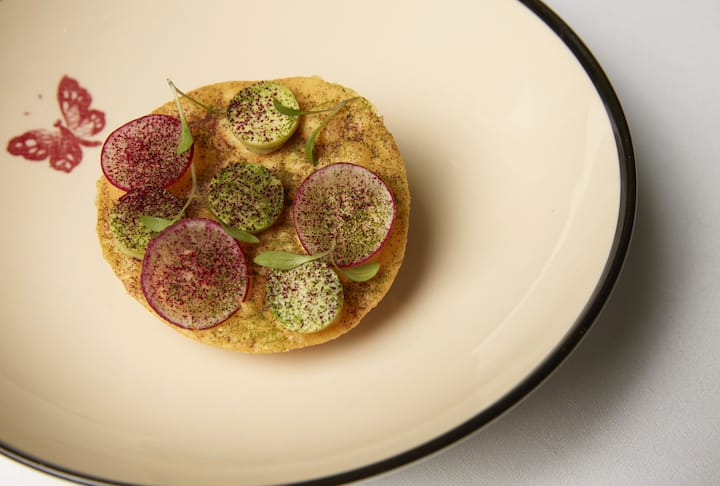 Chef Karime Lopez brings in her Mexican heritage by introducing a tostada into the menu. (Photo: Gucci Osteria)
Having cooked in Spain, Japan, Peru and Denmark, Lopez’s palate transcends international boundaries. Since January last year, she has been cooking contemporary Italian cuisine at Gucci Osteria da Massimo Bottura, the feted restaurant collaboration between the Italian fashion house and the maverick chef from the three-MICHELIN-starred Osteria Francescana.

In May, Gucci Osteria made its international debut in Singapore, serving dishes such as The Crunchy Part Of The Lasagna, a Bottura signature, and new dishes such a sweet and sour pork belly bun christened Taka Bun, which is named after Lopez’s husband, Takahiko Kondo, who is also the sous chef at Osteria Francescana. Newly created dishes include the uni crab tostada and Charley Marley, a chocolate and hazelnut bar filled with kaya. The dishes were served on botanical-themed Gucci Herbarium crockery.

Over the past decade, the 36-year-old chef has chalked up an impressive resume, having worked in MICHELIN-starred restaurants such as Noma in Copenhagen and Nihonryori RyuGin in Tokyo, and other places such as Central in Peru and Can Fabes in Spain. Prior to her latest role, she wrote and tested recipes for Bottura’s book, Bread Is Gold. Bottura was so impressed by her that he offered her the top position at Gucci Osteria.

We catch up with Lopez on how her globe-trotting career and exposure to a vast spectrum of cultures have influenced her cooking.
Advertisement
Advertisement
1. You had quite an eating spree around Singapore. What are some of the local flavours and dishes that have inspired you?

I like bandung (a rose syrup and milk beverage), as it is sweet and floral, and can be easily incorporated into desserts, and I love its colour. I also love gula melaka that is found in so many food here such as ondeh ondeh and drinks. Gula melaka has a lovely sweet and roasty flavour. The Coffee Pork Ribs at Keng Eng Kee Seafood Restaurant is an amazing and authentic dish, with both sweet and savoury flavours. The food in Singapore is similar to Mexican food as some dishes have sweet, sour and salty flavours all at once.

2. You cook Italian food but how does your Mexican heritage come through your food?

One of the biggest ways is through having tostadas on the menu at Gucci Osteria. Italians also use a lot of corn in their cuisine. It is interesting how different cultures develop different products from the same ingredients. Take corn as an example. Corn tostada is big in Mexico, polenta is common in Italy, while talo is popular in the Basque Country.

3. How has travelling around the world inspired your cooking?

The more I eat around, the more I enrich my palate and experiences as a diner too. I also get to see how other chefs interpret the same dishes. You have to see more and eat more, and be more open to new experiences. Cooking in different countries is also challenging as you have to adapt to the different seasons. In Italy, there are amazing ingredients, but they are available at different times of the year, so you always need to listen to the producers for their insights. 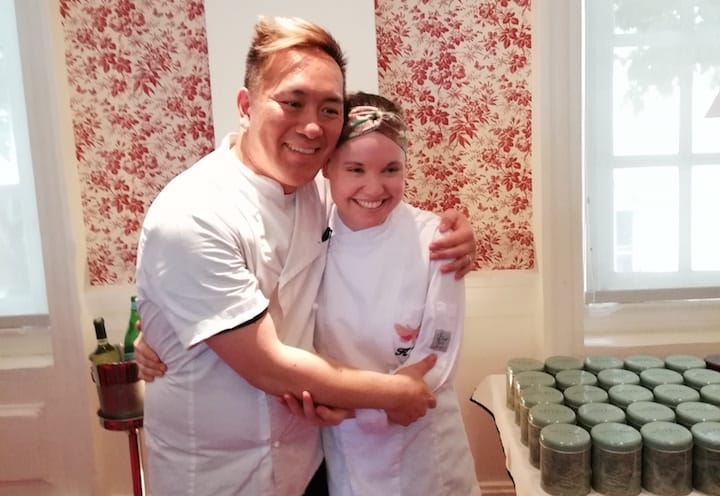 Chef Karime Lopez (right) and her husband, Takahiko Kondo, who is the sous chef of Osteria Francescana. He followed Lopez to cook at Gucci Osteria in Singapore. (Photo: Kenneth Goh)
4. How did your interest in cooking start?

I was planning to study plastic arts in Paris and spent a year studying French there, and took up courses in sculpting and painting. During my time there, I was amazed by patisseries in France and how making confections and cakes is somewhat like an art form, just like doing sculptures. It was then that I decided to switch to culinary studies and moved to Spain to attend culinary school.

5. You have cooked with top chefs around the world. What are some important lessons that you have learnt from them?

Working under chef Seiji Yamamoto of RyuGin, I learn how to respect the long history behind Japanese ingredients. The late Santi Santamaria shared a lot and had a knack for building teams. He would even read books on the history of culinary arts to us while we were doing mise en place.
Advertisement
Advertisement