Passing Down The Love For Food

Even in a city where new, trendy restaurants mushroom up every day and we are spoiled for choice when it comes to world cuisines, there are some places that will always hold a special place in our hearts—the nostalgic restaurants our parents brought us to as children to celebrate important family occasions, a grandparent’s birthday, Lunar New Year.

We meet the families behind three such restaurants whose reins and time-honoured recipes have been handed down from generation to generation, preserving the taste of local heritage cuisine.

The man behind Good Chance Popiah is larger-than-life 98-year-old Hor Chim Or who incidentally, published a memoir in March this year chronicling his life as a former Singapore national basketball player, pioneer Peking opera singer and restaurateur. 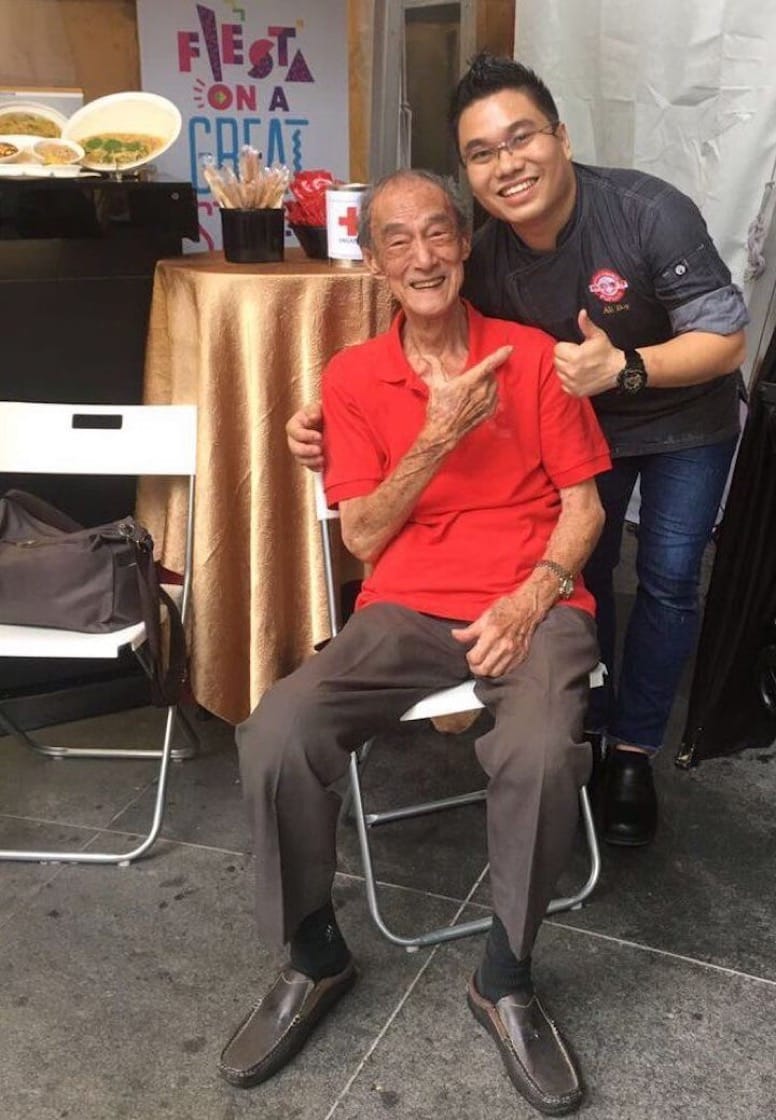 Hor went into the restaurant business in 1977 when he and his wife started selling popiah using his mother's recipe. Today, there are two restaurants - one in Jalan Besar, the other in Jalan Bukit Merah - which are managed by his grandchildren.

Sprightly at 98, Hor is still an active figure in the business, even personally going down to run the restaurant’s booth at the Fiesta On A Great Street festival in April.

There is no secret to a good popiah, says third-generation owner and Hor’s grandson Boon Kaichun.
Advertisement
Advertisement
40 years and three generations later, the taste of Good Chance’s popiah has remained unchanged from the time that his great-grandmother made it in the Fujian province of China. “I learnt every step from my grandfather. Everyone knows what goes into popiah, but not many realize that every step of preparation is a skill unto itself, from frying the beancurd to getting the texture of the vegetables just right,” says Boon.

Not satisfied with mastering the basics, Boon has since then also introduced new ingredients that reflect the changing times and tastes of young people today like XO Chinese sausage, prawns and crab meat. 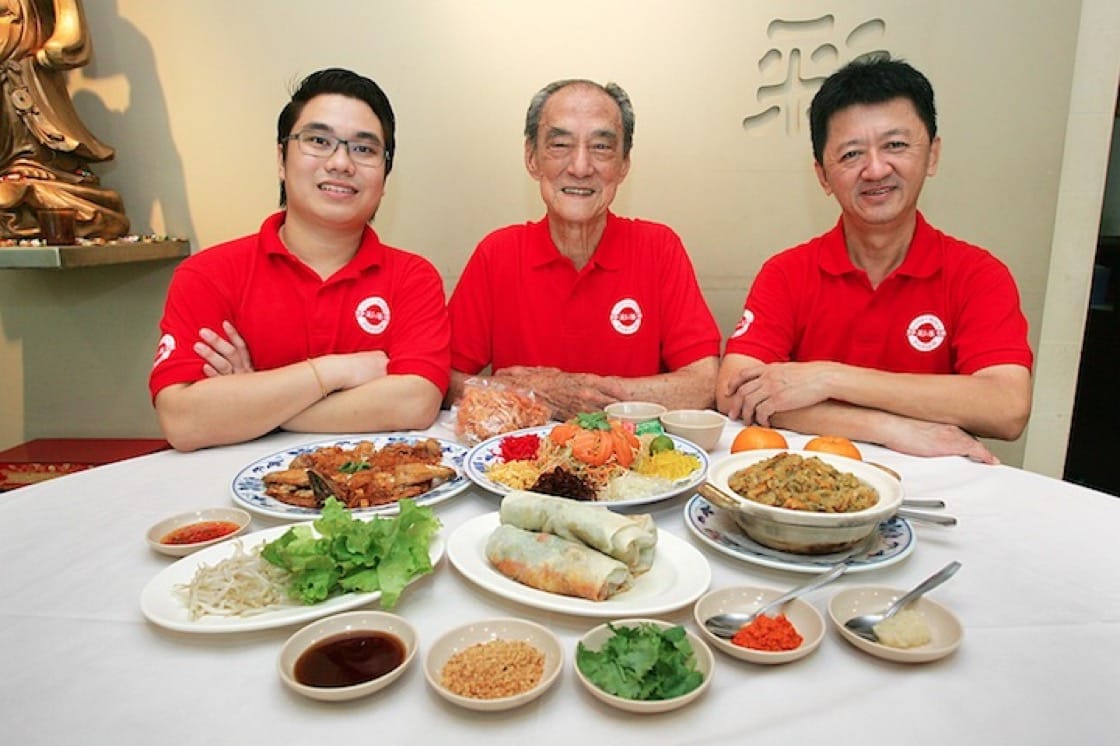 The story of Keng Eng Kee Seafood begins in the 1950s, when a young Hainanese couple Low Peck Yah and Koh Yok Jong arrived on the shores of post-war Singapore. Armed with nothing but their culinary skills and steely determination to carve out a new life together, they set up a stall on Old Havelock Road, dishing out authentic Hainanese chicken rice to the local community.

In the 1970s, they opened another stall on the same road selling zi char, and left the running of the new stall to their eldest daughter Koh Liang Hong and their employed chef, Liew Choy. As business grew, so did their affections for one another and eventually, they got married. 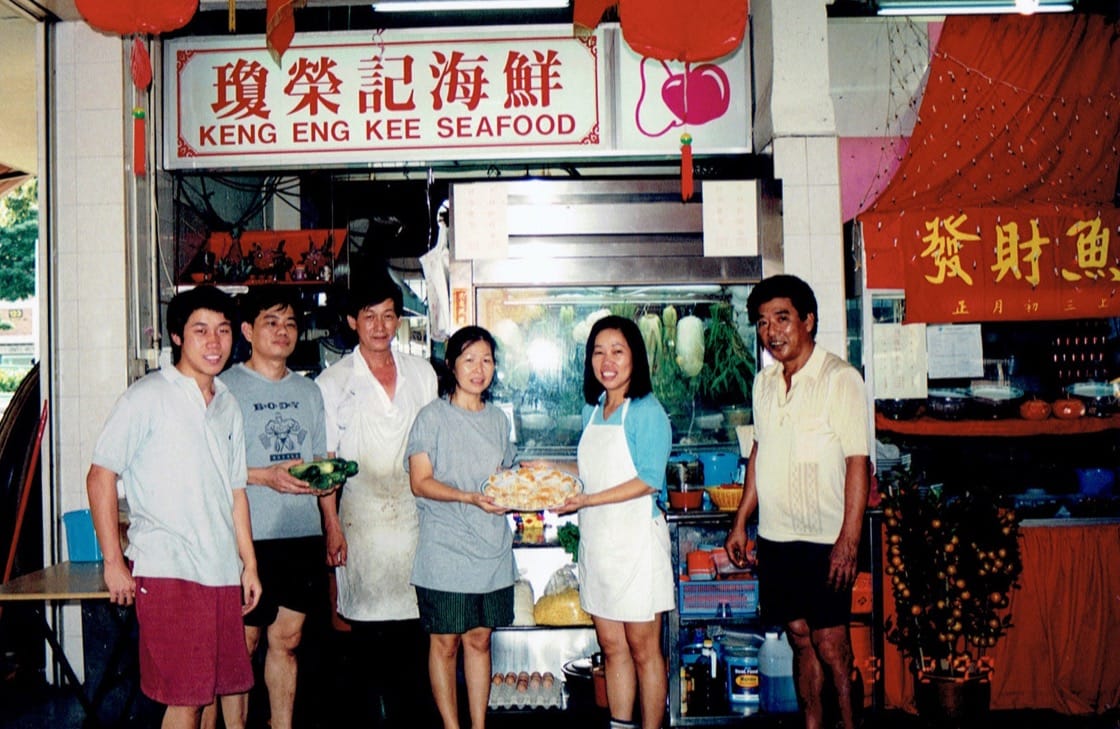 The second and third generation owners of Keng Eng Kee
Today, the kitchen is helmed by the couple’s younger son, Wayne Liew, 30, who began his foray into cooking at the age of 19. He says: “Although all the kids in our family grew up helping out in the kitchen, it was very challenging actually learning how to cook the restaurant’s dishes. I was also very young at that time and it was difficult to get the affirmation of the more senior cooks there.” 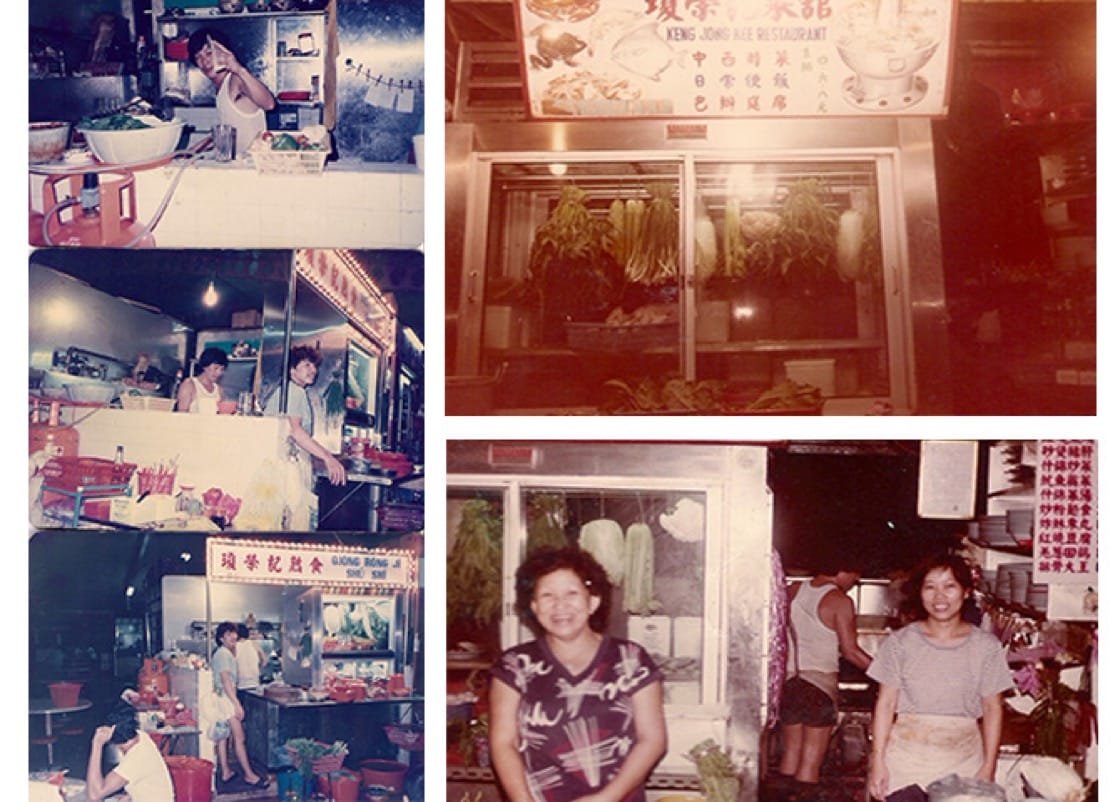 Images from Keng Eng Kee’s original stall at Havelock Road
Wayne was 26 when he took over as head chef and even as he preserves his family’s recipes, he is constantly looking to innovate and adapt to the tastes of the younger generation today. “People these days pay more attention to health so I have had to change some of my cooking techniques to reduce oil and salt. I also get inspired when I travel and created new dishes like the Coffee Pork Burger,” he says. And Wayne’s efforts have certainly paid off after being recommended in Singapore’s Michelin Guide for two years running. 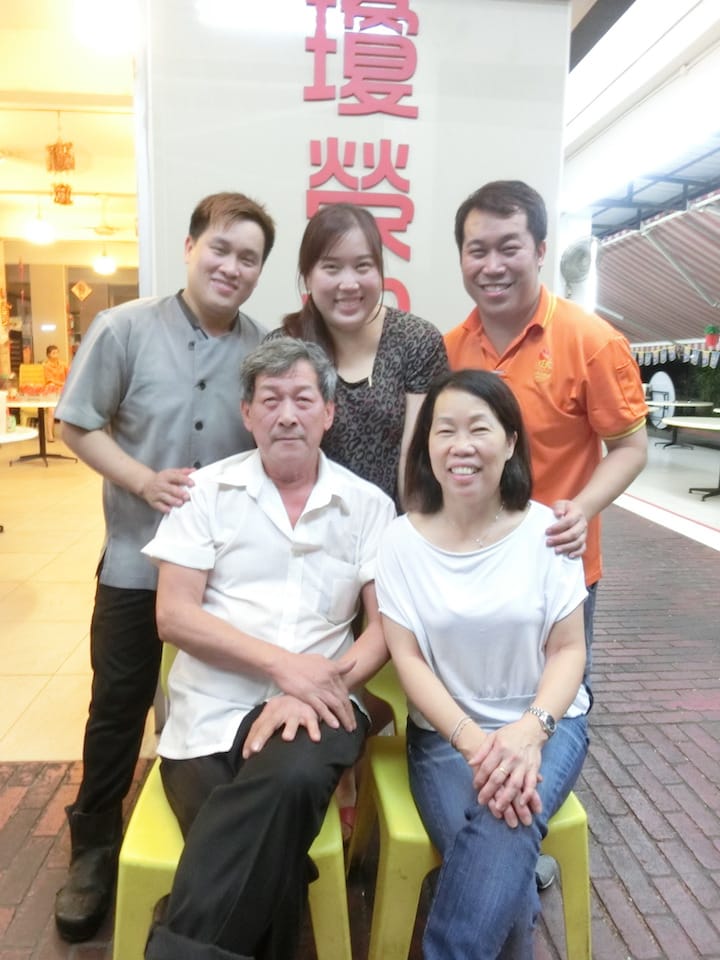 Keng Eng Kee is still a family business through and through, and the front of house is currently run by eldest son and operations manager Paul Liew, 35 (top row far right) and their sister and manager Geraldine Liew, pictured here together with their parents.

Wayne says: “We are very fortunate to be able to run this restaurant as a third-generation family business, for this we are thankful to our regulars who have patronized us over the years.”

Mention Kim’s Place and anyone in their fifties would probably recall legendary “Hokkien Mee Master” Tan Kue Kim frying up his signature dish in a long sleeve shirt and Rolex watch. He in turn, learnt his skills from an older cousin in the 1960s before setting up his own stall at Changi Road in 1971.

In 1984, he expanded his business beyond Hokkien Mee, introducing dishes like Sambal Kang Kong, Black Pepper Crab and Spicy Bean Sauce Steamed Tilapia to his zi char stall. In 1988, his son Tan Hock Yong began helping out in the kitchen and learning the tools of the trade as business took off. 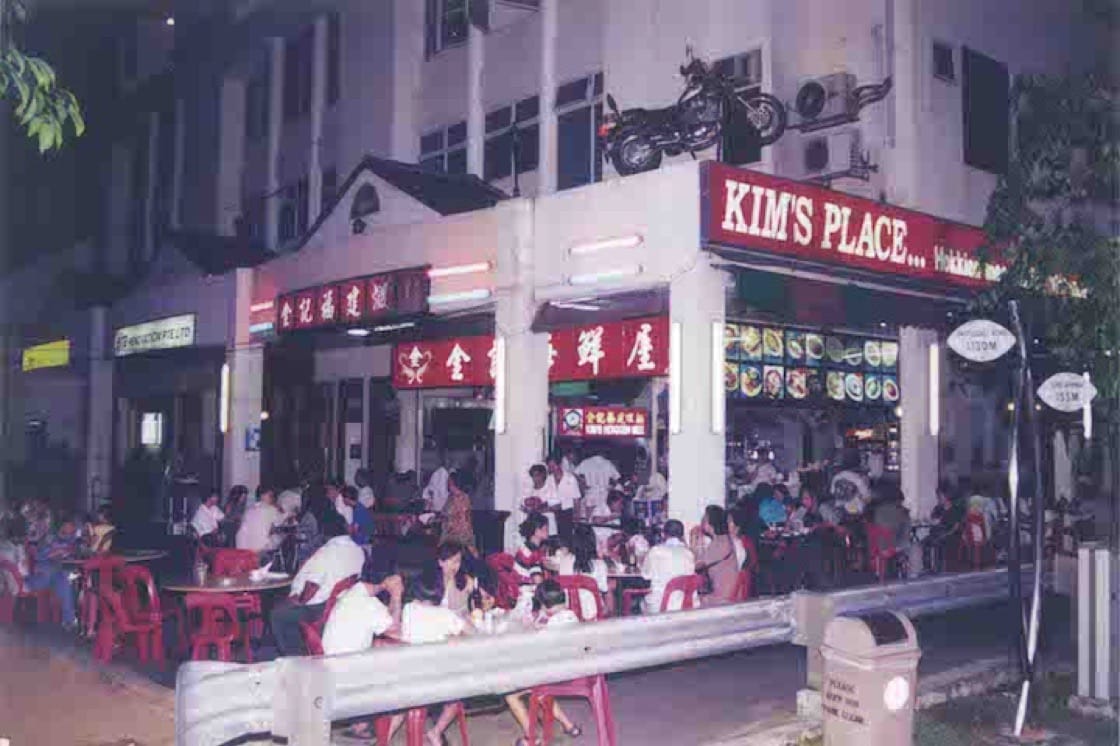 Kim's Place has more than 40 years of history
Then only 17 years old, Hock Yong recalls how physically tough the work was in the kitchen. He would be frying up about 7 kilogrammes of noodles at any one time. “The worst part is that you were frying the noodles right in front of the customers. I was always afraid of making mistakes, or being compared to my father. It was a steep learning curve but the practice was so intense, I picked up the skill in a very short time,” he says. “My father was also very encouraging, and this gave me more confidence.” 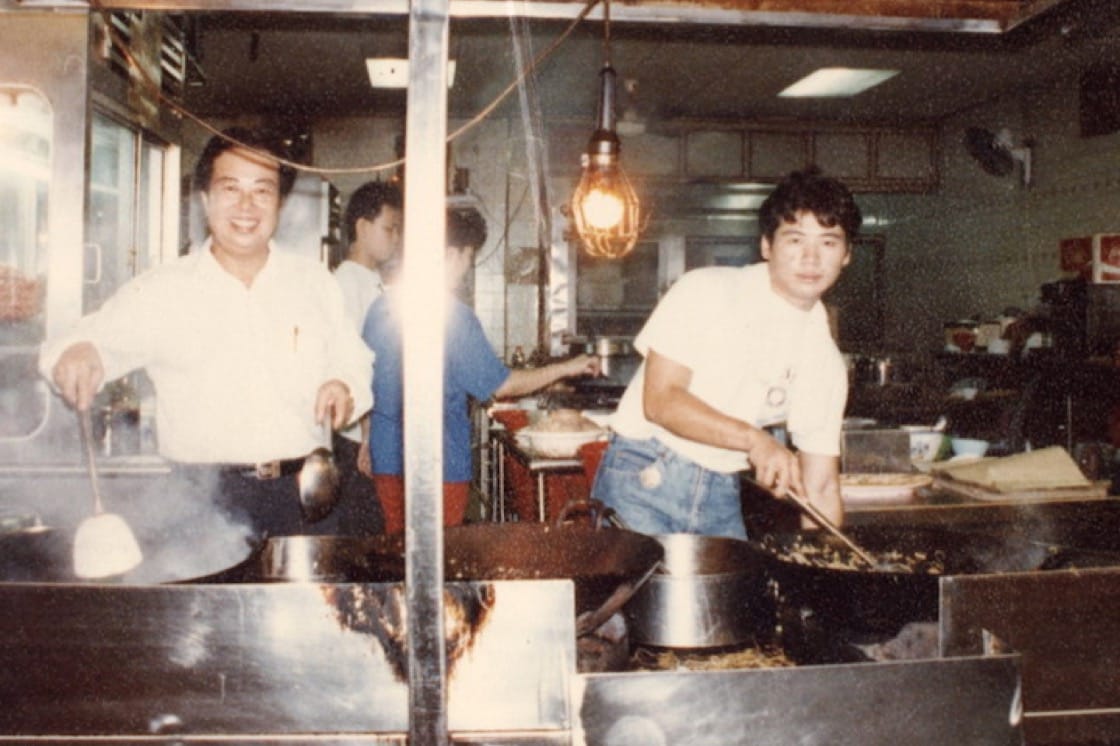 Kim’s Place founder Tan Kue Kim (left) and his son Tan Hock Yong.
Because of his experience, when his own son Bryan Tan wanted to step up to the plate, Hock Yong decided to let him start at the front of house rather than the kitchen. “I didn’t want to scare him away,” he jokes. The real reason though, was that he felt that his son would understand the cooking better after getting to know the customers. 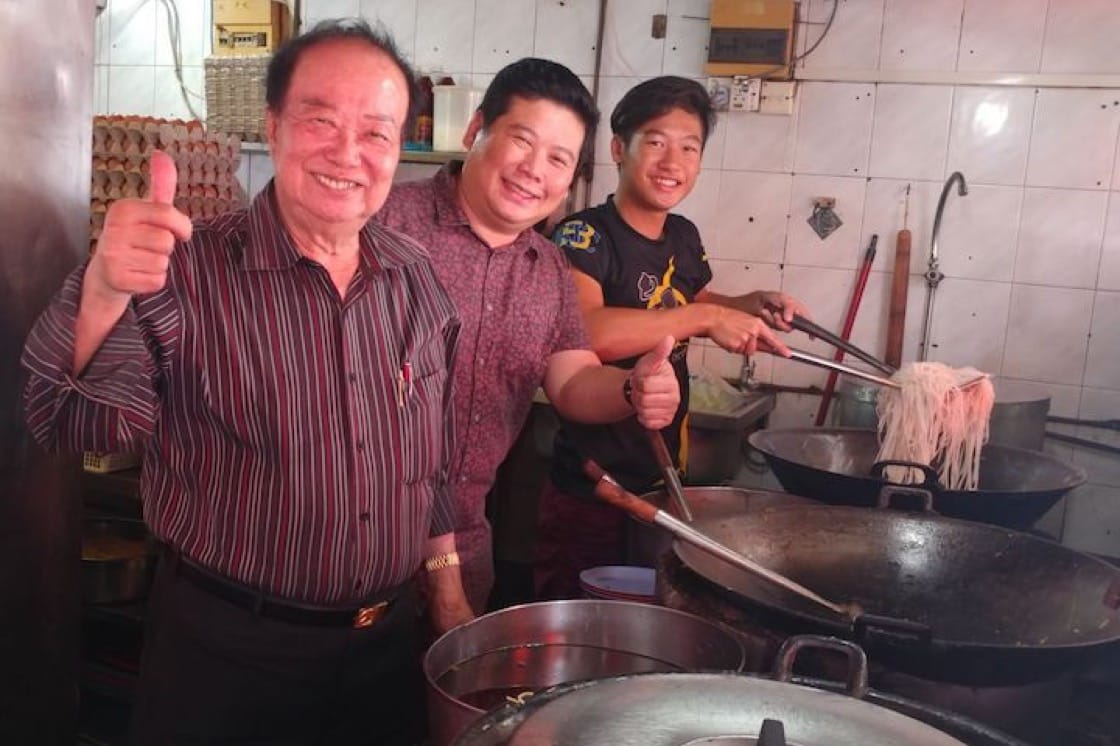 The three generations of Kim’s Place
With Hock Yong at the helm, the business grew rapidly and in 2003, the restaurant moved to a larger premise at Joo Chiat Place and he further opened another five branches in the heartlands including Tampines and Serangoon, with plans for expansion to the west of Singapore.
This article was written by Tang Jie and translated by Rachel Tan. Click here to read the original version of this story.
Advertisement
Advertisement