You have seen it all over your social media feeds — the browned edges of baking paper, a cake crust so charred and cracked it looks like a mistake, and finally, a knife sliding into pale yellow soufflé to reveal a creamy custard centre. Yes, it’s the Basque burnt cheesecake trend, embraced by novice home bakers and chefs of MICHELIN star restaurants alike.

This rustic looking cheesecake originates in Basque Country and is said to have been created in 1990 by chef Santiago Rivera of La Viña in San Sebastian, Spain. While the original recipe only calls for five ingredients — cream cheese, heavy cream, sugar, eggs and flour — countless variants have popped up.

Aitor Jeronimo Orive, chef of one MICHELIN star Basque Kitchen By Aitor in Singapore, swears by the rendition served up at one MICHELIN star restaurant Zuberoa in Basque Country. “It’s something quite common in our culture and there are many variants. For me, one of the best is made by the great Hilario Arbelaitz. But it is very satisfying comfort food regardless of which version.”

Some recipes call for cake flour, cornstarch or no flour at all, others recommend a variety of cheeses for greater depth of flavour; some bakers like their final product with a caramel crust and a New York cheesecake-like consistency, others prefer a crust so burnt it creates an umami flavour and a flowing custard centre. 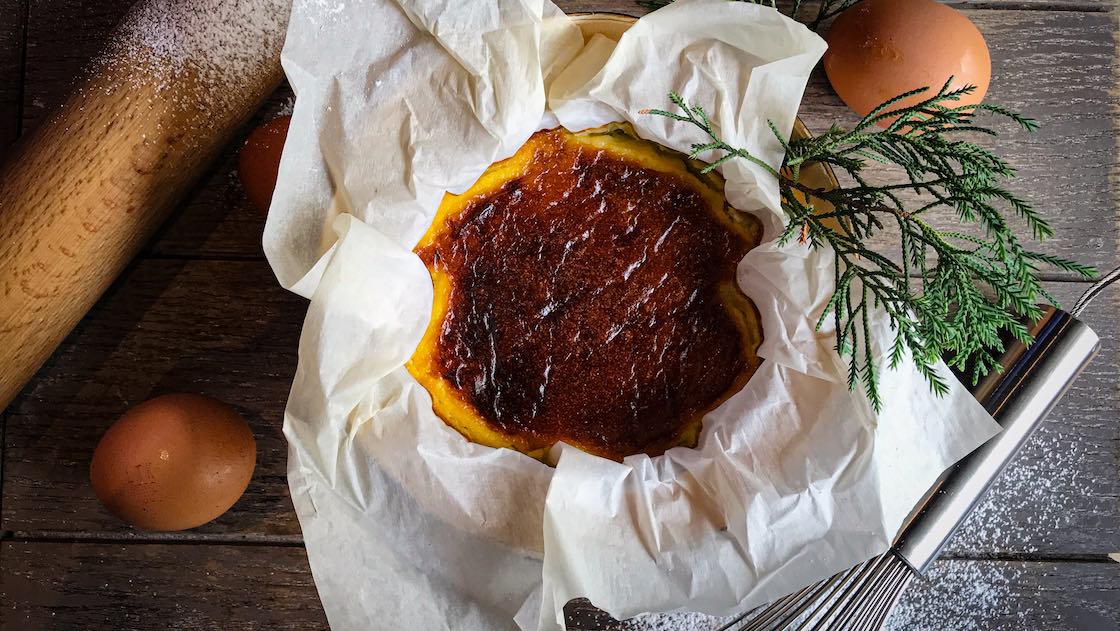 What are the characteristics of a good Basque burnt cheesecake to you?

AJO: This is personal preference as some people like firm cakes, some like runny ones, some prefer more colour or less. We decided we wanted to make a rich yet light cheesecake with a lot of umami so at Basque Kitchen, we created a hybrid between the airy Japanese cheesecake and the Basque baked version.

KY: For me, it is the full-bodied cheese complemented with light sourness from lemon that makes the taste, and a must is the browned colour on the surface.

NJK: To me, a good Basque cheesecake should have a good texture. It should not be overcooked and the contrast of the burnt surface and soft interior mixture should be nicely balanced. If it’s too burnt, it will be bitter.


What kind of flour do you use?

AJO: We use a combination of flours, one of them being corn flour to make the cake a bit lighter.

NJK: No flour was used. After trying seven or eight times, I realised that if we don’t use any kind of flour, the final soft and velvety texture is more to our preference. As cream cheese already has some amount of gelatin, adding flour seemed to make the cake harder than the texture we wanted. 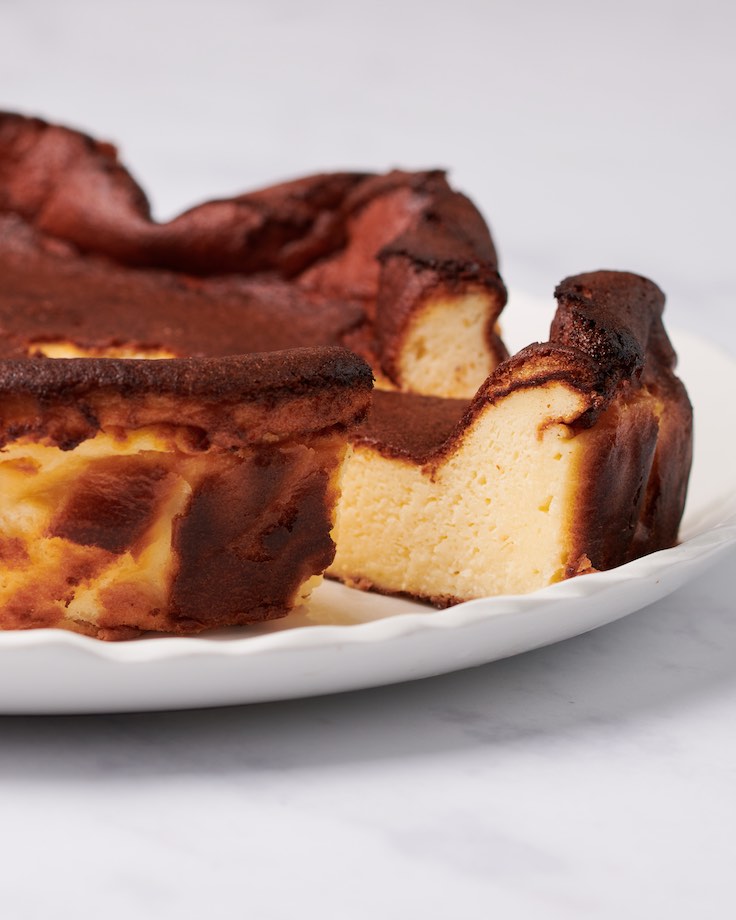 What kind of cream works best?

KY: The cream we use is French fresh cream.

NJK: We use normal whipping cream, a good quality cream with around 42% fat to give the rich flavour. You can mix it with some milk if you want it a little bit lighter.

What combination of cheeses do you recommend?

AJO: On the cheese front, you can use what you like. Blue cheese can be a good option as it will give the cake more taste. We use Idiazabal cheese, it is produced in the Basque Pyrenees and is made from the milk of an indigenous breed of sheep called latxa. This cheese is also smoked which gives the cake an even better taste.

KY: We use French cream cheese and parmesan cheese which gives a good balance of saltiness.

NJK: Initially, we used only cream cheese and brie, but I spoke to chef Haikal Johari, and we realised that the flavour needed to be a bit stronger and more prominent, so we decided to add Italian Gorgonzola to perk up the flavour a little bit. We use brie or camembert, cream cheese and gorgonzola, but the flavour of the blue cheese is very mild and only comes through at the end.

Do you rest the batter before baking?

KY: At Beni, we let the dough rest for a day before baking.

NJK: After mixing all the ingredients carefully, I would strain the mixture and let it rest for about two hours to let all the bubbles settle down. If you don’t, the cheesecake will become very crumbly and the texture won’t be as smooth. 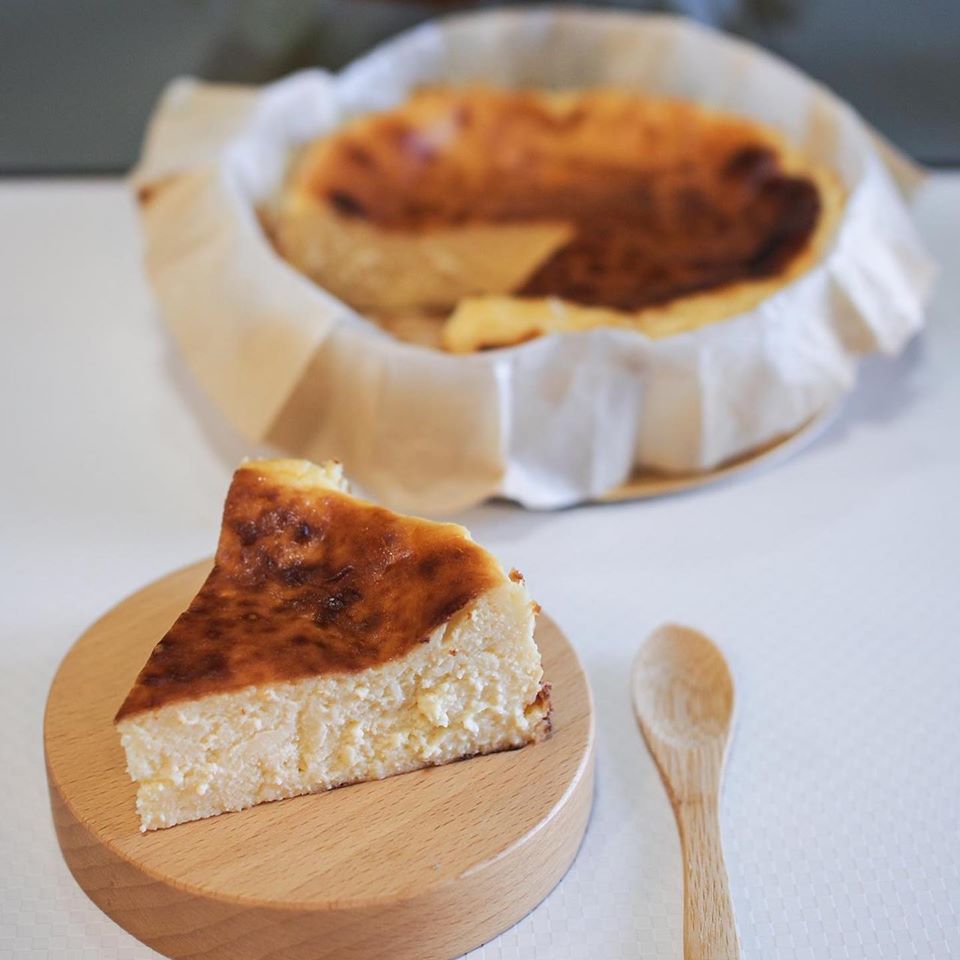 Do you have any tips for baking?

KY: I recommend letting the batter rest for a day and then baking it in the oven at 250 degrees Celsius for about 15 to 20 minutes. You need that high temperature to create the Maillard reaction which increases the caramel scent and umami taste. You might need some trial and error to get the right timing for the doneness which is rare inside, like making custard pudding.

NJK: At Alma, we bake our cheesecakes at 190 degrees Celsius for about half an hour. After baking, we let it rest in the chiller for one whole night to let the cake set.

What’s the best way to enjoy a Basque Burnt Cheesecake?

AJO: I don’t recommend eating it warm or hot but chilled instead. I would not put it in the microwave, but I recommend leaving it outside at room temperature before eating if it’s been kept in the fridge.

KY: I would recommend enjoying it after cooling it down in the refrigerator.

NJK: People may want to heat up the cheesecake, but I think it is best eaten when it is really cold. After taking it out from the chiller, leave it outside at room temperature for about five to eight minutes so you can taste the full flavour of the cheesecake, which you might miss if it is too cold.