At the recent MICHELIN Guide Hong Kong Macau 2020, contemporary French restaurant Louise took home a star after being open for merely half a year. The audience went wild with applause as its executive chef Franckelie Laloum received the recognition from Gwendal Poullennec, the International Director of the MICHELIN Guides.

An emotional Laloum said that moment was the culmination of a determined effort over the past 25 years.

The son of bistro owners, Laloum spent his childhood in Provence, where he "practically grew up in the kitchen". But unlike many second-generation chefs who credit their family businesses for their early love for food, he had no such interest.

“My parents worked for many hours every day. It was really tough. Of course, I was also rebellious, and thought that if my father is a chef then I have to do something else," he confessed.

His hesitance to put on a toque did not last, however. When Laloum turned 16, he was struck by an urge to become a chef.

“All of a sudden, I changed completely and I couldn’t say why it happened,” he recalled.

Despite his late embrace of the family livelihood, he was determined to get up to speed.

He enrolled in culinary school and put in the effort to learn on the job, by juggling restaurant apprenticeships between classes. To broaden his skills, he alternated between roles in the main kitchen and the pastry kitchen. He persisted with the demanding routine for three years, and graduated with a lofty goal: to work in the country's best kitchens. To a French chef, that means a MICHELIN-starred restaurant.

READ ALSO: What the MICHELIN Inspectors Say About Louise 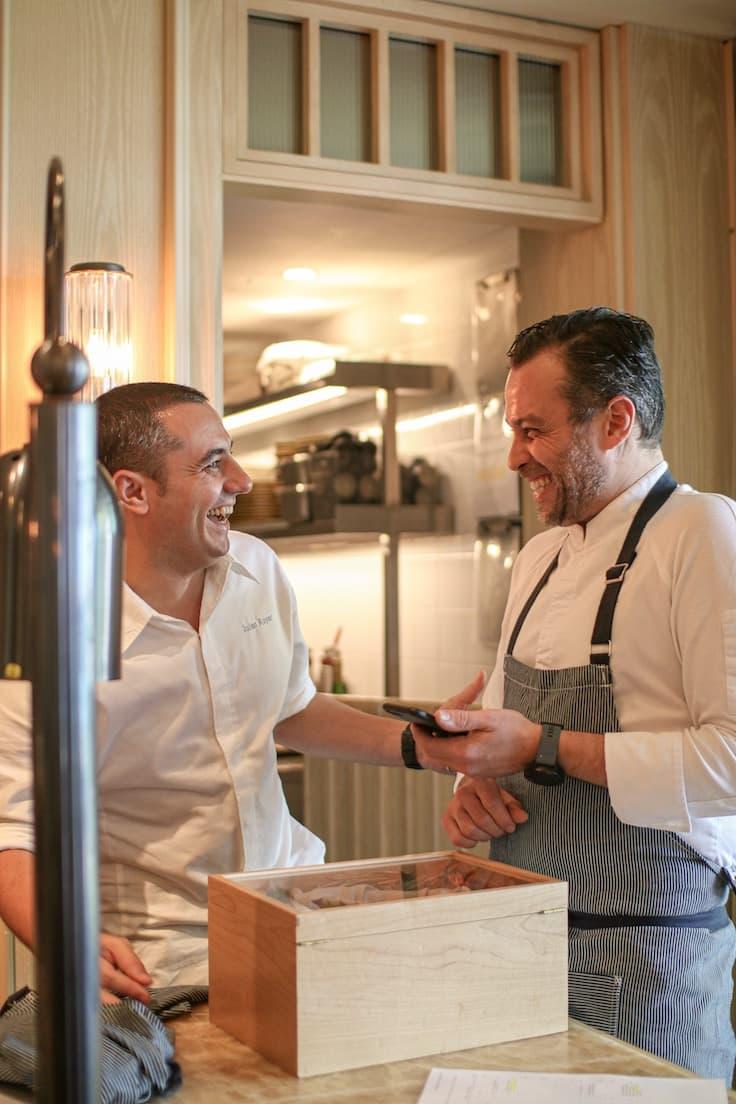 Julien Royer (left) and Franckelie Laloum met at an event in 2013 and stayed good friends ever since. (Photo: Louise)

The ambitious young Laloum convinced a restaurant owner he worked for at that time to introduce him to renowned French chef Christian Le Squer, who was then leading Parisian dining institution, Pavilion Ledoyen. While working under Le Squer, Laloum got to experience the precious moment when the restaurant achieved its third MICHELIN star. Following that, he kept challenging himself to push for similarly superlative standards at other MICHELIN-starred kitchens such as Troisgros, La Palme d’Or and Villa Archange. He reached the pinnacle of his career at Maison Pic, where he helped the restaurant to take home three MICHELIN stars as its chef de cuisine.

After that, Laloum veered East to further develop his career: he first ventured to Shanghai to manage modern European restaurant Jade on 36 at Pudong Shangri-La East Shanghai and later joined The Ritz-Carlton, Tokyo as executive sous chef. The job required him to split his attention between all-day dining and fine-dining. As a chef who has built his career in fine-dining kitchens, he wasn’t thrilled about it at all, he admitted

“I was very reluctant to make dishes like hamburger. For sure, it was the wrong attitude. I’m glad that I had the experience of casual dining, which helps shape the way I run Louise,” he said in hindsight.

Before he joined Louise, he worked at luxury hotel Rosewood Hong Kong, but had a hard time fitting in. When chef Julien Royer, who is his good friend as well as co-owner of three-MICHELIN-starred Odette in Singapore, offered him the executive chef role at Louise, he jumped at the opportunity.

According to Laloum, he and Royer share much in common: both were born in France, have lived in Asia for a while and hold the same ethos towards cooking, which is to serve simple, delicious food using quality ingredients and traditional, homely cooking techniques. He took up Royer's proposal instantly, Laloum said.

And the pair have achieved the goal they set for themselves. The dish that best embodies the restaurant’s spirit is the Roasted Hong Kong Yellow Chicken With Niigata Rice “En Cocotte”.

A traditional French menu would be wanting without a serve of the classic French roast chicken, but the chefs questioned if the chicken have to imported all the way from France. After a blind taste test involving 13 varieties of chicken sourced from Hong Kong and France with the help of chef Vicky Cheng from one-MICHELIN-starred VEA, everyone chose the local yellow chicken, and it became the undisputed choice for the dish. The chicken is slow-cooked in salted water and herbs for 24 hours, air-dried and roasted before it’s served to the customer.

As for the dish's accompaniment, the duo swapped potatoes for rice to reflect their experiences in Asia. Laloum uses Niigata rice, something he fell in love with when he lived in Japan, which he cooks in chicken stock and fat. Crispy chicken skin and Japanese chives are added on top as an aromatic final touch. The end result is a flavourful yet down-to-earth dish that has rightfully become the most sought-after item on Louise's menu.

“We don’t cook for the star. We want diners at Louise to enjoy the food and atmosphere. So far, we’ve built up a group of regulars. We hope they will continue to enjoy everything we offer here," said Laloum. 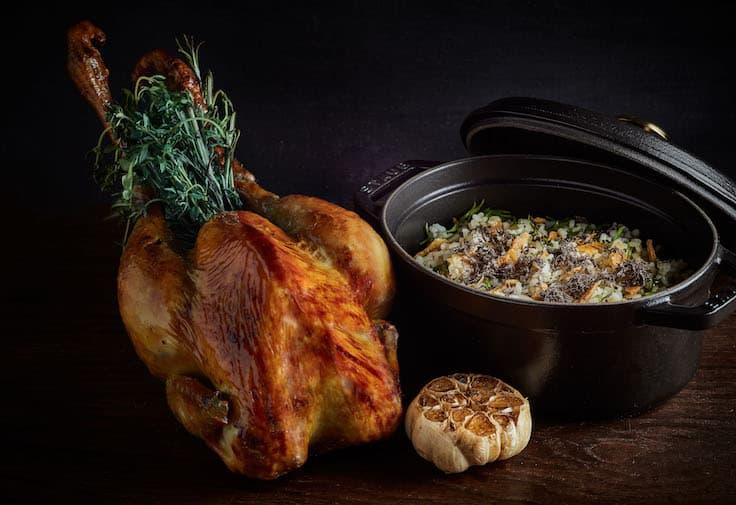 What were you thinking when Louise received the first star?
When I got the invitation to the MICHELIN Star Revelation ceremony, all the other chefs told me our restaurant would get a star. When I got to the venue, I knew that the restaurants would be called on stage according to the alphabetical order. After hearing L’Envol, I thought Louise should be up next. But they called Liu Yuan Pavilion instead. I was at the edge of my seat! But I was overjoyed the moment I knew for sure that Louise received a MICHELIN star. Running a restaurant in Hong Kong isn’t easy. I’m very thankful to the team which stayed on with me from the beginning of this journey. 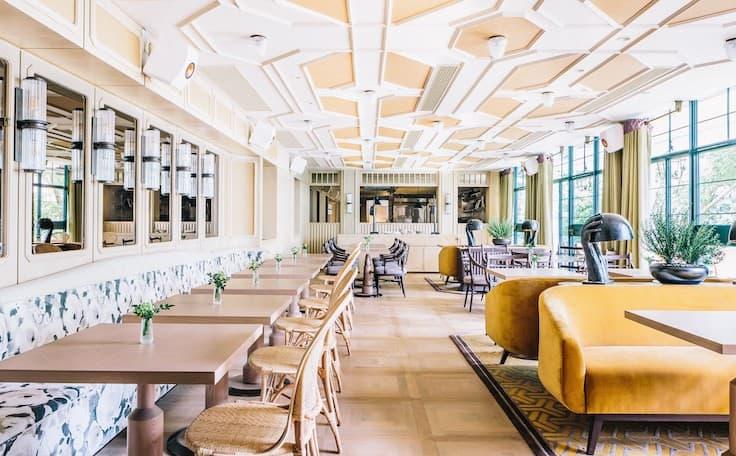 The restaurant was co-designed by acclaimed André Fu from design firm AFSO and Yenn Wong, CEO of JIA Group. It comprises a living room on the lower level, and a dining room above (pictured) that offers more refined, a la carte dishes. (Photo: Louise)

How did you celebrate?
That night, I stayed to attend the gala dinner of the MICHELIN Guide Hong Kong Macau 2020. We haven’t done a proper celebration for the star yet, but I believe we will do something to celebrate.

Will the MICHELIN star change the direction of the restaurant?
It’s not right if you change your path because of the star. We will keep doing what we believe in and we hope our customers would leave the restaurant with a smile.

Do you have any advice for young chefs aiming for MICHELIN stars?
Don’t cook for the MICHELIN star. Cook for your customers.

RELATED: Read More Stories From The "The First Day We Got Our Stars" Series