The Tottori Prefecture is located in the west of Honshu Island, the largest piece of land in Japan. The region’s north end borders the Sea of Japan; the water quality and depth there provide optimal living conditions for crabs. Because of that, Tottori reigns when it comes to the amount of crabs caught nationwide—three times more than that of Hokkaido. And no matter what variety you get, freshness is guaranteed.

Snow crab, or zuwaigani, is the most dominant crab variety in Japan, and how it is called varies according to location. In Tottori—and the San’In region it belongs to—male snow crab is known as matsuba, while the egg-bearing female crab is named oyagani. Beni-zuwaigani is another local favorite, nicknamed “the taste of autumn." But when it comes to the most sought after, itsukiboshi, the rarest, most superior type of matsuba, is simply unrivaled. 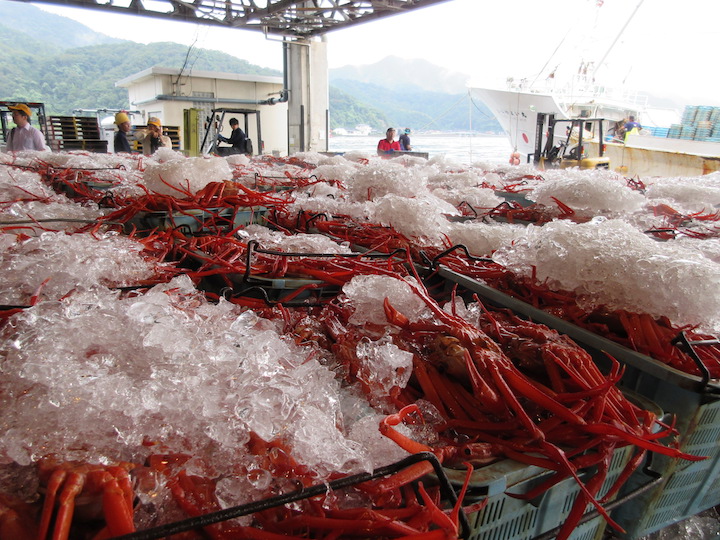 There is an endless supply of beni-zuwaigani crab in the city of Sakaiminato, Tottori from September to June.
Tasting Beni-zuwaigani

Characterized by the tall shell and flat legs, beni-zuwaigani is the most common variety of crab found in Tottori. The designated fishing period starts on September 1 and ends on June 30 the year after. This crab lives in the deep sea, and its meat doesn’t preserve well over time once ashore. Therefore, it is often used to produce processed foods. If you want to taste fresh beni-zuwaigani, a trip to Sakaiminato is a must. The city in Tottori has a local speciality called beni-zuwaigani crab rice, in which the crustacean’s sweetness and umami are accentuated after steamed en papillote with vinegary rice and other ingredients. 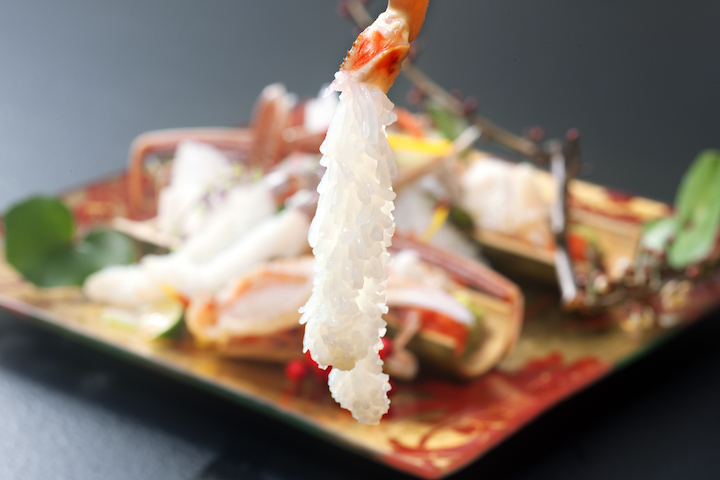 The Treasure of Winter

If beni-zuwaigani announces the arrival of autumn, the matsuba crab fully epitomizes winter’s intensity. Not only is it obtained when the Sea of Japan is at its fiercest, its meat is bursting with natural sweetness. Most diners take their time savoring every bite, letting the flavors penetrate their mouth. The peak season of matsuba lasts only from early November to early March, which further contributes to its value. Shunichi Suzuki, Director of Tourism and Exchange Bureau, Tottori Prefectural Government, described with enthusiasm how the Tottori locals enjoy the much-prized crab.

“The meat of Matsuba crab is plump and very sweet. Sashimi is the best way to preserve its original qualities. Another simple way of preparation is nabe (or, hotpot). The combination of crab and vegetables in hot broth keeps our body warm. For the smaller oyagani, it can be added in whole into miso broth, or paired with rice wine.” 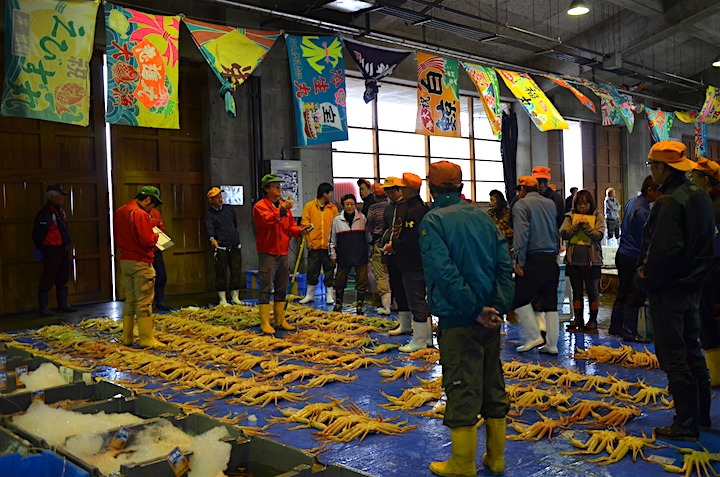 The fish market auctions happening in the cities of Tottori and Sakaiminato might seem more relaxed than Tsukiji in Tokyo but pricey deals are a usual occurrence.
The King of Matsuba, Itsukiboshi

Itsukiboshi is a brand developed in recent years marking the very best of the best. A very select few matsuba crabs meet all five of the criteria below to be labeled an itsukiboshi:

Among all the crabs in Tottori, only about 1.5% satisfies such high standards. So rare is itsukiboshi that there’s no stopping of its surge in value. Each crab cost 700,000 yen in 2016; the newest record is 1.3 million yen. 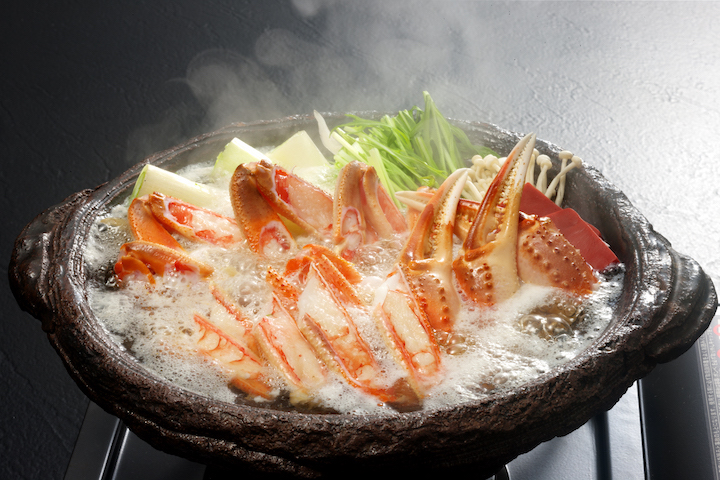 Hotpot with matsuba crab isn’t only delicious. It warms your entire body.

Yamadaya
A guesthouse with more than 200 years of history, Yamadaya is renowned for a complete holiday experience beginning with a hot spring in front of sweeping views of the sea. It is followed by an impeccable crab feast with crab sukiyaki being the star of the show. The broth, made with a secret recipe, takes the crustacean several levels up the umami scale alongside homemade ponzu. The dinner can be booked separately for those who prefer to not stay overnight.
5-5-36, 1 Chrome, Karocho Kita, Tottori City, Tottori Prefecture (15 minutes by Taxi from JR Tottori station)
Opening Hours: 4:00 p.m. - 10:00 p.m.

Wakabayashi
This venture started off as a seafood dealer in the first year of the Meiji period (1868). It takes the current shape as a restaurant when the Heisei Period (1989) began. Located next to the harbor of Tottori, guests can crack the crabs open while taking in idyllic views of a fishing village. “The prices there are very reasonable," says Suzuki. "An all-encompassing meal with crab costs only around 10,000 yen.” If dining in isn’t enough to satisfy your crustacean cravings, Wakabayashi’s retail shop also sells fresh or cooked matsuba and beni-zuwaigani crabs.
1-8-12 Karocho Kita, Tottori City, Tottori Prefecture
Opening Hours: 11:00 a.m. - 2:00 p.m.; 5:00 p.m. - 9:00 p.m. (Sundays and public holidays: 11:00 a.m. - 9:00 p.m.)

This article was written by Xiaoshan and translated by Vincent Leung. Click here to read the original version of this story.