"I am a Japanese who cooks French cuisine," Kei Kobayashi proclaims proudly.

A native of Japan's Nagano prefecture, Kobayashi grew up surrounded by food. His father was the chef of a traditional kaiseki restaurant that served multi-course Japanese haute cuisine. But the young Kobayashi's interest in food took on a different direction instead. Piqued by a documentary he watched on French culinary traditions, Kobayashi trained in a slew of prestigious restaurants owned by notable French chefs such as Gilles Goujon (L'Auberge du Vieux Puits restaurant) and Alain Ducasse (Plaza Anthénée).

Known as a virtuoso in flavour pairings and combinations, Kobayashi's dishes always emphasise perfect design with a distinct Japanese influence. His creations spotlight the quality of the produce, enhanced with his delicate touch.

Kobayashi's achievement of the third star in the MICHELIN Guide France 2020 is testament to the detail in his art: from the palate-rousing appetiser of red shiso granita enhanced with balsamic vinegar; to the delectable dessert of smoothie with exotic fruits, sugar puffs, coconut emulsion with kaffir lime and lemon zest. Or that tantalising hint of Japanese yuzu in a quintessentially French dish — such is the art of Kei's cuisine.

Fresh off the stage at the MICHELIN Guide France 2020 Star Revelation ceremony, the chef shares with us his thoughts on getting the Guide's top recognition of three MICHELIN stars.

Tell us about your story with the MICHELIN Guide.

I started this job 25 years ago. The first Japanese chef I ever worked with in France told me about the MICHELIN Guide on my second day.

What did you feel when your name was announced?

Everything just went blank in my head. I hadn't even prepared a speech. I thought it was impossible. But it happened, I came up the stage with all these master chefs, a lot of French chefs. It's intimidating.

How would you describe your culinary style?

When I was young, I was lucky, because I only ate homemade food. We never ate take-away or anything like that. You could say it taught me what "emotional" food is. So I would say: emotion, elegance, high-quality produce. 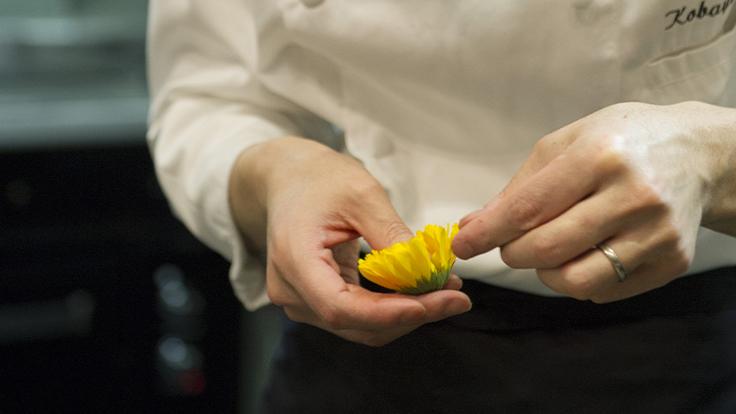 What is the one dish that cheers you up?

I'd say a good steak with fries. It gives me motivation.

What do you listen to when you cook?

In my kitchen, I like it when there is no noise, I just let the calm in. Except if I get mad, then it's a whole other story!

What is your vision of a sustainable star?

Our job is already hard. Every morning, you must stay motivated. Because now I'm at the head of the restaurant, I must also work on sales and being the boss. It's not only about cooking anymore, we must show that we are motivated and that we are a solid team.

What's your secret to avoid becoming a one-hit wonder?

The MICHELIN star is valid for one year. You must keep that in mind, and you must keep working. Everybody, the two and three stars, they all search for the same level of excellence, even the most talented ones — and there are a lot of them! If they set the bar higher and we continue doing the same thing, some day we will go back to two or one or zero stars. The star is something alive, not just something that falls in your lap. 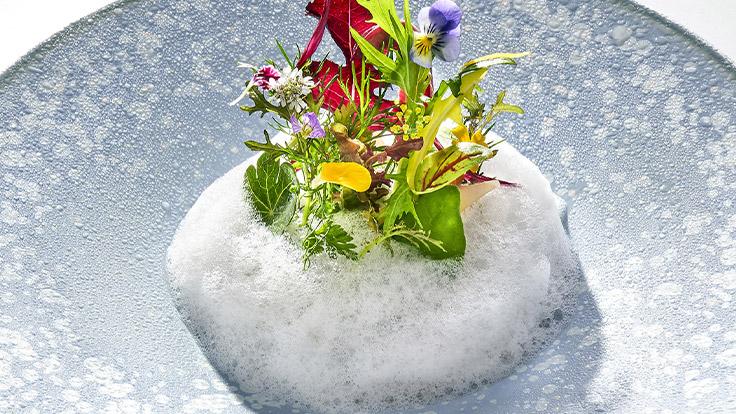 The dish that caught the inspectors' attention

Kobayashi's signature dish of Scottish smoked salmon with roquette mousse and lemon emulsion is a beautiful plate where the vegetables are the main focus. It comprises several small crunchy seasonal vegetables such as cucumber, celery or radish served as they are, with a few slices of perfectly smoked salmon. This is accompanied by a tasty roquette mousse, lemon emulsion, tomato vinaigrette and ultra creamy mayonnaise topped with herbs like basil, shiso, dill, endive, treviso and oak leaf. A final garnish of flavour to the dish comes in a crumble of black olives. It's absolute elegance on a plate.

Written in French by Gautier Battistella, translated by Lin Rongyin and edited in English by Debbie Yong. To read the original story, click here.

One producer, one chef : Hervé Mons and Michel Troisgros

The MICHELIN Guide France dedicates a series of videos to the bond between a producer and a chef. For the third episode, we went to meet Hervé Mons, cheesemaker, with Michel and César Troisgros (le Bois sans Feuilles, near Roanne).

Zooming In on the UK’s Newest Three Star Restaurant