Self-made restaurateur Beppe De Vito of the ilLido group, who helms the one-Michelin-starred Braci, remains a child at heart.

Ask self-made restaurateur Beppe De Vito, 46, what he would say to his 10-year-old self and he laughs.“I don’t know how I would talk to myself. I still feel like I am a child,” he says.

After pausing to reminisce, he adds: “I wish I could go back and, with the knowledge that I have today, start facing that part of life. It was tough, as a kid from 10 [years old] onwards, it gets really really tough and it could be lonely as well at times.

“I think I will just say, ‘Don’t worry too much. You’re going to be okay. Just keep on doing what you are doing’.”

MICHELIN Guide Insider Series - The Child in You

All Work, No Play

From the age of seven, de Vito was already working in his hometown of Puglia in Italy and that made him more mature than other kids of his age. He had to work because his family was not too well off and was already earning his own keep in his teens.

“It wasn’t just like a part-time job for a couple of hours. I go home after school, have lunch, do my homework and then go to work for six, seven or eight hours sometimes you know, until late night, nine, 10, 11pm as well. I never hung out with my classmates at the time. I have two sisters who are of similar age to me, [but I] didn’t really play with my sisters. My younger brother is five years younger than me, so he was like a little baby when I was at the playing age.”

He worked Sundays as well and did not have any free time, much less holidays, as a child. Because he was always in the company of older people, like friends who were at least four or five years older and his colleagues, he became very independent and organised work on his own. As his confidence grew, he ventured further away from home to look for jobs.

“When I heard about the possibility of working on a cruise ship on the other side of the world, I went alone to Switzerland, went for an interview and got myself a job. For the first time, I took a plane and it was to go to New York,” he recalls.

“Then I heard of this very famous hotel in London. I managed to find the phone number, called the manager and talked to this guy. And I got the job with two calls.” 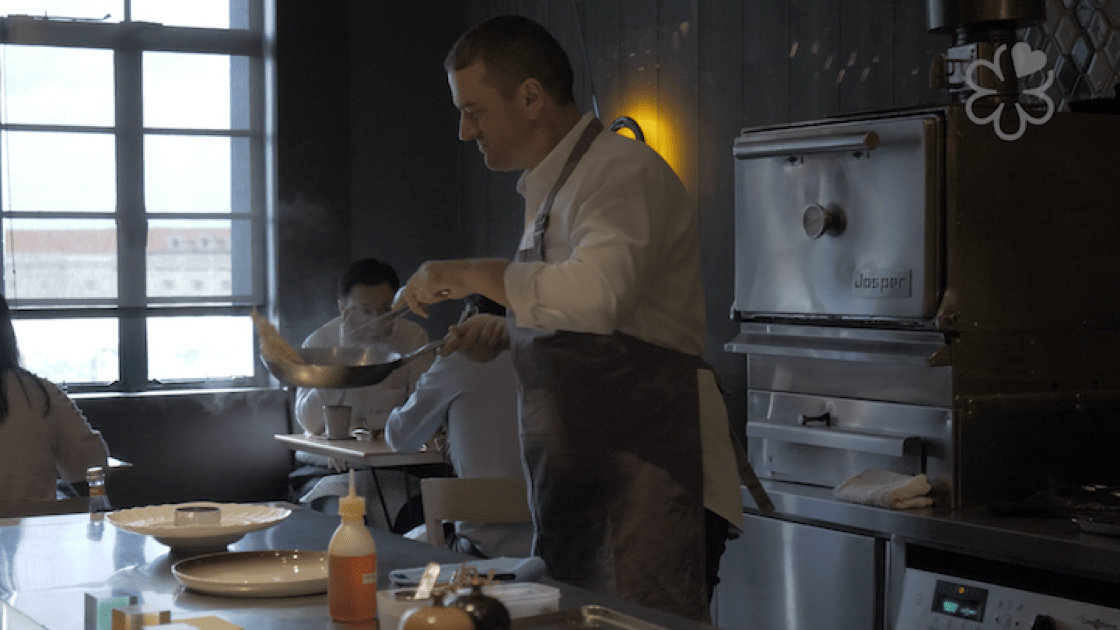 Despite his young age, his maturity and resourcefulness led him on a course of discovery and his pursuits developed organically as he travelled and worked.

“Salary was never part of it. It was about the experience, the exploring as well. I guess deep inside, I am a bit of a journeyman, someone who is meant to explore and to go to discover new frontiers,” he says.

“I just take things as they come, just let it grow organically. I don’t have routines, I don’t have like fixed schedules apart from the work, so it’s all organic — even the way I plan menus, even the way I plan my business.… it’s a natural choice, it is a ‘yes’ or ‘no’ right away with people I meet, with things I do, with the family. I think for me, it is important to be genuine.”

Connecting With The Kids

With seven restaurants and bars keeping him busy — including progressive Italian and one-Michelin-starred Braci, recently rebranded Art (formerly Osteria Art), casual concept Amo and Aura at the National Art Gallery — de Vito makes it a point to connect with his four boys, who are aged from four to 14.

“What’s amazing with kids is how genuine they are. They couldn’t care less for you because they are just trying to get whatever they want and they don’t mince their words. You can be yourself, they can be themselves and that can be really relaxing because you don’t have to think too much and that’s what I learnt from them. It reminds me to learn from them all the time and that’s how I learnt to completely switch off when I am with them. I don’t need to worry about anything at all.”

Ask him about parenting and he lets on that he is not the kind to sugarcoat his words.

“I think lots of parents are being overly cautious with their kids and they are just building the weaknesses. For me, I get quite rough with them, at times even purposely so. “You know, when it is time to tell them [that they are not doing well], I will just tell them the way it is and it is to build the confidence. To let them understand that they have the potential but they have to work on it.” 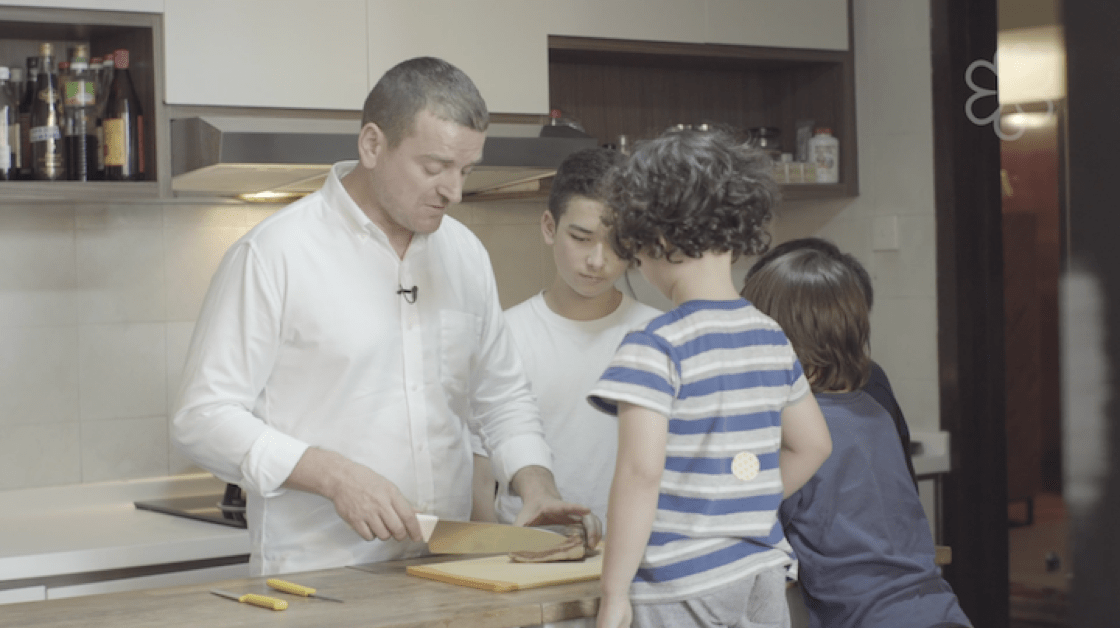 In between restaurant visits during the day, he returns home to spend quality time with his kids. On weekends, there’s family time spent by the river on scooters or bikes. The MICHELIN Guide Digital team caught up with him at his home in River Valley last month and we saw him in action with his four beautiful boys, cooking pasta with Naturel’s brown rice offerings and olive oils.

In the kitchen, five big boys prepared dinner and had lots of precious bonding time over Italian staples, with De Vito guiding his tribe through slicing, then onwards to cooking pasta, making the sauce and tossing, all the while dishing out tips to his sons.

“Pure is a good word to describe them. The experience you have with them is pure and natural.”

Looking back now, he sees how his early start in life emboldened him with the experiences he had and this definitely shows in his parenting style as well.

“I gained so much experience early in my life that by the time I was seventeen and overseas, I was way ahead of my peers. These experiences gave me confidence. There are ups and downs in life and when it was going down, I kind of had the confidence, you know ‘It will be fine tomorrow’. So that kept me positive and I kind of like try to have the same attitude today,” he says.

He hopes the boys lead a beautiful, simple, natural life, surrounded with lots of affection.

“For me, that will be a successful life for them. I feel like it’s my duty to push them as a parent, but at the same time, not to have too high the expectations.

“And I think it is important to always keep the child in you. Just don’t leave the child behind.” 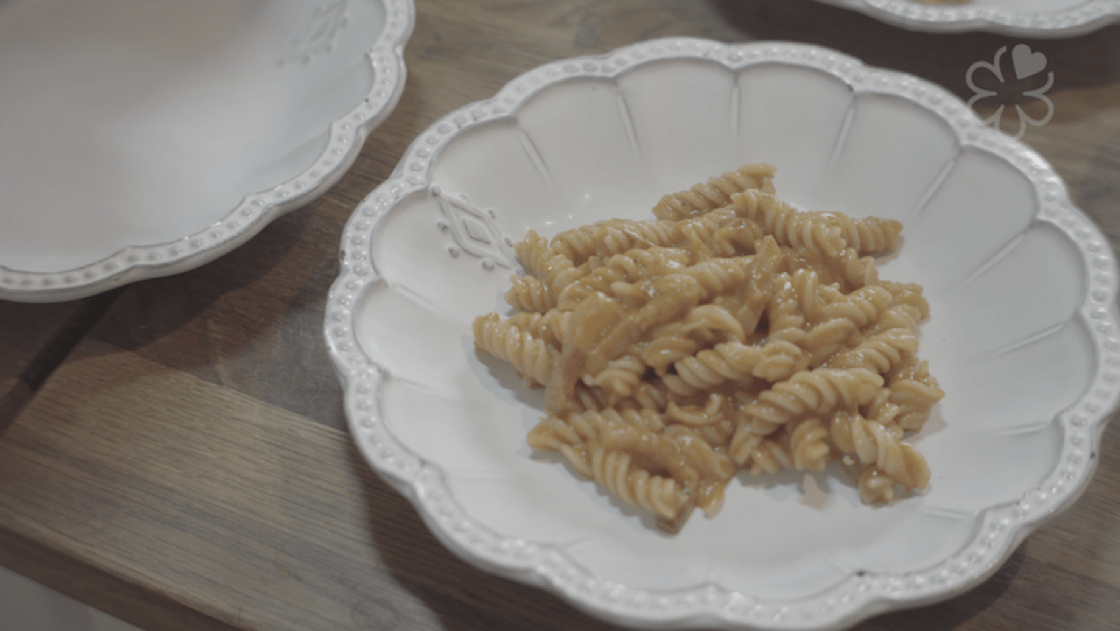 The following shows the recipe de Vito cooked with his kids in the video. Have fun whipping up healthy meals with your loved ones.

1. Bring a large pot of water to a boil. Add one table spoon of salt to boiling water.

2. Once the water reaches boiling point, add pasta and cook for 10 minutes. In a saucepan, cook the chopped pancetta with some olive oil until brown and crispy, remove some of the rendered fat and add the sauce and cook together for a few minutes.

3. Once the pasta is ready, strain and add it to the sauce with a ladleful of the water and stir to allow the pasta to absorb the sauce

4. When the pasta is well-dressed with the sauce, proceed to plate and top with some grated Parmigiano cheese.