Tonight, Textúra is celebrating its third anniversary. Ákos Sárközi is relieved. Opening a restaurant just before the Covid pandemic took over the world could have been a curse, but Textúra is a success. « I built it from scratch, it was so exciting », he emphasizes. « It’s hard to be one bottom riding two horses », he then adds with a laugh - a Hungarian expression to describe his work at the head of two restaurants simultaneously. His first business, Borkonyha, is so popular that he has to turn down guests every night. He wanted to be able to send them to a place recreating the intimacy of Borkonyha before the Michelin star fame. Textúra is a relaxed fine-dining place. It also distinguishes itself by being a proud supporter of Hungarian cuisine, while Borkonyha is a French gastronomic bistro.

Textúra is located at the pulsing heart of Budapest, on the Pest side of the Danube river, just a few steps away from Borkonyha. Upon entering, one notices immediately the impressive honeycombshaped interior design, the light wood of the modern chairs, the industrial soft greys on the walls. The place has the aura of an unconventional art gallery. It’s no coincidence that Chef Áko’s wife, Evi Sárközi, is a painter. « My wife’s art inspires me to challenge my own way of presenting food », the chef explains. He shows his forearm tattoos : a Michelin star, his wife’s name, a gigantic piece inspired by Salvador Dalí. « I create meals for my wife’s paintings. We paint together: only I paint with food and not with brushes. I want to make edible artworks. When I create a new dish, I think of the aesthetics first. Taste comes second. » 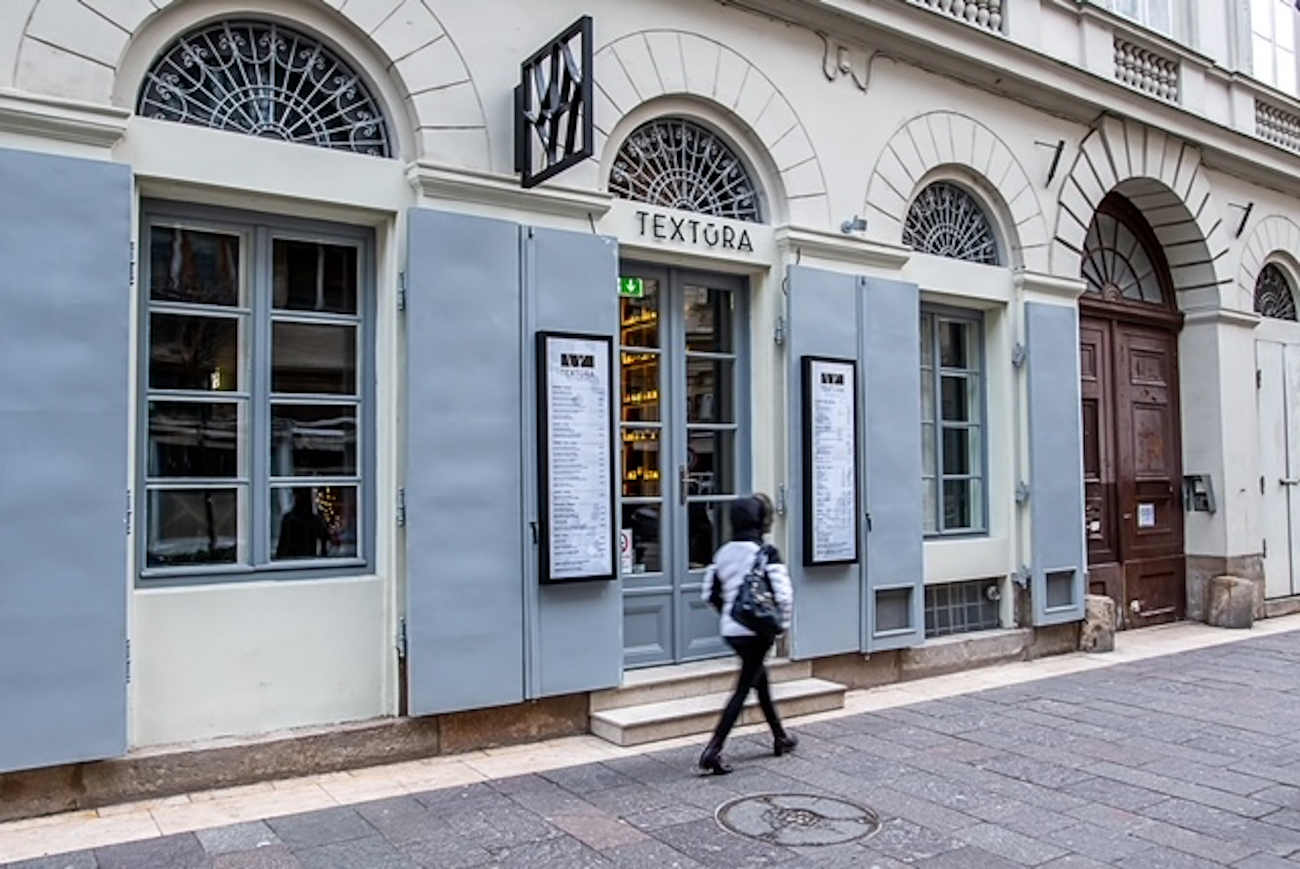 The sentence could scare away many foodies - all looks, no taste ? A starter shows up : Jerusalem artichokes with vanilla cream and artichokes chips, served with a stunning glass of dry Tokaj wine (many foreigners ignore the fact that the famous Tokaj is not simply a sweet wine, as its dry version is extremely popular in Hungary, and a hidden gem for many wine lovers abroad). The dish is exquisite and visually beautiful. Its follower is even more surprising : A soft oval ball with a jellyfish-like shell, decorated with a fish-shaped golden biscuit, looking like a dish inspired by the ocean. But it’s actually a foie gras mousse, a Hungarian cuisine staple. Chef Ákos laughs, loving the joke each time it pops out of the kitchen. Again, the duck liver’s perfection is unquestionable, and all of his next dishes exhibit the same level of technicality and aesthetics. It’s balanced, unexpected, and the textures are always surprising the palate. This is fun cuisine, but it’s also real gastronomy. The technique is obviously French, yet the ingredients and the spirit are definitely Hungarian.

Deer, fawns, quails, wild boars and hares fill the luscious forests of the landlocked country. Hungary has a long tradition of hunting, cooking and curing game meat, bringing its distinctively strong character to many traditional dishes. The chef buys venison directly from hunters, alternating with farmed rabbits, pigeon and partridge. A main dish of fawn saddle with tomato puree and black curry salsify, or a pheasant soup with homemade noodles, are a good way to convince yourself of Ákos Sárközi’s talent with game meat. Another typical Hungarian trait of Textúra’s kitchen is the habit of saving everything, a custom meant to waste as little as possible of the precious produce and meat during the long and harsh winters. He uses ingredients neglected by many other chefs, like liver and heart. He makes chips out of the potato skin and ferments a lot of vegetables, just like a countryside grandma would. « I’m a restaurant owner », he says, « I have to be careful with money. Money is what allows me to be creative ». 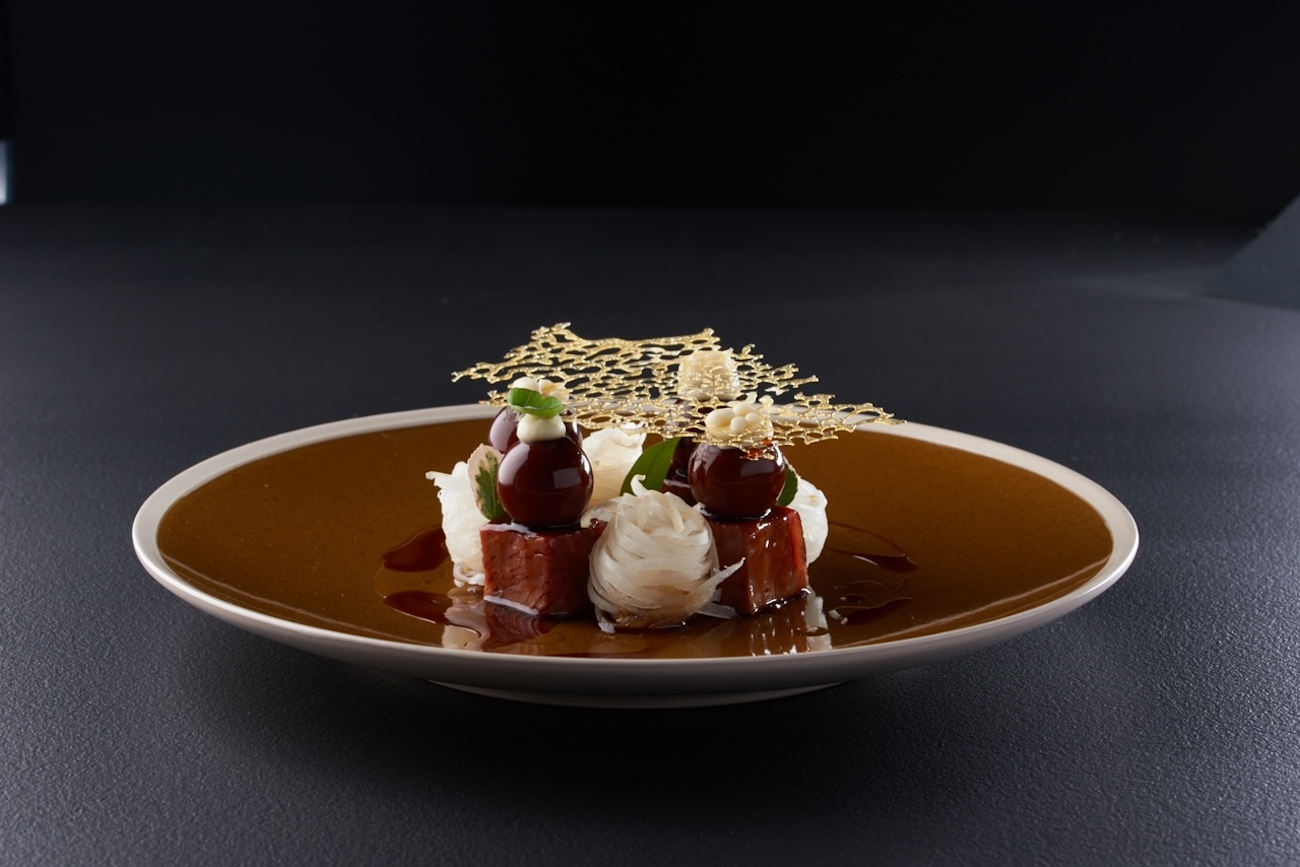 The chef’s playfulness is a testament of his good nature and his love of people. He is warm, smiling, and his childlike spirit fills the place with its vibrant enthusiasm. The father of three children (« and three dogs ! », he interjects) is a celebrity here, the proud bearer of an early Michelin star (2014) in Hungary, and a TV cooking show jury member. Yet he underlines that he owes his success to his team, with whom he’s spent ten years of his career. Two of his former students were hired as head chefs in Textúra and Borkonhya.

Chef Ákos strongly believes that anyone can cook. He never hesitates to use his restaurant guests as consultants, asking them what they think of the taste or of the presentation. « They often have good ideas ». In return, he happily shares his recipes with them. « You can go behind the scenes at Textúra. There are no secrets ! »

No secrets, maybe. Yet on their way to the restrooms, the guests will stumble upon the mysterious presence of… a lucky garden gnome. « You have to pet his head and make a wish », Sárközi explains with mischievous eyes. Maybe we’ll make a simple wish to return soon for another creative dinner at the joyful Textúra ?