When chef Paul Longworth talks passionately about reducing food waste, it’s not the romantic, trendy notion of sustainability that fuels his speech — it’s his bottom line. “Don’t get me wrong, I’m 100% all for sustainability, but isn’t that what we’re meant to be doing as chefs anyway? I’ve never worked in any restaurant where the chef is okay to have waste. Why? For the food cost,” he says.

And never has it been more pressing for him to keep a tight rein on food costs than in his current role as chef and co-owner of one-MICHELIN-starred Rhubarb Le Restaurant, an intimate fine-dining establishment he opened together with business partners Jerome Desfonds and Alice Low-Ang in 2014. “When you are an employee who gets paid every month, you don’t think much further than that. But now I see everything: the rent, the staffing costs, the suppliers… When something in the kitchen stops working and you’re hit with a $5,000 repair bill, you have to pay it because you need it. The buck stops with Jerome and I,” says Longworth.

“What I take from that is that I have an awful lot more respect for money. I have so much more appreciation for the people that come to our restaurant and put their hard-earned money into my hands. It makes me want to give them the very best we can.”

Journey To A Michelin Star

In the age of celebrity chefs and headline-hogging MICHELIN-starred restaurants in Singapore, Rhubarb is a bit of an anomaly. From the get-go, Longworth and Desfonds had largely depended on word of mouth to bring customers in to the shophouse space they occupied on Duxton Hill, eschewing PR hype and flashy marketing spiels to focus on the food and service. 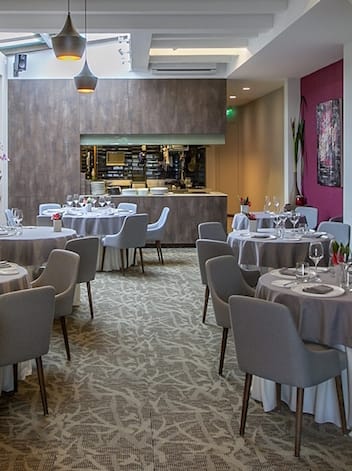 “We just wanted to be a good restaurant where people felt comfortable to be. We didn’t set out on a crusade, to spread a message or follow a trend,” says Longworth. “We weren’t trying to give people an experience, we’re just giving them lunch and dinner at fair prices.”

Rhubarb is posh and discreet. Guests at the seven tables in the main dining room and small private room upstairs are welcomed and pampered by restaurant manager Desfonds. Longworth helms the adjoining open kitchen, turning out polished contemporary French fare with “little twists and surprises here and there” like a frothy emulsion of white onion and black truffle puree or pork tenderloin with pumpkin laced with the soft scent of vanilla.

When the MICHELIN Guide Singapore was launched two years later in 2016, the inspectors were won over by Rhubarb’s “sophisticated cooking, deeply rooted in French classical cuisine but subtly and intelligently updated without recourse to gimmicks” and recognised the restaurant with a Michelin star. “When Rhubarb got its star, it was a proud moment because it meant that we were operating at a good level and doing better than we thought we were. It was very satisfying to know that,” says Longworth.

RELATED: The First Day I Got My Michelin Star: Paul Longworth Of Rhubarb In Singapore

However, he admits that these days, being a good restaurant is not enough anymore and has stepped up efforts to get the restaurant in the public eye through social media, events and chef collaborations like his upcoming four-hands with Gattopardo’s Lino Sauro at the latter’s Sydney restaurant. “If you don’t keep yourself vocal and visible, you’ll be forgotten,” he says pragmatically. 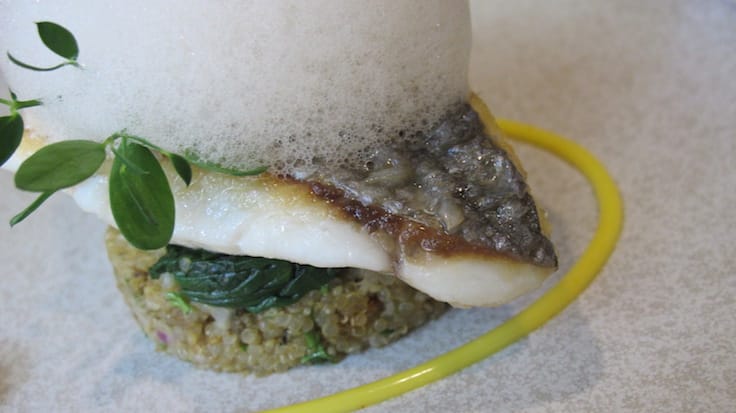 Longworth presents refined contemporary French cuisine with little twists at Rhubarb (Pic: Rhubarb)
So You Think You Want To Open A Restaurant?

Longworth shares that opening his own restaurant felt like a natural progression in his career, which has seen him moving up through the ranks in London restaurants like Blueprint Café, Racine and MICHELIN-starred Club Gascon. He arrived in Singapore in 2009 as the head chef of Oenotheque by Wine Universe, then made a defining decision to move to Au Petit Salut as the group’s executive chef. “Commis, demi, chef de partie, sous chef, head chef, executive chef — What’s the next step up? Doing it yourself and making it work,” he says.

The idea was seeded one busy December dinner service as Longworth looked around the fully occupied dining room with 50 tables. “I remember thinking that if we could put the same amount of energy we were expending into something one-third the size of Au Petit Salut, it’s going to be a brilliant restaurant.”

It was a conceit he admits is not uncommon to young chefs dreaming of opening their own restaurants. “It’s very normal to think: ‘If what I’m cooking here is good enough to bring in 100 covers, then why is not logical to think I can easily bring in 20 to 30 covers elsewhere?’ But there are a lot of factors. To be very candid, I didn’t think it would be this tough.” 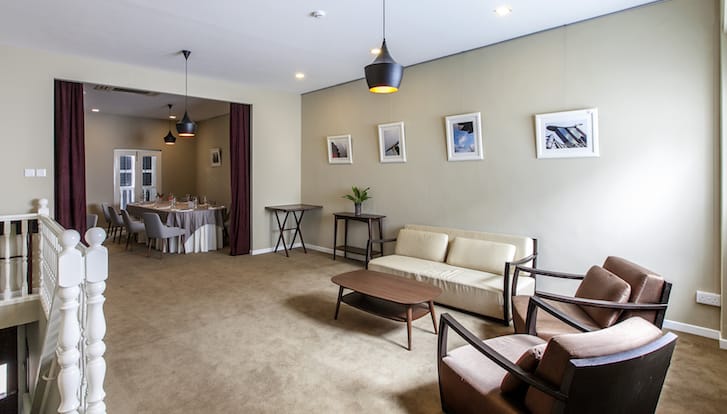 The lounge and private room on the second floor (Pic: Rhubarb)
It is a career move he advises young chefs not to make lightly. “The reality is that it’s not easy, there are a lot of challenges along the way and some restaurants might not make it,” he says, adding that it is important for young chefs to take their time to hone their fundamentals and build a culinary repertoire wide enough to hold up against fickle food trends.

“I think you at least need to be a head chef a few years before you even contemplate opening up yourself,” says the 41-year-old chef. “I’ve been cooking for 23 years — we have a MICHELIN star and I feel like I’m at a good level where I am — but make no mistake, there are still many restaurants in Singapore that I would love to step in because I know there will be something for me to learn.”

Rhubarb’s Fifth Anniversary And Beyond

Rhubarb will be celebrating its fifth anniversary in August. Longworth plans to mark the milestone with a special dinner menu bringing back the most popular dishes from the restaurant’s past menus. “We’ll do a ‘Greatest Hits’ dinner menu with dishes like the Hokkaido scallops with pork belly, cauliflower, white chocolate puree and crispy chicken skin, which was a hit on our opening menu,” he says enthusiastically. “We’re going to take our very first dessert, the chocolate and peanut butter torte, and revamp it for 2019.” 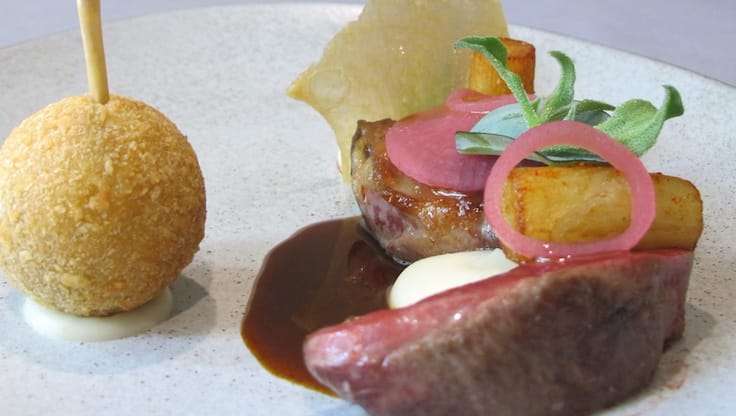 Rhubarb's signature pigeon dish (Pic: Rhubarb)
He’s also planning to close the restaurant on two nights for private dinners to invite regulars that have supported them over the years. When asked what he thinks keeps diners coming back for more, Longworth replies: “The secret to running a restaurant is to always over-deliver. People need to see value. We work within our means and punch above our weight.”

The last five years may have brought its own challenges and “a lot more grey hairs”, but Longworth cannot deny the satisfaction it brings to see a restaurant to call his own running profitably. “You’re only as good as the people that work with you. When Jerome and I are able to take a step back and see that the machine is working — the food coming out as intended, the customers happy and sending back empty plates — it makes all the hard work worth it. That pride and sense of ownership is very satisfying.”