New restaurant Kausmo has just opened on the third level of Shaw Centre in Orchard Road under the banner of prominent restaurant group Les Amis. But it isn’t another polished fine-dining establishment helmed by a seasoned expatriate chef. Instead, two fresh-faced millennials front the cosy dining room, serving up a tasting menu cooked out of usually overlooked produce and food waste intercepted along the supply chain like fruit too ripe for retail or oddly sized vegetables that won’t fit packaging specifications. 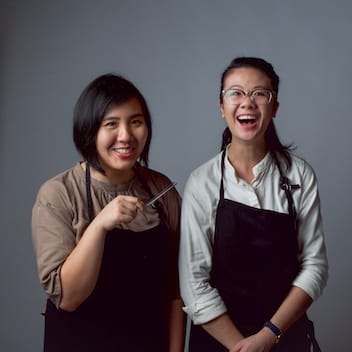 Founded by chef Lisa Tang, 24, and front-of-house manager Kuah Chew Shian, 26, Kausmo aims to foster conversation about sustainability and thoughtful living through cooking with what others might consider food waste. The restaurant space, which feels like the dining room of a friend’s home, is centred around a 16-seat communal table that overlooks the open kitchen. The six-course modern European degustation dinner comes with Asian inflections and a side of great conversation. (Pictured: Kuah Chew Shian, left, and Lisa Tang, right)

In the course of their research, the duo visited local producers to learn about sustainable farming practices and met with importers and suppliers to better understand supply chain issues, insights they hope to share through Kausmo. “It’s easier to start conversations over the dining table,” says Tang. “Food is something that transcends backgrounds and cultures, and through it, innovative ideas can be shared, minds can be opened.”

Kausmo’s soft approach to creating awareness about food sustainability issues spans the entire dining experience. These include stories about the origins of what goes into the dishes, the little retail corner stocking sauces and preserves made from overstocked or overripe produce and the engaging content on its social media platforms such as recipe videos that show homecooks creative ways to fully utilise a particular ingredient. 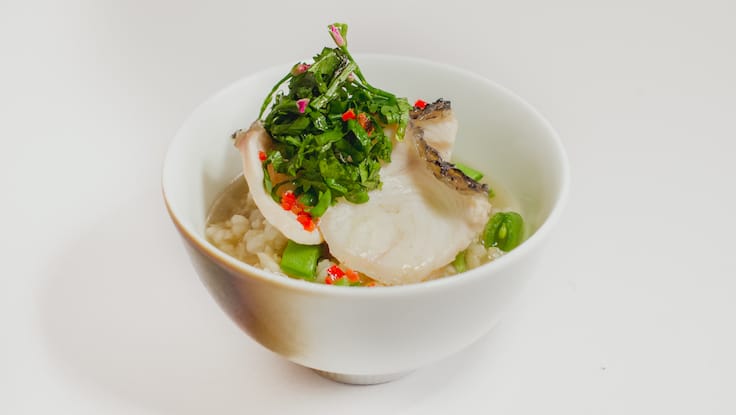 Kausmo's post-main course is a comforting Asian-style congee, made with the available greens and catch of the day (Pic: Kausmo)
“What we want to do is provide an approachable and relatable platform to share the message about sustainability and thoughtful living,” says Kuah, adding that they hope that it will inspire diners to become more aware of sustainability issues and continue the conversation in their wider communities. “It’s not just something a fancy restaurant can do, but what you can do at home too.”

Prior to opening Kausmo, Tang spent nine months last year working at farm-to-table restaurant Primo in Maine, United States, where she was inspired by the establishment’s full-circle ethos of growing its own food and channelling food waste back to the land. It was a “game-changing” experience that changed her thinking about flow and life cycle of food.

While a full-circle restaurant concept like Primo is not quite feasible in land-scarce Singapore, local urban farming enterprise Edible Garden City has been making strides in closing the loop and making a circular economy for food possible in the city state. 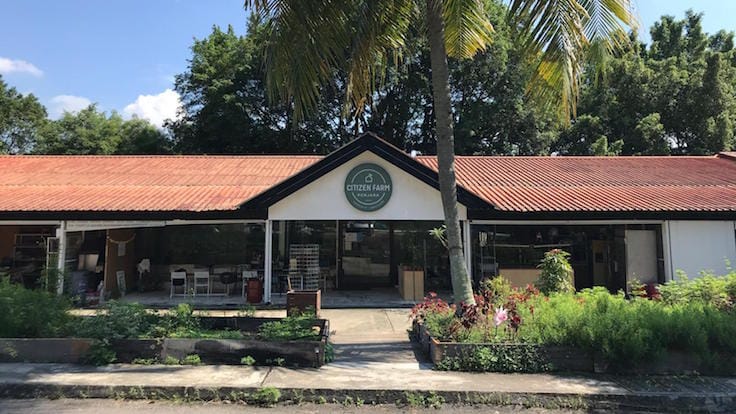 Citizen Farm is a closed-loop urban farm that channels food waste back into the soil (Pic: Edible Garden City)
In 2017, Edible Garden City launched Citizen Farm on a 9,000-square-metre plot of government-leased land in central Queenstown. Citizen Farm is Singapore’s first closed-loop farm. It not only supplies chefs and families with sustainable, locally grown fresh food through a mixture of technology and urban farming methods, but also channels food waste back into nourishing the soil and plants. For example, coffee grounds are converted into fertile soil for growing mushrooms.

Onsite at the farm, Edible Garden City works with another local farming entity, Insectta, to run Singapore’s first Black Soldier Fly breeding facility. The fly grubs feed mainly on okara (soy pulp) and spent brewery grains, food waste sourced from production facilities nearby. These by-products are thus converted by the insects into nutrient-rich frass which is then used as fertiliser in the farm’s outdoor garden beds.

The construction of a two-storey container farm on the premises was also completed in April, to be used as a test bed for a plug-and-play solution to bring the same circular economy of agriculture to residential estates. In the future, if the plan succeeds, Singaporeans will be able to buy local produce much more conveniently and be able to recycle their food waste easily as well. 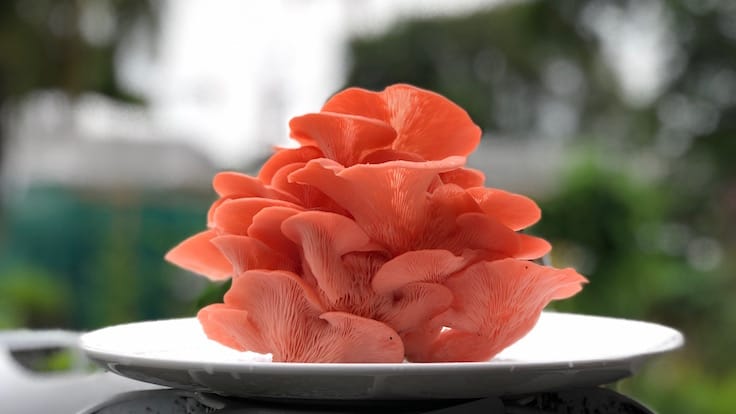 To bring such models and ideas to wider society, Edible Garden City founder Bjorn Low acknowledges the galvanising power that chefs have. “I hope to bring back some of the things that were lost to the commercialisation of the food system and these chefs are the best people to interpret that into dishes that can change the mindset of the broader public,” he says.

Over at CURE in Keong Saik Road which opened in 2015, chef-owner Andrew Walsh has long been an advocate of minimising food waste in his restaurant with his seasonal and plant-based menus that employ a root-to-stem philosophy. In the kitchen, the zero-waste mentality is reinforced by senior chefs checking the bins every hour to make sure there is no unnecessary wastage. 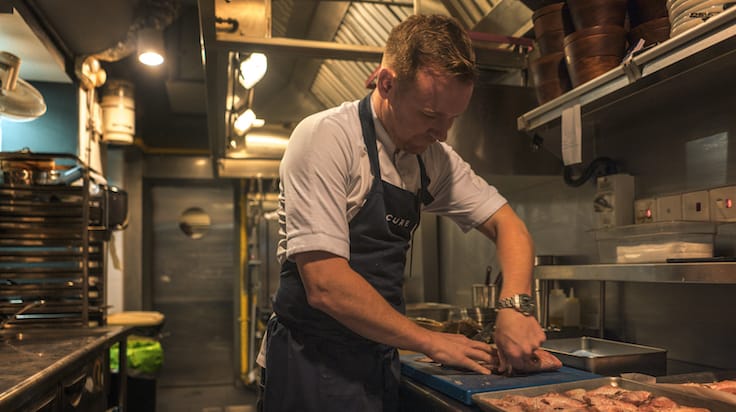 Earlier this year, Walsh took the movement out to the wider Keong Saik community with his Scrappy Suppers initiative, inviting fellow chefs, bartenders and F&B operators in the neighbourhood to gather and talk about food waste and sustainability issues over a potluck supper. The first gathering was held after-hours on 30 April and was attended by chefs and bartenders from the likes of Neon Pigeon, Pasta Bar, The Guild, Burnt Ends, Butcher Boy, Gaston, Nicolas Le Restaurant and The Old Man Singapore, with each establishment contributing a family-style dish made from repurposed food scraps. 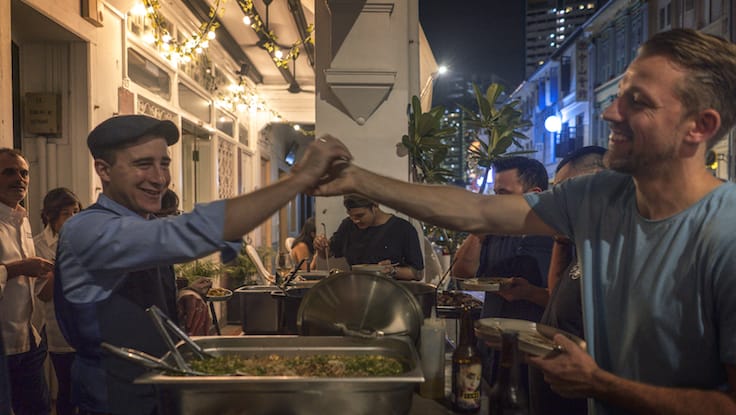 F&B operators in the Keong Saik neighbourhood gather over supper to talk about food waste issues (Pic: CURE)
“I think everyone was already thinking about some of these issues, so one of my objectives was to create more conversation and build a community to share stories, feedback and contacts,” says Walsh. He shares that some of the common gripes that came up during the supper included the amount of packaging that restaurant produce often came in and the lack of infrastructure for proper waste disposal and recycling.

“If we can keep meeting like this, every three to four months, keep the conversation going and build traction in this community, who knows what it could lead to in the future? Maybe [other restaurant clusters like] Duxton or Amoy will start one; maybe the government can get behind it with more schemes or grants to support the cause,” he says. 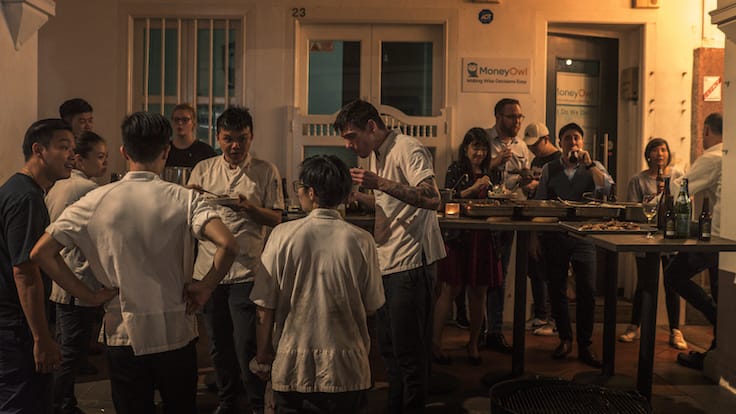 Walsh hopes galvanising a community can lead to bigger change in the future (Pic: CURE)
Bolstered by the turnout of the first gathering, Walsh is hopeful that his grassroots movement can sow the seeds for more concrete change in the future and is in the midst of organising the second edition of Scrappy Suppers, slated for 26 June.

He adds: “Now more than ever, it’s very important for us to get the message [about sustainability] across Singapore and that’s where community comes in — more hands make light work. It’s time to get our act together and tidy up a bit.”
Advertisement
Advertisement