A bustling financial hub, a concrete jungle of soaring high-rises and swanky malls — that’s the Singapore that most are familiar with. But peel back the pages of history and you’ll see that it wasn’t too long ago that the city was a little fishing village and a port of call for trade in local produce like pineapples, nutmeg and cinnamon.

As post-independence Singapore sped towards becoming a First World nation in the second half of the 20th century, orchards, plantations, poultry and pig farms had to make way for other less land-intensive sectors. By the 1990s, Singapore’s agriculture industry had shrunk to less than 1% of its total area, most of it clustered at the Kranji countryside in the far-flung northwest.

However, recent years have seen a renaissance of sorts for farming in Singapore, the charge led by pioneers like Bjorn Low, 38, who has spent the last seven years changing Singaporean mindsets around agriculture and farming with his social enterprise Edible Garden City. Low's work has made farming possible for a city of urban dwellers, making use of under-utilised spaces like rooftops and carparks and engaging marginalised communities to their hands to the plow. From $10,000 in initial capital, Edible Garden City ended 2018 at $1.4 million in revenue with a target to hit $1.9 million this year, proving that the social enterprise model for urban farming can foster social cohesion, environmental sustainability — and be commercially viable.

After leaving his career as an advertising executive in Britain, Low spent about four years traveling through Europe and Japan working on organic farms. He returned to Singapore in 2012 with simple dreams of becoming a farmer, but the barriers to entry into the traditional agriculture industry proved too high when he could not afford the land he needed to start a farm.

Breakthrough came in the form of a chance encounter with another Bjorn. Bjorn Shen, chef-owner of Artichoke, was trying to grow herbs outside his restaurant in the city but failing miserably till Low came along. They decided to work together to grow edible, yet aesthetically pleasing plants in stacked planter boxes on the patio.

The idea of urban farming took root — Singapore’s concrete jungle would be the very farmland for Low’s urban farming social enterprise. Where founding father Lee Kuan Yew had envisaged the country as a Garden City in the 1960s, Low now set his sights on making it an edible Garden City.

Since then, social enterprise Edible Garden City has built about 200 urban farms all over Singapore on the rooftops of buildings like Raffles City, Marina Bay Sands and Wheelock Place, in private and public housing estates, in schools and even in a prison. 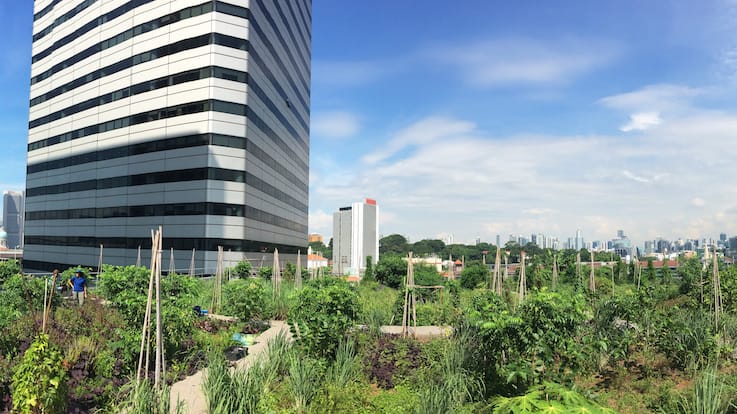 Edible Garden City also works with chefs to grow herbs and vegetables for their restaurants, including Michelin-starred establishments like Labyrinth, Candlenut and Alma. “Back then, we were really working closely with kitchen teams on experimenting with new herbs and ideas, but as more restaurants came to get produce from us — we have about 70 restaurants in our portfolio now — we started to standardise our offerings to run product cycles on a bigger scale,” says Low. “But we do want to revisit that kind of deeper relationship with restaurants.”

To that end, Low has turned his attention to introducing more indigenous produce to chefs in Singapore, such as native South-east Asian species that do not require climate-controlled rooms or large swaths of farmland. “For us in the tropics, there’s so much diversity we’re only scratching the surface of what’s available to us in this very rich biodiverse environment. I hope to bring back some of the things that were lost to the commercialisation of the food system and these chefs are the best people to interpret that into dishes that can change the mindsets of the broader public.”
Advertisement
Advertisement 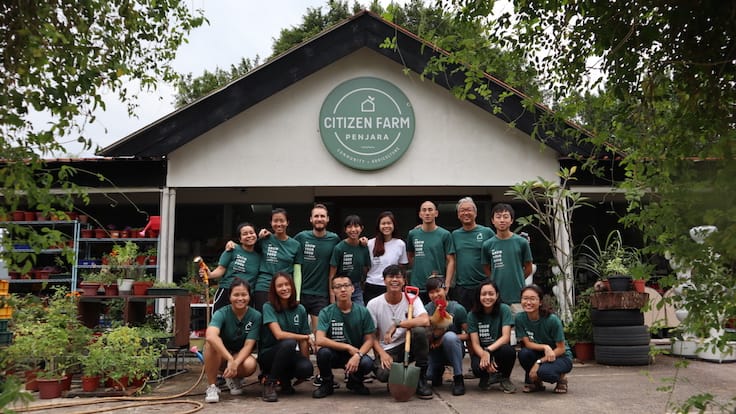 The Edible Garden City team at Citizen Farm in Jalan Penjara (Pic: Edible Garden City)
Launched in 2017, Citizen Farm — a 9,000-square-metre plot of government-leased land in central Queenstown run by Edible Garden City — turns the idea of traditional farming on its head. Think of a typical vegetable farm and Western-style straight lines of open-soil cultivation might come to mind, the soil protected from the heavy tropical rain by big polytunnels, a sight common at farms in Cameron Highlands and Kranji.

Pointing to the seemingly random clusters of shrubs shaded by tall Moringa and banana trees in Citizen Farm, Low explains: “If you look at a setting like that where taller fruit-giving trees are breaking the rain for the herbs like sayur manis and ulam raja, you see a food forest environment which is a permaculture technique that is built for the tropics. When you start to change the way agriculture is practised in the region, you will make a positive impact. Then in Cameron highlands, they might stop clearing slabs of forests and it will pave the way for sustainability.”

He is currently cultivating several unusual tropical crops which he hopes to launch by the end of the year to restaurants in Singapore. Among them are mushroom herb, a dark leafy green plant with leaves that taste distinctly like earthy raw mushrooms; water celery, which thrives in hot and wet environments; and a fragrant, citrusy rice paddy herb from Thailand. “There’s so much diversity that will be lost soon if we don’t continue to look at them. We don’t have to rely on imports of Koppert Cress from Holland,” he says. 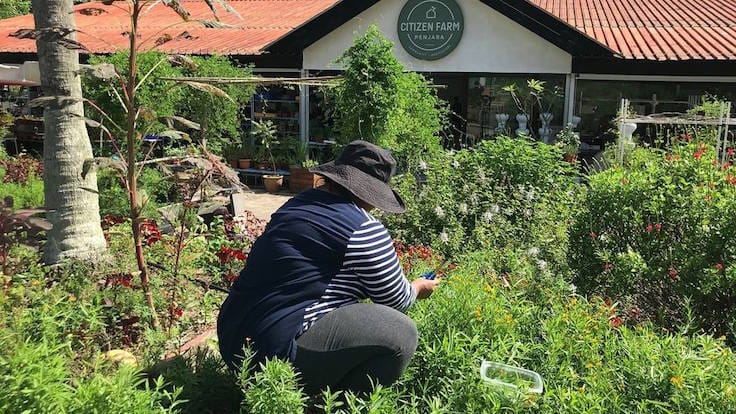 A food forest system is a farming technique built for tropical climates (Pic: Citizen Farm Facebook)
At The Heart Of Farming: Growing People

For Low though, agriculture was never just about crop production, it was about community. Through its inclusive hiring practices and outreach programmes, Edible Garden City aims to foster social cohesion and champion environmental sustainability. Its community garden projects bring urban farms into residential areas where neighbours can come together to produce food while engaging marginalised groups like the elderly or those with disabilities; its collaboration with the Salvation Army’s Prison Support Services provides farming skills that encourage rehabilitative effects on inmates, while its office rooftop gardens — like that of the employee-run urban farm at the Singapore Power building — are an exercise in therapeutic horticulture.

Working with non-profit matching organisation Employment For People With Intellectual Disabilities, Low has also integrated employees with autism and Down Syndrome into his team at Citizen Farm.

“If you dig deeper into the values of urban farming, you’ll realise it’s not only about production, it’s about people,” Low says. “You’re not just growing crops, you’re growing people. That’s what pushes us on to go further in using urban farming as a tool for change.” 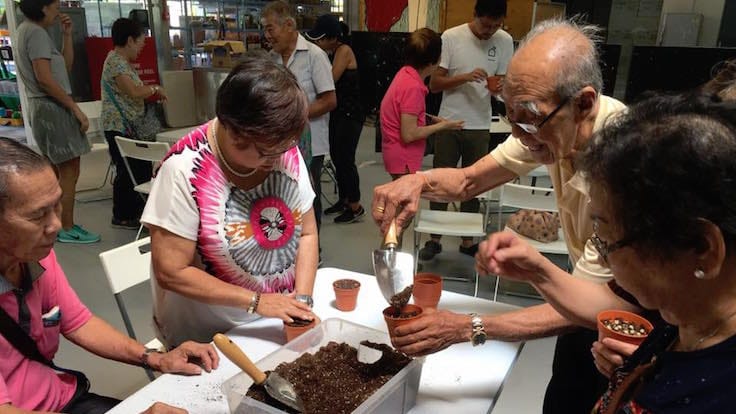 At the heart of agriculture is growing people (Pic: Citizen Farm Facebook)

When asked about his goals for Edible Garden City, Low replies unabashedly: “I think I reached my goal last year, which was to see change in policies about how urban farming can and should be done for the future in Singapore.”

Where before government policies about the farming sector, such as the Agri-Food and Veterinary Authority’s Farm Transformation Map in 2017, focused on boosting productivity with technology and innovation, more recent policy changes have reflected Edible Garden City’s more holistic socially-conscious model. Last year, the Singapore Land Authority announced a tender for an urban farm in Henderson that would incorporate a childcare centre and a nursing home. “Based on the model we’ve built here at Citizen Farm, the government has actually used the basis of social impact — community engagement, hiring beneficiaries, providing programming for the elderly and the children — as criteria for the tender.”

In March, the Singapore Food Agency also announced the government’s target of producing 30% of the country’s nutritional needs by 2030, up from less than 10% now. It laid out four ways the target can be achieved: Using technology to grow more with less, unlocking physical spaces for farming, developing local talent and getting consumers to support local — familiar tenets that echo Low’s work.

Encouraged by the renascent farming industry in Singapore, Low has set his sights overseas, doing feasibility studies with hotels and chefs in desert cities like Dubai and Qatar in hopes of bringing his urban farming model there. “Farming in the desert has always perked my interest. If you can grow food in the desert, you can do it anywhere,” he says. “I’m always very optimistic about what is possible in the most unlikely places.”