With summer reaching its peak this month, traditional Thai restaurants are rolling out their favourite summertime dish to help diners cool off.

Khao chae, which means “rice soaked in water”, is thought to have first emerged in the southern Thai province of Phetchaburi. It was all thanks to Chao Chom Manda Sonklin, the wife of King Rama IV who has Mon roots, who had been accompanying the King on a palace visit when she decided to pass on her knowledge in making khao chae to the palace kitchen staff. The original recipe underwent slight adaptations before a Siamese version known as khao chae chao wang was born. This soon became a popular royal dish that could only be enjoyed by members of the aristocracy.

An elaborate display of khao chae with side dishes at Khao (Bib Gourmand).
Photo courtesy of Khao. 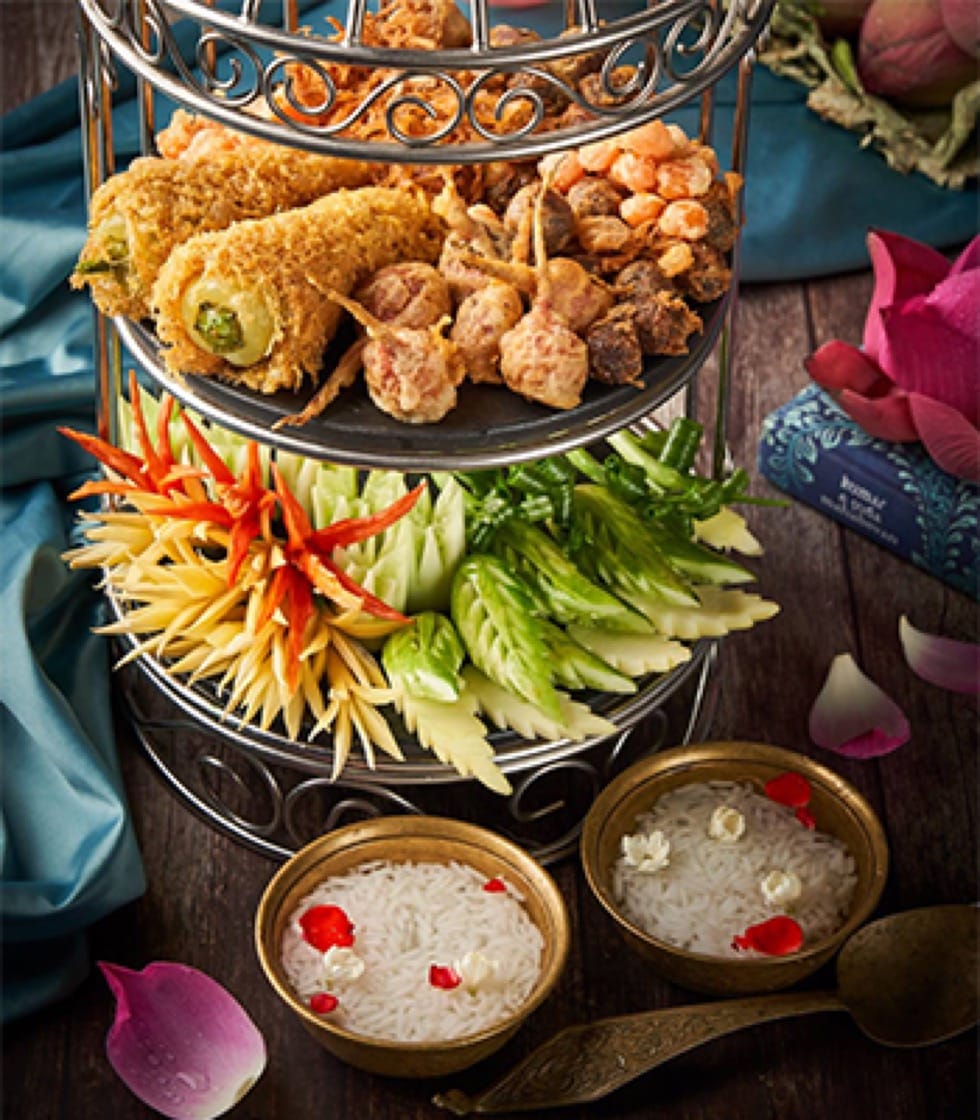 Other historical records claim that it was the Mons who brought the dish into Siam (Thailand’s former name) when they entered the Kingdom. Either way, the dish is one steeped in history and tradition and has become Thailand’s favourite choice for cooling down during the summer.

“As is the case with most of our neighbouring countries, the Mons and Thais are so closely related we’re virtually family,” says Chef Bee Satongun of Paste (One Michelin Star) “so it’s not surprising how we’ve been influencing each other’s food culture. I recently worked on a documentary on khao chae and was told by a Mon local that khao chae was enjoyed alongside yum mamuang or green mango salad. Of course, the recipes and stories about khao chae will definitely vary depending on where you are and who is making it.” 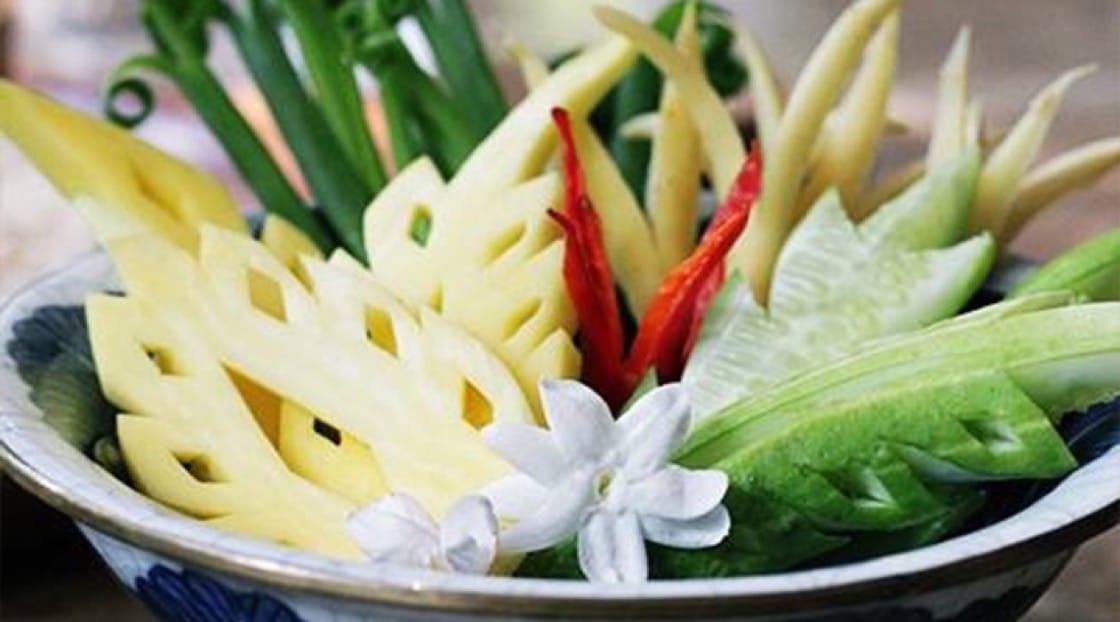 Freshly-carved vegetables to balance out the sweetness from khao chae's side dishes. Photo courtesy of Baannai.

Today, this complex dish can be enjoyed by anyone as it’s on offer at most traditional Thai restaurants during the summer months between mid-March until the end of April.

The dish comprises four parts – par-boiled rice ob tien (rice smoked in scented candle used in cooking), jasmine-scented water, ice cubes and side dishes. The latter can vary depending on who is making it but the stars of the dish usually include deep-fried kapi (krill paste) balls made from grilled snakehead or seer fish mashed together with lemongrass and finger roots (grachai), shredded sweetened pork, beef or fish, Chinese radish stir-fried in egg (hua chai po pad kai), shallots and paprika with herbed stuffing wrapped in egg lace, and fresh vegetables such as cucumber, green mango and spring onion to balance out the sweetness from the side dishes. 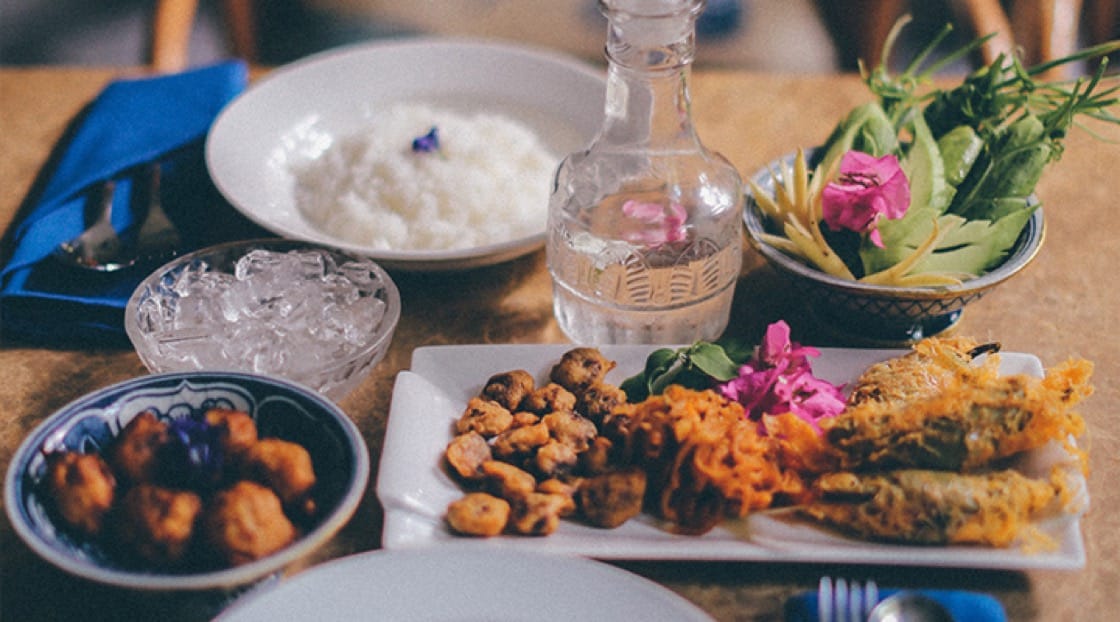 The Khao chae experience at Baannai (Bib Gourmand) is meant to be shared. Photo courtesy of Baannai.

“It’s a delightful dish,” says Chef Banyen Ruangsantheia of One Michelin star restaurant Suan Thip. “If you come to the restaurant now, you’ll see we have trees full of bread flowers (dok chommanat) which we use to give fragrance to the khao chae. It’s our signature finishing touch as most other restaurants use jasmine.”

“Our family recipe for khao chae has been passed down from previous generations for over a century but the key ingredients are there,” explains Doungsawart Soonthornsaratoon, Managing Director of Baannai (Bib Gourmand). “The only difference is that at Baannai, we serve this traditional dish so that it can be enjoyed as a family, so everything is shared and not served individually.” 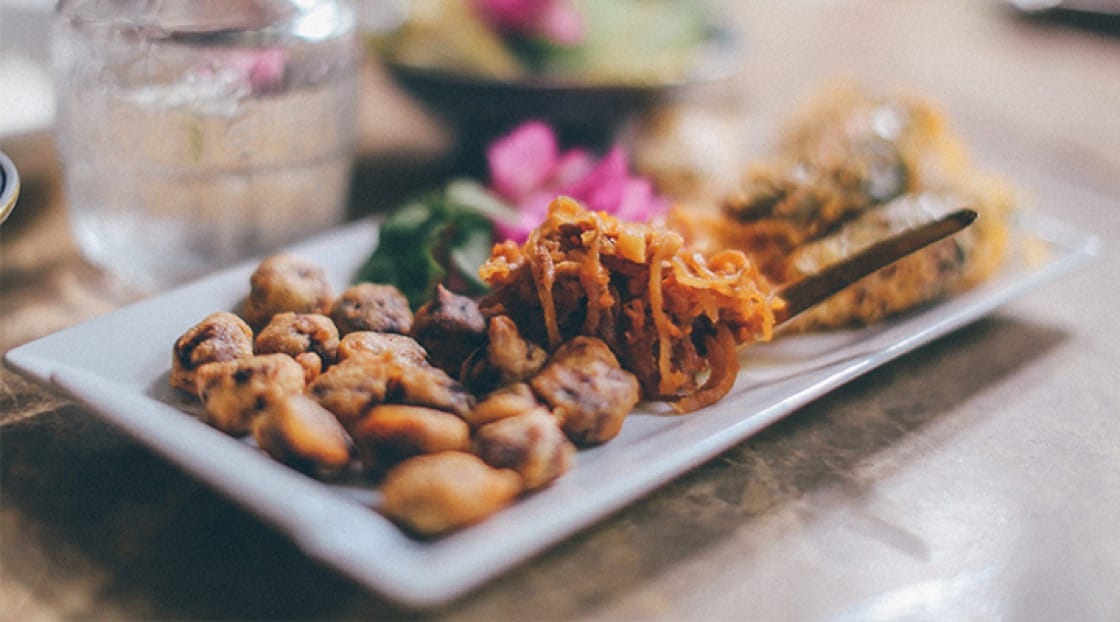 Side dishes vary depending on each restaurant but they usually include krill paste (kapi) balls. Photo courtesy of Baannai.

Not everyone appreciates the art of eating khao chae but once you’ve mastered it, you’ll wish summer was here to stay.

1. Never heap your bowl with rice. Add just enough so that you can cover it with jasmine water and two or three cubes of ice.

2. Don’t put the side dishes into the rice bowl. Just take a bite of the side dish, then wash it all down with a spoonful of rice and fragrant water.

3. The fresh vegetables are for you to enjoy in-between bites as the sweetness from some of the side dishes can be quite overpowering.