The Cambodian-American chef details his incredible journey to New York.

By all visible measures, Cheam appeared like any other young chef breaking into the industry, hardworking and practically anonymous in chef’s whites. “I was picking up skills in butchering, pasta making, classical technique,” he recalls, now a decade later with his own venture on the horizon (Essex Pearl is slated to open mid-May).

But the journey Cheam had taken was far from typical.

Born in Cambodia’s capital of Phnom Penh in 1982, Cheam came alive in the aftermath of one of the worst mass killings of the 20th century. Between the years of 1975 and 1979 under the leadership of Communist revolutionary Pol Pot, the Khmer Rouge regime had claimed the lives of two million people. Families were displaced and millions forced out of cities into communal labor farms in the countryside; a fortunate few in Cheam’s family escaped, risking their lives in the process. 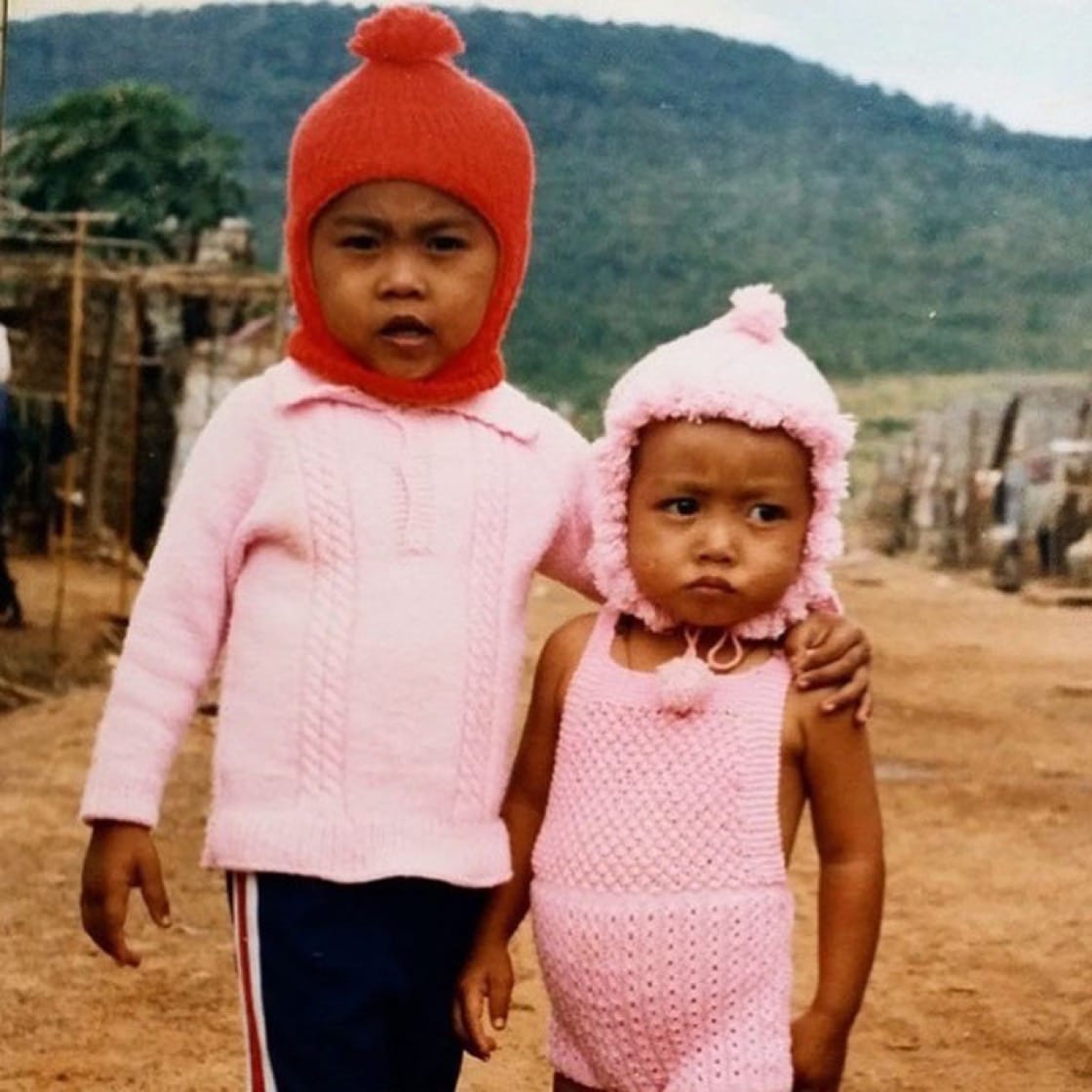 "My mom's a knitter, so since there wasn't much to do she would knit us outfits for the cold weather in America," says Cheam.

“During this time my father was separated from his family,” Cheam explains, “and had no way of knowing if they were alive for many years. When I was four, he received a letter from my grandfather letting him know he was alive and living in America.” This letter began a period of imperiled travel that would eventually lead Cheam to the United States.

Once his family decided to risk everything and find their way stateside, they first needed to exit illegally from Cambodia into Thailand. “Cambodia's borders were closed at the time to anyone trying to enter or exit,” Cheam describes. “Our only choice was to sneak across the border in the middle of the night without being caught.”

First, his family packed everything up and left for the northwestern city of Siem Riep. From there they met a guide who could lead them across the dangerous border littered with landmines. Cheam remembers waking up in the middle of the night at the age of four. “My brother was two at the time,” he says. “At one point in the journey, he started crying. We were following this guide step-for-step. The guide whispered to my mom, ‘You need to shut him up or leave him.’ She stuffed her scarf into my brother’s mouth, he quieted down, and we kept walking.”

Cheam’s family stayed in the refugee camp in Thailand for two years, awaiting approval of sponsorship from the United States. “We had no paperwork,” he says. “If [Thai officials] had caught us, we would have been sent back.” Cheam recalls his dad making an underground bunker beneath the house out of a floating raft where the family would hide if an official entered their house.

It was in this camp that Cheam started to learn English, watching James Bond dubbed in Thai with the rest of the refugees. Over meals of rice, dried fish and pickled mustard greens, people would talk about America, Cheam remembers. “They’d say, ‘in America, TVs are everywhere. Everyone has a car. It always snows. It’s very cold. All Americans only eat bread and cheese and have very big noses. When they go to the beach, they get naked. They’re very promiscuous (unlike us) and they eat ice cream all the time.’”

RELATED: Where Chefs Go: Siem Reap, Cambodia
When Cheam’s family finally landed at JFK in 1989, it was the first time his dad had seen his brother in 20 years. They moved to Harrisburg, Pennsylvania, where Cheam and his brother slept on the floor with an aunt in a crowded home full of family members. “My parents found jobs at a chicken slaughterhouse, and then when I turned twelve I joined them there. I had small hands, so my first job was to scoop out the chicken guts.” Cheam’s parents later took jobs at a fiberglass factory, bakery and, eventually, their own convenience store and Chinese take-out restaurant (where Cheam and his brother worked as well).

The young chef eventually went to Baltimore International College, and began cooking at places like the Holiday Inn, Applebee's and various other restaurants in Pennsylvania. He then moved to New York in 2009 as a 27-year-old, where he took positions in the kitchens of Commerce, Wong (under Malaysian chef Simpson Wong), Talde and Thistle Hill Tavern.

MORE: Coming to America: Ajay Walia
Cheam’s next venture is a restaurant of his own (along with partner Steven Wong), scheduled to open inside Market Line in the Lower East Side’s Essex Crossing development. “There are so many other amazing vendors joining,” he says, mentioning Wildair (“doing a wine bar”), Ample Hills Creamery, Doughnut Plant, Nom Wah (where he orders black bean spare ribs, chicken feet and shrimp har gow) and S.E.A. Market (which sells Southeast Asian products and previously purveyed only to restaurants).

Essex Pearl will feature small plates of sustainably-sourced seafood. “I love to travel and my partner Steve loves to travel,” he says, “so we’re bringing back dishes from our travels and putting a New York feel on it.”

It’s a well-deserved landing for a well-traveled chef.