On November 8, chef Val Cantu of two-Michelin-starred Californios will bring his modern Mexican cuisine to New Yorkers for his residency kick-off at Chefs Club.

“At Californios, our style of cooking is market focused, seasonal cuisine through a Mexican lens,” Cantu says of his cooking ethos. A nightly tasting menu of some 16 courses is served at his 24-seat restaurant in San Francisco’s Mission District. “Beyond that, the core of our philosophy is designing dishes that maximize deliciousness and pleasure.” 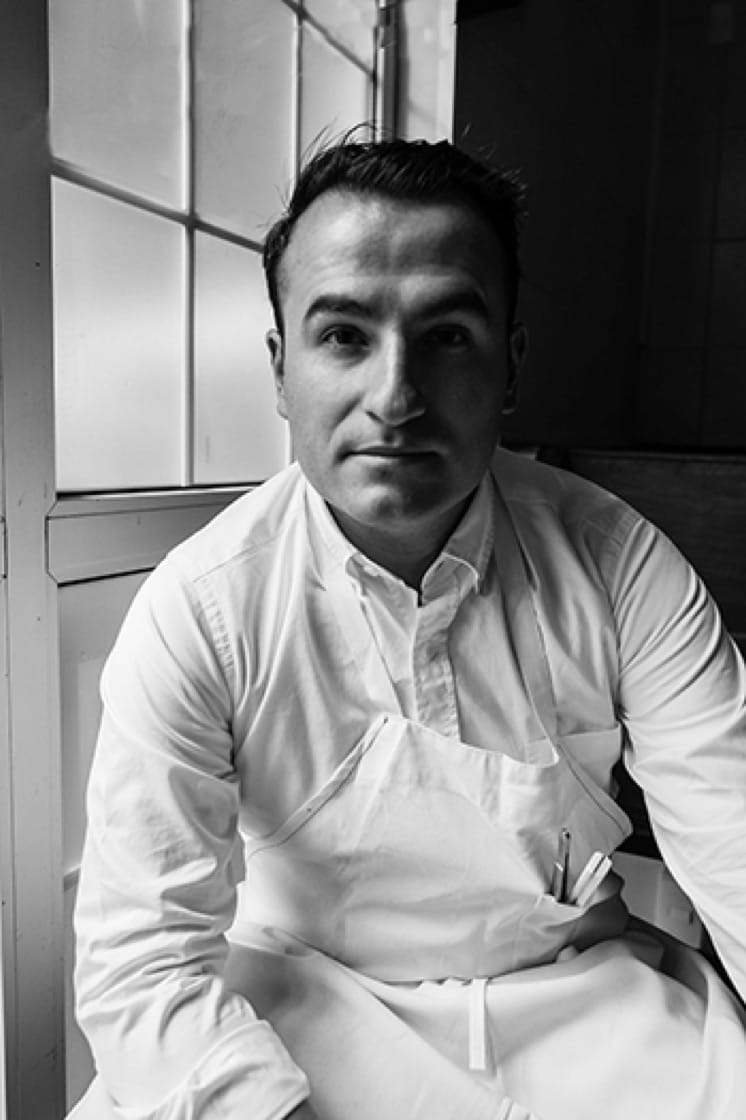 Born and raised in central Texas, Cantu grew up in a household where food was at the forefront—his father owned a Mexican restaurant and tortilleria. Though he graduated from the University of Texas at Austin, Cantu chose the path of culinary arts, working at Tyson Cole’s Uchi in Austin.

He then moved to The City by the Bay, staging at Benu and Saison before landing at Sons & Daughters, where he was on staff when the restaurant earned its first star. “From that moment, I set out to understand what the difference in the categories are,” he says of the MICHELIN Guide. “I believe that the core of the guide is encouraging excellence, deliciousness and hospitality. The MICHELIN Guide is the standard bearer for rating international cuisine.”

Cantu eventually struck out on his own, hosting a series of pop-up dinners while looking to secure a more permanent space; Californios officially opened for business in early 2015. Much acclaim soon followed for the haute eatery run by Cantu, his wife, Carolyn, and his sister-in-law Charlotte Randolph. Michael Bauer gave Californios three stars for his early review in the San Francisco Chronicle, and the restaurant was designated with a Michelin star in the 2016 San Francisco guide, joining the ranks with Chicago’s Rick Bayless and New York’s Cosme Aguilar to boast a Mexican restaurant with the accolade.

His favorite thing to cook? Tortillas. For his restaurant, he sources the masa from a sibling farming team in nearby Santa Rosa. “When I’m making tortillas, I feel connected at a root level to Mexican cuisine,” he shares. “It reminds me of making tortillas with my grandmother [and] dad and what is special about Mexican cuisine.” 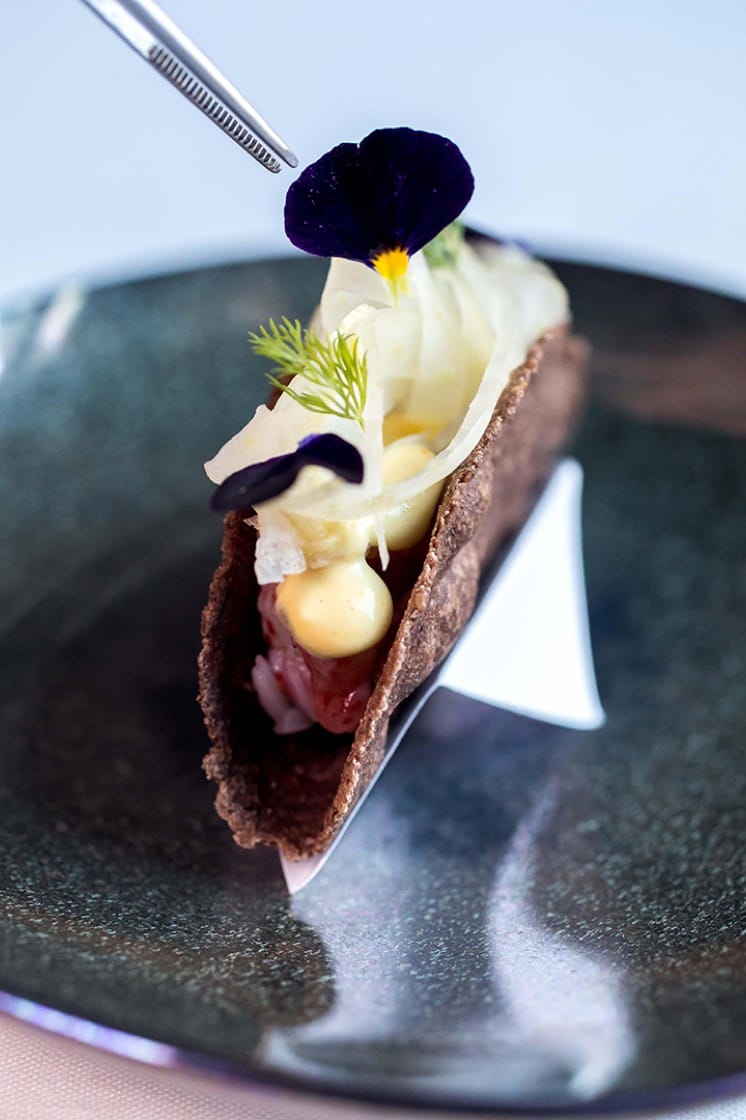 Per the Californios website, "Each ingredient is meticulously sourced and chosen for its concentrated and vibrant flavor, at the height of its season." (Photo by Jim Sullivan.)

Pop-ups and events still resonate with chef Cantu, who has both hosted and been a part of several collaboration dinners over the years. This summer, Cantu hosted a Michelin On the Road dinner with Quintonil chef Jorge Vallejo in Mexico City, preparing dishes that represent both chefs’ styles of cooking using ingredients from the city’s sprawling Central Market.

“We try to only do events that are special or worth our time,” he says. “Cooking with Jorge in Mexico City ... was a huge deal.” It was Vallejo and team’s warm hospitality that reminded Cantu why he started cooking altogether. “I stopped to pause and think. After so much hard work, it’s rewarding to create food together.”

Bringing his inventive Mexican fare to Chefs Club was a no-brainer.

“We are excited to cook at Chefs Club to share with New York a little bit of what we do,” says Cantu. “Our goal is to share our perspective and the flavors we love.” Guests can look forward to things like tres frejoles of aerated royal corona bean mousse with golden osetra caviar—a Californios signature dish—and Monterrey abalone in Mexican rice on the menu. “The menu for the Chefs Club dinners was designed to showcase some dishes that were highlights when they were on our menu at Californios,” he adds. “A couple of them are very similar but most of them are new versions that will be fun for us to execute.” 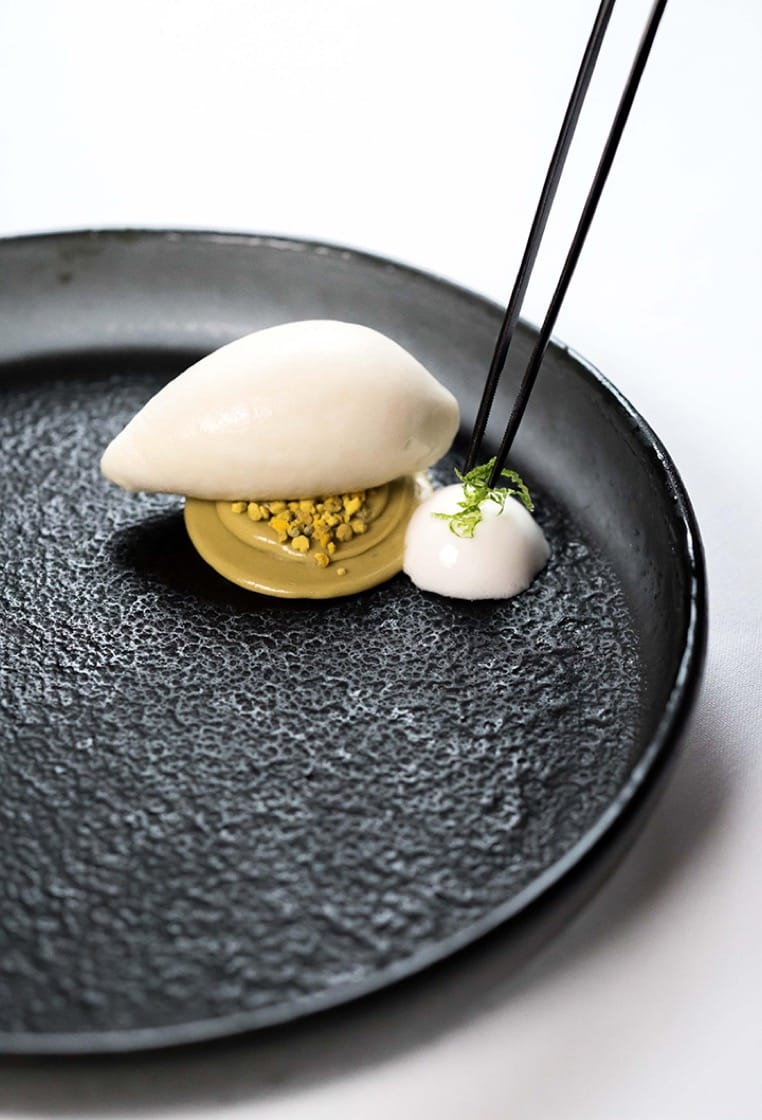 A dessert of white guava and pistachio. (Photo by Jim Sullivan.)

During his downtime in The Big Apple, Cantu’s dining escapades range from a meal at three-Michelin-starred Chef’s Table at Brooklyn Fare to the uber casual Katz’s deli. (His go-to order is the Reuben, matzoh ball soup and extra pickles.) He’s also going on a New York City pizza expedition, hitting up Carlo Mirarchi’s Roberta’s in Bushwick. “I’ve [also] been told that I can’t miss Prince Street Pizza,” he says.

“Cooking anywhere other than your home base is always a challenge,” he continues. “As a chef, I believe it is important to continuously challenge yourself. Forcing yourself to work outside of your comfort zone [while] in a new setting with different equipment makes you think on your feet and gives you that burst of adrenaline that we all felt when we started cooking. That energy is refreshing, and when I return to Californios, I’m always excited to be back and ready to express and explore something new.”