When Mariya Russell agreed to be the chef de cuisine at Kumiko and Kikkō, the latest project from Oriole's Julia Momose and Cara and Noah Sandoval, the full concept for the now upstairs bar and intimate omakase counter in the basement wasn't even set. "Noah asked me if I wanted to do this with him in 2017 when I was still in the front [of house at Oriole], and I was like, 'Yeah, of course,'" Russell says. "I didn't really know what the concept was going to be, I just knew that this was something I was going to be doing, and so I just followed along." That go with the flow attitude led her to guiding Kikkō to receive its first MICHELIN star in the 2020 selection for Chicago.

"Opening this, Noah [and I] always talked about the standard and keeping it and knowing it," Russell says. "I had no idea that we would even qualify because it's a bar." Though upstairs might be more of just a "bar" with a selection of bites available—like Ōra King salmon sashimi with torched lardo, sea grape and toasted genmai—downstairs is a completely different story. "Upstairs you can make your experience what you want it to be. And downstairs we're controlling what your experience is more," Russell says.

"Kumiko is a luxe cocktail den with an array of seriously crafted bites. However, the stellar attraction is located downstairs, in a secreted away room, featuring deep blue walls as well as a dark stone, 10-seat counter," inspectors state. "Diners can look forward to a seven-course menu that flirts with Japanese technique, ingredients and flavors."

Those now heralded "Japanese technique, ingredients and flavors" form a culinary aesthetic that Russell had to learn over time—and continues to explore today. 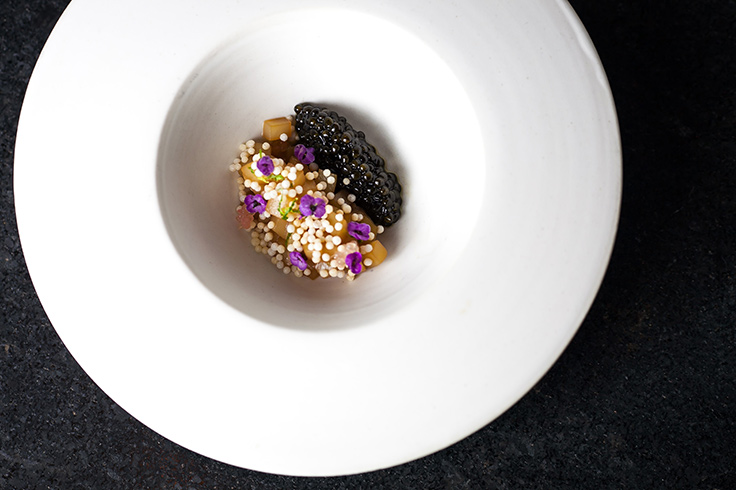 Russell lived in Springfield, Ohio, until she was 14, at which point her family moved to Columbus for her high school years. Like many chefs, her interest in food started at a young age. "I wound hangout with my mom in the kitchen all the time," she recalls. "Cooking was around a lot in my family." The dishes of her youth were a mix of soul food and Midwestern staples: mashed potatoes, fried chicken, rice and broccoli, casseroles and spaghetti. After spending so much time in the kitchen with the adults in her family, a young Russell was bitten by the hospitality bug and got her first taste of cooking for others. "I remember learning how to make myself eggs and wanting to do it for everybody."

In high school, Russell participated in a career academy that first introduced her to the idea of working in a restaurant as a career. "That was my first introduction to working in restaurants and I really liked it a lot," she says. From there she moved to Chicago after high school to attend The Cooking and Hospitality Institute of Chicago (a Le Cordon Bleu school that closed in 2017). 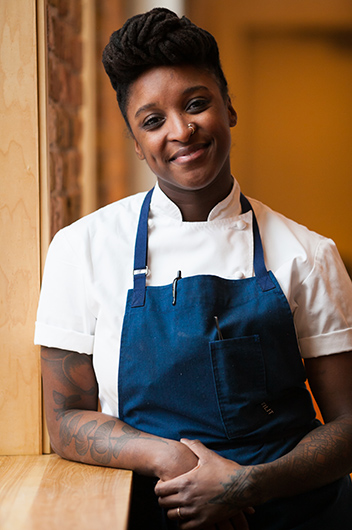 She interned at the Columbia Yacht Club before graduating in 2008. From there she worked at Uncommon Ground, Green Zebra (a Shawn McClain restaurant where she first met Noah and Cara), The Bristol, Nellcote and Senza (Noah's first Chicago restaurant of his own), all in the Windy City. But then, "My husband [Garrett] and I wanted a change of scenery for a little bit." So the two packed up and moved with their schnoodle Scottie (named after musician and fellow Ohioan, Kid Cudi) to Charleston, South Carolina.

The couple spent three years in the city, cooking at various places. (Garrett is also a chef and currently serves as sous chef at Kumiko.) She recalls meeting "some really wonderful people and had some really great times," but also encountered a lot of racism during her time there. That coupled with the death of her father led Mariya, Garrett and Scottie back to Chicago. "The main reason we moved back to Chicago was to be closer to my mom."

"Before I moved I was talking with Noah a lot just to see if I could work with him again," she says of what led her to Oriole in July of 2016. "They didn't have anything in the kitchen, but they did have a back server position open, so I took that." Russell saw it as an opportunity to "learn some front of house stuff," and it was also during this time that Sandoval asked if she wanted to be part of the then yet-to-be-defined project that is now Kumiko and Kikkō. 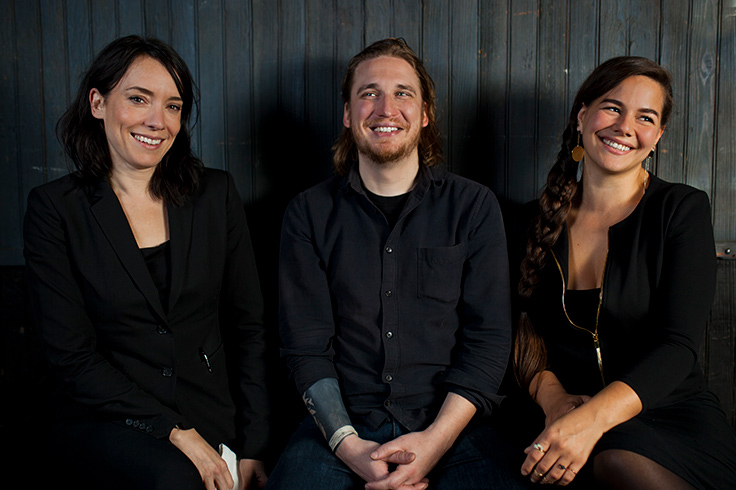 While at Oriole, she moved into the sous chef position after one of the cooks left, and then took over the role of chef de cuisine following the departure of Tim Flores in spring 2018. "Mariya has been a supporting member of my team for a long time," Sandoval says of his trusted collaborator. "Her palate memory and work ethic are through the roof."

Her work ethic shines through in both her food and leadership.

"When I found [out the concept] was going to be what it is, I just dug really deep into Japanese cuisine," Russell says. "A lot of the chefs that I've worked for have had small amounts of Japanese influences in their cooking: philosophy, simplicity, purity and not using too many ingredients." In terms of focusing on Japanese cuisine, "It wasn't that difficult of a transition for me—I just had to practice and learn a good amount of things on my own." That included lots of research, experimentation and conversations with the team, especially Julia Momose. ("She lived there and knows a lot about the cuisine.")

One of her favorite ingredients to use is shiokoji, a fermented liquid made from koji, the mold used in sake making. "It's salty and sweet and really savory—I use it for a lot of stuff," she says. "[At Kikkō] I use it on the Ōra King salmon sashimi with togarashi and puffed skin." As for other dishes, inspectors note "inventive items [such] as house-made tofu with ramps, pickled green almonds and an intense dashi" in their description of the omakase menu at Kikkō. 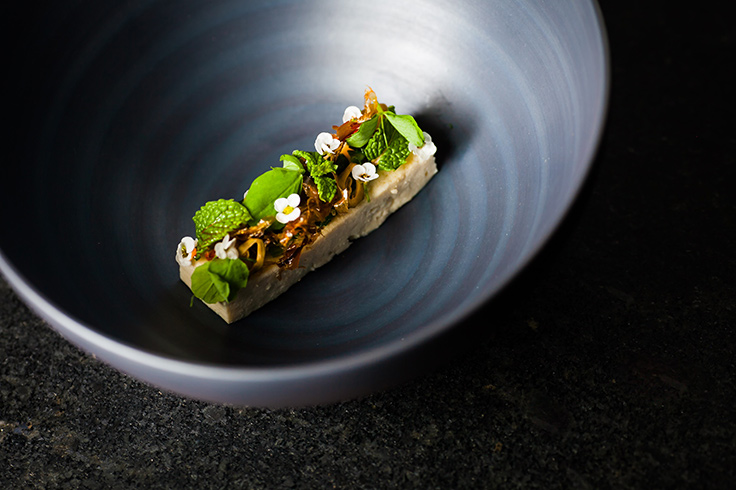 "Respecting the product is a huge thing for us," Russell says of her and the team's food philosophy. "From A to Z, doing everything to the best of your ability with the intention of our view of perfection. Trying to make everything as perfect as it can be . . . from the time you get it through the door as a product to manipulation to the time the guest gets it," she says.

"Noah spends a lot of time at Oriole, so it's very cool that he trusts me to do everything here properly," Russell shares about bearing the responsibility of overseeing the MICHELIN-starred kitchen. And when you ask Sandoval: "It’s nice to be able to trust and rely on someone so talented to run my second restaurant with such precision."

Though chasing perfection can often lead to stress, burnout or a chaotic work environment, Russell describes herself as "very reasonable" in managing her team and tries to lead by example. "I try to make [the guest] experience the best it can be through my management of my team, . . . to create the best work environment I possibly can [while maintaining our] standards." At the end of the day, she wants her team to "be as happy as they can be."

It seems this is Russell's way of paying forward the mentorship and friendship Sandoval has given her over the years. "[I want people to know] just how important Noah Sandoval is to me. He's taught me a lot, but is also my big brother and cares about me. I feel very grateful for that because I know in this industry it can be the very opposite of that at times." From Sandoval's point of view: "I embrace the opportunity to support her here at Kikkō."

The journey from aspiring cook to chef de cuisine at a MICHELIN-starred restaurant can be arduous for anyone—but it isn't lost on Russell what it means for her to do so as a Black woman. ("I knew this was coming," she laughs when I bring up the topic.)

"Thinking about [being] the only Black woman doing this is really, still very much so, blowing my mind. Representation is really important in all kinds of things, but in an industry like this, I think it's really cool. It's not an easy industry to work in, so I understand why people don't do it, but to be recognized for my hard work, but on top of that also being a Black woman is really cool," she shares. "I'm very grateful for my journey. It hasn't been very easy—at all—but I'm really grateful for all the people that have crossed my path and taught me something."

But through all of the ups and downs, what is Russell's end goal? "Happiness is a huge thing for me. It's always at the top of my list of things I want to make sure I am—now and in the future."