Like a number of modern Korean food inventions, jokbal was born out of necessity and survival during the post-war era. Although Koreans have been consuming pig’s trotters way before the advent of this popular dish, jokbal—as we know it today—is presumed to have been introduced in the 1960s by Lee Kyeong-sun, a North Korean refugee and home cook who ran a hole-in-the-wall eatery with her sister-in-law in Jangchung-dong, Seoul, where a large population of displaced refugees settled after the war. The two ladies started out by selling mung bean pancakes by the slice for 10 won (literally a penny) and, eventually, jokbal. Why jokbal? Pork had been a staple in North Korea, trotters were a cheap cut of meat, and fellow refugees and customers—nostalgic for food that reminded them of home—requested it.
So what exactly is a jokbal, then? Jokbal is a dish of pig’s trotters that have been boiled in a soy sauce-based braising liquid. Once cooked, the meat is deboned, sliced and served with fresh lettuce leaves, sliced raw garlic, green peppers, soybean paste and salted fermented shrimp (commonly served with pork dishes in many parts of Korea for its digestive properties) for dipping.

What ultimately makes or breaks the dish depends on several factors. They include the quality of the trotters used, the method of meat preparation prior to and during cooking and the braising liquid. Some of the older restaurants claim they still use same braising liquid they’ve been boiling the meat in since day one.

One of the key factors restaurants pay close attention to is taming the “porkiness” of the cut—this is where the aromatics come in. While many restaurants take pride in the elaborate list of ingredients they use, including medicinal herbs (like goji berries and gardenia seeds) and spices (like star anise, cloves, fennel, cinnamon, black peppercorn), many others prefer to keep things simple and straightforward. But all restaurants will rely on aromatics such as garlic, green onions and ginger to get rid of any unpleasant odours. Soaking the trotters in cold water for a few hours to draw out the blood and parboiling them to get rid of impurities are also considered necessary steps to eliminate any meat funk.

Jokbal can be served either warm or cold, and an order of jokbal is meant to be shared. Restaurants will typically offer two different portions: medium and large. Each order will come with a pile of boneless meat that has been sliced over chunks of meaty bones—best enjoyed by picking them up with your fingers.

Here are three jokbal restaurants that received a Bib Gourmand nod in the 2018 MICHELIN Guide Seoul. See what our inspectors had to say about them. 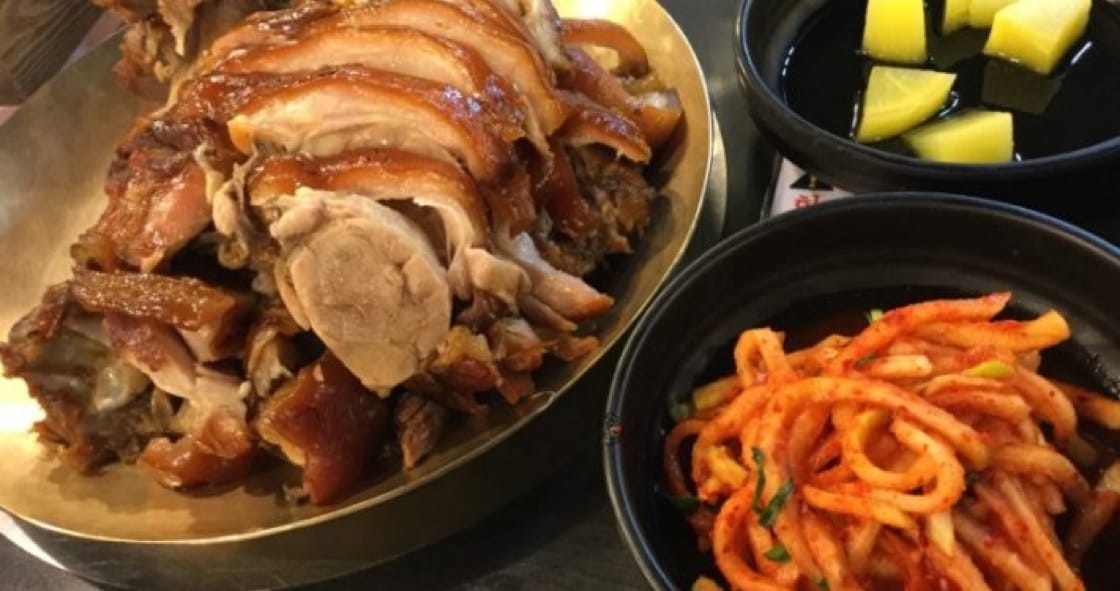 Manjok Oyhang Jokbal
"At Manjok Oyhang Jokbal, the beloved Korean pork trotter dish is done right with the utmost dedication and care to hygiene and quality. The restaurant, armed with a systematic central distribution system and a comprehensive logistics system, offers consistent quality at all of its franchised locations. Here, the popular pork dish can be enjoyed warm until the very last piece thanks to the specially-designed hotplates installed into the tables." 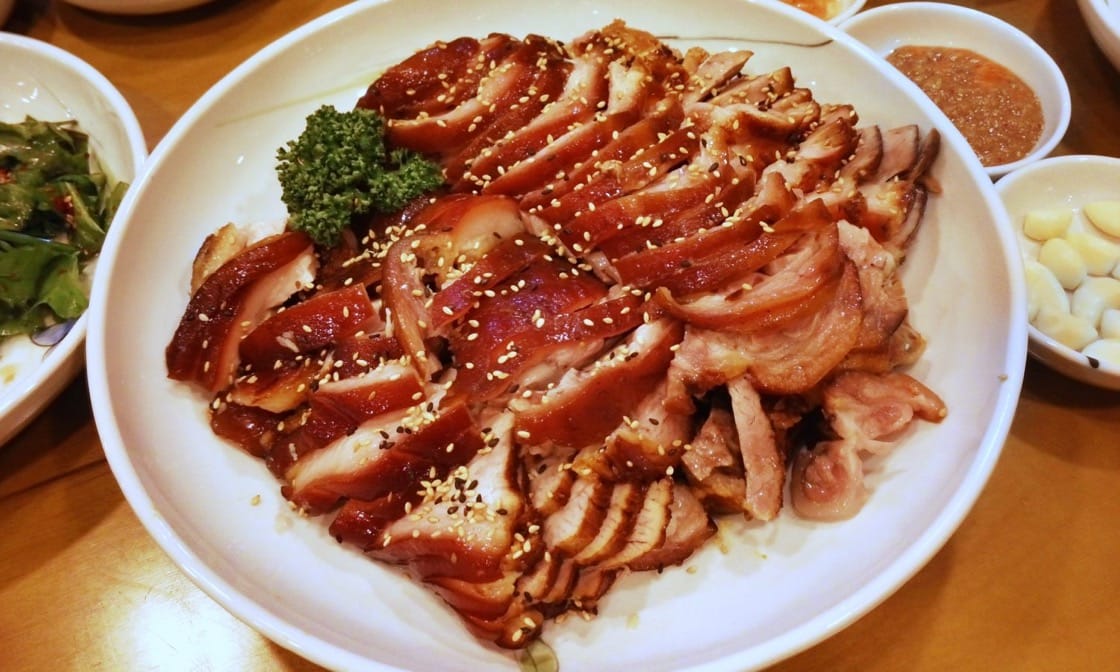 Ogane Jokbal
"This seemingly nondescript restaurant has been drawing customers by word of mouth for its meaty and gelatinous boiled pig’s trotters since 2007. The business exploded, and the restaurant operated four additional locations nearby at one point, but chose to just focus on the original location in the name of quality control. Boiled pork belly and chilled buckwheat noodles in kimchi broth are also popular items on the menu. Open till late." 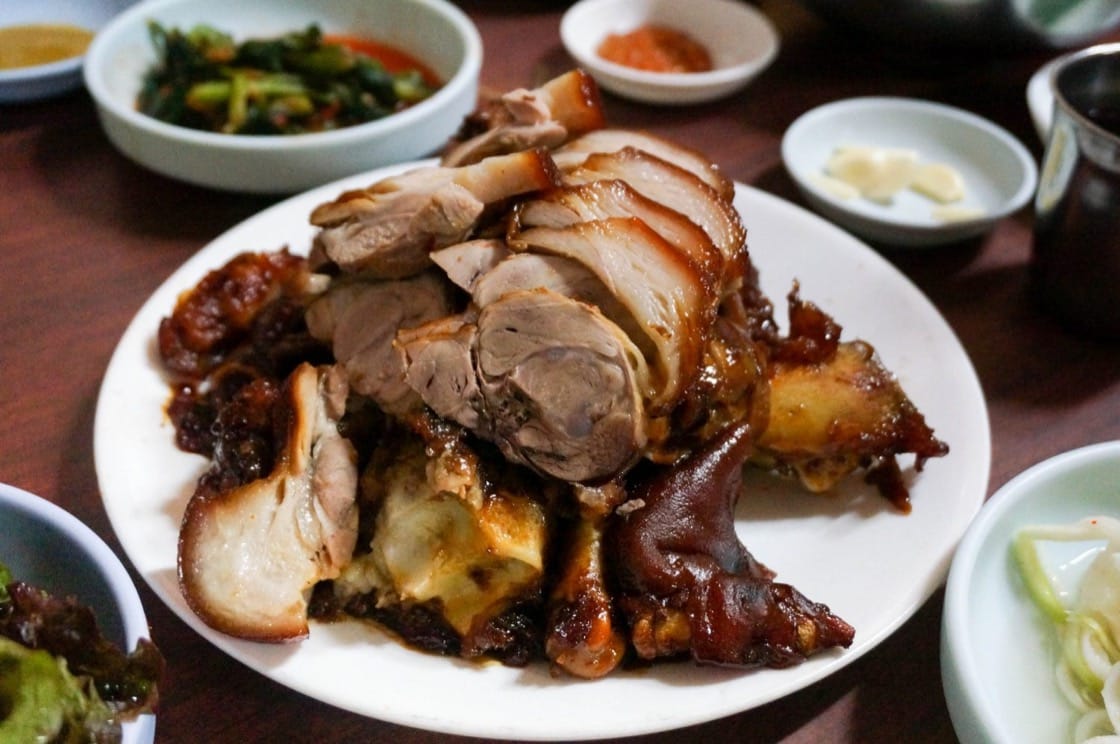 Halmaejip
"The original matriarch who opened this restaurant is still the heart and soul of the kitchen which has been dishing up legendary pork back bone stew and boiled pig’s trotters since 1975. Chili powder is the only spicy agent used to add the pleasant kick to the taste. It’s a common sight to see Mrs. Mun walking around, showing her patrons how to eat her stew 'the right way'."