Get to know this humble bowl of braised pork rice beloved by the Taiwanese.

Few things are more representative of Taiwan’s everyday street food than a bowl of braised pork rice, locally known as lu rou fan. If done well, it could keep a street food stall in business for generations. On the other hand, a vendor dishing out a subpar bowl of minced pork rice is less likely to get other dishes right.

In Taiwan, lu rou fan means braised diced pork with its sauce poured over rice. Versatility explains its omnipresence. The braising sauce would often be used on noodles and blanched vegetables.

There are also regional differences. The same lu rou fan is known to the Southerners as rou zao fan. In central Taiwan, a generous slab of pork belly is served on lu rou fan instead of mince. When you walk into any Taiwanese eatery, chances are you will see lu rou fan as an alternative option to plain rice. 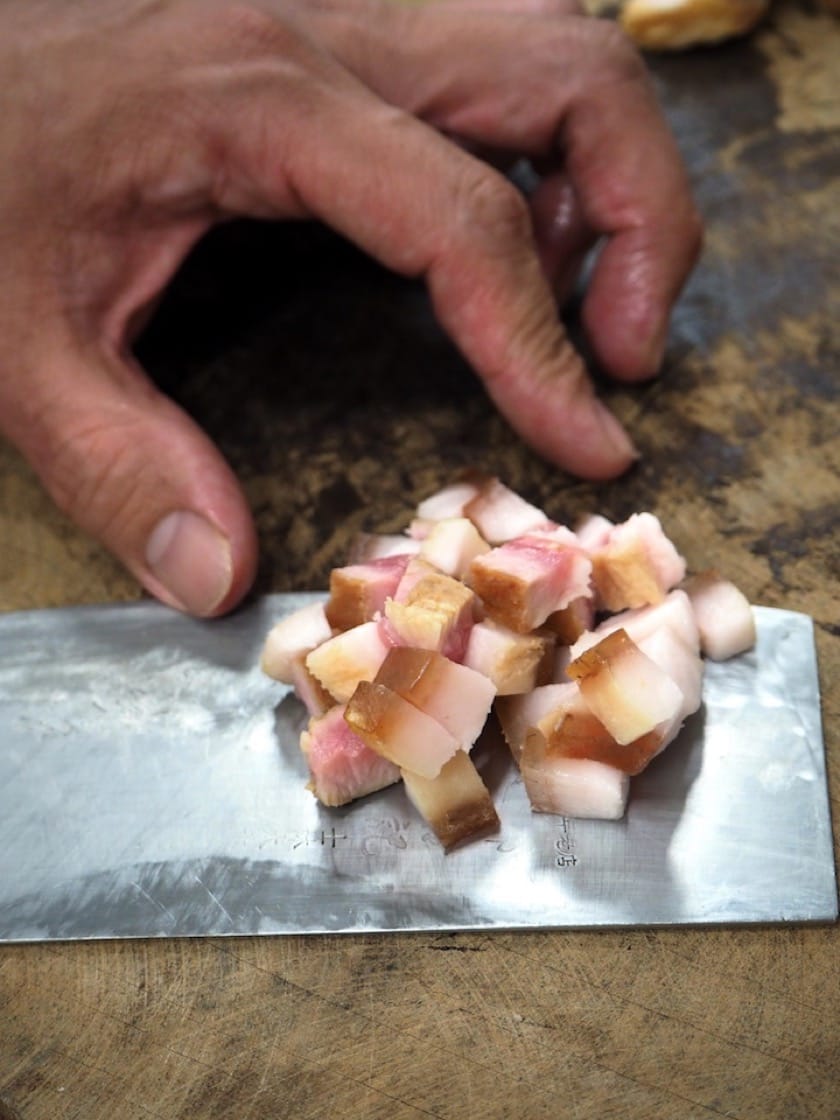 A delicious bowl of lu rou fan boils down to three key components: the meat, the sauce and the rice. Regarding the meat, vendors in the early days took all unwanted cuts of pork, fatty or lean, minced together for cooking. The dish itself was born out of necessity, with nothing going to waste. These days, as the dish ascends to the canon of street gastronomy, which cut to use becomes a question that takes cooks some time to think about.

Chef Chen Yong-hua from Mipon, a MICHELIN-plated restaurant located in the Grand Mayfull Hotel Taipei, shows us how lu rou fan is made. In general, pork belly or neck is used, and there is even a local saying which praises the latter’s aroma. Pork neck with the golden ratio of 70% fat and 30% meat is ideal.

The meat needs to first be blanched in hot water and cut into small cubes of half a centimetre. Aside from removing the raw smell, blanching also makes cutting easier to obtain uniform pieces. The pork cubes are then stir-fried in an oiled wok. Soya sauce, rock sugar, stock, rice wine, pepper powder and deep-fried shallots are added one by one before the mixture is simmered on low heat for three hours.

“Because there’s sugar and soya sauce, we need to stir the mixture once in a while to avoid burning at the bottom. On another note, braised pork rested overnight is the most aromatic,” Chen explained. 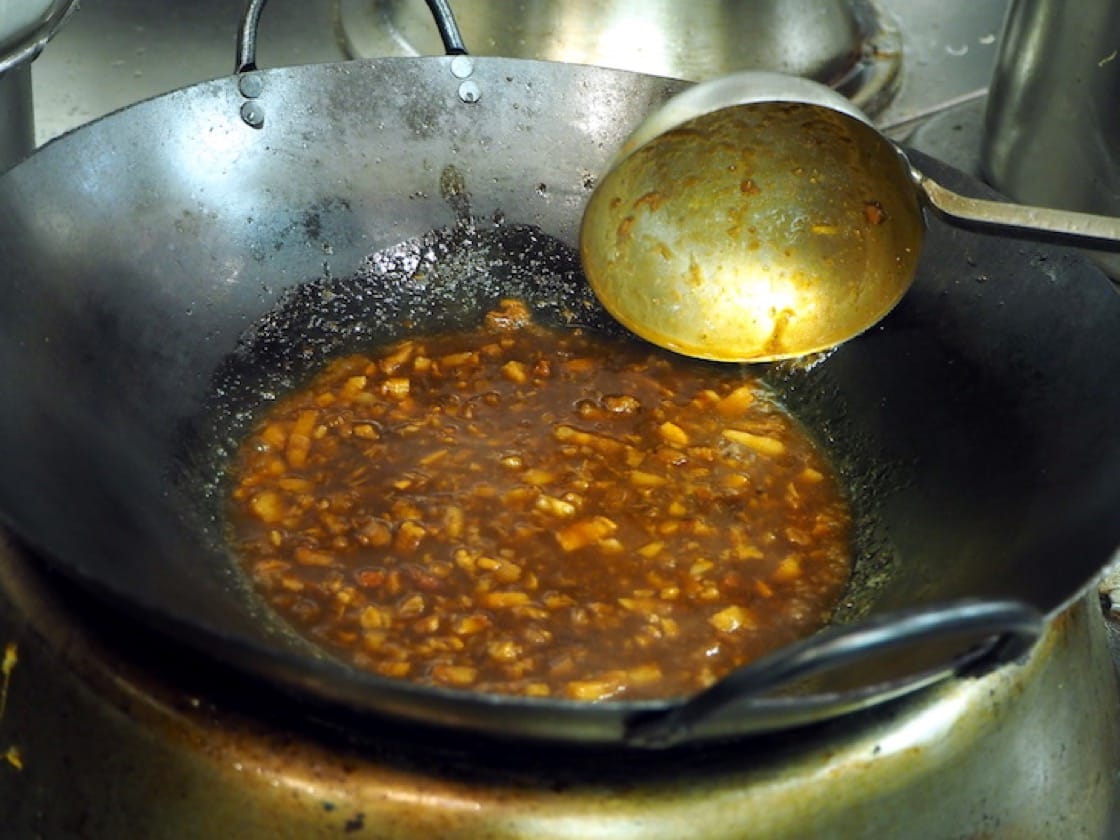 The rich, sticky braising sauce would be absorbed by the rice. (Pic: Chen Ching-yi)

Just as important is the braising sauce. To thicken it, Chen’s secret recipe employs twice as much diced pork skin as the meat. While cooking, the collagen in the skin melts and makes the sauce extra gooey. So rich is the sauce that it drips downwards in a bowl slowly and gets absorbed by the rice. Every bite of the rice is sticky and filled with the fragrance of the cooked pork. On the top of the braising sauce there is also a thin, golden layer of oil, which should by no means be skimmed off. This oil is the lard released from the fatty pork. It helps to block the entrance of air into the sauce to keep it warm and protect the meat from darkening. 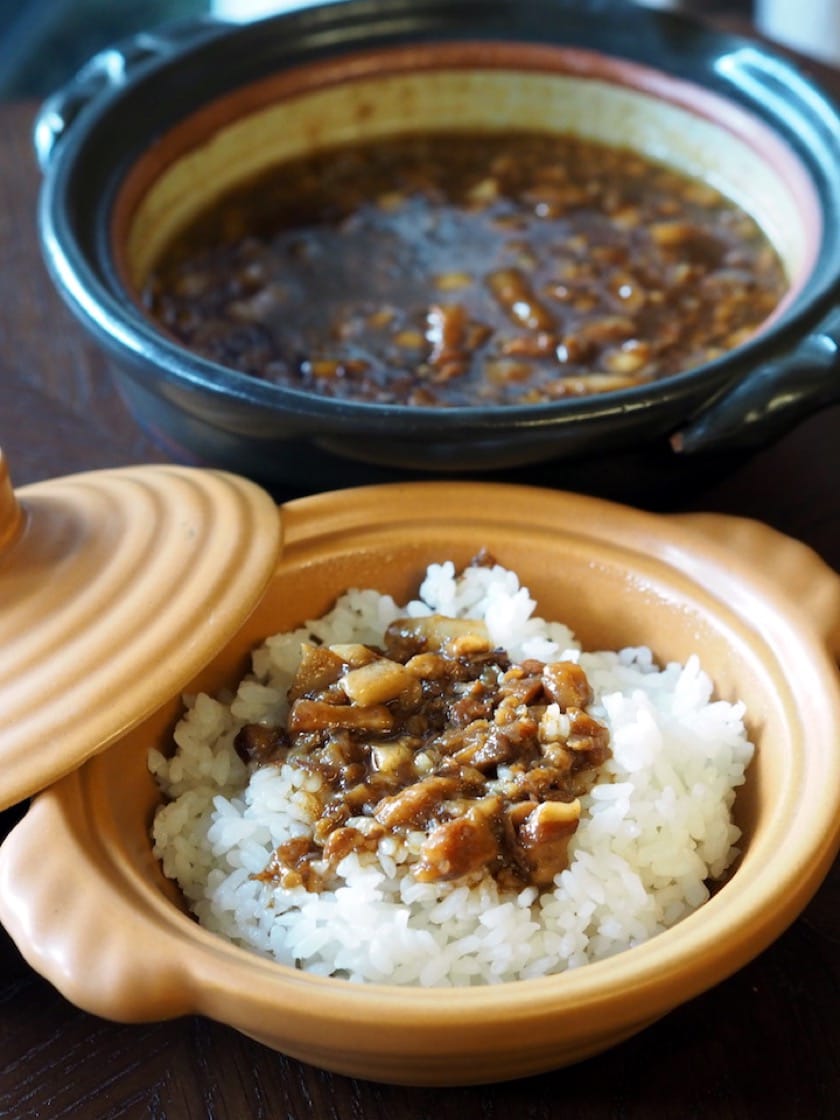 Due to its substantial nature, lu rou fan is best eaten as a snack rather than something to gorge on (Pic: Chen Ching-yi)

Rice serves as a vital final touch. It has to be hot enough to melt the pork cubes and take on their aroma as one mixes the rice bowl. In addition, there shouldn’t be too much rice. Lu rou fan is such a heavy fare that a large portion could overwhelm the taste buds. In terms of texture, the rice needs to be firm and slightly dry. Some vendors would add a small amount of sticky rice to help absorb the sauce. They need to find the right proportion between rice and sauce as well. Excessive sauce makes the rice bowl too salty and wet. On the contrary, the rice would be too dry with not enough sauce.

And there you go: the braising sauce poured on top of rice together with shiny pork cubes that maintain their shape after cooking, bursting with aroma. Who can bring themselves to say no?

This story is written by Chen Ching-yi and translated by Vincent Leung. Click here to read the original article.
Advertisement
Advertisement