Luscious strips of Ohmi A5 wagyu from Japan’s Shiga prefecture sizzle gloriously for a few seconds before they are cut to reveal a plush pink inside. Cooked a la minute in front of diners sitting in front of the sleek custom-built grill, the margin for cooking error is razor-thin as the beef slices are seared before a light sprinkling of salt and pepper is dusted on them.

Ditto for the delicate slabs of pan-seared ayu that are deftly grilled at the just right temperature, which yields a crisp and crunchy skin that elevates the sweetness of the sweetfish.

These minute details speak volume at these two signature dishes at the two-MICHELIN-starred Japanese-European fine-dining restaurant Waku Ghin at Marina Bay Sands. From precise cooking techniques to impeccable service, consistency is paramount in the restaurants of chef Tetsuya Wakuda, who first shot to worldwide fame with Tetsuya’s Restaurant in Sydney.

Ask the Japan-born chef on how his exacting standards are maintained at Waku Ghin over the past decade and he replies in a heartbeat: “It is about training, commitment and passion. That’s everything. Unlike most restaurants, my team ends work very late. They have worked for me for a long time so they understand what needs to be done and deliver it.”

The MICHELIN Guide Insider Series: Perfection in Every Cup

Having a consistent quality of food and service is sacrosanct to Wakuda, given that he shuttles frequently between Singapore and his adopted hometown of Sydney, where he has been based for more than three decades.

Wakuda also adopts the same mantra of consistency when it comes to coffee, which is one of his favourite beverages.

The self-confessed coffee aficionado sheepishly admits that he drinks “far too much coffee than he should”.

“I will have 10 cups at least in a day,” he reveals with a smile. “For me, it is a habit.” He adds: “Having coffee gives me a bit of a boost. I think about what I want to do, check through my diary, then start my day.”

“Running a good restaurant is all about consistency in food quality, service and coffee,” he says. “When you go to a restaurant, people always remember the first dish. And the last thing they remember after dessert is coffee. It has got to be good.” 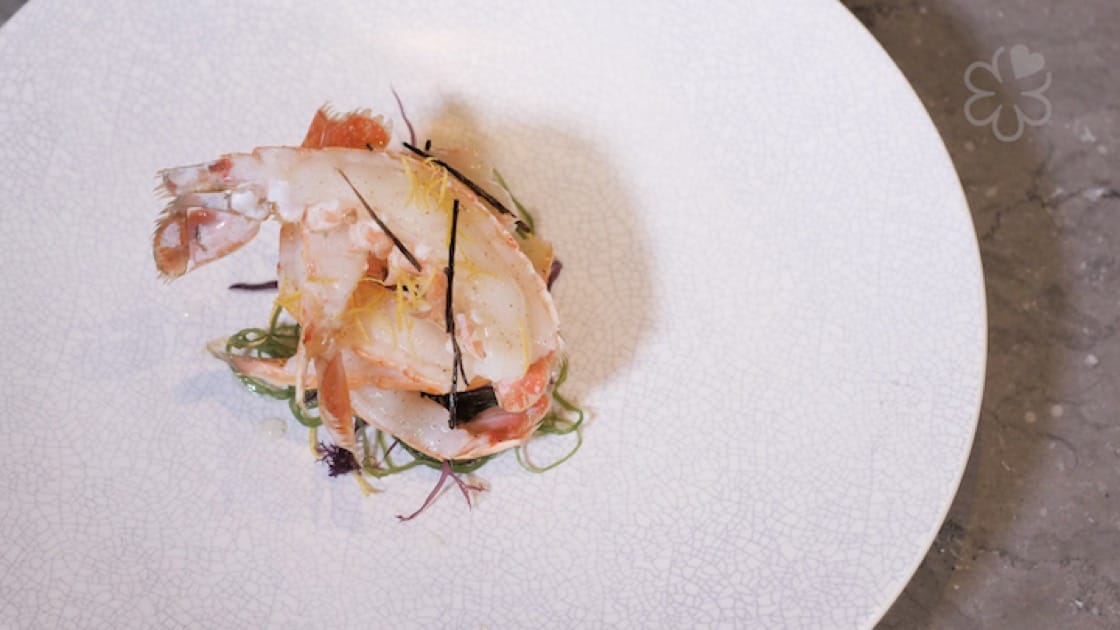 Roast New Zealand Scampi With Kenya Milima and Vanilla Bean Oil pits the bitterness of the citrus-like coffee against the sweetness of the seafood.
With his ardent zest for a good cuppa, Wakuda says that pairing Nespresso coffee with his dishes comes naturally. He says: “Like food, the first thing about coffee that attracts me is its seductive smell.”

He points out that coffee and shellfish make a compatible match and shows how the bitterness of the java complements the seafood’s sweetness with his creation of Roast New Zealand Scampi With Kenya Milima and Vanilla Bean Oil.

The succulent scampi is drizzled with a white sesame seed oil infused with the Kenya Milima, which is the latest addition to Nespresso’s Exclusive Selection range of coffee that is only available in MICHELIN-starred restaurants. The Kenya Milima coffee beans, which are grown on rich volcanic soils in the Kenyan highlands, have distinctive juicy, lemony citrus-like notes.

Tapping on the Kenya Milima’s fruity flavour, he incorporates the java into the vanilla bean-infused cold-pressed white sesame seed oil. He gently drizzles the coffee-tinged oil over the plush pink New Zealand scampi. He garnishes the scampi, which has been roasted precisely at 230 degrees Celsius, with ribbons of ogonori seaweed. On the coffee pairing, he says: “The coffee, with its bitterness and aroma, is a nice pairing with the sweetness of the shellfish. With a little bit of lemon zest, it is a good match with the coffee.” 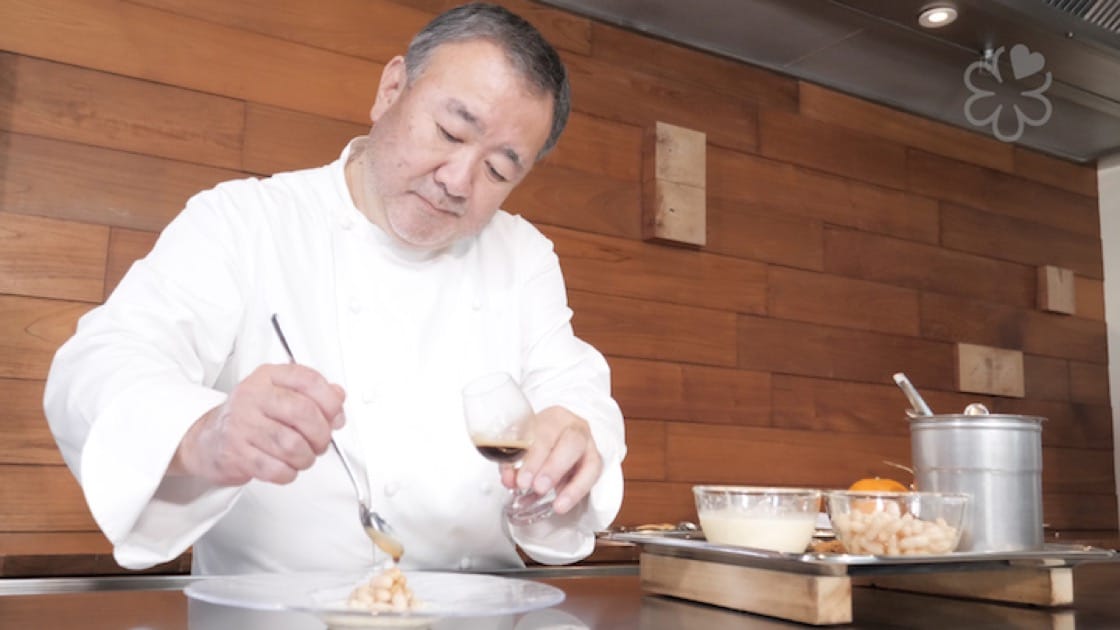 Chef Tetsuya Wakuda drizzles the Nespresso Exclusive Selection Nepal Lamjung over cannellini beans.
Wakuda uses another coffee from Nespresso’s Exclusive Selection, the Nepal Lamjung, in the Cannellini Bean dessert. Here, he juxtaposes the intensity of the rare Arabica beans that are grown in the Himalayan foothills with the sweetness from the coffee and vanilla-infused cannellini beans.

He adds that these beans, which are often used in savoury dishes in Western cuisine, can also be incorporated into desserts in Asia, given that people here are familiar with having red beans in sweet treats.

He boils the kidney-shaped beans with water, sugar, vanilla beans and a touch of salt until they become tender, and purees a portion of them. Then, he scoops a dollop of chewy, fluffy beans onto a plate of velvety creme anglaise and pours a ristretto of Nepal Lamjung over the beans.

The coffee beans, which are cultivated by about 3,200 smallholder farmers in Nepal, carry notes of freshly toasted bread and feature a supple texture. Wakuda adds: “The roastiness of the Nepal Lamjung is very strong. It is almost like a first extract. Its intensity cuts through the sweetness of the cannellini beans.” 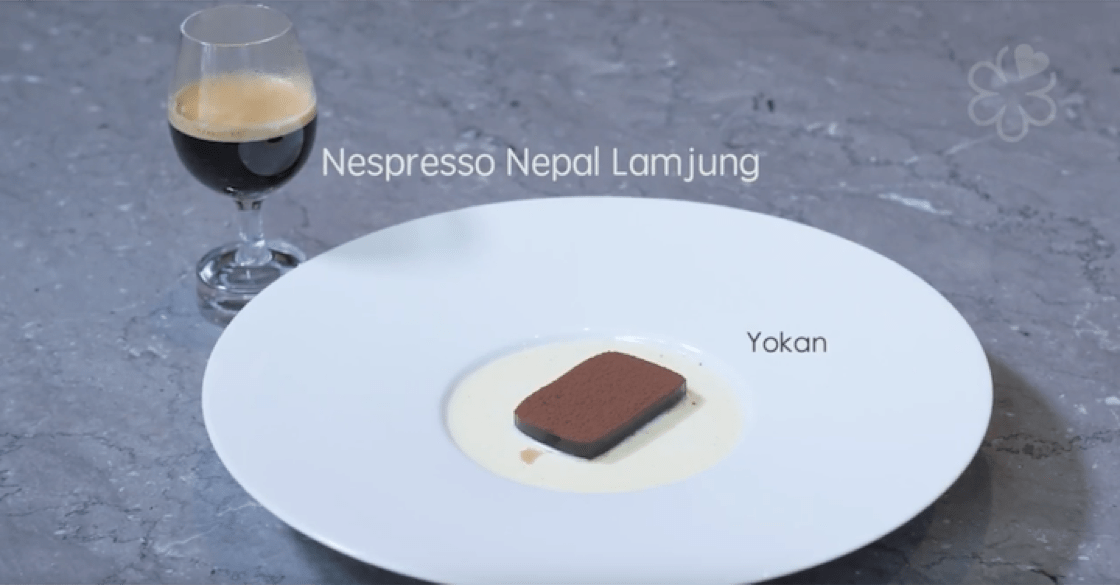 Yokan, which is one of chef Tetsuya Wakuda's favourite sweets, is slathered with the Nespresso Exclusive Selection Nepal Lamjung for a bitter touch.
To showcase the versatility of the Nepal Lamjung, Wakuda slathers the robust coffee on Yokan, a traditional Japanese red bean jelly, which is one of his favourite sweets. For a final finishing touch, he dusts bitter cocoa powder over the jelly, which resembles a chocolate bar, before placing it at the centre of a plate laden with creme anglaise.

“Even my pastry chef thinks that it is an odd idea,” Wakuda says. “But this is a simple and clean dish that tastes good."

“Whether you use roasty or fruity coffee, it works either way, as long as you use good coffee.” 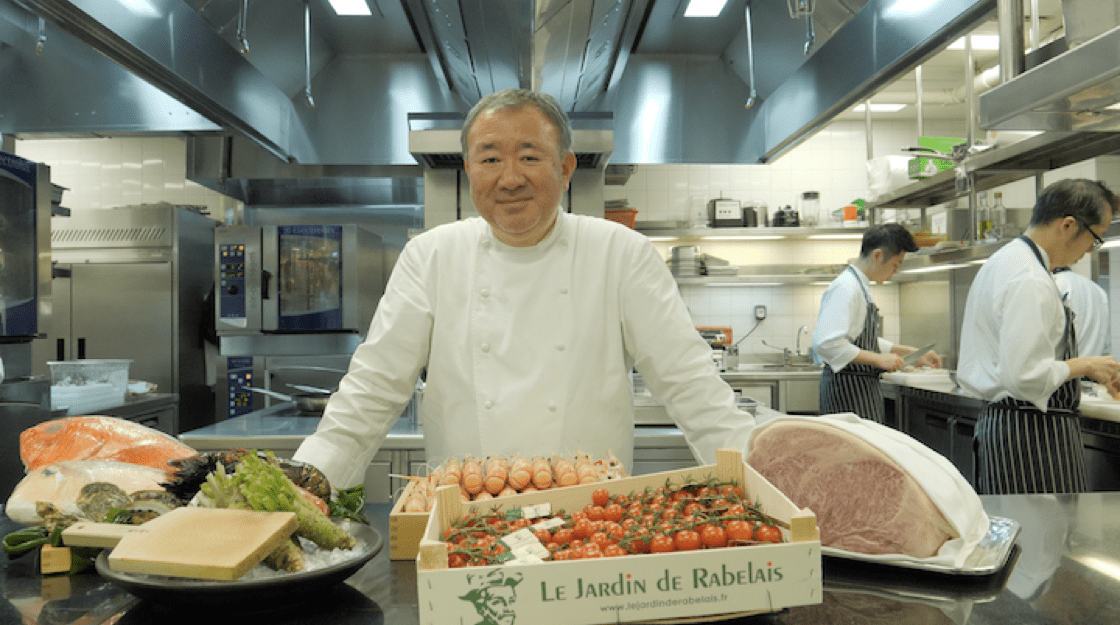 Wakuda also keeps a watchful eye on the quality of in-season ingredients in Waku Ghin, which are flown in from all over the world — live abalones from Tasmania, oysters from Brittany and wasabi from Shizuoka in Japan, where Wakuda was born. He relishes discovering ingredients around the world. He says: “People think that it is about having a passion for cooking, but one needs a have passion for eating first. I love to eat.”

In a similar vein, Wakuda appreciates the quality of Nespresso coffee. The Kenya Milima has a wonderful acidity thanks to its unique mountainous terroir of lush volcanic soil found from 1,400 to 2,000m above sea level that results in extreme differences in temperatures during the day and night. Cultivated in an unlikely coffee region in the north of the equator, the rare Nepal Lamjung is hand-harvested, washed and dried in the backyards of farmers.

With its robust focus on maintaining consistency and quality of its food and service, it is little surprise that Waku Ghin has been regarded as one of the most-lauded restaurants in Singapore.

On what makes a perfect dining experience, Wakuda, who has been running restaurants for more than three decades, says: “At the end of the day, it is about seeing your guest leave with a big smile.”

Likening a dining experience to a piece of art, he says: “We are here to recreate good memories so that diners to keep coming back.”

Nespresso Exclusive Selections are only available in MICHELIN-starred restaurants around the world.