In this interview, he shares his thoughts on The MICHELIN Guide Singapore 2019 Selection and the local dining scene, and sheds some light on the dynamic inspection process.

READ ALSO: Chefs From Three-MICHELIN-Starred Restaurants In Singapore React On The Crowning Moment 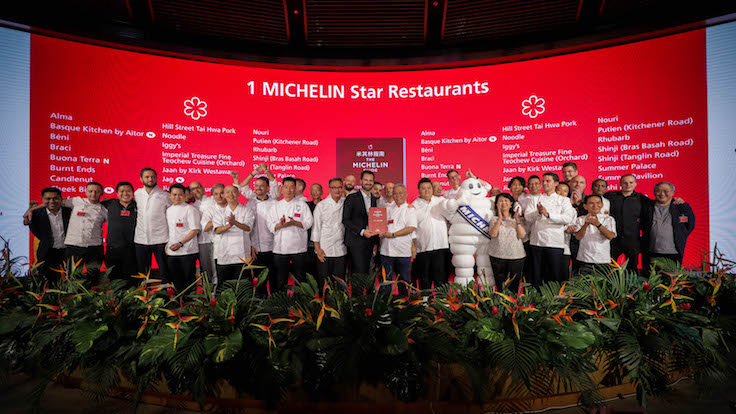 Representatives of one-MICHELIN-starred restaurants on stage with Poullennec and the Bibendum mascot at the MICHELIN Guide Singapore 2019 Star Revelation and Gala Dinner.
There are plenty of changes in this year’s MICHELIN Guide Singapore Selection 2019. What does this say about the Singapore restaurant scene?
2019 is definitely a vintage year for Singapore. The selection reflects the diversity of the vibrant local food scene. Today we can say that Singapore is part of the premier league amongst the international culinary destinations.

Singapore finally has two new three-MICHELIN-starred restaurants. Can you comment on them?
These two restaurants are local success stories. They are offering both international and French cuisines so that also tells us that Singapore is an international culinary hotspot, where you can find fine-dining, from the three-MICHELIN-starred level, to the very simple, down-to-earth street food.

What does it take for a restaurant to get promoted from 2 MICHELIN stars to 3 MICHELIN stars?
Two stars means ‘worth a detour’, while three stars means ‘worth a trip’. When the inspectors look at restaurants, they always go back to the five criteria: the quality of the ingredients, the mastery of cooking, the harmony of flavours, the personality of the chef through the cuisine and the consistency both over time and across the entire menu.
Advertisement
Advertisement 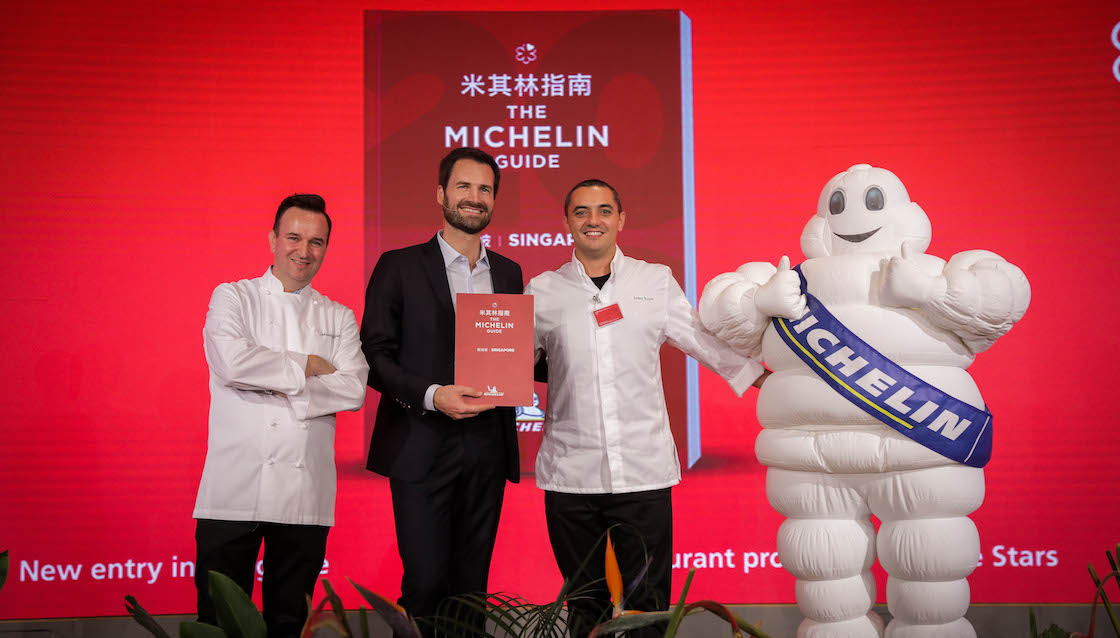 Singapore welcomes two new three-MICHELIN-starred restaurants, Les Amis and Odette, which were promoted from two to three stars this year. Pictured on the right and left of Poullennec are Sebastien Lepinoy and Julien Royer.

Some restaurants in this year’s selection have changed addresses and continued to receive stars, while some chefs have left MICHELIN-starred restaurants to start their own restaurants. So what does this tell us about the MICHELIN Guide inspection process?
The local food scene is exciting with a lot of changes. At the one-MICHELIN-starred level, there are a lot of restaurants that have opened this year. This means that the inspectors have to be always on the alert and on the field to make sure that no stone is left unturned. That’s part of the excitement for the inspectors. When they are out on the field, they are coming back to the existing places. But they are always pushing all the doors to ensure that we discover and reveal all the new places.

How do the inspectors get their news about the dining scene?
The inspectors have to be very open-minded. They look at the different sources of information available without limits to make sure that they receive all the news. At the end of the day, they have to be on the field to test all the restaurants.

All the recommendations by the MICHELIN Guide are made only based on anonymous visits by professional teams of inspectors. All teams are made up of more than 15 different nationalities of people with different profiles. When we make the selection in Singapore, we involve local, as well as international inspectors, as people who come to Singapore are from all around the world.

Over the years, the MICHELIN Guide has celebrated Singapore street food by recognising many hawker stalls, from its Plate and Bib Gourmand to MICHELIN-starred distinctions. What would you say to the many Singaporeans who are still hoping to see more hawkers being recognised with MICHELIN stars?
This year, we have new hawker centres and street food (stalls) within the MICHELIN Guide selection. Street food (stalls) and hawker centres are definitely places of interest as they are part of the local culinary scene. Thanks to the stars, these restaurants are now recognised on a worldwide level.

The Singapore edition of the Guide turns 5 next year. What can diners look forward to?
Every year at the MICHELIN Guide is a brand new selection. It is something for a restaurant to earn one MICHELIN star, but you also have to retain it. The inspectors spend 12 months in a year to canvas the city to make sure that we are highlighting all the places of interest for the foodies, both locally and around the world.

The MICHELIN Guide is always on the move and every year, we are expanding the Guide. Earlier this month, we announced that the MICHELIN guide will land in Beijing on 28 November. We have a lot of plans and will reveal them step by step.