The MICHELIN Guide Singapore 2019 Star Revelation and Gala Dinner was held on the evening of 17 September. Themed “Kitchens of Progression”, the gala paid homage to the global trend of sustainability, which also marks a shift towards sustainable dining and culinary practices. Together, a star-studded roster of chefs presented a six-course dinner inspired by an environmentally-friendly ethos. 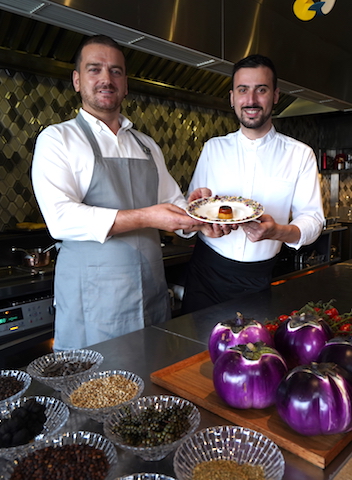 Chef-restaurateur Beppe de Vito (pictured, left) of one-MICHELIN-starred progressive Italian restaurant Braci is known for championing Italian produce and flavours in his culinary career that has spanned more than two decades in Singapore. He is also the owner of the ilLido Group, which runs five restaurants including the MICHELIN Plate Aura.

For de Vito’s dish at The MICHELIN Guide Singapore 2019 Star Revelation and Gala Dinner, the Italian chef is bringing childhood flavours to the fore. These food memories centre around dishes such as wood-fired baked bread topped with oregano and caramelised tomatoes. He relishes the small details such as how the juice from the tomatoes leak into the bread and flowed around the pan. Inspired by other classic Italian ingredients, such as eggplant and Datterini tomatoes, he has come up with an inventive appetiser that is inspired by seasonal ingredients during summertime in the Mediterranean.

What is the dish you presented for the MICHELIN Guide Singapore 2019 Star Revelation and Gala Dinner?
It is Datterini, Eggplant And Almonds. The dish is basically like a bruschetta — the base is a bread-like pancake, which is made from the Pane di Altamura dough. Like a parfait, the stuffing has four layers — starting from the bottom is almond cream, followed by roasted eggplant, tomato coulis and liquid. The dish, which is drizzled in fermented truffle water, melts in your mouth like molten lava. I hope that diners will enjoy our dish and it will remind them of what Braci is all about — with one foot in tradition, and the other one is progressive and forward-looking.

What was the inspiration for your dish?
The dish incorporates ingredients that are typical during summertime in the Mediterranean. They include Viola eggplant and Datterini tomatoes, both from Sicily, almonds and oregano from Puglia in Southern Italy, where I am from.

I am also inspired by one of my best food memories — a wood-fired baked bread topped with tomatoes and oregano. I thought about presenting classic Italian ingredients in different textures. For example, the eggplant is cut, salted and pressed before it is baked and basted with a jus made from vegetable trimmings. For the tomatoes, they are baked with olive oil and oregano. Through this dish, I hope to showcase complementary flavours and textures — the sweet and moreish almond cream, roasted eggplant, which gives a nice bite, while the tomatoes adds a beautiful sweetness and acidity to the dish.

How does this dish embody sustainability?
We utilise most of the ingredients in this dish with very little wastage. The pancake base is made from trimmings from the Pane di Altamura bread. For the eggplant, we chop it into bits and pack them into a ring-shaped mould instead of trimming the vegetable into a perfect circle. The entire tomato, except the skin, is also used, and vegetable trimmings are used to make the jus.

Why is sustainability important to you?
This interest started out as a cost-saving measure. In fine-dining, we always have the habit of making the most out of every ingredient, so we plan the menu properly and use every part of the ingredients. What has become more important, especially in Singapore, where very little food is produced locally, is understanding the people behind the products. I work with farmers who have the right mentality and intention, from not using chemicals and non-genetically-modified seeds. I like to meet those people as well as getting a close connection with produce.