Juggling two jobs daily can be daunting, but that was what Ryk Chew, the third-generation owner of popular rice dumpling shop Hoo Kee Bak Chang in Amoy Street Food Centre, did for 12½ years. Chew double-hatted as an engineer in a telecommunications company as well as an assistant at his family’s rice dumpling business. His days had a sweaty and greasy start at 4am from preparing the marinated pork, mushrooms and salted egg yolks, and frying heaps of rice with dark soya sauce and five-spice powder, before rushing home at 7am to shower and head to his day job.

The 43-year-old father of two recalls: “Initially, I was not used to it as I had to wake up while most people were in dream land. But once you get accustomed to the tiredness, it becomes an early morning routine.”

After mulling over quitting his job for three years, he decided that “enough was enough” and gave up his $3,000-a-month job to join Hoo Kee Bak Chang full-time in 2010. He says: “The main reason that pushed me into this business was seeing how hard my parents, who were getting old, work every day, so it was time for me to lighten their workload.”

Hoo Kee Bak Chang specialises in Hokkien-style rice dumplings that feature rice fried with five-spice powder and dark soya sauce. (Credit: Kenneth Goh)
Over the past eight years, Chew has seen his family’s 70-year-old business reach several significant milestones, including receiving Bib Gourmand status in the MICHELIN Guide Singapore for the last two years. “Getting the Bib Gourmand has helped to spread our shop’s name to customers around the world who look for recommended eateries in the Guide.”

Business has also been growing steadily. On a regular day, Hoo Kee Bak Chang sells about 400 rice dumplings daily. Production increases by 2½ times during the peak Dragon Boat Festival season. The festival happens on next Monday (June 18) this year.

The shop offers four types of Hokkien-style rice dumplings or bak chang — Original, Salted Egg Yolk, Mushrooms and Deluxe, an all-in-one version that comprises salted egg yolk and mushrooms. Most of the dumplings have been booked in the months leading up to the festival.
Advertisement
Advertisement 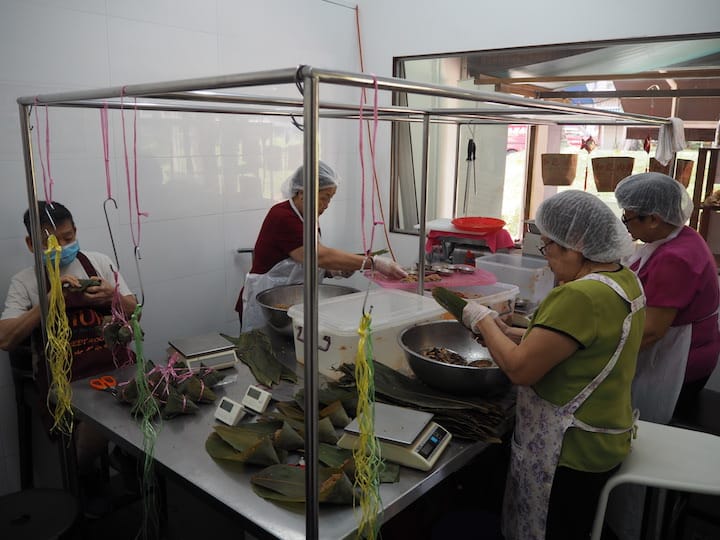 Mr Ryk Chew's parents (on the extreme left) continue to make rice dumplings as manpower is scarce. (Credit: Kenneth Goh)
These days, Chew’s parents, who are in their 70s, still help out in the business. When the MICHELIN Guide Digital visited the shop’s cooking facility in Bukit Merah recently, the elderly couple have been packing parcels of rice and meat that are wrapped in bamboo leaves with two other helpers since 6am.

Each of them deftly filled up cup folded from bamboo leaves with rice and piled them with meat, chestnuts, mushrooms and salted egg yolk before dexterously tying the pyramids with raffia string. A worker later hoisted bundles of rice dumplings into a gigantic pressure cooker.

After making deliveries to their Amoy Street Food Centre stall, the younger Chew returns to help his parents with the remaining dumplings for the day. Tying up the parcels of rice dumpling seamlessly, his hands have been honed by years of practice. “I was fascinated by how my uncles, aunties and grandmother make bak chang when I was young,” he recalls fondly. “My dad, who is my shifu (master in Chinese), has high standards and I kept doing it until he was happy with the dumplings.”

““If I didn’t join this business and keep it alive, it might not last. As once my father retires, there will not be anyone doing it. I think that heritage is a very important part of me.”” 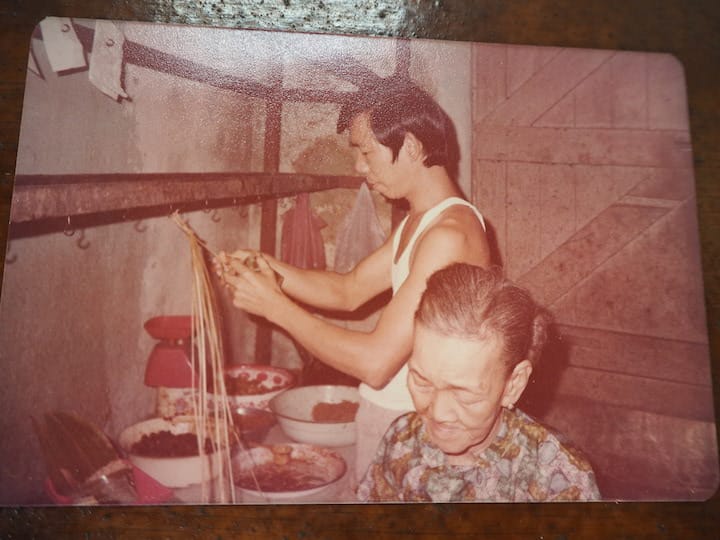 Hoo Kee Bak Chang started in 1948 as a roadside stall in Amoy Street.
Family is the cornerstone of Hoo Kee’s longevity. Ryk’s grandfather, Chew Hai Chwee, who had worked as a clerk, turned to food peddling as it was a more lucrative way of supporting his expanding family.

A man of many culinary skills, he decided to put his rice dumpling-making expertises to good use. In the 1950s and 1960s, the business flourished and he took over the coffeeshop that was behind his makeshift stall along the bustling Amoy Street. In 1984, Hoo Kee relocated to its current location in Amoy Street Food Centre following the government’s ban on street hawkers.

The younger Chew is filled with nostalgia for the convivial buzz that surrounds the roadside stall. He says: “During the peak rice dumpling season, all the children would not go to school and helped out at the shop.” 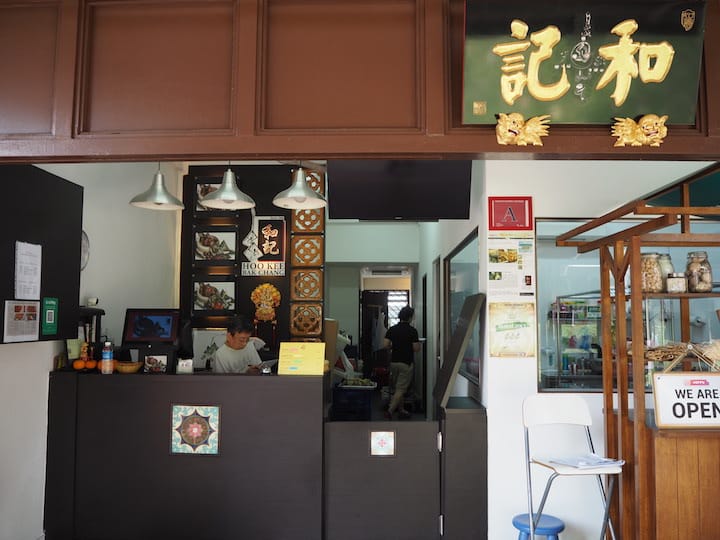 Hoo Kee Bak Chang has been recognised with Bib Gourmand status for the past two years. (Credit: Kenneth Goh)


On what steered him to return to his family business, he notes it holds great sentimental value for him. Turning emotional, he says: “If I didn’t join this business and keep it alive, it might not last. As once my father retires, there will not be anyone doing it. I think that heritage is a very important part of me.”

“If Hoo Kee Bak Chang is still around, it will bring joy to those who have been eating our rice dumplings for a long time. And for generations to come, they can have a taste of what my forefathers have done.”
The MICHELIN Guide Insider Series: Wrapped In Tradition | Hoo Kee Bak Chang
RELATED: 5 Unusual Rice Dumplings That Will Give You A Special Filling
Advertisement
Advertisement