Ukrainian cuisine has largely stayed in a bubble that dates back to the Soviet Union era. With dishes such as thick and velvety borscht soup that is brewed with beetroot and tomatoes, lard-clogged banosh and holubtsi (boiled cabbage rolls), it has gained a reputation for being heavy, and high in fat.

Speaking to The MICHELIN Guide Digital at a recent cooking showcase in Singapore, Kovryzhenko shares: “There have been new waves in French, Nordic and Spanish cuisine, but in Ukraine, people have been eating very much the same type of food that they grew up with. Culinary schools in Ukraine are mostly old-school, so we must give young chefs an interesting future to look forward to.”
Kovryzhenko is tapping on his unique background as a former sculptor and miniaturist to usher in a fresh wave of change in the Ukrainian culinary scene. Equipped with a background in French cuisine — he studied at renowned culinary schools Le Cordon Bleu and Ferrandi, both in Paris, and has a special interest in fleur cuisine, which centre around the use of edible flowers to add colours and flavours to dishes.

“I use flowers in my dishes as if they are regular ingredients, instead of just garnishes,” he says. “Designing a dish with flowers is like painting — you can experiment and play around with colours and flavours.” 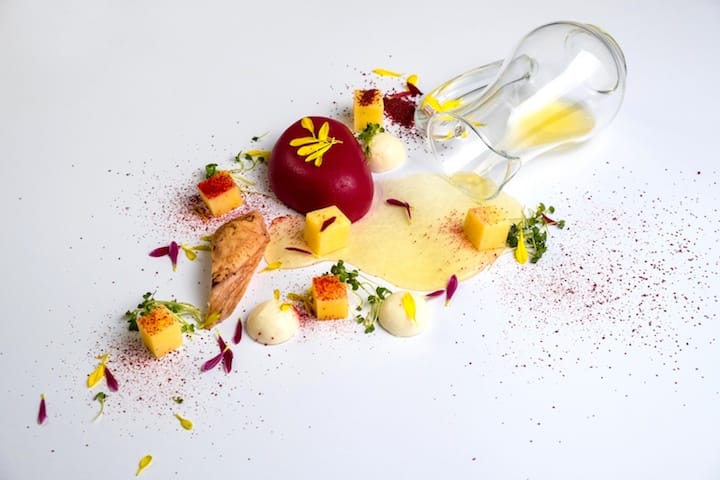 An innovative de-constructed version of Borscht, which is one of the quintessential Ukrainian dishes.
Advertisement
Advertisement

1. What are some of your favourite modern Ukrainian dishes ?

Boiled beetroot is classically served with bryndza (a salted sheep milk’s cheese from the Carpathian mountains in Ukraine), honey and horseradish. I have re-imagined this dish as a “beetroot” that is stuffed with mozzarella cheese. The exterior is made with dark pink beetroot juice jelly, which sits on a bed of horseradish puree that injects spiciness to the dish.

For chicken liver pate, I have added black truffles, which are grown in Vinnytsia in west-central Ukraine — given the recent surge in increase in using homegrown ingredients. Ukrainians typically have warm pate but I like to serve it chilled, which gives it a smooth and buttery texture.

2. How are you modernising Ukrainian cuisine?

That said, I still work with elements of Ukrainian cuisine, such as root vegetables and dairy products like sour cream, which is a big part of our culinary culture. Ukrainian dishes do not have intense flavours as seasonings mainly revolve around coriander seeds, black pepper, horseradish, thyme and mustard. 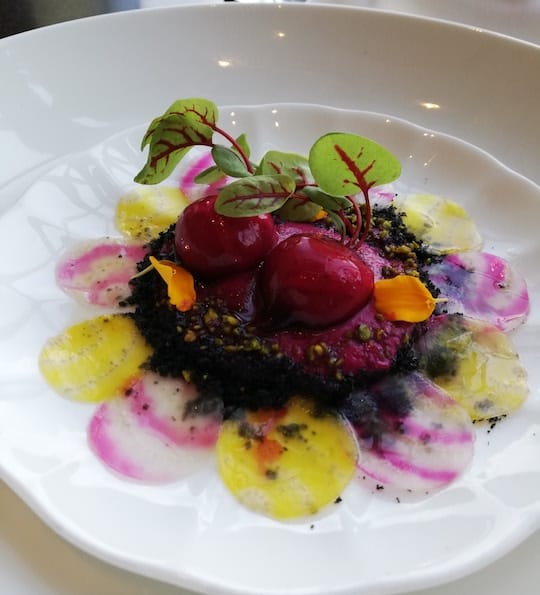 3. Where do you seek inspiration for your cuisine from?

It is through travelling that I look out for new inspirations and expose myself to new flavours combination and ingredients. In Singapore, I have broadened my food horizons by dining at MICHELIN-starred restaurants such as Odette and JAAN By Kirk Westaway. Recently, I was so intrigued by laksa that I have brought back packs of the spice paste and coconut milk to make sauces to accompany meat and potato dishes in Ukraine.

4. How did your interest in cooking start?

Then, I was in university and worked part-time in a restaurant for my allowance. I started out as service staff, but I found my calling in the kitchen. I fell in love with cooking as it was a chance to showcase my artistic skills, through plating and working with the colours of ingredients. 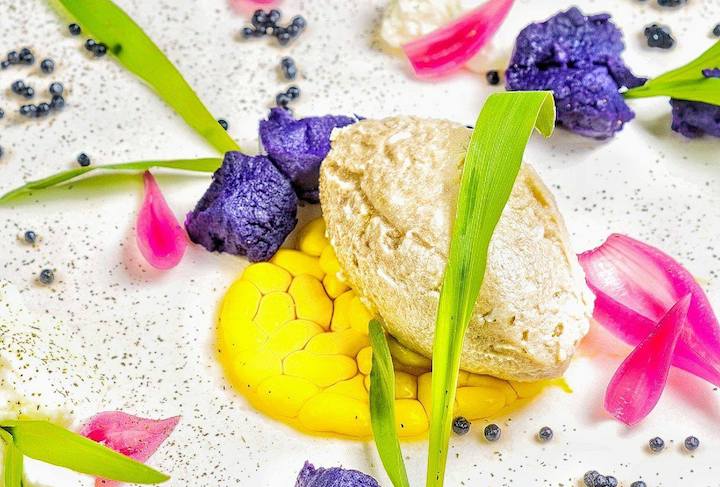 Herring pate jazzed up with a splash of colours from edible flowers.

5. Share with us more about your interest in fleur cuisine.

Flowers are more than mere garnishes on the plate as there is so much to explore about their world of flavours and textures. Flowers are actually very versatile in dishes. Marigolds has a tinge of spiciness, which can be easily incorporated into meat-based main courses, while violets inject a tender texture and perfume dishes, especially desserts well. I usually use nasturtium in appetisers and salads.

Besides flowers, I also enjoy working with vegetables, especially beetroot. I like the root vegetable's sweet taste, and how this flavour can be tweaked by adding salt, vinegar and other spices.