Behind The Bib: Kok Sen

Zi char institution Kok Sen stood resolute on Keong Saik Road even as the area around it has morphed through the ages. Its key? Good food. We find out more.

Behind The Bib Singapore

Sitting alongside these joints though are mom-and-pop businesses and established food names whose reputations have survived the evolution of Keong Saik Road. Kok Sen, is one of them. The eatery has been serving up old-school Cantonese tze char for three generations.

The space itself is a throwback to the 1980s. Colourful strips of paper naming the dishes on offer adorn the white-tiled walls, and no-frills plastic stools dot the fluorescent-lit dining floor. The restaurant is full on most days, and snaking queues form around mealtimes. 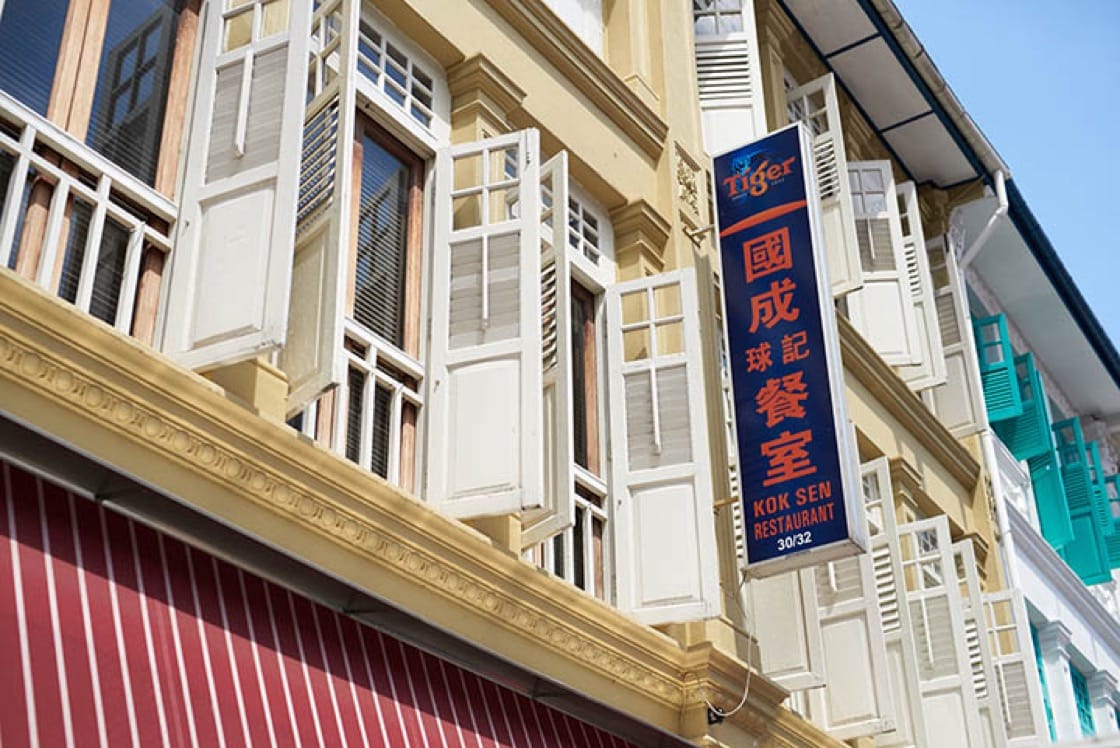 Kok Sen Restaurant's signboard on a shophouse
COOKING UP A STORM FOR HALF A CENTURY
While “Kau Kee” – which the eating house is sometimes known by – is taken from the name of the restaurant founder, “Kok Sen” is the name of the founder’s son. Currently helmed by Chris Wong of the third generation, the restaurant is located a few doors away from its previous address.

The origins of the restaurant is humble enough. “During my grandfather’s time, Kau Kee merely operated as a stall within a coffee shop, selling pork rib and shrimp hor fun by the bowl. My father helped out at the stall from young, and picked up his culinary skills from there,” explains Wong.

In the 1980s Wong’s father inherited the stall and built a fledging business out of it. As lifestyles changed along with improving living standards, people began eating out as a family more often. The enterprising elder Mr Wong grasped this opportunity and began selling family-sized tze char dishes. He also rolled out what will become Kok Sen’s signature dish – the giant prawn hor fun – and developed a strong legion of loyal customers from there.

In 2000, the stall moved to its current premises and expanded into a full-fledged family restaurant. Given his parents’ advancing age, Wong – who was working as an engineer in the semiconductor industry – set his mind on taking over the business, thereby becoming the third-generation owner of Kok Sen. 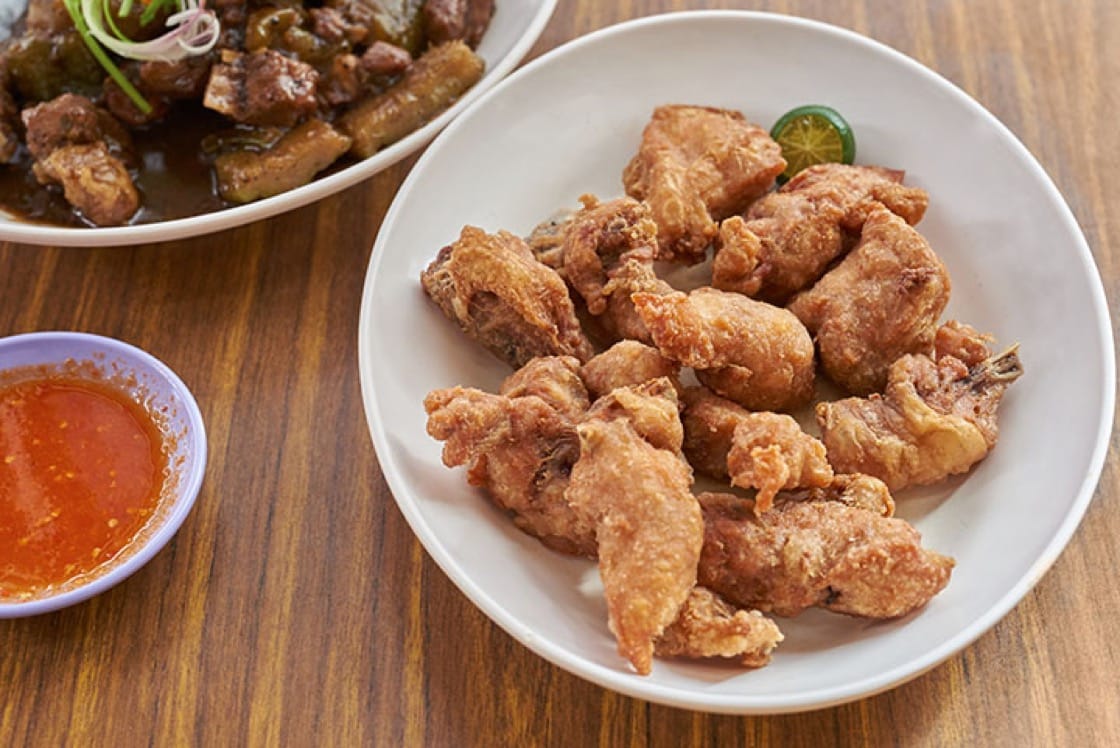 STANDING THE TEST OF TIME
To the 37-year-old, Kok Sen is at the heart a family business. The kitchen was jointly helmed by Wong’s father and uncle until his father’s retirement, and continues to be run by his uncle today, who tirelessly replicates heirloom recipes handed down from the last two generations.

Few things are more irresistible than the heady wok aroma emanating from a piping-hot dish of their expertly cooked stir-fries. When at Kok Sen, a must-order is the big prawn hor fun, a dish that can only be found at this restaurant in Singapore. Fresh big prawns are first flash fried in hot oil to release their vivid crustaceous flavours, before being tossed into flat rice noodles that have been masterfully stir-fried to be infused with robust wok hei. The hor fun is enrobed in a signature gravy, and then served with a side of homemade sambal chilli. This dish is also offered in a different rendition – as a beehoon soup – which should not be missed either.

Another favourite at Kok Sen is the claypot yong tau foo. Unlike most other yong tau foo, Kok Sen’s version uses a trinity of squid, prawn and fish in its stuffing – a combination that imparts a firmness in bite. This creates a welcome contrast to the tenderness of the beancurd and vegetables items. Cooked in a rich brown sauce, the dish appears similar in presentation to the famed Ampang yong tau foo, but is truly a Kok Sen original. 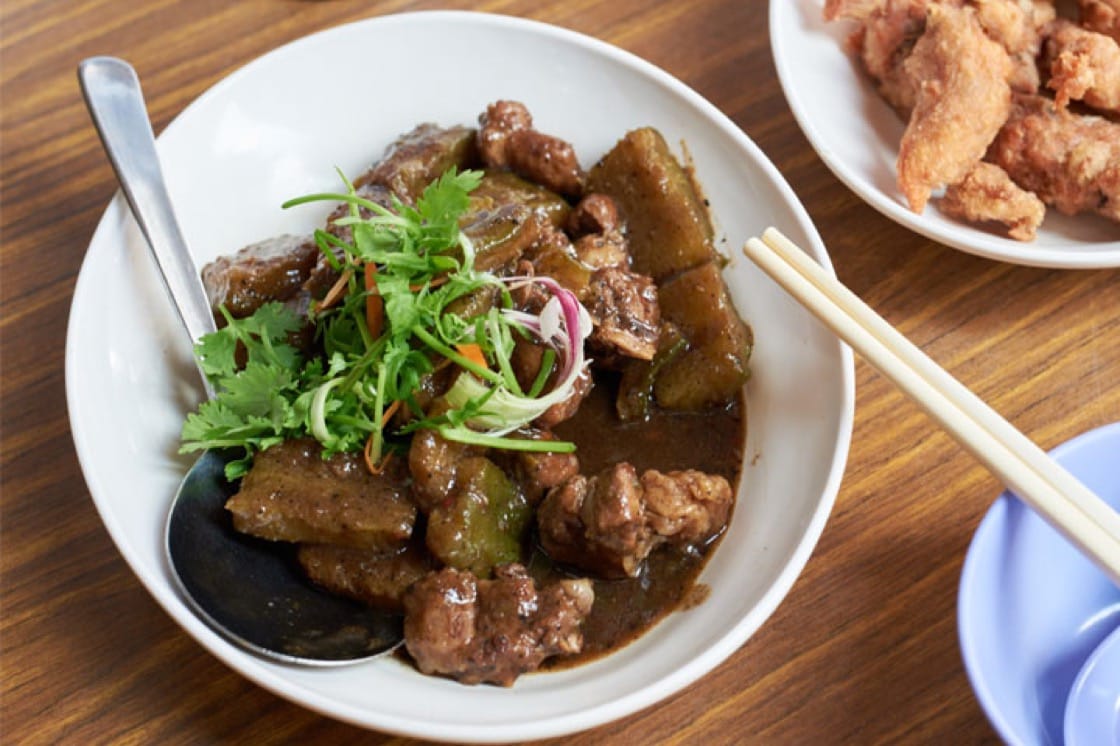 The ever-popular har cheong gai, or prawn paste chicken, is also given a twist at Kok Sen. Instead of wings, Kok Sen chops up a whole chicken for its dish. Marinated overnight in a secret prawn paste batter blended by the chef and freshly fried to order, the chicken positively bursts with the addictive umami flavours of prawn paste. Kok Sen also serves up an old-school tze-char dish – bittergourd pork ribs. Pieces of bittergourd and pork ribs are cooked to melting tenderness, and doused in the salty goodness of a fermented black bean sauce. Every weekend, Kok Sen also sells a special dish of boneless chicken stuffed with seafood paste that is deep-fried to golden perfection. This dish is only available during weekends, and must be ordered a day ahead for Sundays.