The MICHELIN Guide Singapore digital team goes on a monthly eating trail to bring you noteworthy new dishes from the city’s latest openings and tried and tested restaurants.

Highlights from this month's must-eats: a heavenly elixir of a double-boiled chicken soup, an unforgettable Korean-inflected sashimi dish from an offshoot of a one-Michelin-starred restaurant, tender medallions of octopus kissed with the fiery breath of an Inka charcoal oven and a rustic French-style roast chicken. 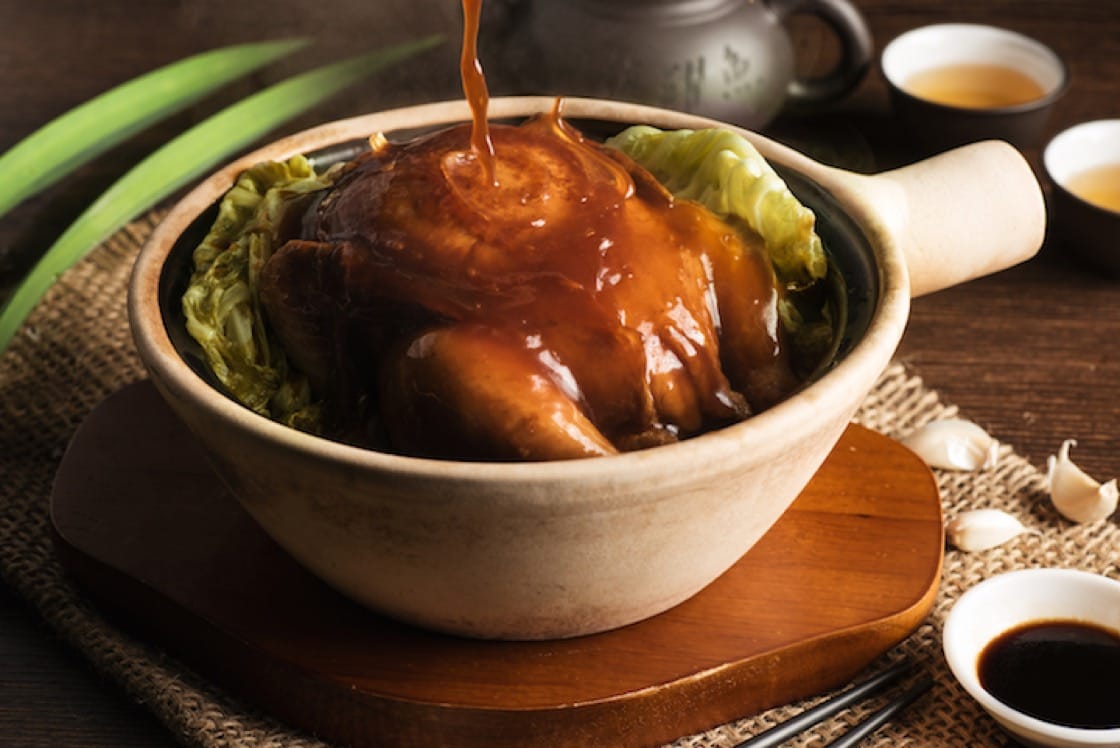 The Kia Hiang Claypot Organic Chicken ($18)
Myo Restobar is a contemporary-looking restaurant in the CBD area serving up traditional Cantonese home-style dishes from its affiliated heritage eatery Kia Hiang at International Plaza. The signature Kia Hiang claypot spring chicken ($18) was created by Kia Hiang's first generation owner, but you might just want to opt for the Kia Hiang claypot organic chicken that's healthier and more flavourful. The whole chicken, tender and fall-off-the-bone, is wrapped in sweet braised cabbage and smothered in a luscious herbal sauce that cries out for a bowl of white rice.
138 Robinson Road, #19-01 Oxley Tower Lobby 1 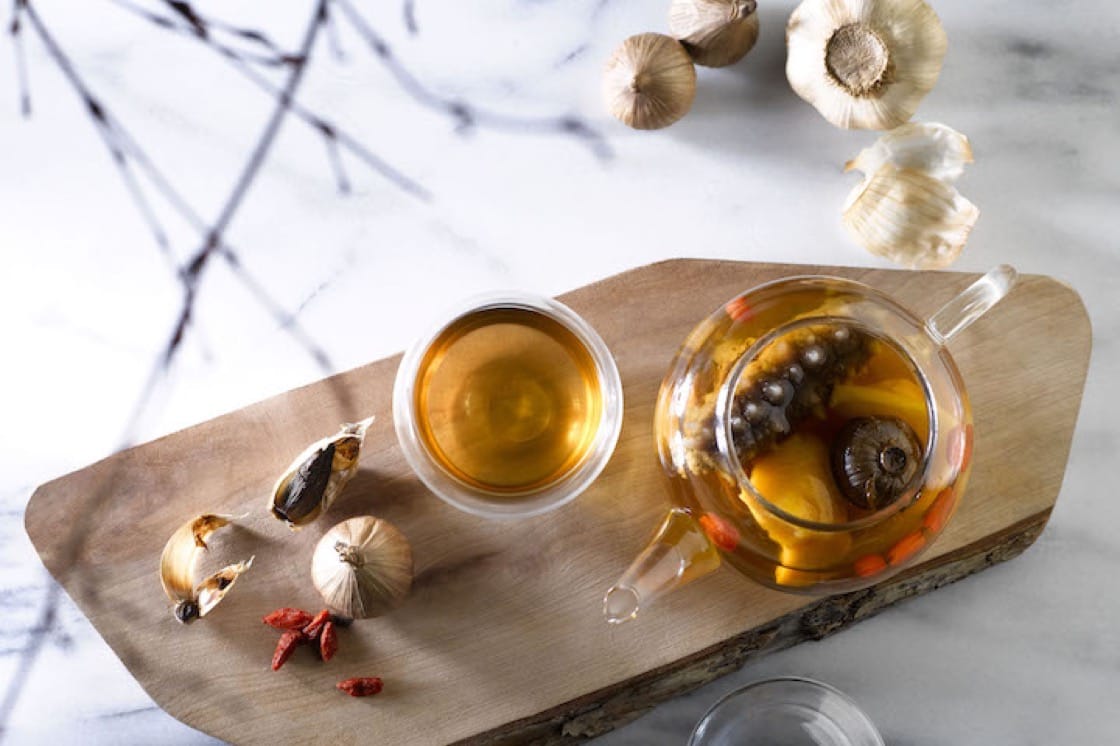 Double-boiled Chicken Soup ($35 per person)
The newly revitalized Hua Ting Restaurant at Orchard Hotel Singapore is stunningly appointed and the facelift is not just skin-deep. Masterchef Chung Lap Fai has introduced intriguing new dishes and creative tea-and-food pairing menus alongside the restaurant's signatures and crowd-pleasers, all plated and presented in sleek, contemporary fashion. Take the double-boiled chicken soup with sea whelk, spike sea cucumber and organic black garlic, for example. Served in a glass tea set, the presentation shows off the clear soup in all its golden glory; Poured out into delicate double-walled glasses, the soup tastes rich and complex, a distillation of all the delicacies that have gone into preparing it.
442 Orchard Road, Orchard Hotel Singapore 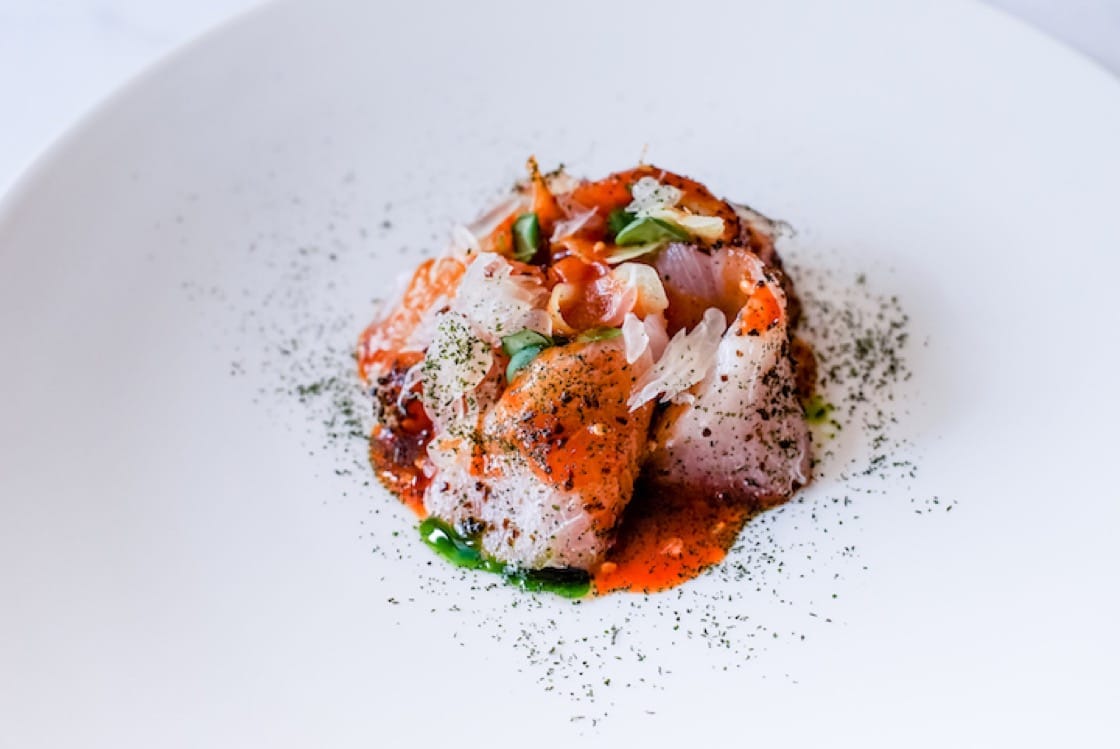 Kampachi Sashimi, Ginger, Gochujang ($22)
Kimme is the second restaurant by rising star Korean chef Sun Kim, who led the team at Meta to a Michelin star in 2017. An extension of Meta’s refined Asian-inspired cuisine, Kimme pairs innovative and elevated modern Japanese- and Korean-influenced dishes with more casual surroundings. The à-la-carte-only menu at Kimme is divided simply into small plates, big plates and sweets—and the small plates at Kimme shine. For a taste of how the chef integrates Korean cooking influences in his modern European plates, try the starter of kampachi sashimi with ginger and pomelo dressed with spicy gochujang and chive oil. Each bite has great texture from the greens and juicy pomelo, while the ginger lends a warmth to the familiar Korean gochujang dressing.
47 Amoy Street 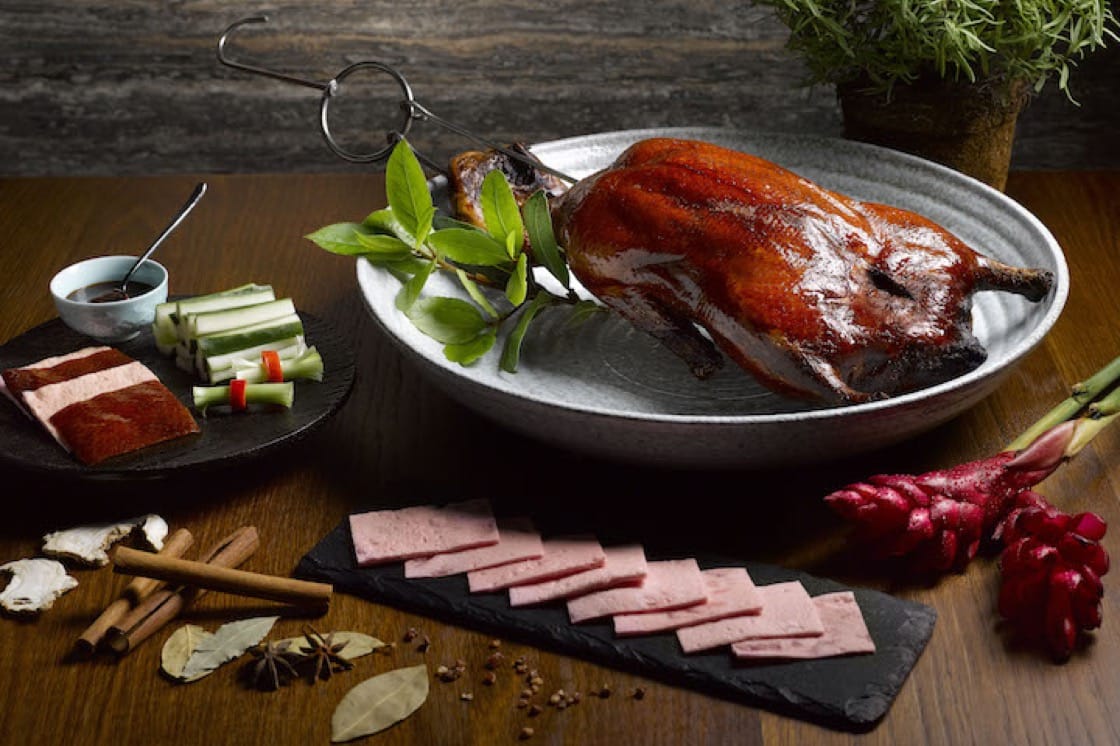 Roasted Ireland Silver Duck in Peking Style ($48 half, $88 whole)
For chef/owner Yong Bing Ngen, this new iteration of Majestic housed in a futuristic glass pavilion suspended off the fourth floor of Marina One, is a culmination of his storied 35-year-long career and everything he wanted to see in his restaurant, from the exclusive modern setting to finally having his own dim sum kitchen. The show-stealing dish here is the roasted Ireland silver duck in Peking style, served with pancake, scallion and cucumber. The skin is as expected, crisp and fragrant with the accompaniments, but it is the meat of the duck that truly stands out. Instead of being chopped up and cooked into a second dish of noodles or fried rice, the duck meat is sliced and served in its jus, cooked through, and melt-in-the-mouth tender and juicy.
5 Straits View, #04-01 Marina One, The Heart 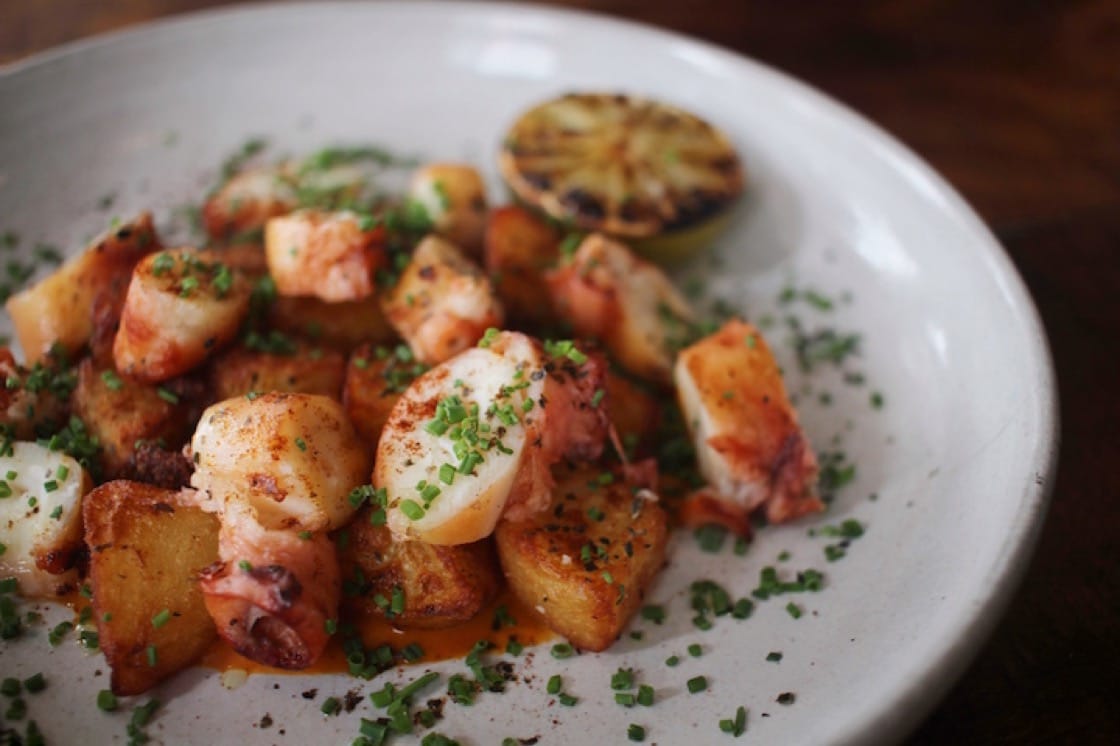 Octopus With Fried Potatoes And Red Pepper Puree ($30)
The workhorse of the kitchen at Mediterranean restaurant Moosehead is its intimidating, fire-spitting Inka charcoal oven. This homely dish on its current menu features fresh sweet octopus from New Zealand endowed with crisp edges and a smoky kiss from the Inka oven, and drizzled with a savoury red pepper sauce featuring a blend of Inka-roasted whole peppers, capers, Semillon vinegar, cumin and coriander. The crisp fried potatoes serve to mop it all up.
110 Telok Ayer Street, 6636 8055 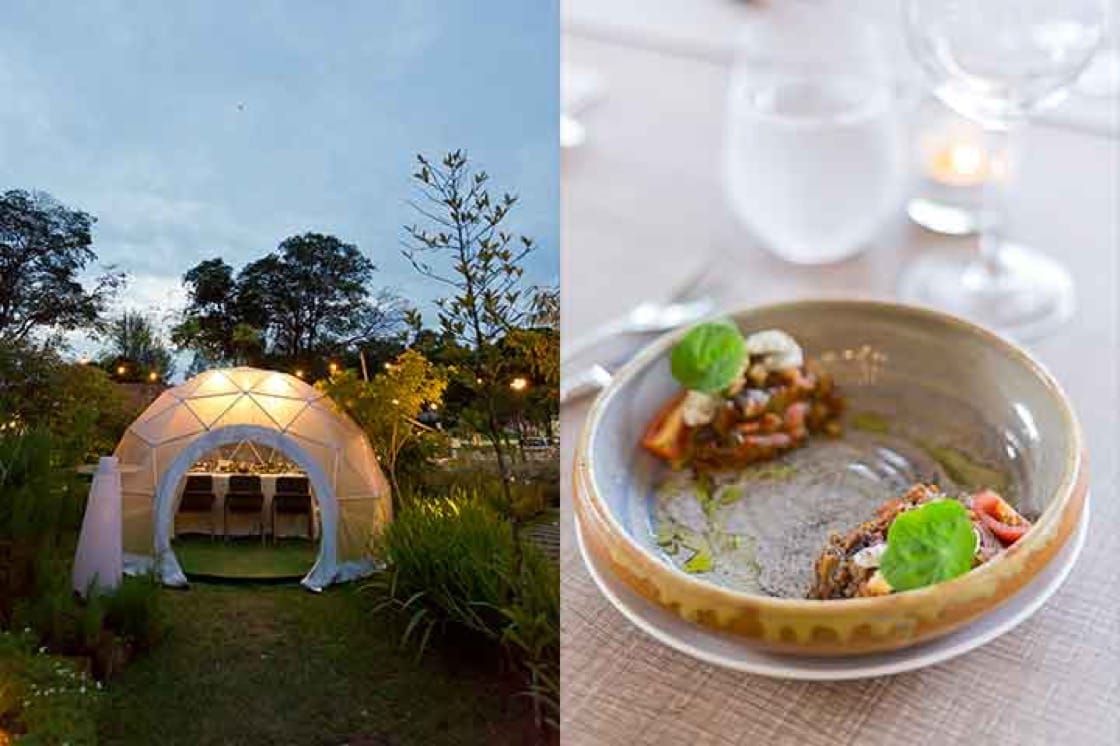 Panzanella ($14) and Grilled Rye Bread ($5, also available as part of the communal dinner set menu)
Just when you thought that the idyllic ambience of this multi-concept destination couldn't get any dreamier, The Summerhouse goes and adds three bubble-like climate-controlled dining domes in their lush edible gardens, making the experience completely magical. True to its farm-to-table credo, the communal dinner menu features produce from a collective of Singaporean and Malaysian farmers—think Inka charcoal-grilled slipper lobster and the silkiest smoked butter poached Red Snapper fillet from a local kelong. While the mains hold their own, the simple but oh-so-good starters of panzanella with crispy and chewy grilled rye bread topped with buttermilk and freshly churned house-made butter make for a great opening act. The Moroccan-style eggplant dish is made from local eggplant that is baked and marinated for two days with a heady mix of herbs, smoked paprika and preserved lemon before being cooked with a reduction of roasted garlic, chilli padi and tomato, perfect with the bread.
3 Park Lane 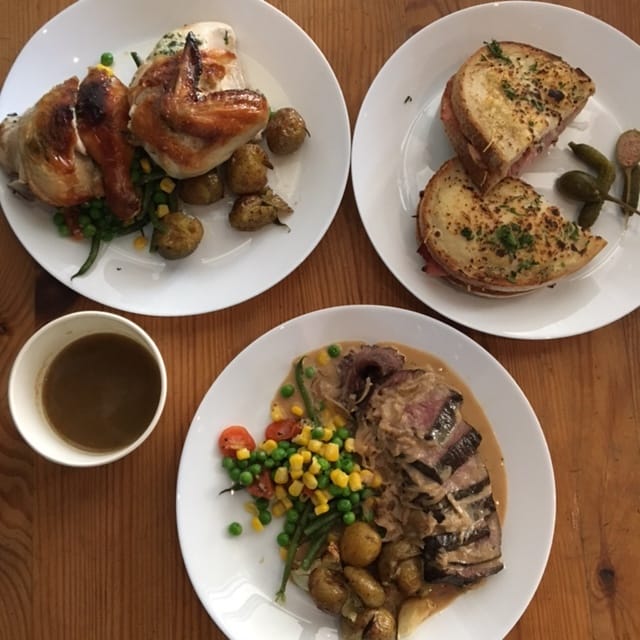 Roast Chicken (from $23 for half a bird) & Croque Monsieur ($17.50)
Sunset Way in Clementi just got more hip with the opening of Summer Hill bistro last month. The 36-seat space is helmed by chef Anthony Yeoh, who used to be the group executive chef of Artichoke and the now-defunct Bird Bird, and former head chef of Cocotte in Little India. Diners can either take away the food or eat them in the cosy premises. Fans of Cocotte will be happy to know that the Signature Roast Chicken is back on the menu. The beautifully burnished bird is moist and juicy, and redolent of aromatic herb butter. Accompanied by roast potatoes and mixed greens, the hearty plate evokes Christmas memories. Other rustic dishes include Croque Monsieur, a severely moreish parcel of ham and Swiss cheese sandwiched in between grilled sourdough bread and slathered in creamy Béchamel sauce. Take in the fragrant whiffs of freshly baked goods such as croissants, quiches, banana bread and citrus and rosemary olive oil cakes. Summer Hill also offers a private meal service with ready-to-cook food packages.
Block 106 Clementi Street 12, #01-62