Technique Thursdays: Pasta-Making Tips and The Texture of Pleasure

When one thinks of textures in a fine-dining restaurant, a single deconstructed dish with multiple elements like foams, jellies, sorbets and even powdered ingredients come to mind. After all, there is no shortage of restaurants in Singapore that deploy the latest scientific wizardry to whip up these edible elements.

Not at one-Michelin-starred restaurant Terra. Adjusting textures here means only one thing: pasta. And that’s because Japanese chef Seita Nakahara who heads the kitchen believes that it’s integral in creating balance on a dish for the diner’s experience.

"The pasta texture must match the sauce. For example, if the sauce is full of flavour and heavy, like a ragu, the pasta should be harder," he says. "It is good if a diner comes in for just one pasta dish. If he comes for my omakase menu which has a few pasta dishes, I will make it softer so he won't get tired chewing."

While Seita is not Italian, a major part of his career was spent learning the craft from Italian chefs “and the chefs' grandmothers.” In fact, he first worked his way through Tokyo’s top Italian restaurants before moveing to Italy for four years to work in the traditional trattorias of Sicily, Tuscany and Piedmont. 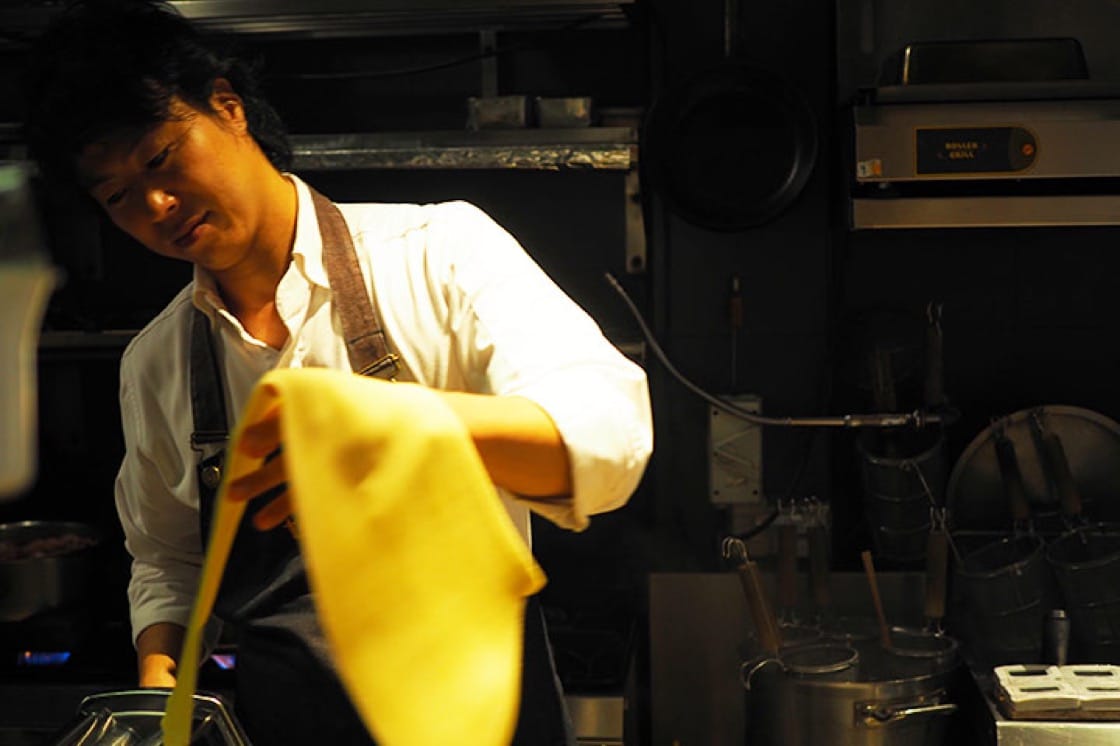 The Texture of Pleasure
In Italy, this varying texture is the result of being home to hundreds of food regions, each with its own specialty. While there are no official figures given the rustic nature of the Italian staple, sources cite that there are at least 350 different types of pasta shapes and textures. Factor in the different regions’ specialty sauces, and thousands of combinations come to the fore.

All this from a simple combination of humble ingredients such as flour, salt and eggs.

But how does this variety happen from so few ingredients? We get Seita to demystify the magic by demonstrating two recipes at different ends of pasta’s textural spectrum. First is the bigoli, a specialty of the region of Veneto that requires so much effort, he had to import specialised equipment. The pasta is as long and round a spaghetti, but larger and harder to chew.

On the softer end of the spectrum is the tajarin, or taglierini as it's more commonly known. The pasta is a Piedmont speciality that’s simple enough for the home cook to make.

(Related: The First Day I Got My Michelin Stars: Massimo Bottura of Osteria Francescana)
Advertisement
Advertisement 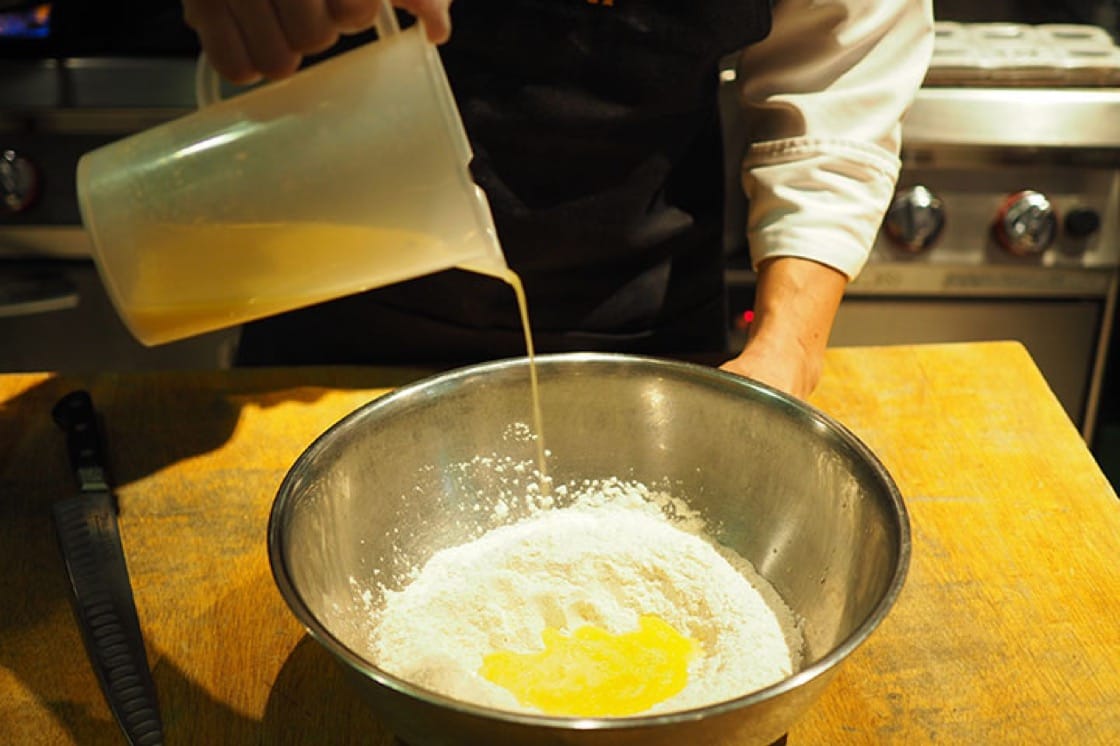 Adding the liquid ingredients into the flour
How To Make Pasta
“The different amounts of each ingredient [is what] affects the texture,” says Seita.

First, the flour: He uses Italian 00 flour, where 00 denotes powder-like lightness in the Italian grading system. He also adds semolina flour – the coarsely ground endosperm of wheat kernels – “to give a harder, more al dente texture to the dough.”

Then, comes the egg. The tajarin uses only egg yolks, which is responsible for the pasta’s fat content and its softer texture. In contrast, the bigoli uses only egg whites, which as most cooks would know, are rich in protein. This is what creates a harder pasta with plenty of bite.
Method to The Madness
The two might vary in chewiness but the method is the same: mix the wet ingredients into the flour until they come together, knead for 10 minutes by hand and then let it rest for 12 hours.

That might seem unusually long as most recipes call for pasta to be rested for just an hour, but chef Seita lives by this method.

“A pasta tastes totally different after 12 hours of rest in the fridge because the time allows the liquid ingredients and the flour to combine completely,” he explains.

Once the dough has rested, it is brought back to room temperature and then pushed through a hand-cranked pasta machine – not electric ones used by most other commercial kitchens.

“It’s easier to feel the texture when I use a manual pasta machine,” he says. 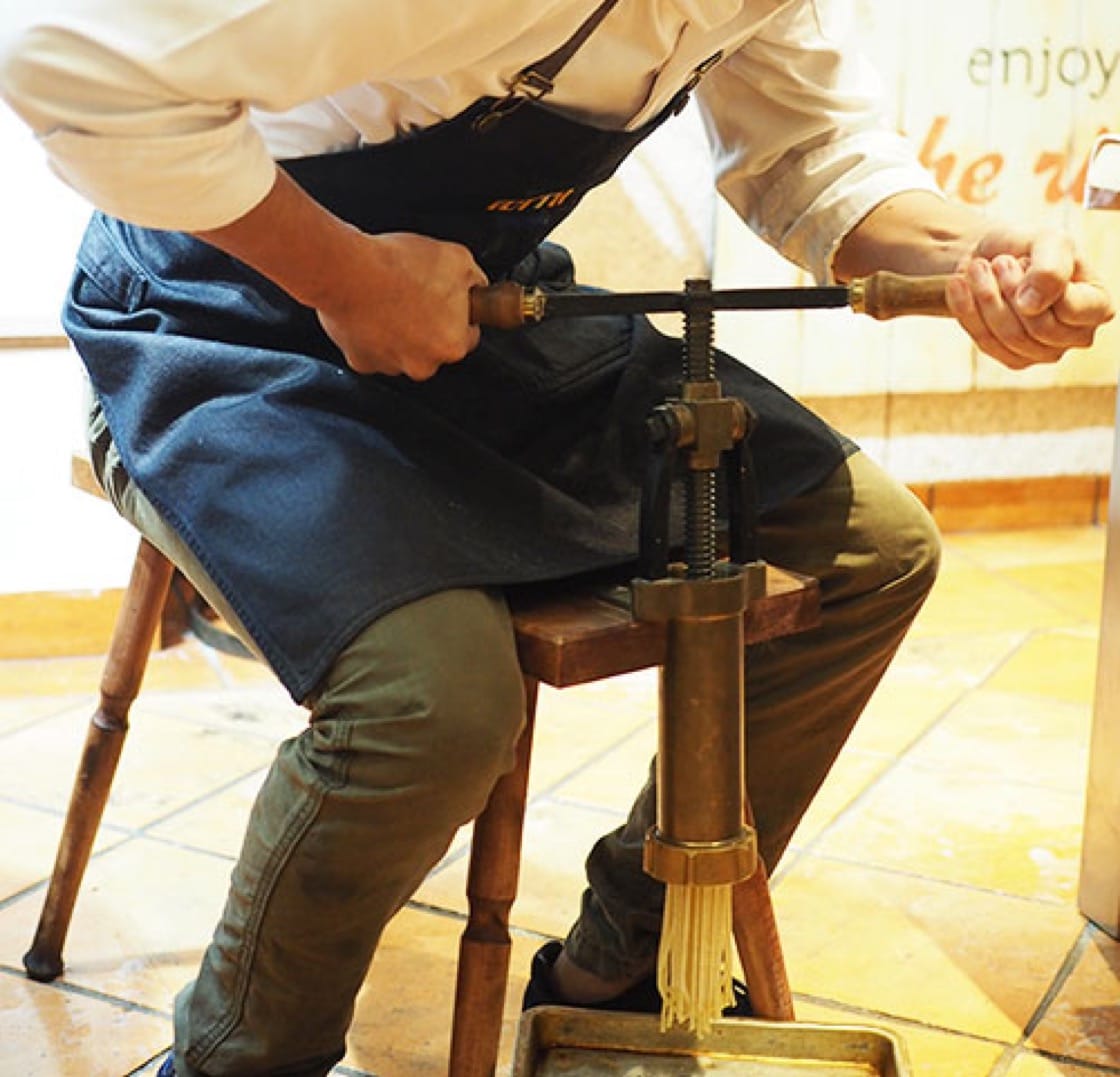 At this juncture, the methods for the two pastas start to diverge. Chef Seita uses a torchio to make the bigoli – the former a contraption so large, he has to sit on it like a rocking horse and turn its handles in continuous circular motions to squeeze out the pasta.

That’s easier said than done as the brute force required leaves him red-faced and sweaty each time. Again, electric versions are available but only a hand-operated torchio gives the texture he’s after: the tiny ridges that allows the pasta to pick up more sauce. 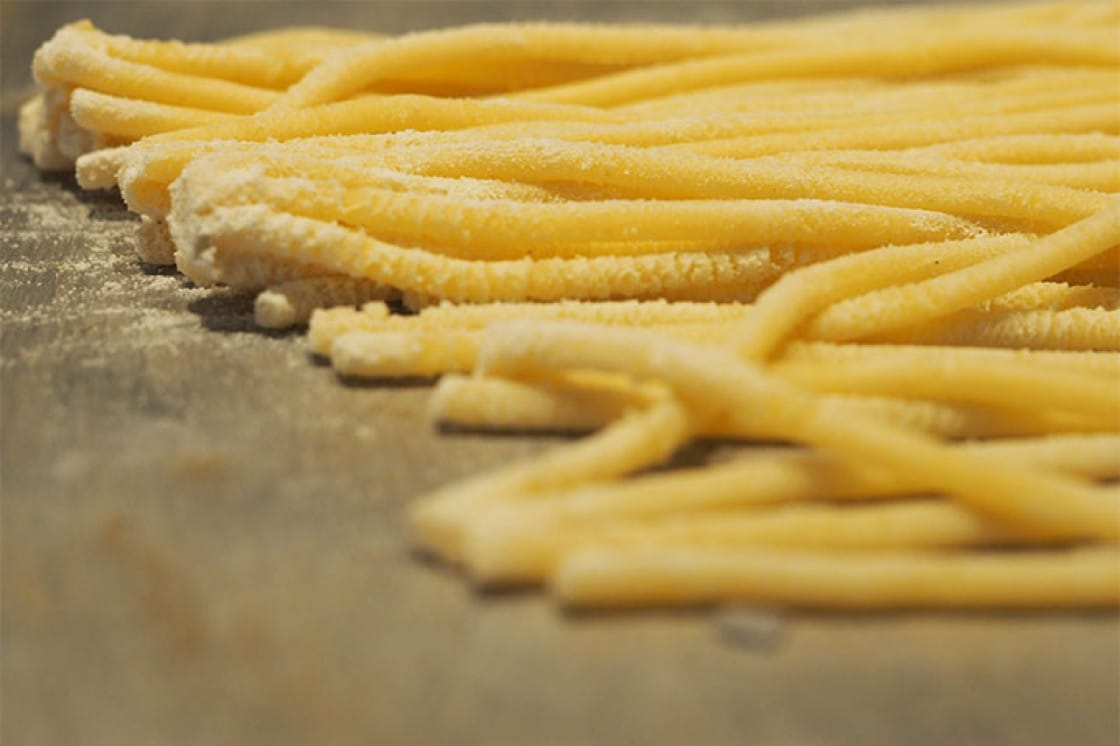 The ridged texture on bigoli that no electric machine can yet replicate
“People in Veneto actually eat this [dish] with no meat,” says Seita. “But because we’re in Singapore, I use Iberico pork which is tender. So it’s all balanced.”

These techniques might not quite involve the latest scientific wizardry but as the chef has shown, the subtle nuances of cooking is still very much dependent on the human touch.

dessert Recipe Thailand
All articles of Dining In