Enjoy Christmas in a cup with this recipe for a warm festive cocktail with a citrus kiss.

Mention Christmas and the cosy spiced aroma of Glühwein, or mulled wine in German, brings back warm memories in the mind of Brotzeit’s group executive chef, Wolfgang Ranner. Though the Austria-born chef has been spending Christmas here for the past few years, his craving for the warm holiday cocktail hasn’t faded.

Ranner says: “Mulled wine warms you inside out during the cold winter nights — nothing beats having a glass of the mulled wine to help you stay warm and toasty while reminding you of joyful times during Christmas.” He adds that the drink is a must-drink whenever he frequents Christmas markets back home.

Traditionally, mulled wine is a concoction of red wine, spices and sugar. The spices are often referred to as mulling spices, which comprises cinnamon, cloves, allspice, nutmeg and star anise. The alcoholic drink is popular throughout Europe, where it is commonly served in punch bowls and ladled into cups.

While red wine is originally used, other types of alcohol used in the Yuletide drink include white wine and sloe gin. In Germany, mulled wines are served with a shot of brandy or schnapps to inject a stronger punch. 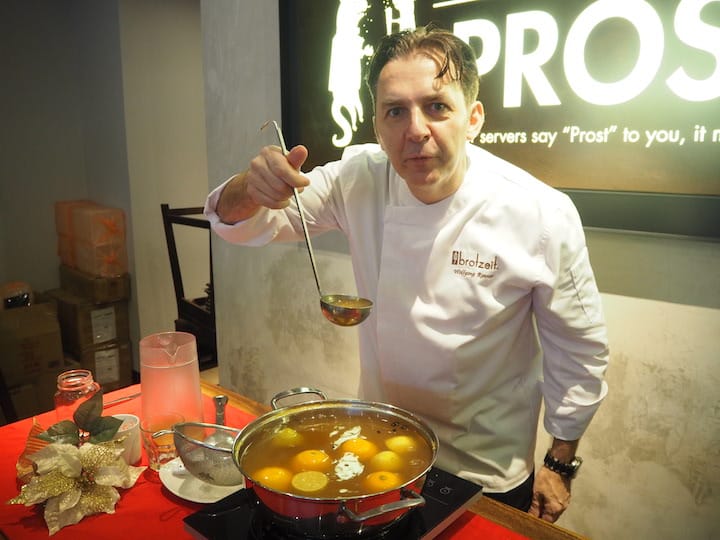 For his rendition of mulled white wine, Ranner has added orange juice into the festive drink. He says: “Some may not be used to the spiced flavours in a German-styled mulled wine, so I have added orange juice to round up the taste and tone down the spices, which makes it smoother to drink.”

Besides mulled wine, Ranner also looks forward to Christmas desserts such as the classic German Bee Sting cake (Bienenstich Kuchen), which is a yeast-raised butter cake that is sandwiched with whipped cream and topped with candied nuts. In Brotzeit’s Christmas menu, he uses orange-cranberry yoghurt cream as a lighter alternative. Other new treats include the Christmas Duo, which comprises a slab of deep-fried turkey schnitzel with ham and raclette cheese stuffing, honey baked ham topped with a whole baked apple and potato gratin, and a turkey salad.

Another of Ranner’s favourite German christmas dessert is baked apple stuffed with raisin and drizzled in a warm vanilla sauce. He says: “In Germany, apples and pears are typically harvested in autumn and can be kept for long before they’re taken out for cooking and consumption during winter. The fruit tastes exceptionally sweet as you are consuming the fruit of your labour during winter.” 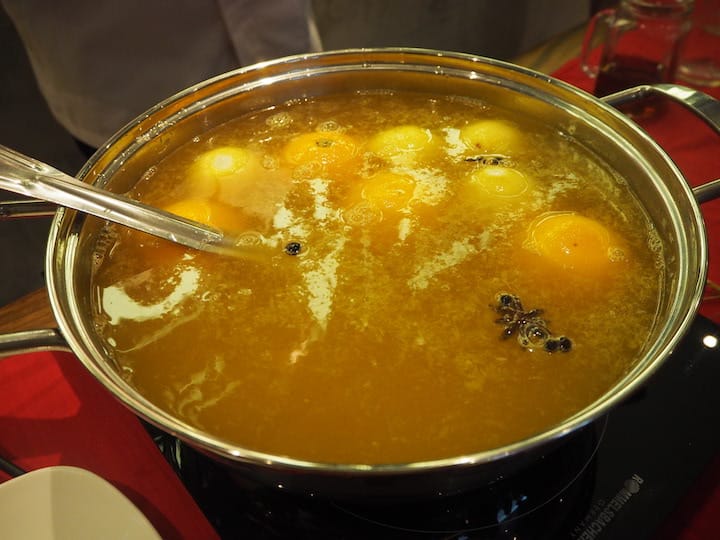 The mulled white wine is a cosy concoction of white wine and spices such as cinnamon and star anise. (Credit: Kenneth Goh)

Method
1. Place lemon and orange slices, cinnamon stick, star anise, juniper berries and whole cloves in a 1-litre cooking pot.
2. Add white wine and orange juice into the pot. Stir well.
3. Add honey or sugar to taste. Stir until the honey or sugar completely dissolves into the mixture.
4. Over low heat, bring the mixture to a simmer for 10 minutes. Be careful not to boil the mixture or else the white wine would evaporate.
5. Turn off the stove and let the mulled wine mixture rest for 20 minutes.
6. Strain the mixture and serve.