They’re slick and slimy, and you’re more likely to have stepped on one after a rainy day than popped one in your mouth at a fancy French restaurant. In France, where escargot is a delicacy, chefs bake the land snails with butter, garlic and herbs like dill and parsley, then pop them back into their shells and serve them a la Bourguignonne in special escargot dishes with indentations for each snail.

Yes, snails are a scrumptious delicacy, once you get past their reputation as garden pests.

Tale Of Snail As Old As Time

Food remains of edible land snails have been frequently found in archaeological sites throughout the Mediterranean region, indicating that snails have been a source of food since prehistoric times.

In particular, the Romans have been known to treat snails as a delicacy, cultivating them in a farming practice called heliciculture. These were a luxury reserved for the rich, the gastropods fattened with corn flour and herbs, then purged in milk for several days till they were so swollen they couldn’t fit back in their shells. The recipes called for them to be roasted and served with various sauces. 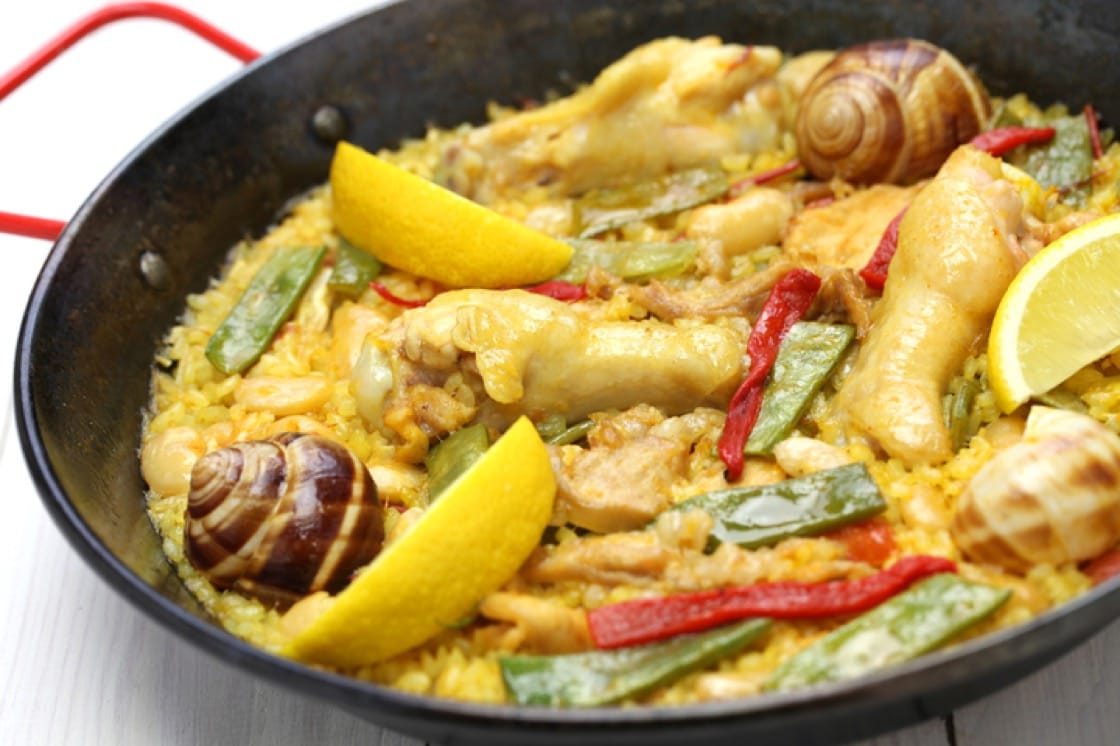 Paella Valenciana is traditionally cooked with what's found in the forest: rabbit and snails (Pic: Shutterstock)
Paellas in Spain were also traditionally cooked outdoors over a wood fire with rice and whatever was on hand around the countryside: tomatoes, onions, rabbit and, of course, snails. In late spring, snails become the star of many a Spanish dish, from arroz de caracoles to a popular tapas dish of snail in spicy broth.

The Edible Varieties Of Snail

“Not all snails are edible and not all of them taste good. Some of them are so small that it simply takes too much effort to prepare them,” says Zacharie Ong, executive sous chef of Fullerton Bay Hotel. In January and February this year, Ong and his team of chefs at La Brasserie created a menu that threw a spotlight on escargot. They incorporated the classic French delicacy into a herbed risotto and comte cheese tart, topped off a creamy mushroom soup with garlic-scented snail, and glazed grilled beef with truffle escargot butter.
Advertisement
Advertisement 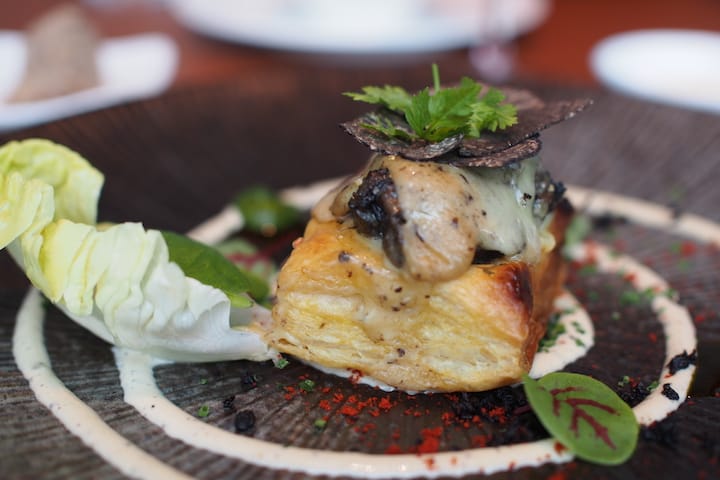 Surprisingly, the common garden snails found all over Singapore are also an edible species. The Achatina fulica or African land snail is one of the largest species of snails in the world and can grow up to the size of a man’s palm. But before you start foraging for them in your neighbourhood park, you should know that snails need to be prepped and cleaned from the inside out for several days before they can be consumed. You should consult a professional if you are in doubt.

How To Prepare Snails For Consumption 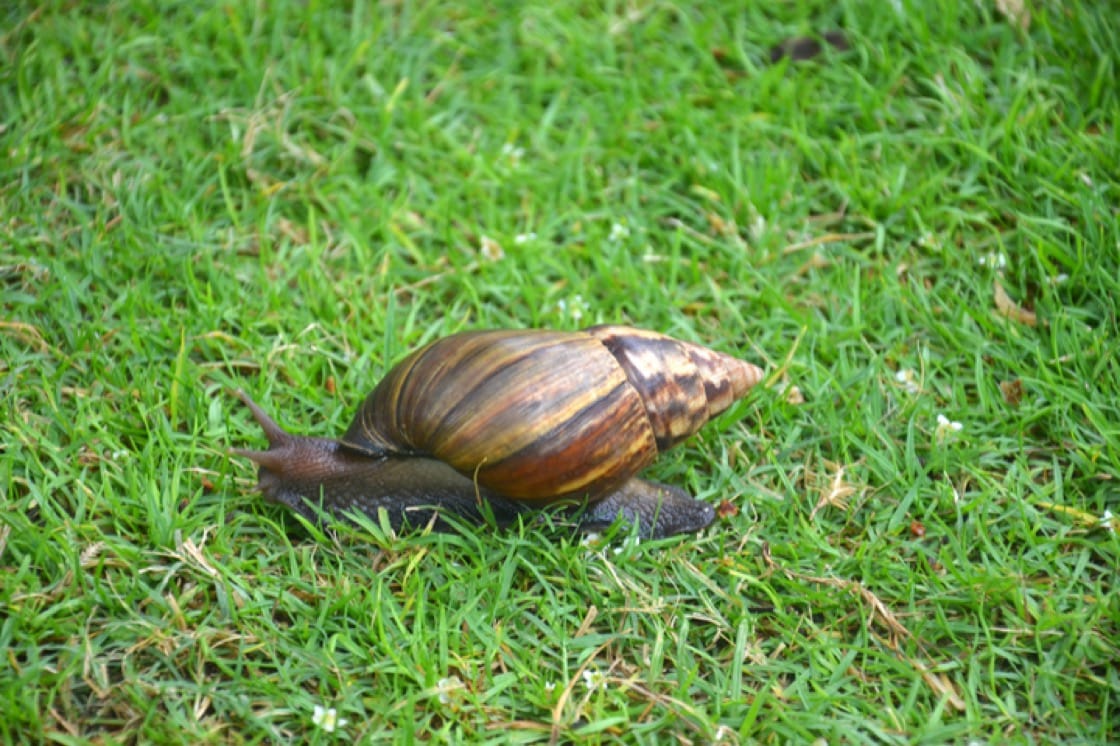 African land snails commonly found in Singapore are an edible species (Pic: Shutterstock)
In The F Word, Gordon Ramsay recommends leaving the snails without any food for the first two days while regularly watering them, then feeding them carrots for a couple of days until their droppings turn orange.

Don’t let the sound of all that work put you off from cooking snails at home though. Processed escargots are easily available canned or frozen. “While they have been gutted, it is still important to check, clean and trim each and every individual snail,” advises Ong. “The key to cooking is timing. If you overcook escargots, they become tough and dry.” 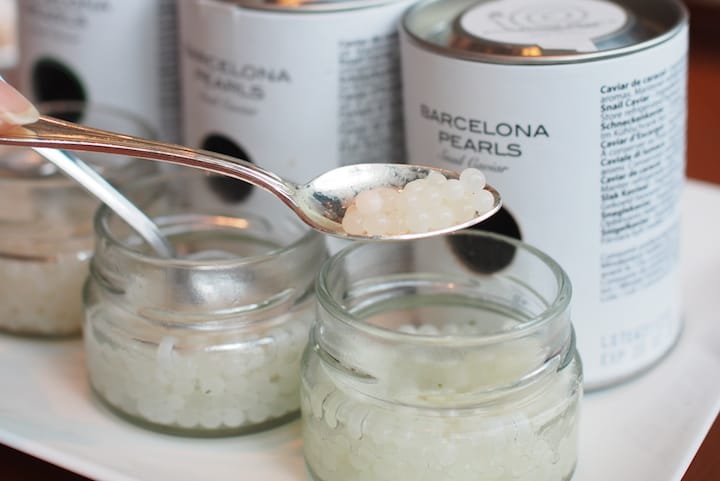 The Caviar Of The Land

Another snail product that featured in La Brasserie’s Les Escargots menu was snail caviar, also known as escargot caviar or escargot pearls. Like sturgeon caviar, these snails' eggs are considered a luxury, and a more exotic one at that. “Escargot caviar is a lot rarer and very exclusive,” says Ong. “It is not something you will see on the supermarket shelves any time soon.”

He describes snail caviar as being larger than fish caviar, which gives it more texture and mouthfeel. “Flavour-wise, it is earthy and woody, with hints of mushroom and asparagus.”

Snail caviar may be cheaper than the finest beluga caviar, which can cost upwards of SGD$6,000 a kilogram, but at about SGD$2,700 per kilogram, snail caviar costs more than three times the price of farmed black caviar. This makes it a risky ingredient for chefs to experiment with. “But our guests appreciate the effort we made to source rare and exciting products. Most of them were very curious about escargot caviar and they were game to try it,” says Ong.