Heng Hwa, the term for the people of Putian in China's Fujian province, are known for their generous use of seafood and fresh indigenous produce in their cuisine, which features clean and comforting flavours.

Mee sua, in particular, holds a special place in Putian’s culinary traditions. Translated loosely as “long noodles”, mee sua is made by rubbing, stretching and pulling a lightly-salted wheat flour dough to impressive lengths. The long and thread-thin noodles symbolise longevity and is traditionally eaten during important festivities like birthdays and on the first day of the Lunar New Year. 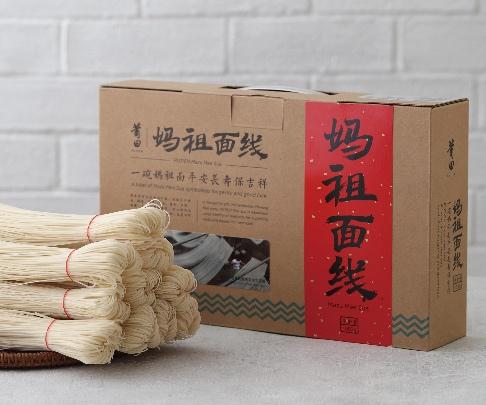 At Putien, a Singapore-headquartered regional Heng Hwa restaurant chain that includes one-MICHELIN-star restaurant Putien on Kitchener Road in Singapore, and outlets in Malaysia, Hong Kong, Taiwan and mainland China, one of the signature dishes on its menu is Mazu Mee Sua. The dish is named after the sea goddess Mazu whose birthplace is said to be the Meizhou Island in Putian. The noodles are first blanched and then stir-fried quickly in a rich gravy sweetened with dried seafood like clams and scallops. Fresh prawns, snow peas and shredded omelette lend colour to the dish, which is garnished the typical Heng Hwa way — with a smattering of peanuts and crispy seaweed.

You can purchase dried Heng Hwa bee hoon and mee sua in traditional Chinese dried good provision stores, or at Putien restaurants. These dried noodles are shelf-stable and a versatile pantry staple to have, lending themselves to all manner of easy homemade dishes like stir-fries or in soups.

Method:
1. Blanch the mee sua in a pot of boiling water, drain and set aside.
2. Pour oil into a heated wok and crack the egg into the wok to make an omelette. When golden brown and cooked, shred the omelette and set aside with the blanched mee sua.
3. Heat the wok again and add some cooking oil. Saute the pork belly and red onions first, then throw in the scallops, clams, prawns, tofu puff, snow peas and mushrooms. Add in the superior stock and let it simmer till all the ingredients are cooked.
4. Add in the mee sua and shredded omelette and cook for another 30 seconds.
5. Add the Chinese celery stalks, a dash of shallot oil and rice wine. Optionally, garnish with spring onions, peanuts and crispy seaweed to serve.

Recipe New York City dessert
All articles of Dining In