Gejang, also called gejeot in some regions, is a variety of jeotgal. Jeotgal–typically served with rice as a side dish or used as a condiment to flavor all kinds of food–is made by salting and fermenting pretty much any type of fish or seafood common to Korea. The word ‘gejang’ is made up of two words; ‘ge’ means crab while ‘jang’ means sauce or condiment.

Traditionally, gejang is made by marinating fresh—preferably live—crabs raw in soy sauce, but a spicy version marinated in a chili powder-based sauce has also become popular in modern times. The former is called ganjang(soy sauce) gejang while the latter is called yangnyeom(seasoned) gejang. 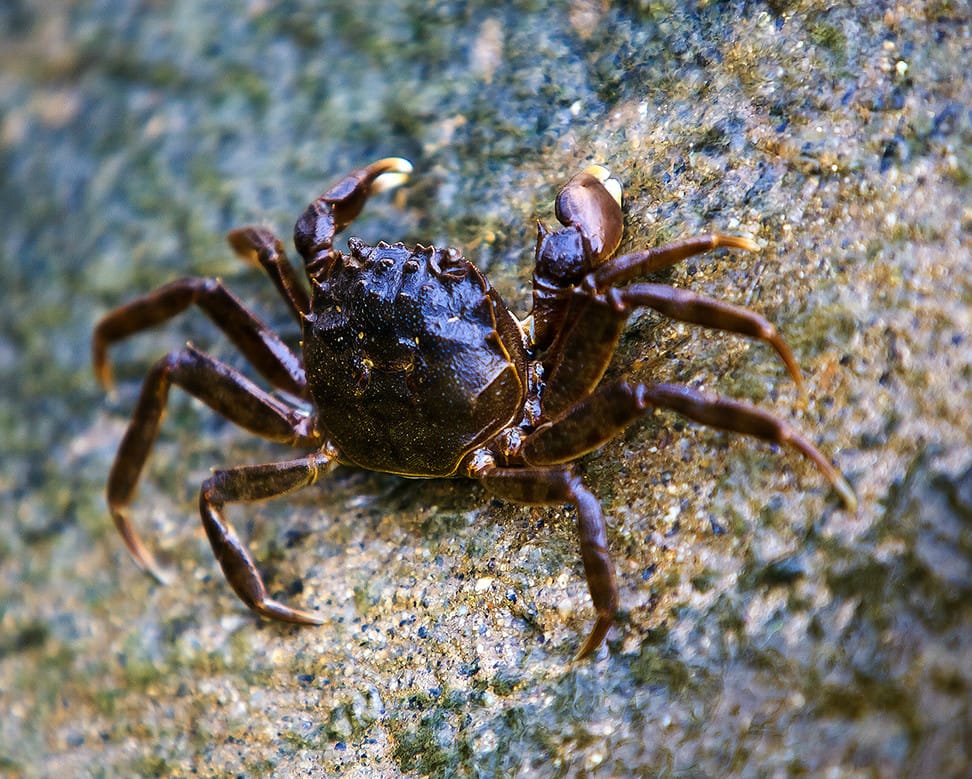 The Basics of Gejang Preparation

Well-cleaned live female crabs are stacked in layers–carapace facing down–in a crock, into which the boiled and cooled soy sauce is poured until the crustaceans are completely submerged. After some time, the soy sauce is removed from the crabs and boiled and cooled, then poured into the crock over the crabs once again. This process is repeated three or four times over the course of two weeks.

Not Just Any Crab

In the old days, Gejang was typically made with chamge (Chinese mitten crab) which were commonly found in rivers, streams, coastal estuaries and rice paddies. Chamge caught in the lower Imjin River in the fall was especially prized for its superb flavor, laden with roe and tomalley (also called crab mustard or crab fat). Although not as meaty as the saltwater horse crab, chamge was valued for its distinctive fragrance.

Traditional gejang made with Chinese mitten crab is typically saltier than saltwater crab gejang. Due to their hard shell, the fermentation process can take a few months. Hence, the prepared soy sauce for chamgejang contains a high level of sodium to extend the preservation period.

As the population of chamge dwindled over time due to rivers and streams becoming increasingly polluted, Koreans started turning to saltwater crabs such as the Asian paddle crab (dolge/돌게) and the horse crab (kkotge/꽃게) for gejang. Unlike chamgejang, which boasts a full depth of flavor that comes from long-term fermentation, the beauty of kkotgejang rests in its freshness and is eaten within a week. The delicate flesh of kkotge, which is larger and meatier, has a sublimely sweet and savory flavor enhanced by the mild soy sauce. The flesh also has a satisfying density that feels rich and velvety on the tongue. 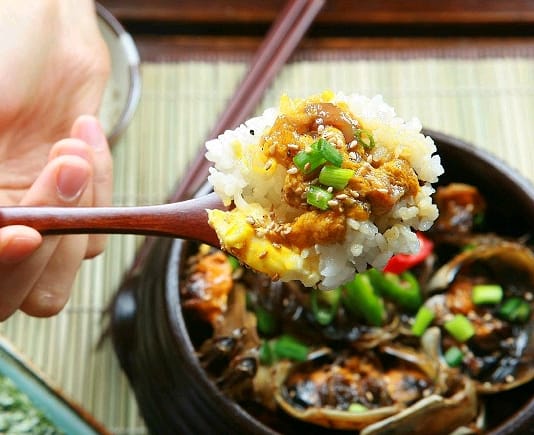 Books from the Joseon Dynasty (1392 – 1910) such as Sallim Gyeongje (“Farm Management”), Gyuhap Chongseo (“Women’s Encyclopedia”), Jubangmun (“Book of Making Alcoholic Beverage”) and Siui Jeonseo (“Complete Collection of Corrections and Discussions”) show that Koreans were eating gejang as far back as the 17th century. According to Sallim Gyeongje, written around the end of the 17th century, gejang was prepared by preserving chamge in salt, clear rice wine and liquor dregs. This method allowed crabs to be preserved for a longer period of time. Records also show that salt water, vinegar and soy sauce were common ingredients used to preserve raw crab.

According to Gyuhap Chongseo (“Women’s Encyclopedia”), an important step of gejang preparation involved placing live crabs in an earthenware crock containing small pieces of raw beef. Gejang made with live crab fed with beef right before marinating tastes sweeter, according to the book. Chinese mitten crab Gejang was considered such a delicacy that it was served as banchan for kings for many centuries.

Gejang is referred to as “rice thief” as the saltiness of the marinated crabs so arouses the appetite that one does not realize how much rice they are eating. There are several ways to eat gejang: some like to suck the soft flesh straight out of the shell, some prefer to squeeze the crab meat and roe onto their rice and many enjoy adding a couple of spoonfuls of rice directly into the carapace and mixing it with the crab meat and the roe. 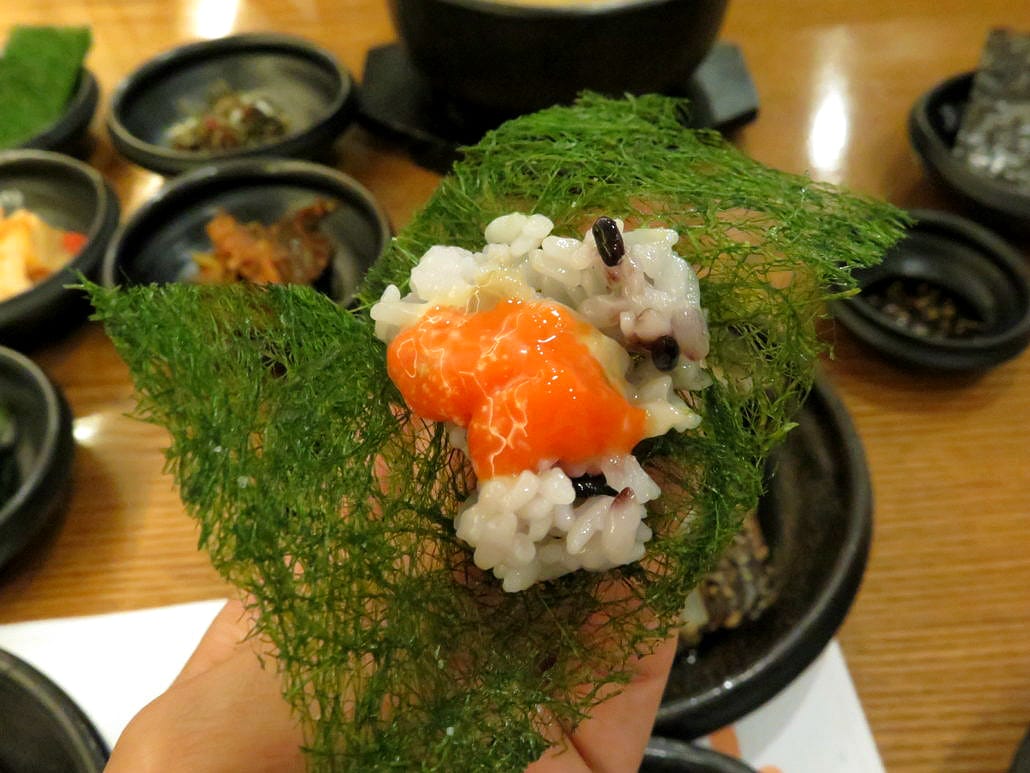 Kkotge or horse crabs have two seasons in a year– one in the spring season (April through June) when female crabs are full of roe and their flesh is firm and sweet and another in the fall (September and October) when male crabs fatten up. Female crabs are generally favored over male crabs for their bright orange roe which has a buttery and sweet flavor chock-full of umami. They are found in abundance on the west coast of Korea. 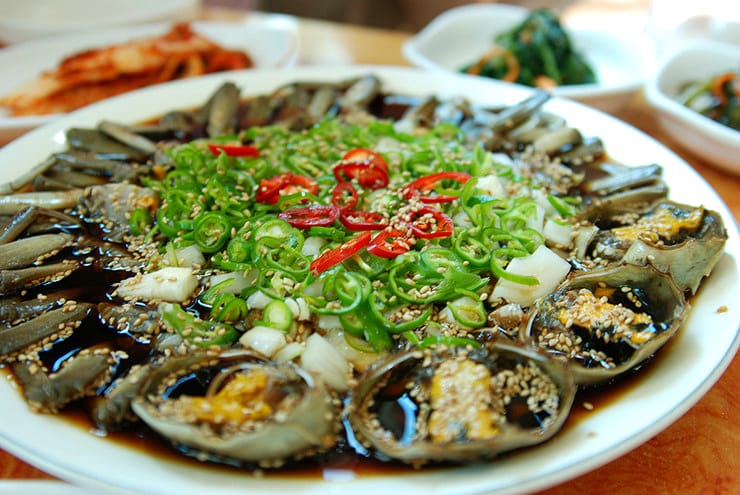 Chamgejang – Gejang made with Chinese mitten crabs are preserved for at least a month in b soy sauce. As the marinade is quite salty, gejang can be preserved for months.

Beoltteok gejang – Gejang made with freshwater Charybdis crabs. The crabs are cut into pieces, marinated in soy sauce and eaten within a day or two while the flesh is fresh and sweet. The name beoltteok means “quickly” or “immediately” in Korean.

Kkotgejang – Horse crab, the most commonly consumed crab in South Korea and local specialty of Jeollado Province, is marinated in a mild soy sauce that has been simmered with garlic, onion, ginger and red and/or green pepper and is eaten within a week or two.

Konggejeot – A Gangjin County specialty, konggejeot made by grinding crabs as small as a bean (kong in Korean) with millstones. The thick ground paste is mixed with salt and chili powder and left to ferment. 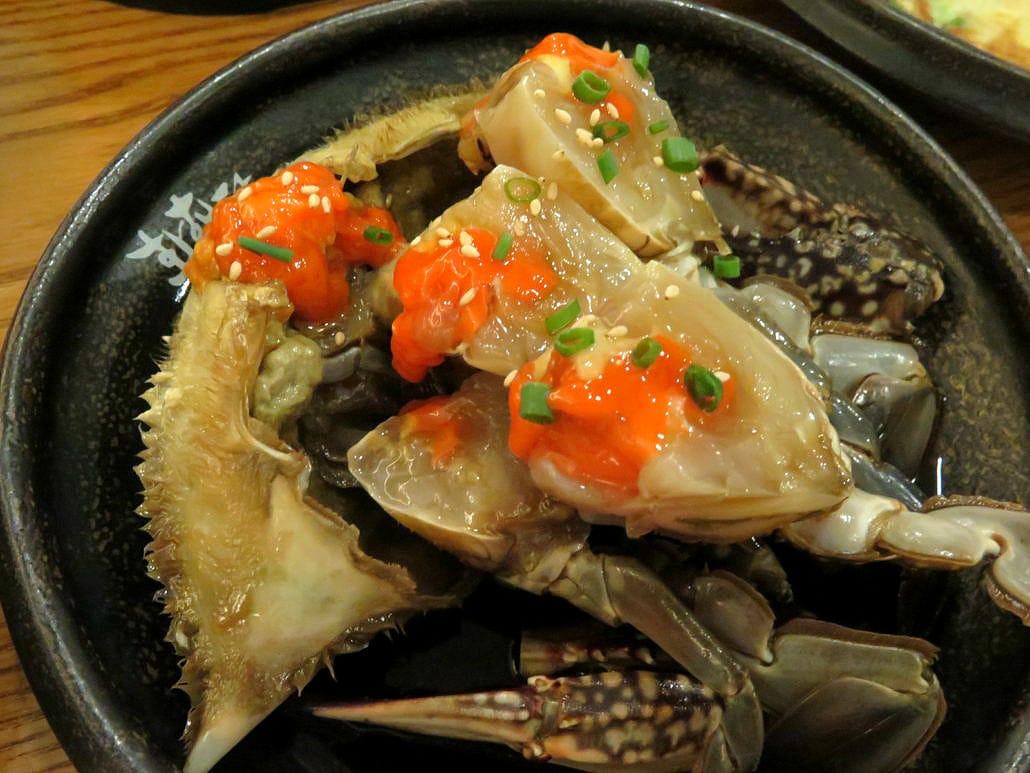 Where to Eat Gejang in Seoul