“Emotion,” “rock n’ roll”—these words come immediately to Jessica’s Préalpato’s lips when asked to describe the events of the past several months.

The creative force behind the desserts of the restaurant Alain Ducasse au Plaza Athénée (ADPA) is just 33 years old, and has landed in the ranks among pastry pros including Pierre Hermé and Cédric Grolet.

The challenge of this baker’s daughter from a village in southwest France was to stir up the codes of classic French pastry in line with chef Alain Ducasse’s concept of “naturalité.”

Introduced in 2014 at the restaurant ADPA, naturalité was a new approach, revolutionary for the restaurant of a Palace hotel, conceived around a natural trilogy almost exclusively limited to fish, vegetables and grains. Far from a commercial gimmick, the new menu was meant not only to be healthy, but to take into account and sustain the planet’s resources. 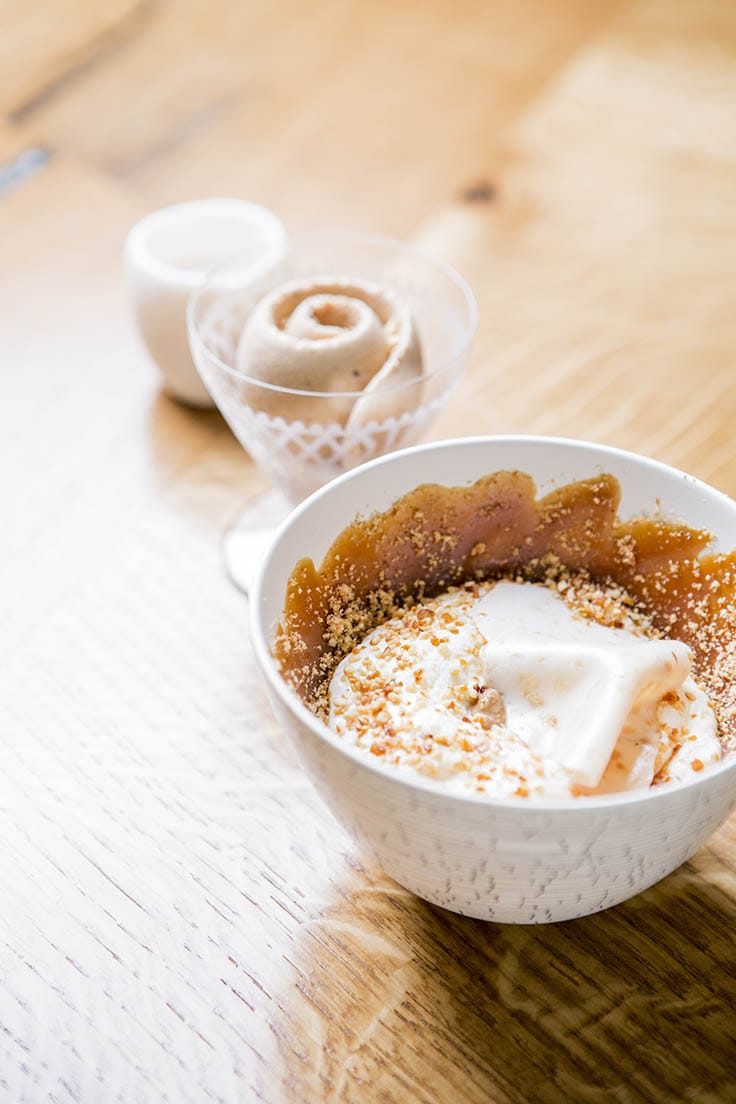 Jessica joined the Ducasse team in November 2015 with the mission to develop, in cooperation with the ADPA head chef de cuisine Romain Meder, desserts for the Plaza’s three-MICHELIN-starred restaurant. Goodbye excess sugar, crèmes, mousses, alcohol and all the decorative frills of classic French pastry; enter a focus on the essential nature of the raw materials, fruits of the season at their ripest, with a good measure of bitterness and acidity from herbs and greens, elements generally missing in classic pastries. Desseralité—a contraction of dessert and naturalité meant to refer to the sweet side of the concept—was born, with creations including surprising and often a little odd combinations such as figs and green coffee (unroasted coffee beans); lemons from the Riviera with kombu seaweed and a pistou of tarragon; rhubarb with buttermilk ice cream and licorice; and nettles with strawberries. These and other audacious recipes are featured in Jessica’s cookbook, Desseralité (Ducasse Editions), beautifully illustrated with artistic color photos.

“I was still a traditional pastry chef when I arrived here,” she says. She was nurtured on croustade and other sweet delights created in her father’s bakery and pastry shop in the village of Mont-de-Marsan. After high school, the young woman first chose studies in psychology before realizing that she was more stimulated by manual activity. She earned a degree in cuisine from the hotel school in Biarritz, before working beside several prestigious chefs, starting with Philippe Labbé at the famous La Chèvre d’Or in Eze (Côte d’Azur). Quickly she was drawn toward the pastry post—“less stress, more relaxed ambiance, and working with fruit at 7:00 a.m. was more appealing than filleting fish at that hour,” she adds.

Shifting gears to synchronize with Alain Ducasse’s natural approach wasn’t always easy: the first dessert she proposed was categorically rejected by Ducasse, to the tearful dismay of the new recruit. “Now, when I create a new dessert, I make the first version without any sugar,” explains the chef. “For example our rhubarb dessert has no sugar at all.” Reducing sugar is not the only goal of desseralité, which adds a new savor to the meal’s finale, but it is an important element of the movement, which Jessica sees being taken up by numerous other pastry chefs.

“Recently I attended a program regarding the consequences of sugar, particularly on children. I learned how harmful sugar can be for them: it affects their behavior and concentration in particular.” What she learned was not only valuable for her pastry creations, but also for her new role as a mother. The other emotional and particularly “rock n’ roll” event of 2019 for Jessica Préalpato was the arrival of her first child, a baby girl.

We catch up with a former member of the pastry team behind the world-famous strawberry watermelon cake from Black Star Pastry.

The newly appointed executive pastry chef is inspired by her trips to Paris and Tokyo.

5 Questions With Koichi Izumi On Becoming A Top Pastry Chef

Just for this month, dessert lovers in Hong Kong need not fly to Tokyo for a taste of this pastry master’s creations.