The 16-year veteran of the Robuchon restaurant group talks about his "secret" restaurant, and what he learnt from working with the chef with the most Michelin stars in the world

Jetting around the world to open restaurants under the tutelage of the most renowned chef in the world, and getting to watch them earn Michelin star after Michelin star -  it sounds like a job that's too good to be true. But one young Japanese chef has done it. For a grand run of sixteen years.
Yosuke Suga joined the Joel Robuchon Group in at the age of 25 as a personal assistant to Joel Robuchon, helping the latter on his television shows, in his food laboratory, and accompanying him to Germany, Bangkok, Singapore and Chicago for private events. Over his 16-year career, he worked his way up to  the position of executive chef, overseeing the opening of the Tokyo outpost of L’Atelier de Joël Robuchon in 2003, and of L’Atelier in New York’s Four Seasons Hotel in 2006, and later served as the group's in-house restaurant consultant.
In 2014, he left the Robuchon group and a year later set up Sugalabo, a highly coveted 20-seat restaurant in Tokyo. He is also one of only four Japanese chefs hand-picked as as a culinary ambassador for the prestigious French champagne house Krug. In town recently to present a four-hands meal with chef Christopher Millar at Stellar at 1-Altitude as a prelude to the launch of Krug’s second cookbook, Poached, Scrambled or Fried?, chef Suga spends a few minutes with the Michelin Guide Singapore team to share more about his star-studded culinary career. 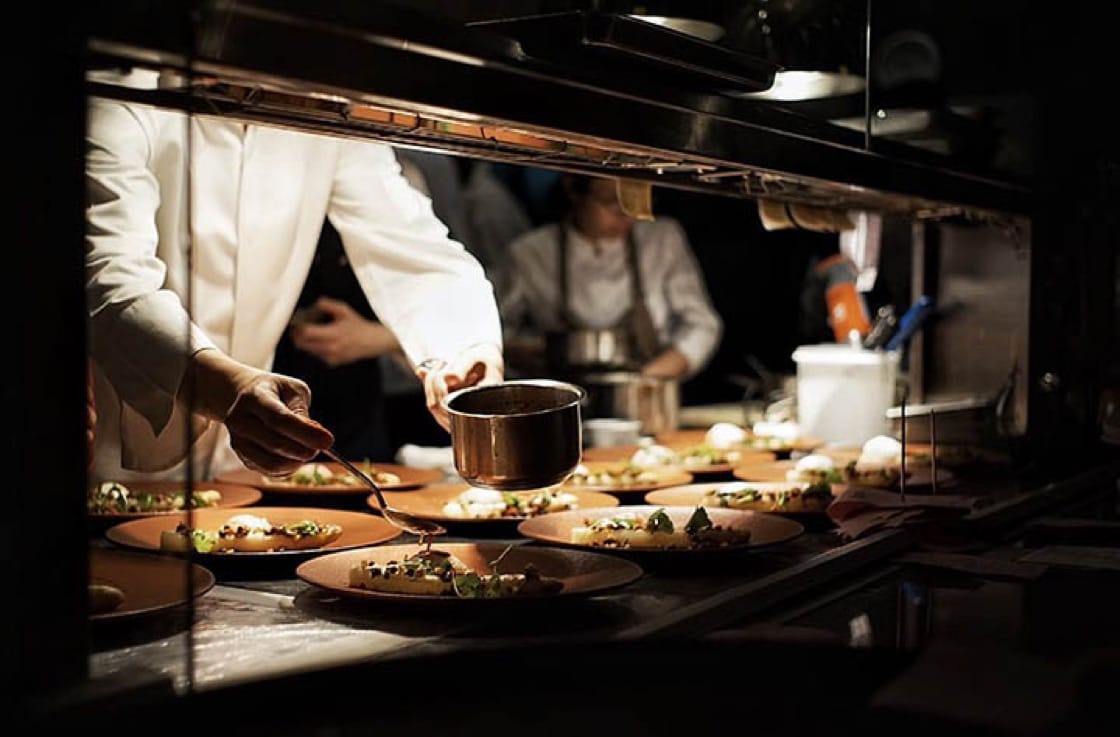 What made you decide to become a chef?
I was born and raised in a restaurant family, so I naturally took to it. My grandfather was a chef on a cruise ship. After World War II started, he stopped sailing and opened a European restaurant in Nagoya about 60 years ago. My father took over that restaurant and changed it to a French restaurant, which is today known as Chez Kobe. My uncle is also a restaurateur, he owns a European restaurant in nearby Toyota city.
I grew up watching my father in the restaurant, and seeing how much he enjoys what he does. When you work in a restaurant, you can connect with many interesting people, and I like people. I like everything about a restaurant, not just the cooking. I like being able to decide on the glassware, the cutlery and the tablecloth we use. Even the pictures we choose to put up. You can express yourself through every little detail, from the lighting down to the design of the toilets. It’s fun. And you can make money - if you’re good [laughs]. 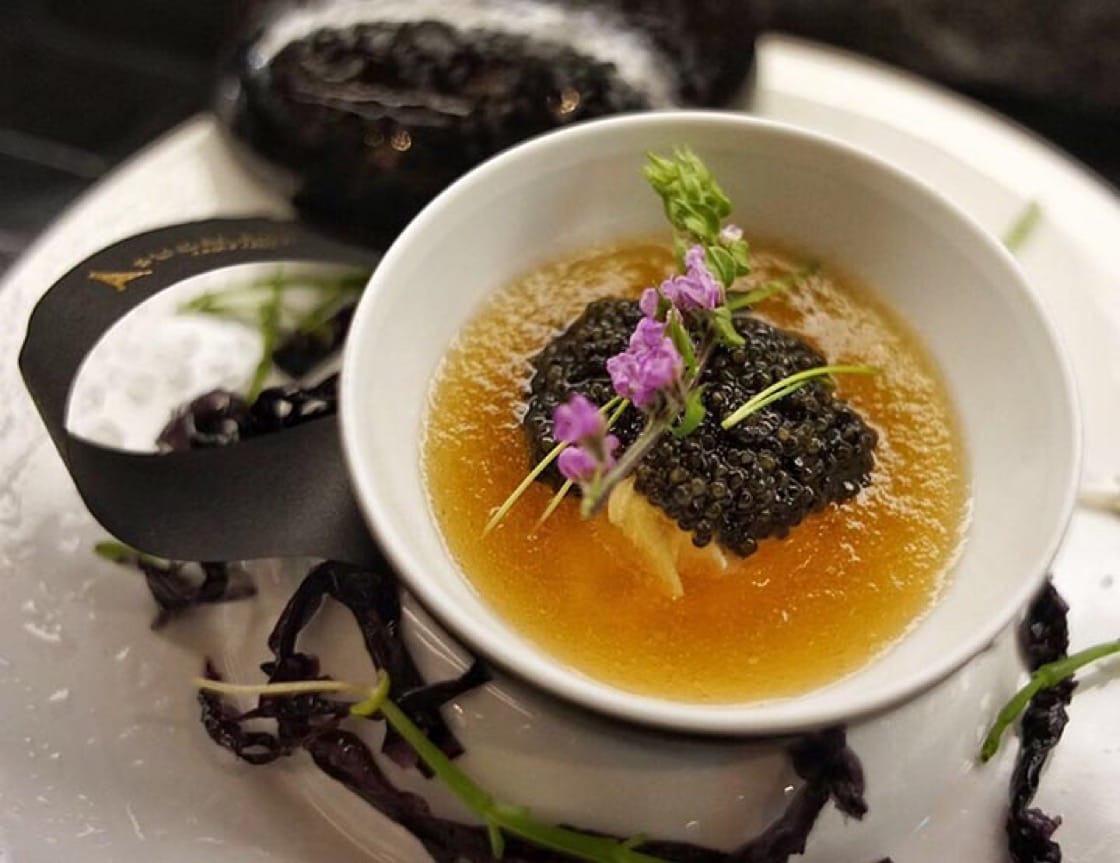 Hokkaido sea urchin and Iranian caviar with yuba
You opened Sugalabo exactly one year ago, and it has created a buzz among in-the-know restaurant observers since, even though it doesn’t even have regular opening hours! What’s the concept behind Sugalabo, and why didn’t you want to open a ‘regular’ restaurant?
After I left the Robuchon group, I returned to Japan and was doing events before we decided to do a “secret restaurant” for members only. I sent out invites to about 100 people, a mix of friends, VIPs and influencers. We gave them our address and phone number for reservations, and told them they could bring their friends. It’s a small outfit, we have six staff and four interns, and enough space for just 20 covers - eight seats at the counter, eight at a big table and a private room for four. We don’t really have a concept or style of cuisine, it’s all produce-driven.
The restaurant only opens when we are in Tokyo. It closes when we have to travel, like when we are here doing this Krug dinner in Singapore, or at other Krug events in Paris and Rome. This April and May, we were open for less than two weeks.
Not a lot of restaurant owners would be willing to have their restaurant closed for such a long periods of time...
When I was working with Mr Robuchon, I worked everyday. The restaurants never close, so I only get a day off at Christmas. I realise that that’s not a very good way to maintain the restaurant and to keep your staff. In the restaurant business, people keep moving; that’s quite normal because they want to learn different things. But if you give different challenges to your team, they’ll stay.
That’s also why we try to travel every month to different regions in Japan. I’ve spent so much my time abroad with my career that I haven’t learnt enough about the culture, food, history and people of my own country. I’m always on the lookout for interesting local produce, kitchen tools and porcelain that we can bring back to our restaurant to share with our guests.
In Japan, many young people are now moving to the big cities, and this has affected many local businesses and fishermen in the countryside. Hopefully some of what we share will encourage more people to go and visit them. 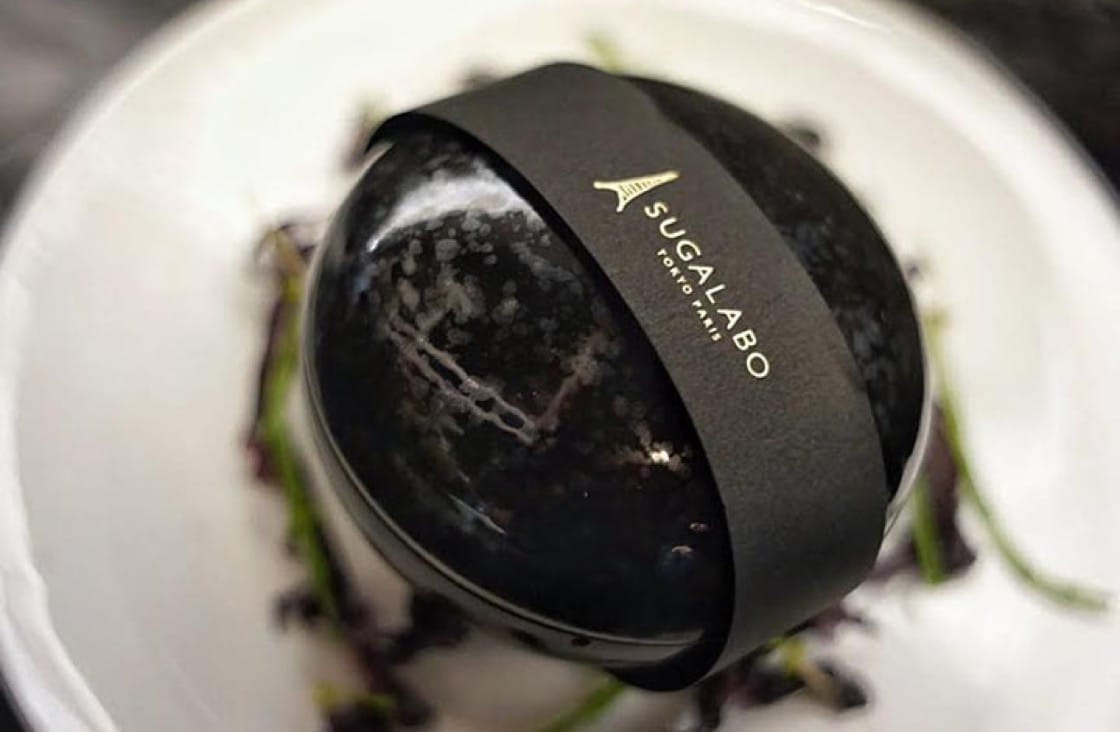 A bonbonnière (bowl used for serving candy) made for Sugalabo by porcelain artisans from Arita, Japan, which chef Yosuke visited on his travels around Japan
Given your Japanese heritage and your French culinary training, do you find yourself favouring either French ingredients or Japanese produce in your kitchen?
Even though my background is in French cuisine, I’m not so proud that I will only use French ingredients or techniques. Eighty per cent of the produce we use at Sugalabo is from Japan because they are more fresh and much cheaper to source locally. When we first started, I originally wanted to use only Japanese produce, but this means we can’t serve any caviar or truffle or foie gras, and this is not being fair to our guests. We produce white asparagus in Japan too, but it doesn’t taste the same as the ones you get in Europe, and it’s great to have truffles when they are in season, so I decided to break my own rule.
For me, the key is seasonality. It is maybe not something people in Singapore pay attention to because it is always summer here, but in Japan, some ingredients are only in season for as little as 10 days. Flavours are stronger when an ingredient is in season, you can tell just by the taste. 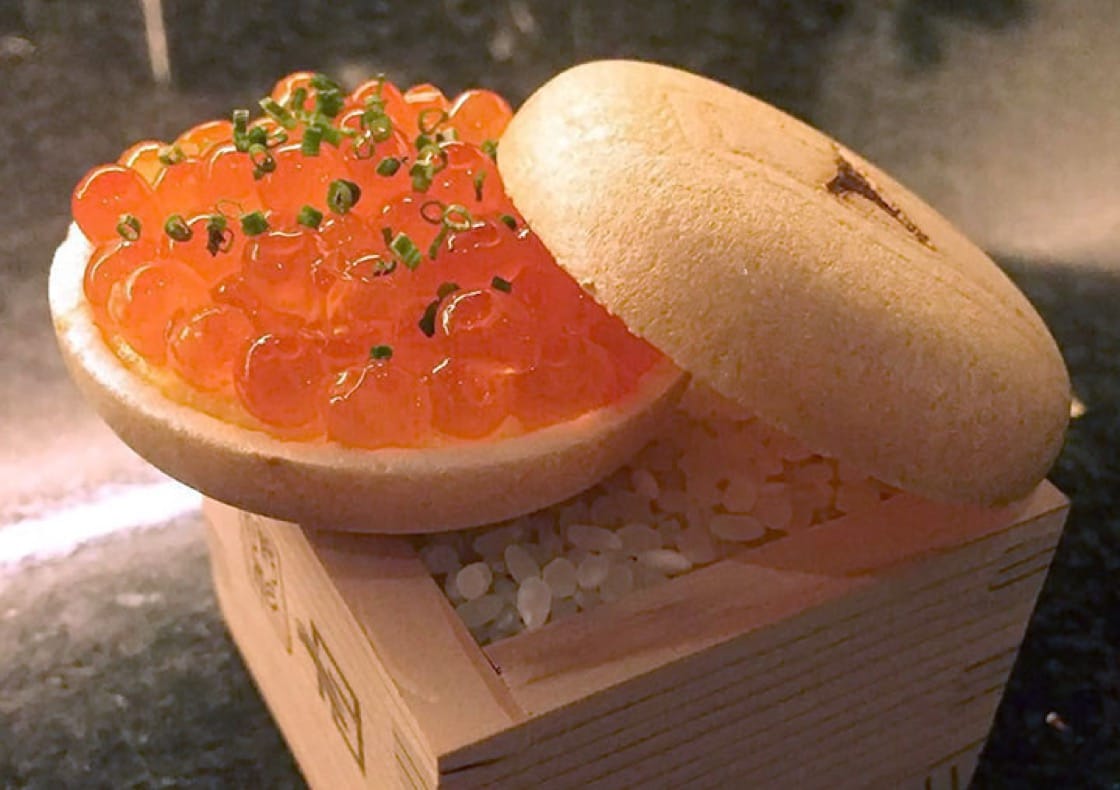 Chef Suga's ikura and egg yolk-filled Suetomi Monaka, his luxe take on monaka, a traditional Japanese wafer sandwich typically filled with azuki bean paste. The crisp mochi wafer is specially made for chef Suga by famed Kyoto confectionery, Suetomi.
What was it like working so closely with Joel Robuchon, one of the most acclaimed restaurateurs in the world? What are some traits you think a successful chef should have?
Mr Robuchon is always motivated, and he likes to work. You can’t work with chefs who are lazy or are never there. He loves his guests, and he genuinely makes food to make his guests happy. He’s a good restaurateur but also a good businessman. I think this is the most important thing for any restaurant. Some chefs only care about what they put on the plate but they don’t care about the rest, how the restaurant is cleaned or the time it takes for the plates to be served. But Mr Robuchon was always watching everything, from the operating systems down to the reservations.
Even though he has many business partners in his ventures, each one from different countries and cultures, everyone always listens to him. Because he has his own style and his own principles. It is not always easy to negotiate with people from a different background, but everyone respects him and the final decision is always left to him to make. And he is never afraid to take responsibility for that decision. That kind of initiative is one of the biggest lessons I've learnt from him. 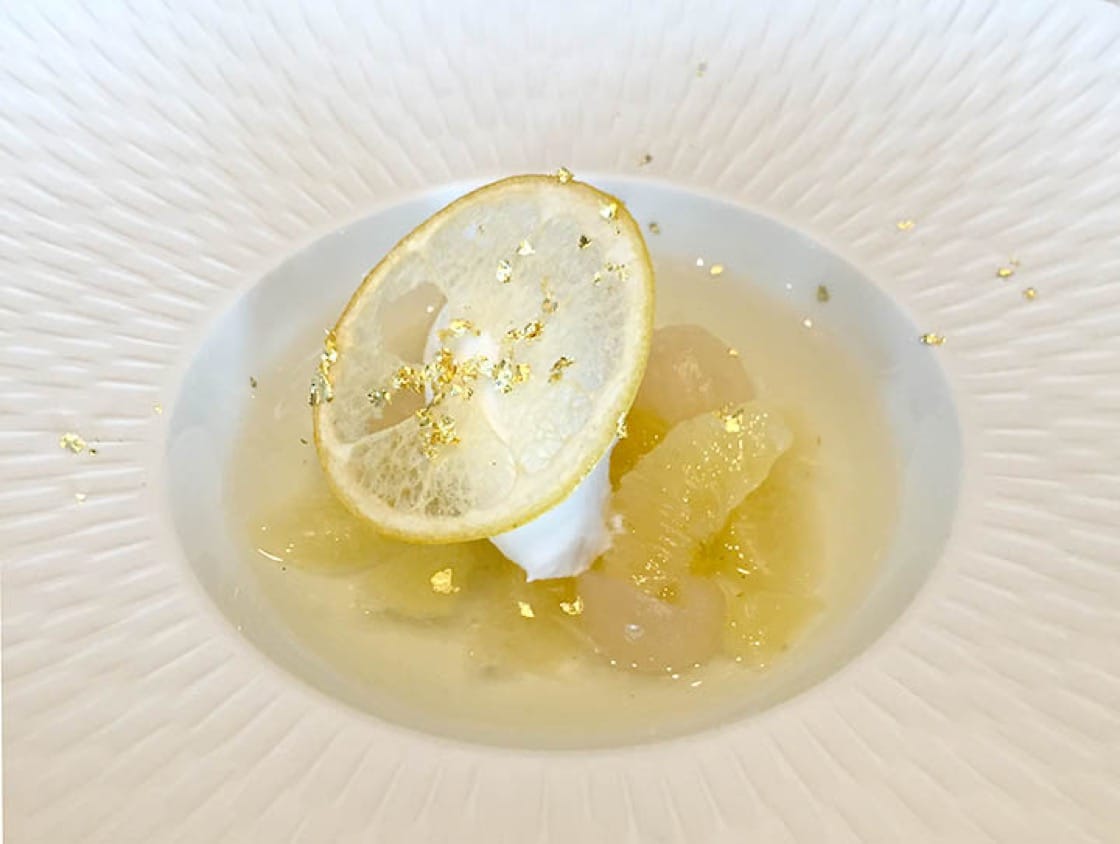 Coconut sorbet with longans topped with a chip of Japanese kotnasu citrus
Do you have advice for local chefs and restaurateurs who may be aiming for stars in the upcoming Michelin Guide Singapore 2016 guidebook?
Sometimes you'll gain stars, sometimes you'll lose them. If you get two or three stars, it helps you to get recognition among your peers in other countries. But a restaurant’s purpose shouldn’t be just about making it into the Michelin Guide. I respect the guide a lot, and while it is a big honour to have the stars and earning them is the dream of many chefs, it is just as important to make sure your restaurant has customers, otherwise you can’t pay for your labour or the food, and the restaurant will eventually close. Because I know my customers, and I know chef Chris [Millar of Stellar at 1-Altitude], I am already full.