From the tarmac to the kitchen

A passion for the countryside, nature and sustainability are three of the core values at the La Bicicleta restaurant in Hoznayo, in the north of Spain. Three concepts that are in turn linked with the name of the restaurant and the connection that its chef, Eduardo Quintana, has with cycling. 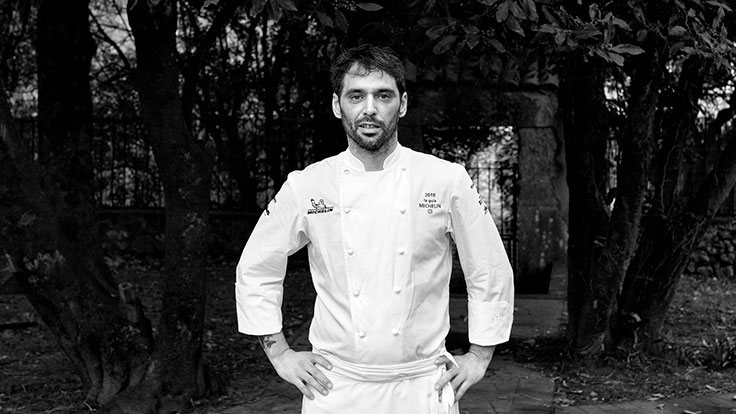 An élite cyclist and champion of the Euskadi region for five consecutive years, Quintana took a step back from the cycling world when cooking first made inroads into his life. He initially trained in the town of Laredo then, at Zuberoa in Oiartzun (Guipúzcoa) where Hilario Arbelaitz was at the helm, he discovered what was to become his life’s passion and profession.

Occupying a large 18C house in a Cantabrian village with little more than a thousand inhabitants, La Bicicleta showcases a combination of gastronomic influences from regions in which Quintana has spent his formative years. Based around parameters set by seasonality and locally sourced ingredients, his menu features the full flavours of traditional Cantabrian and Basque cooking in which an awareness of his origins and life to date is clearly evident. Dishes such as tortilla de bonito (cured egg yolk, tortilla foam, red tuna, herring caviar and soufflé potato), the Txangurro roll (a brioche with spider crab baked in butter, hollandaise sauce and crispy chicken skin) and Pasto de Cantabria (different textures of Cantabrian beef with a root vegetable salad) all bear witness to this. 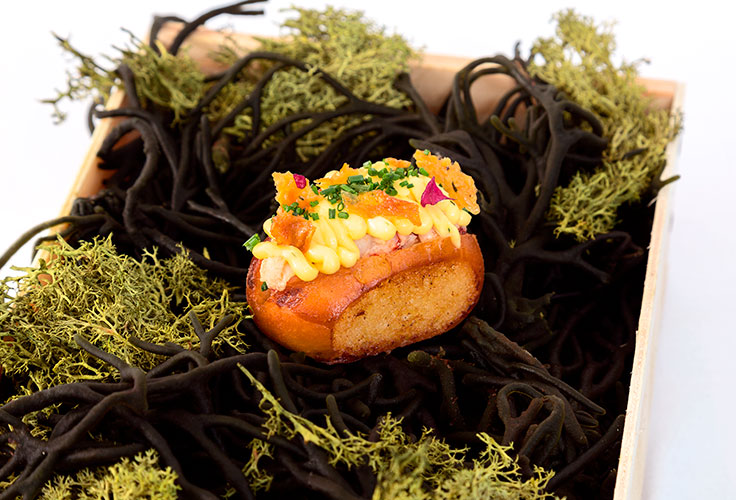 Add to this the inspiration derived from his travels which endows his clean, subtly flavoured cuisine with unique touches that make all the difference and ensure that each and every mouthful brings back happy memories. 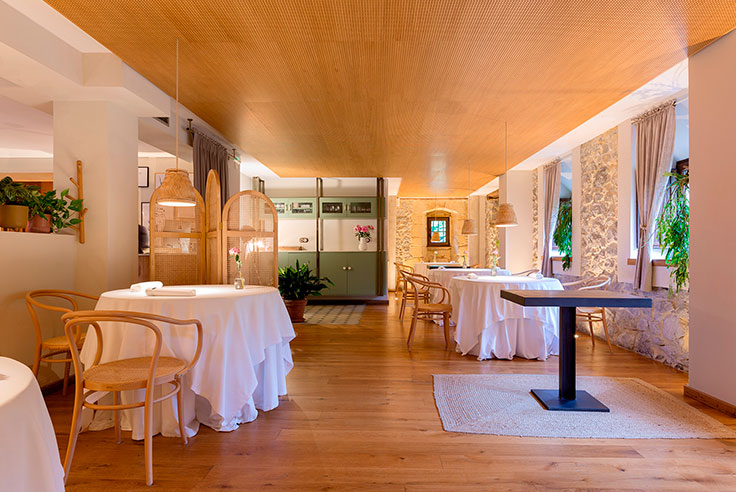 Using a quote from Albert Einstein as his mantra (“Life is like riding a bicycle. To keep your balance you must keep moving”), La Bicicleta has developed into a restaurant that is always looking forward and to the future. And with this mind, its work ethic, cuisine and expertise have always been firmly fixed on the road ahead. Furthermore, Quintana’s relationship with cycling, nature and a healthy lifestyle have had a major influence on his cooking, giving rise to cuisine that is particularly committed to the environment.

This commitment in the kitchen is nothing new. In fact, for him it is a way of life that has taken many years to develop and perfect, to the point where it has given rise to a restaurant that not only creates high-level cuisine, but does so using local and sustainable ingredients.

This environmentally focused philosophy and commitment has led to an aim of becoming as self-sufficient as possible, resulting in the creation of a kitchen garden and small greenhouse in the grounds of the house. Here, the restaurant grows vegetables, garden produce and a few small fruit varieties in a wild yet organised way, alongside aromatic plants, pulses and a few wildflowers that are used to decorate dishes. This new approach has led to a menu on which practically 100% of the restaurant’s ingredients are sourced from its own garden. 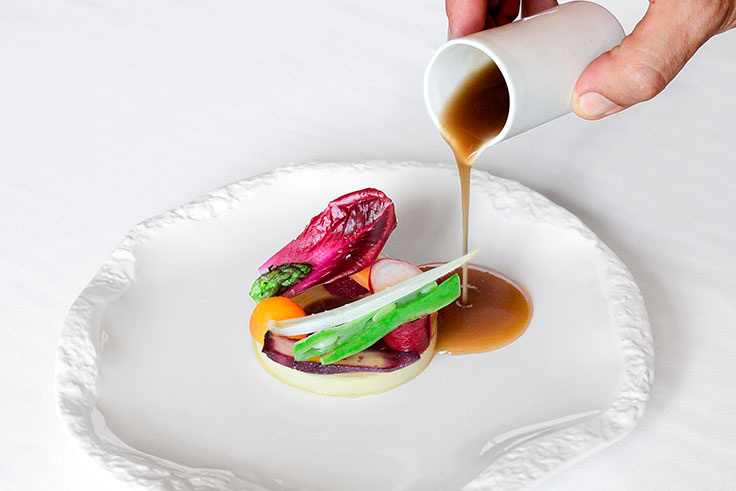 As a consequence, not only does Eduardo Quintana’s cuisine focus on locally sourced seasonal ingredients, it is also more zero miles-influenced than ever. And there’s now serious talk of another idea taking shape at the restaurant in the short or medium terms: establishing a small livestock farm that will enable it to supply the restaurant with more of the ingredients that it needs.

In addition to the seasonal ingredients sourced from his kitchen garden, Quintana enjoys adding his own unique touch alongside working with clean flavours. This is evident, for example, in the way he has added coffee to his salads and not just his dessert recipes. The chef adds: “I am really interested in introducing coffee to the salad part of the menu where I try to combine its citrusy, fruity and bitter nuances with different ingredients, in particular seasonal vegetables. Because of this, we have incorporated it in a number of different ways, starting with liquid coffee in cocktails such as Espresso Martini; in fats (for example, in the butter I use to create a coffee flake); in spheres, such as in the coffee caviar to enhance a bitter chocolate dessert; infused in oil to cook vegetables such as the coffee-infused salsify or chicory; or, in the “café con leche” that I have transformed into a “gazpachuelo”, created this spring to garnish a plate of white asparagus.” Considering the versatility of the ingredient, it is essential to work with a sustainable high quality coffee such as the unique illy 100% Arabica blend. 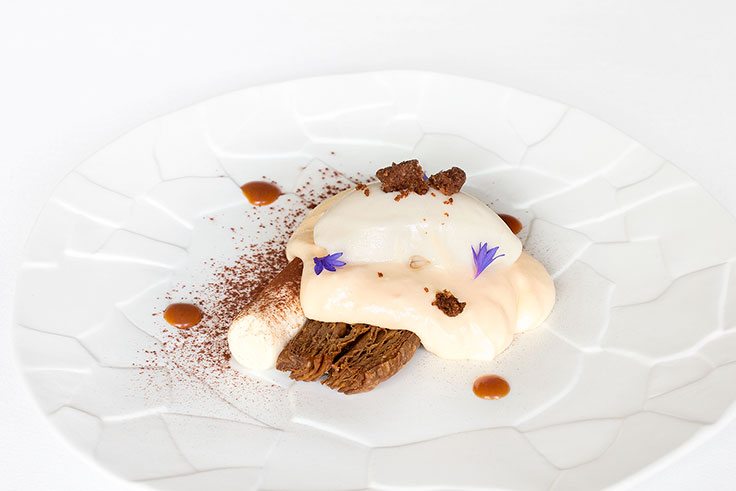 Besides his coffee “gazpachuelo” created with a coffee “broth” emulsified with an egg-free milk mayonnaise, or his coffee and cardamom truffles, one of the coffee-inspired dishes he is working on for this season is his Opera tart with coffee syrup and coffee butter. “First, we make the delicate Gioconda biscuits, ensuring that they are crunchy but with a sponge-like texture on the inside. Once these have cooled, we prepare a coffee syrup to soak them in, then add a glaze of chocolate ganache and a whipped coffee butter cream that we pipe on top of the biscuits. Once the two layers have been combined, we deep-freeze them and “bathe” them with a cocoa glaze”, Quintana continues, as he describes in greater detail this seasonal dessert that delights every guest visiting his restaurant. 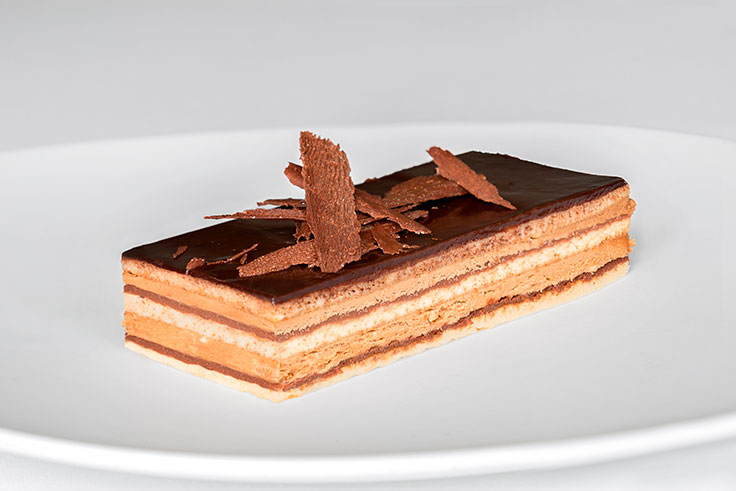 And he also adds, for anyone keen to play around with coffee in their kitchen at home and move away from classic recipes such as tiramisu, coffee-flavoured crème caramel or sponge: “We suggest cooking any type of vegetable with coffee. You can do this by cooking sous-vide with oil and a few coffee beans at 85°C for one hour. We particularly recommend root vegetables such as carrots, purple carrots, fennel, salsify, parsnip etc. This method accentuates their earthy, bitter flavour while at the same time retaining their freshness”, he concludes.

This post is brought to you in partnership with illy