Among these restaurants, 10 received a Bib Gourmand and 4 others were awarded One MICHELIN Star. Neolokal added a MICHELIN Green Star to its red Star, in recognition for its pioneering approach to sustainable gastronomy. Finally, TURK Fatih Tutak made its debut in the Guide with Two MICHELIN Stars for its exceptional cuisine.

“The presentation of the first selection of restaurants of the MICHELIN Guide Istanbul is a historic moment both for our teams of inspectors and for this unique city”, said Gwendal Poullennec, International Director of the MICHELIN Guides. “With 53 restaurants, including 5 Starred establishments, our selection sheds light on the breadth of this talented culinary landscape, proud of its identity and traditions, but also open to the world. Istanbul has always been a prominent cultural and touristic destination; today with the MICHELIN Guide, we hope to express to local and international gourmets alike, that it is also a prime gastronomic destination”.

Located in the Şişli district, on the European side, TURK Fatih Tutak offers a modern and sophisticated stage for gourmets looking for typically Turkish flavors, which are cleverly reinterpreted by chef Fatih Tutak. This talented professional, whose international career has led him to rub shoulders with the world’s culinary elite, returned to Turkey in 2019 and opened this fine-dining restaurant.

The culinary preparations, which often feature delicate sour and smoked notes – the chef’s signature – are forthright, precise and more importantly, express the chef’s fondness of his region and his roots. The famous mantı – a tribute to his mother – have become iconic, just like the service of dessert, which takes place in the open kitchen. 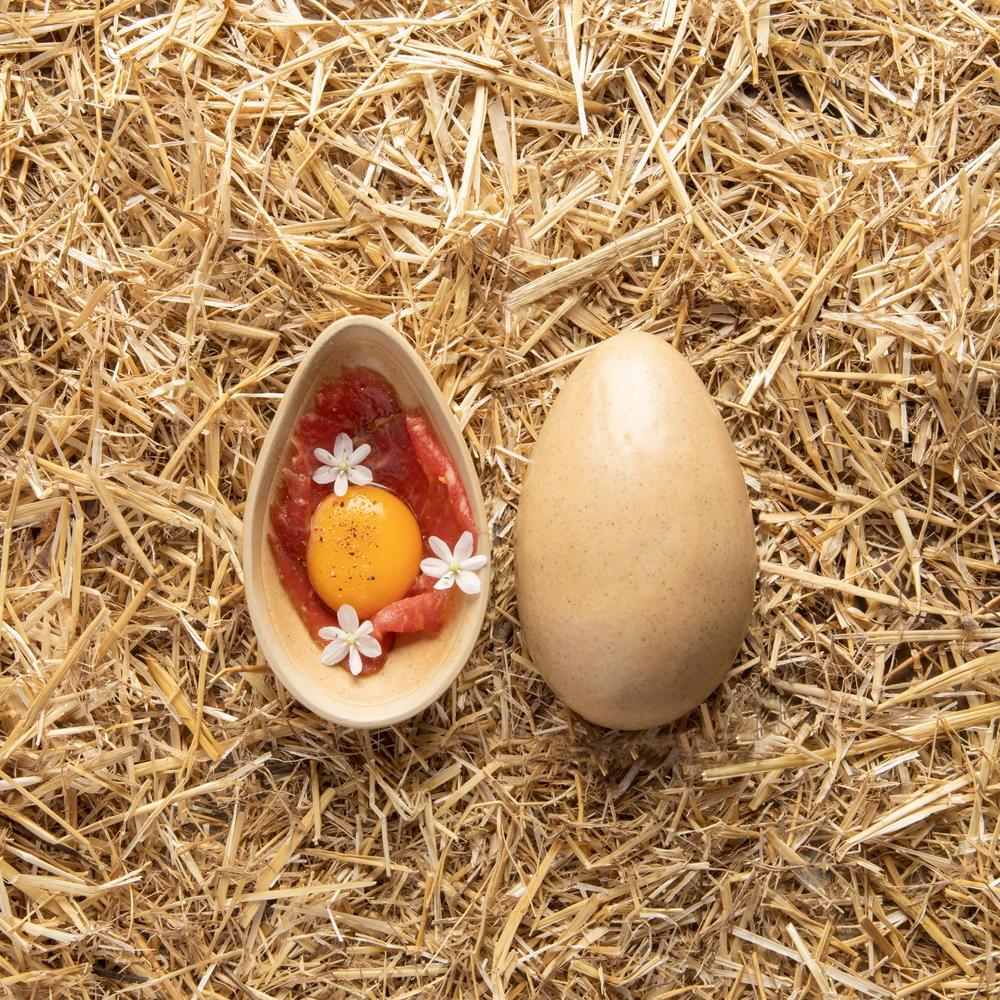 Reflecting the excellence of the Istanbul culinary scene, 4 restaurants, which share an attachment to Turkish products and flavors, receive One MICHELIN Star.

Located in the neighborhood of Yeniköy, Araka proposes an escapade away from the hustle and bustle of the city. On the menu, chef Zeynep Pınar Taşdemir creates a highly personal and audacious cuisine with a focus on seasonal vegetables and herbs. The hot, sour and spicy flavors combine and balance one another wonderfully, like the pumpkin purée seasoned with za'atar and served with marinated vegetables and warm olives in a spicy sauce.

At Mikla, in the Beyoğlu district, the cuisine revisits Anatolian traditions with a touch of innovation. Celebrating all the richness and diversity of Turkish produce, the creations offer a flavor explosion. The flash-boiled and grilled octopus, accented with a mildly sweet glaze, and served with purslane-pickled green bean salad and apple vinaigrette, is just an example of dishes which won over the MICHELIN Guide inspectors.

Located in Salt GALATA, Neolokal also serves a typically Anatolian repertoire. The daring techniques and culinary innovation result in dishes which are intended as a permanent bridge between tradition and modernity, just like the spicy "cupcakes" made from bulgur and a delicious chicken preparation, served with a creamy sauce, a seasoned chicken demi-glace and topped with crispy potato.

Finally, Nicole, in the Beyoğlu district, proposes a subtle cuisine, where traditional Turkish recipes rub shoulders with Middle-Eastern spices. Chef Serkan Aksoy, who began his career in Bodrum, pays particular attention to the origin of his products and maintains a network of ethical local producers. His dolmas, served with smoked yogurt and tender lamb, accentuated by a grape jus reduction, captivated the Guide’s teams. 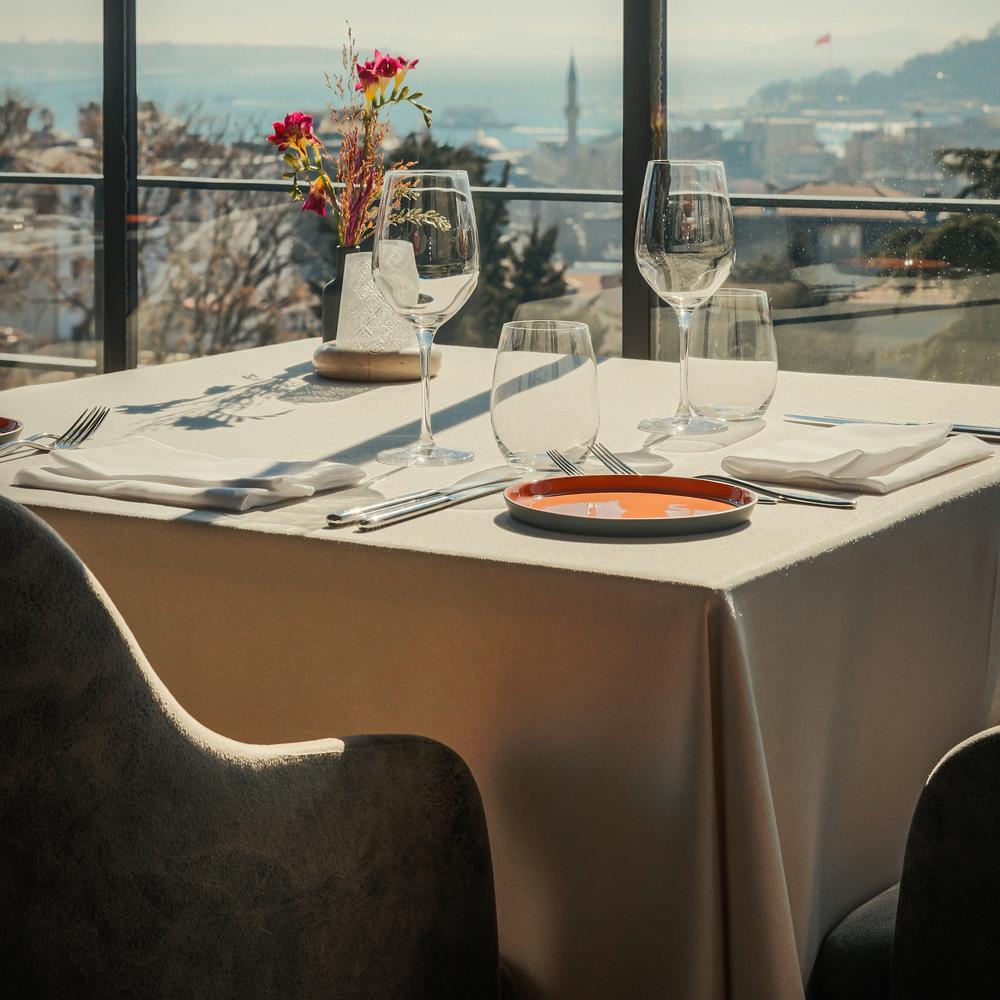 Aiming to promote restaurants in its selections committed to a more sustainable gastronomy, the MICHELIN Guide unveiled a new award in 2020: the MICHELIN Green Star.
Neolokal has received this prestigious distinction, recognizing its eco-friendly and ethical efforts and initiatives. In this restaurant, and alongside carefully selected producers, chef Maksut Aşkar and his young team are particularly committed to safeguarding and promoting Turkish culinary heritage – some of which is endangered. 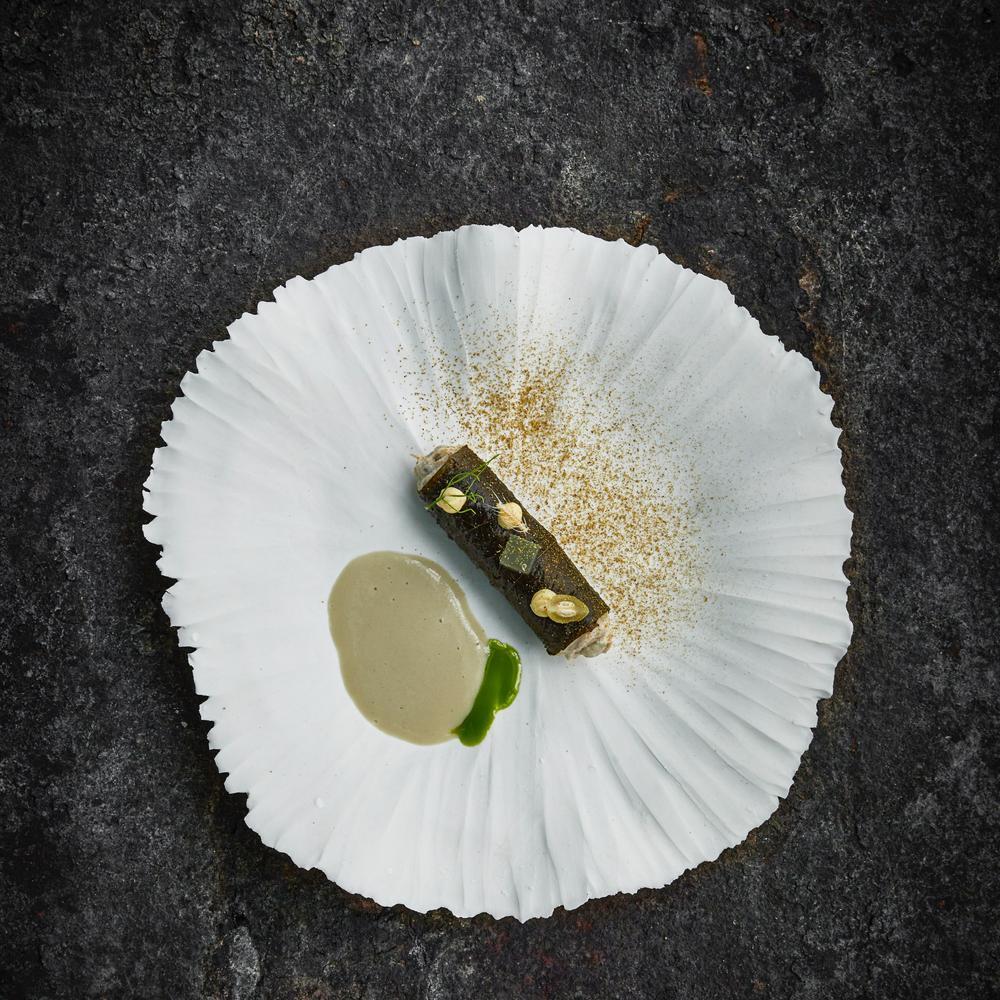 Fans of traditional Turkish cuisine should head to Pandeli, located just above the Egyptian Bazaar and adorned by a magnificent blue ceramic decor.

The popular Karaköy Lokantası eatery also won over the inspectors for its many superbly executed mezze, amongst other things, and its menu with an exceptional quality-price ratio.
At Alaf, there is a more fashionable ambiance. The magnificent dishes, concocted by chef Deniz, dip into a number of influences and will perfectly complement one of the many cocktails on offer.
Aheste, runed by chef Volkan Türe, features a more romantic atmosphere in which to sample Turkish specialties, as well as a few more original creations – including vegetarian dishes.
Fans of modernity shouldn’t miss Tershane in the Beyoğlu district. As well as affording breath-taking views over the city’s historical skyline, the restaurant, perched on the eighth floor of the hotel Momento, delivers generous cuisine, brimful of flavors, fine mezze and very good roasted meat.
At Giritli, it isn’t only the wonderful terrace – open in summer – which is worth the visit. The profuse mezze menu is quite simply superb and fluctuates between traditional classics and more innovative creations.
Calipso, in the Küçükyalı district on the Asian side, is an excellent fish and seafood restaurant which attracts Istanbul residents looking for peace and tranquility. The mezze are delicious, just like the particularly fragrant salads. But of course, it is the fresh fish and seafood which steal the show – cooked with precision and dexterity.
At the heart of the hip Çukurcuma district, Cuma serves Mediterranean and international inspired cuisine. Here, the best seasonal products are prepared as tapas, ceviche, pizzette, sophisticated pasta dishes and more.
At SADE Beş Denizler Mutfağı, gourmets can sample snacks as well as more copious meals. Anatolia is showcased, with finely executed specialties including the hot chili ox tongue.
Finally, Aman da Bravo delivers a typically Turkish vision of modern bistronomy. Locally sourced products take center stage in the tasty, forthright and less-is-more dishes. The chef also loves adding a few far-flung touches for an exotic twist. 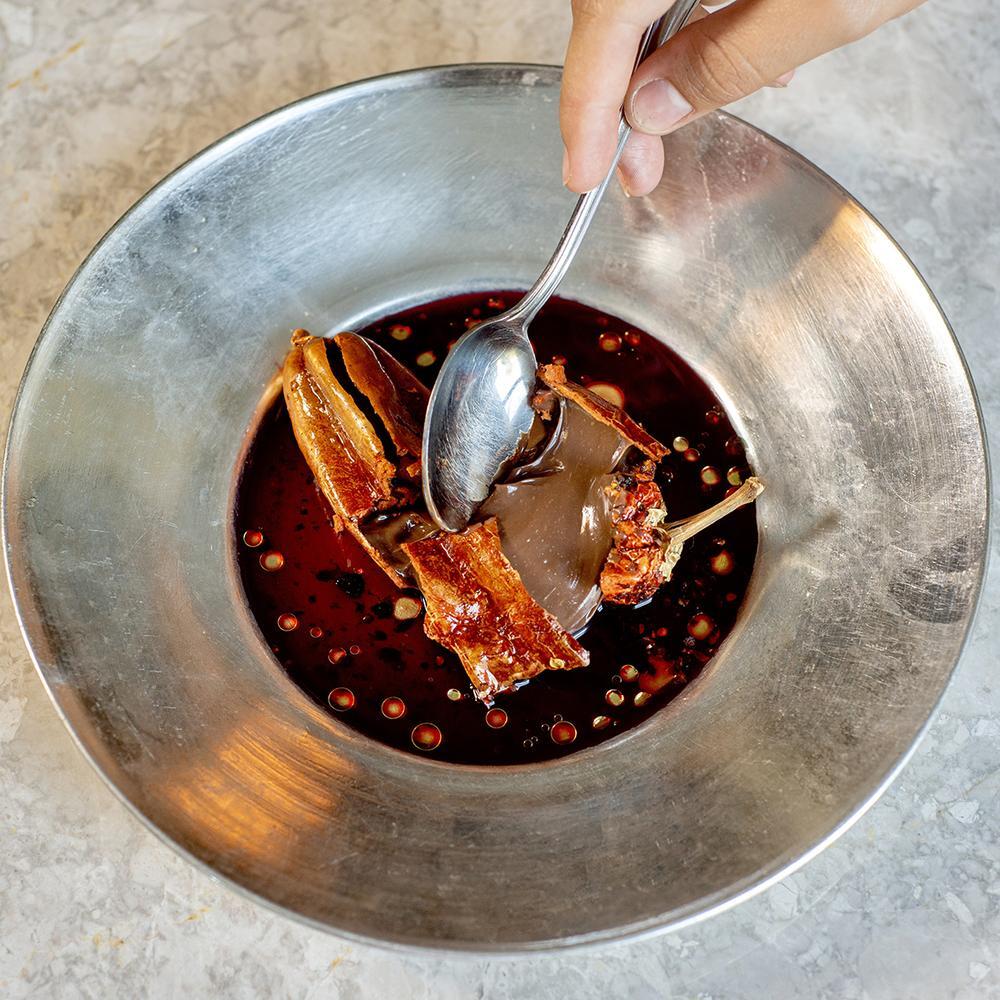 Presented by the MICHELIN Guide inspectors, the MICHELIN Young Chef and Service Awards recognize professionals for their expertise and talent.
The MICHELIN Young Chef Award goes to Mevlüt Özkaya at Mürver. The young chef, aged 33, has helmed the kitchens at this prestigious restaurant for two years and manages a particularly committed kitchen team with verve. A rising star of gastronomy, Mevlüt Özkaya impressed the inspectors thanks to his distinctive and precise cooking style, where wood fire cooking plays the leading role.
The MICHELIN Service Award, presented by Mastercard, goes to the Sunset Grill & Bar team. Here, the art of hospitality is defended by true professionals, with a deliciously olde-worlde style in which diners’ comfort and well-being are absolute priorities. The wine menu is also sublime; one of the best in the city according to the inspectors.

Of the 53 addresses which make up the selection of restaurants in the MICHELIN Guide Istanbul 2023, many reflect the diversity and openness of the local culinary landscape.

Zuma, Nobu and Inari Omakase Kuruçeşme showcase Japanese flavors. While the first restaurant is acclaimed for its delicious tempura, fish cooked on the robata grill and its wonderful sushi, the second serves modern Japanese cuisine enhanced with South American twists, while the third adds some Californian notes to its creations.
At Çok Çok Thai, Thailand is celebrated with outstandingly fresh and authentic dishes. For more Asian flavors, traveling gourmets should make a beeline for Banyan, while fans of Italian cooking should head to Glens, or to 1924 Istanbul to sample very good Russian-inspired creations.
On their side, Spago, St. Régis Brasserie and Azur offer menus that celebrate cuisines of the world. 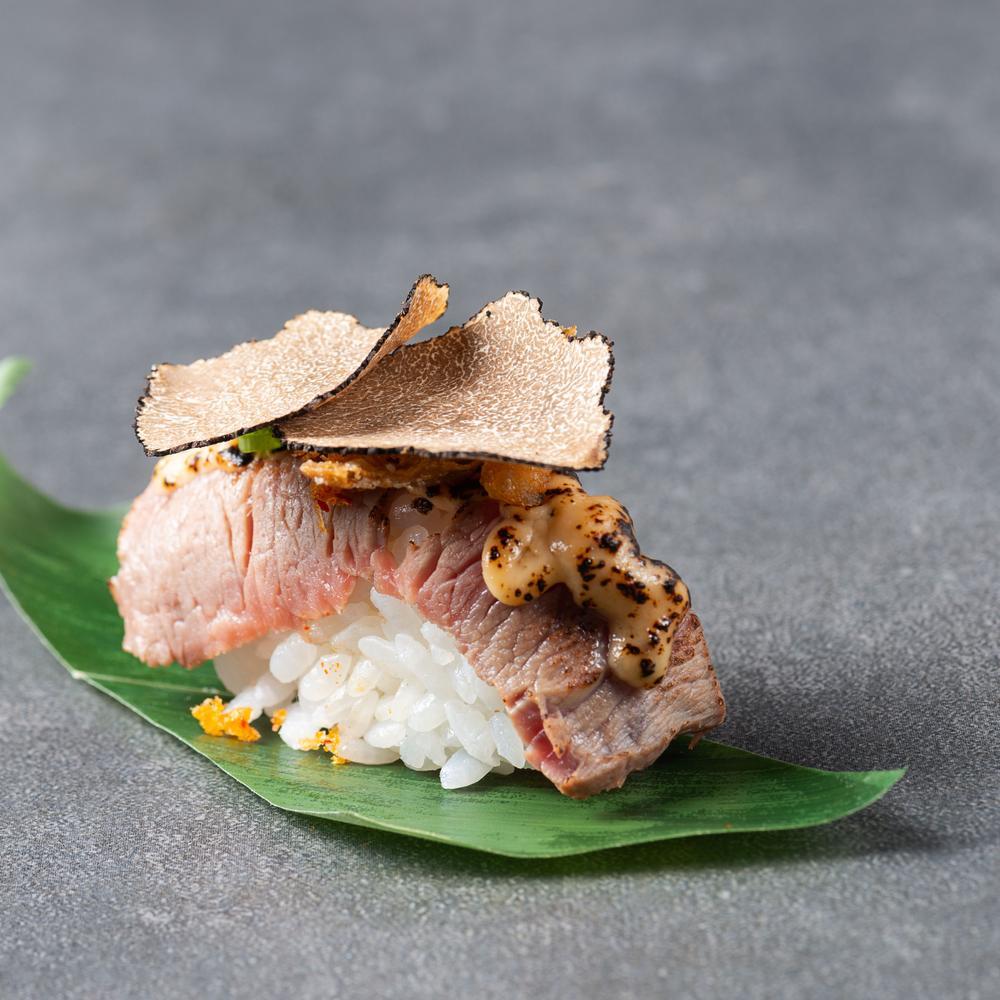 The selection of the MICHELIN Guide Istanbul 2023 at a glance

Michelin is delighted to present the 2023 selection of the MICHELIN Guide Belgrade. In this second edition, 3 new restaurants are recommended by the Guide, bringing to 17 the total number of establishments showcased by the inspectors in the Serbian capital.