Putting Indian cuisine on the world stage is a tall order. But chef Manish Mehrotra is up to the task, maintaining fine-dining award-winning Indian Accent restaurants in New Delhi, New York and London and promoting his country’s cuisine internationally. He cooked at the James Beard House in New York City, the Gourmet Summit in Singapore and at Millesime GNP 2019 in Mexico City. He also authored the beautifully-photographed Indian Accent Cookbook.

“Opening a fine-dining restaurant is very difficult, so I will concentrate on these three places,” he says, explaining that he has no immediate plans for another restaurant, “but a pop-up like I did in Mexico City is a very good opportunity to showcase your cuisine.” When we spoke, he had only recently returned from the Mexican gastronomic event where he cooked alongside a coterie of heavyweight chefs including Niall Keating of two-MICHELIN-starred The Dining Room at Whatley Manor in Malmesbury, England, and Kevin Meehan of one-MICHELIN-starred Kali in Los Angeles. “It was fantastic,“ he says. “We served 400 people every day for lunch.” He also received very good press there, earning comparisons to lauded Mexican chef Enrique Olvera’s efforts to shine the spotlight on his own home country’s cuisine. 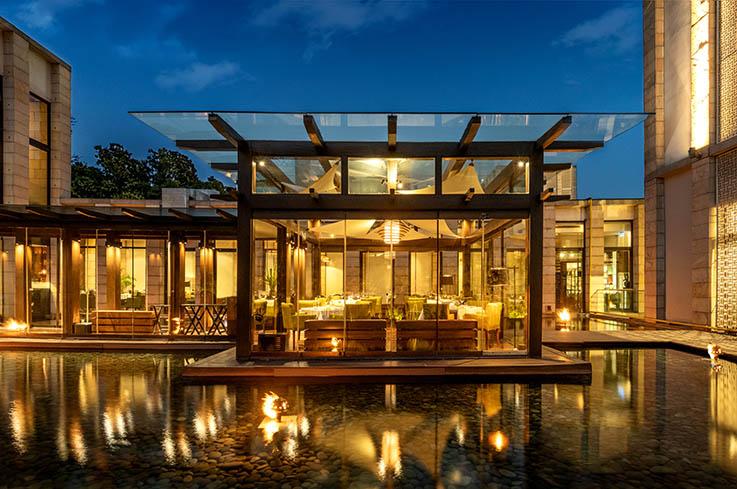 The glass house at Indian Accent at The Lodhi Hotel in New Delhi. (Photo by Rohit Chawla.)

Like the 35 chefs who now work for him in New Delhi, Mehrotra went to hotel school in India “where you study every part of the hotel including culinary,” he notes. Initially, he intended to pursue management but soon felt the magnetic pull of the kitchen. The rest is history. He trained in Pan Asian cuisine, traveled extensively in Asia and then worked in London for four years, “where I was exposed to all different types of cuisine. It was there I felt it was time that Indian food should also move forward and come out of the curry based kind of restaurant people know about.”

He points out that the curry houses originally popularized in London were run by people from Bangladesh, not India. “Chicken vindaloo, chicken madras—these are not things you will find on an Indian menu.”

The New Delhi Indian Accent (opened in 2009) is widely considered the best restaurant in India. The food is plated in contemporary Western restaurant-style and presented sequentially in a tasting menu. The chic, contemporary restaurant attracts a stylish international clientele.

Both front-of-house and back-of-house receive extensive training although Mehrotra says, “It’s not like I have to hold everybody’s hand. I have chefs who have been working with me for over 10 years and they help me in teaching farther down the line.” When he opened in London, he hired people there and flew them to India for three months of training. 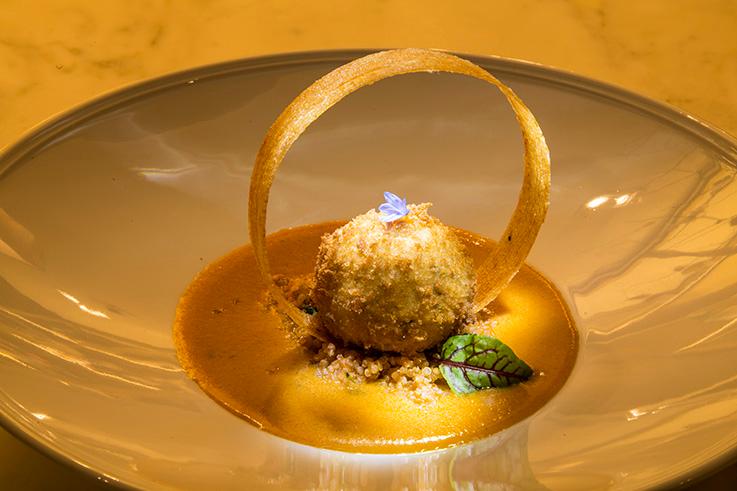 Mehrotra believes his take on Indian food is more relatable to people from outside India yet insists that the presentation “should not interfere with the taste and authentic flavors.” (Photo by Oleg March.)

Mehrotra believes his take on Indian food is more relatable to people from outside India yet insists that the presentation “should not interfere with the taste and authentic flavors.” At first, he admits Indian customers were taken aback by this kind of presentation but then “realized they were eating completely Indian food—only the presentation and the combinations are different.”

He’s particularly enthralled by makhan malai, a gossamer aerated saffron flavored milk dessert—his lightened version of a dessert that’s been traditional in India for some 150 years. “In New York, we top it with gold leaf, rose petals and apple blossoms.” It’s not as sweet as many Indian desserts and gives the impression of disappearing in your mouth.

Another favorite example is an Indian comfort food called dal moradabadi. “It’s made with split moong dal and is usually served at home when someone in the house is sick.” (An Indian answer to chicken soup?) “We make it with cloves, chiles, ginger and ghee and serve it with different chutneys, crispy lentils and micro greens.” His mother is from the small town of Moradabadi. He has nostalgic memories of eating this as a child when visiting his grandparents there, where the dish is a popular street food originally introduced in Mughal times.

Yet these dishes also bring a problem to mind. The words dal "moradabadi" or "makhan" malai do not easily roll off the English-speaking tongue.

India is a vast country with multiple regions all with their own culinary specialties and difficult to pronounce names. Often the same dish will be known by different names in different regions. And when it comes to how those foods are prepared, the possibilities seem endless. For example, every house has its own recipe for gunpowder spice or mango pickles. (Mehrotra uses his mother-in-law’s gunpowder spice recipe.)

And yet Mehrotra is not daunted by this encyclopedic bounty. He continues to travel and research, like a culinary anthropologist, visiting relatives in various parts of India and searching out dish after dish.

“There is still a lot of work to be done,” he admits. ”There is 5,000 years of history behind this cuisine.”

But he sees signs that things are changing. “Ten years back nobody knew about dosas, but now South Indian restaurants in San Francisco do fantastic dosas,” he says. And in New York as well. “Chinese food in New York and London has come a long way. And people understand and can find good Korean food.” Always the optimist, he concludes, “I believe Indian food will also come to that level.”