At Chilam Balam, a neighborhood Bib Gourmand in Lakeview with cornmeal-colored walls and an intimate, subterranean dining room, closeness is part of the charm. Since it opened in 2009, the restaurant has been serving a menu of Mexican small plates with a side of unwavering hospitality. Takeout was never a part of the business model until one fateful day in March.

Just eight week ago, in response to the Covid-19 pandemic, Governor Pritzker instructed all non-essential business in Chicago to close and for non-essential workers to shelter in place. Restaurants were classified as essential, ultimately forcing every restaurant owner to make a harrowing decision: stay open and focus all efforts on takeout or close for now (and possibly forever). For many, it was hardly a choice.

Soraya Rendon is the owner of Chilam Balam, and for her, pivoting to takeout was an act of desperation. “We had to go into defense mode really quickly,” Rendon said. As soon as dine-in business stopped, she was forced to lay off her entire staff except for three people — her head chef (Natalie Oswald), her brother, and herself. Even then, the small team is forfeiting salaries to redirect any incoming cash to bills. “We’re just trying to keep the lights on,” Oswald told me over the phone. “Hopefully we can still offer jobs when the time comes.”

The math didn’t add up for Troy Jorge either. He is the Executive Chef of Temporis in West Town, a 20-seat fine-dining restaurant that was awarded One MICHELIN Star in the 2019 Guide to Chicago after just one year of business. “Everyone thought we’d just collect unemployment and go back to work when this is all over,” he said. “But we realized if this thing lasts, we might not have a restaurant to go back to. The rent is due, and the bills are due, and insurance is due, but there’s no money coming in.”

Temporis is currently operating with nine people, including Jorge, which is a close approximation to the original staff size. As a relatively small and therefore nimble operation, the case to offer takeout was persuasive. Reformatting the tasting menu and repurposing roles and responsibilities would be marginally less complicated. As Sam Plotnick, the owner, told me via email, “The immediate reality is that restaurants are incredibly vulnerable to economic disruptions. Our goal was to fight to survive.” 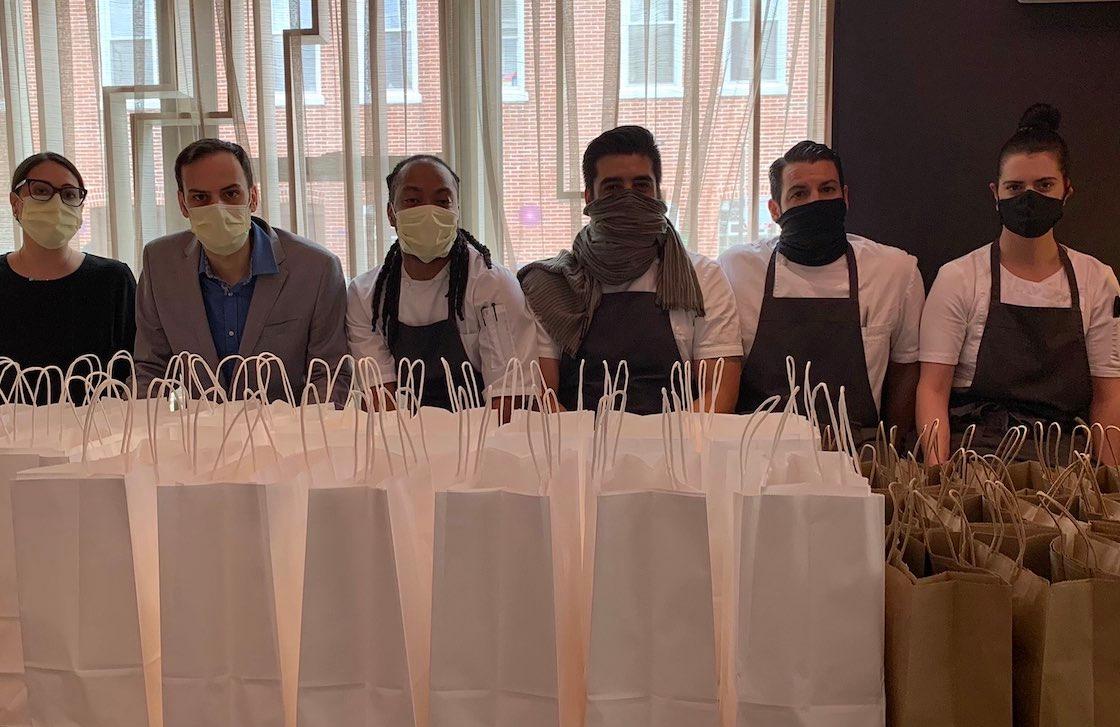 The owner of Temporis, Sam Plotnick (second to left), sees takeout as an opportunity to extend the same hospitality to guests, just in a different form. Photo courtesy of Temporis Restaurant.

One complicating variable in the decision to stay open is the weight of intangibles like personal safety. Is keeping the doors open going to be counterproductive to public health? As Beverly Kim, the chef/co-owner of One MICHELIN-Starred Parachute restaurant put it, “It's a moral dilemma. I can understand why a lot of people don't want to take the risk. Everyone is just trying to figure out what's best for themselves.”

Kim opened Parachute, a contemporary Korean restaurant, with her husband and co-chef Johnny Clark in 2014. Just last year, the couple opened their second restaurant, an American bistro called Wherewithall. They also recently celebrated the birth of their third child, an added consideration for Kim who now sacrifices her time at home with her kids in order to keep her business afloat. "There is no silver lining," she said, referring to the newfound abundance of family time some parents are experiencing.

Ultimately, these three businesses chose to stay open because implementing proper social distancing and enforcing sanitation with a handful of employees seemed doable. The rewards outweighed the risk. And yet, none of these businesses had experience with takeout so the transition had to happen practically overnight.

The first consideration is the menu, which has to capture the personality and skill of the kitchen but also travel well. For dine-in only restaurants, this requires an entirely different way of planning, purchasing, and prep. “We had to come up with a totally different menu that was still the highest quality and something that people are going to want to eat every night,” said Jorge. Takeout from Temporis has included braised short rib with jasmine coconut fried rice for two, or a wagyu burger.

Chilam Balam and Parachute offer similarly comforting menus of large-format meals, a departure from their individually portioned servings cooked a la minute. At Chilam Balam, Oswald prepares family-style servings of chicken Milanesa or tamales draped in mole. At Parachute, Kim and her team provide a family meal for two which has featured easy-to-love dishes like spicy Korean fried chicken and yukgaejang, a spicy beef stew. Every meal comes with an order of bing bread — the restaurant’s coveted flaky, scallion bread. 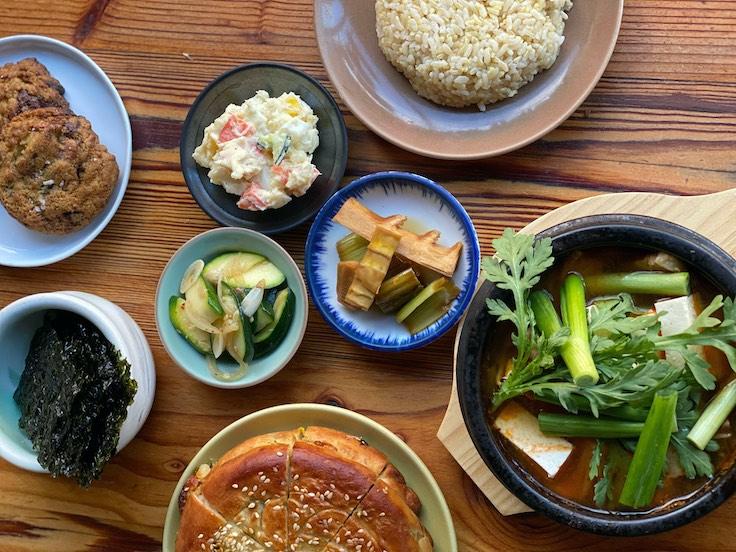 The takeout menu at Parachute is formatted for a family meal, and comes with a round of signature bing bread. Photo courtesy of Parachute Restaurant.

For customers, these are new and exciting ways to experience a favorite restaurant. Keeping people informed and staying top-of-mind, though incredibly time-consuming, is as crucial as the cooking itself. All three restaurants agreed that staying active on Instagram has been a lifeline and also a new way to engage with guests. “They tag us just to show how they share the menu with their family,” Oswald said. It’s a bittersweet record of these tough times.

Restaurants have always been at the mercy of seasonal trends, but extreme unpredictability is the new normal. Good news encourages spending while a gloomy outlook tends to have the opposite effect. These days, the news cycle can bounce back and forth several times a week. Recent supply inconsistencies exacerbate the issue — distributors are cutting back on hours and inventory is limited. Fortunately, each of these restaurants was already in the habit of changing their menus regularly. Daily modifications are manageable and keep things fresh for customers.

Dealing with the logistics of takeout, on the other hand, has been an adjustment. Getting onto platforms like Tock (founded by Chicago-based restaurateur Nick Kokonas) has helped while third-party delivery fees on other platforms are cutting into nonexistent margins and seemingly capitalizing on the crisis. Chicago has proposed a five percent cap on such fees, but a decision on the bill is pending. At Chilam Balam, which mostly serves the immediate community and is not on Tock, most customers call the restaurant directly for pickup, helping Rendon avoid the issue altogether.

Of the three restaurants, only Kim has received financial assistance from the government. (Kim and Clark own the building that houses Parachute and they received an advance from the Small Business Association). She is reluctant to touch it for fear of activating the repayment terms and adding to her existing liabilities. At Chilam Balam, Rendon is still waiting for an update on her PPP application, but even she doesn’t think it will be helpful if it does come through. To avoid repayment, she would have to use the loan to pay a staff she can’t hire. “Not that we don’t want to bring our employees back, we just cannot because we don’t have the same amount of needs,” she said. 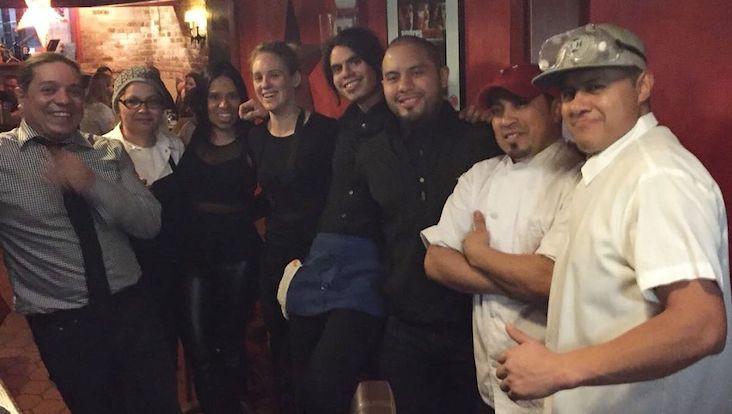 Soraya Rendon (third from left) had to release most of her staff when restaurants were ordered to stop dine-in service. Photo courtesy of Chilam Balam Restaurant.

There is a subtle irony to these circumstances. As Kim pointed out, “A year ago, the theme was we don't have enough cooks. Now, there are too many restaurants.” The precarious standing of restaurants, and the people who work in them, has been an industry talking point for a while now. Pre-pandemic, many struggled to price their menus appropriately (fearing a loss of business from cost-sensitive customers) while rent and taxes were ballooning. The fault lines are fully exposed now, and the business owners I spoke to are aching to deal with the broken system.

While everyone is focused on the immediacy of fulfilling takeout orders, there is a sense of dread when discussing the future. Takeout alone is not financially viable. Burnout will become more widespread; physical and emotional stress will begin to take its toll. And fixed overhead costs will climb into insurmountable debt. It’s a grim reality, but a significant number of restaurants will be lost. Some estimates claim that 20% of restaurants nation-wide will close permanently.

The forecast includes restaurants at both ends of the price spectrum. All independently-owned restaurants, from neighborhood staples to occasion-worthy fine-dining, are at risk. According to Plotnick, Temporis can still emerge from this as long as they continue to receive the same level of support as the past few weeks. Kim sees a long, hard road ahead, but there is hope for her restaurants as well. Both establishments have licenses to sell alcohol — perhaps the only profit-making endeavor in running a restaurant.

Rendon, who does not have a liquor license, is less optimistic. Even if she can open her doors to guests in the near future, Chilam Balam’s cozy, 45-seat dining room doesn’t hold up well to social distancing measures. Takeout will have to be a permanent feature if she hopes to stay open. The same is probably true for any restaurant that sees its capacity capped at 50% or even 75%; there are countless implications for how restaurants will operate. It’s impossible to know what the near future looks like for sure, but if one thing is clear, as Rendon put it, “it’s definitely not going to be the same as before.”