When Himitsu, the Washington, D.C.-based Japanese restaurant, made Bon Appétit's 50 Best Restaurants in America list in 2017, it was huge for them. "I'm ecstatic, I'm over the moon," says Kevin Tien, as he remembers what it was like to receive the news, but there was one caveat. "At the same time it talked about how amazing everything was, [one] sentence said [something along the lines of], 'If you're looking for something safer, have the sushi.'" By the end of the next week sushi was gone from the menu.

In the small, 22-seat restaurant in the rapidly gentrifying neighborhood of Petworth, chef/co-owner Tien and his partner/beverage director Carlie Steiner aren't looking to play it safe. This isn't to say that the food isn't thoughtfully composed, or that care isn't placed in how the wine is selected or how the drinks are crafted—it's just that their own histories aren't defined by trying to take the safest road available to them, and that's reflected on their menu. 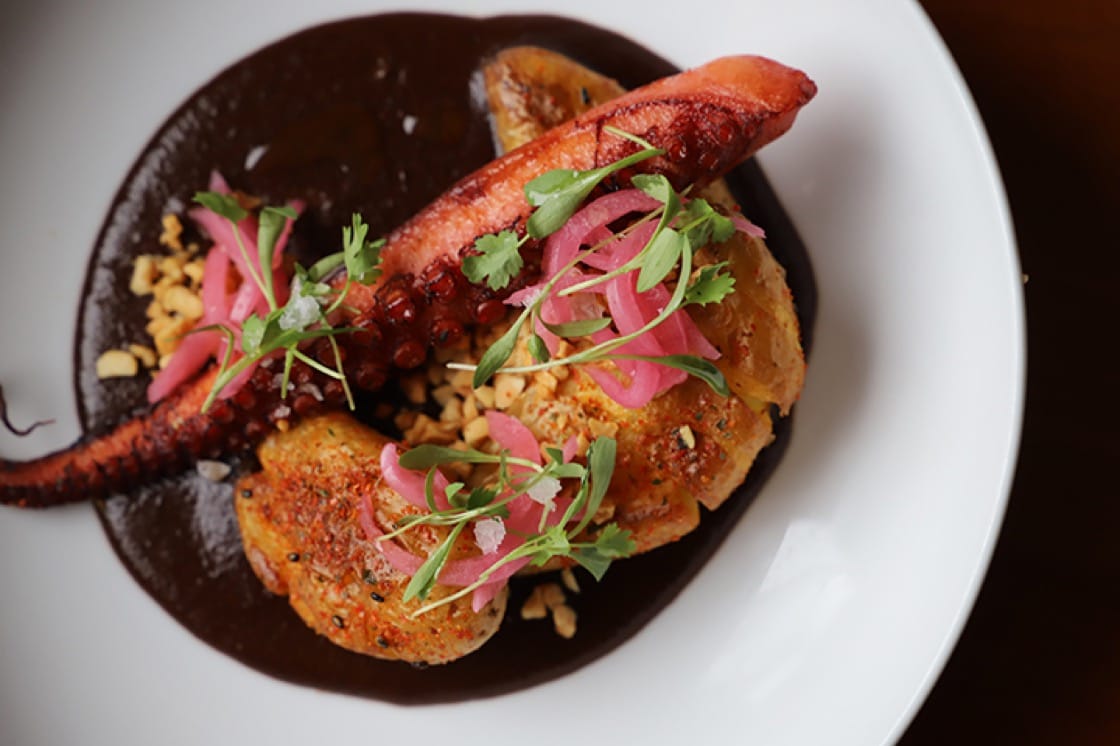 "I always tell everyone this restaurant is a representation of all of myself on the food side, and all of Carlie and herself on the beverage side," Tien says. Looking over the menu for the evening, he explains how the akami (tuna) crudo—crudos are now featured on the menu as the raw fish option instead of sushi—is flavored with coconut milk, lime, peanuts and Thai chile, a combination that reflects his Vietnamese heritage. Similarly, a dish of tako (octopus) harkens back to the time he and Steiner spent working at Oyamel. The tender octopus is charred and served with a fermented black bean mole, crispy potatoes, peanuts, pickled onion, herbs and garlic. It's anything but conventional for a dish at a Japanese restaurant.

Hidden layers of meaning and remembrance are a big part of the menu at Himitsu, which changes frequently in response to both the availability of ingredients and random flashes of inspiration. Tien ascribes his tendency toward change as a consequence of a childhood spent as an army brat. While his family is originally from Ho Chi Minh City in Vietnam, they left the country after the end of the Vietnam War and settled in Galveston, Texas. From there the family moved regularly as a result of his father's army service, and over the course of his childhood Tien lived in Hawaii, Washington state, California and Louisiana. "That's why I like so much change, because I grew up with a lot of [it]," he reflects. 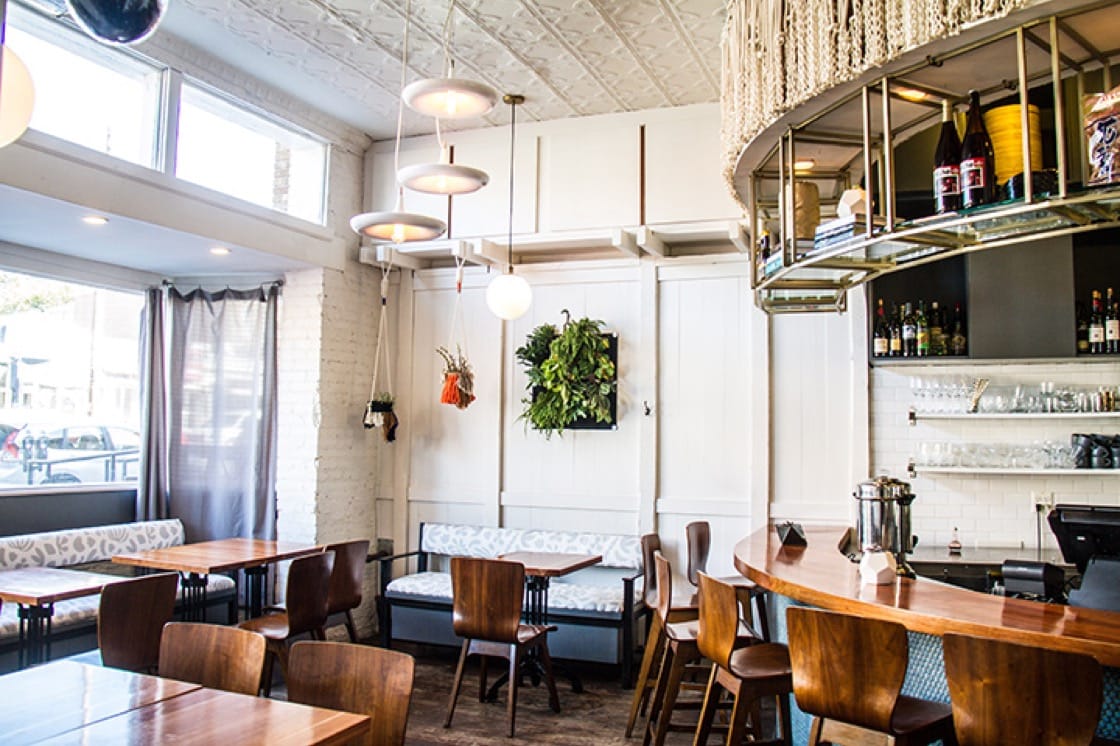 Tien has benefitted from his ability to roll with the punches. Shortly after he began classes at the University of New Orleans—where he was on a full ride scholarship—the city was hit by Hurricane Katrina and the school closed due to the resulting devastation. He transferred to Louisiana State University in Baton Rouge and earned a bachelor of arts in finance, and later a master's degree in statistical analysis.

While in school he found support, and a job, from a family running a chain of Japanese restaurants called Tsunami. Tien had worked for the Lafayette location while he was a high school student, and at university, the family again offered him a job and made sure he had enough money to cover his rent and a schedule that worked with his classes. "They hired this 17-year-old kid who'd never really been in the kitchen before and they taught me how to work in a restaurant all the way until I graduated from college in 2012." Since then, Tien has accrued a number of accolades, and inspectors state, "Perhaps it should come as no surprise that it has garnered so much buzz as it is exceedingly more fun than your average spot."

Steiner, like Tien, fell in love with the restaurant business during her teenage years. During her senior year of high school she began taking culinary classes through a vocational school and went on to graduate from the Culinary Institute of America. She later staged at Blackbird in Chicago, Prune in New York and at the now-shuttered Rogue 24 in D.C. Afterwards, "I jokingly applied for a position at barmini/minibar," which at the time was housed inside of Cafe Atlantico. She didn't expect to get called in, but when they opened their stand-alone location and asked to interview her, "I immediately fell in love. I was the first and only bartender that they hired at barmini." She later transitioned to José Andrés' Oyamel, where she first crossed paths with Tien, who worked at the ceviche station. 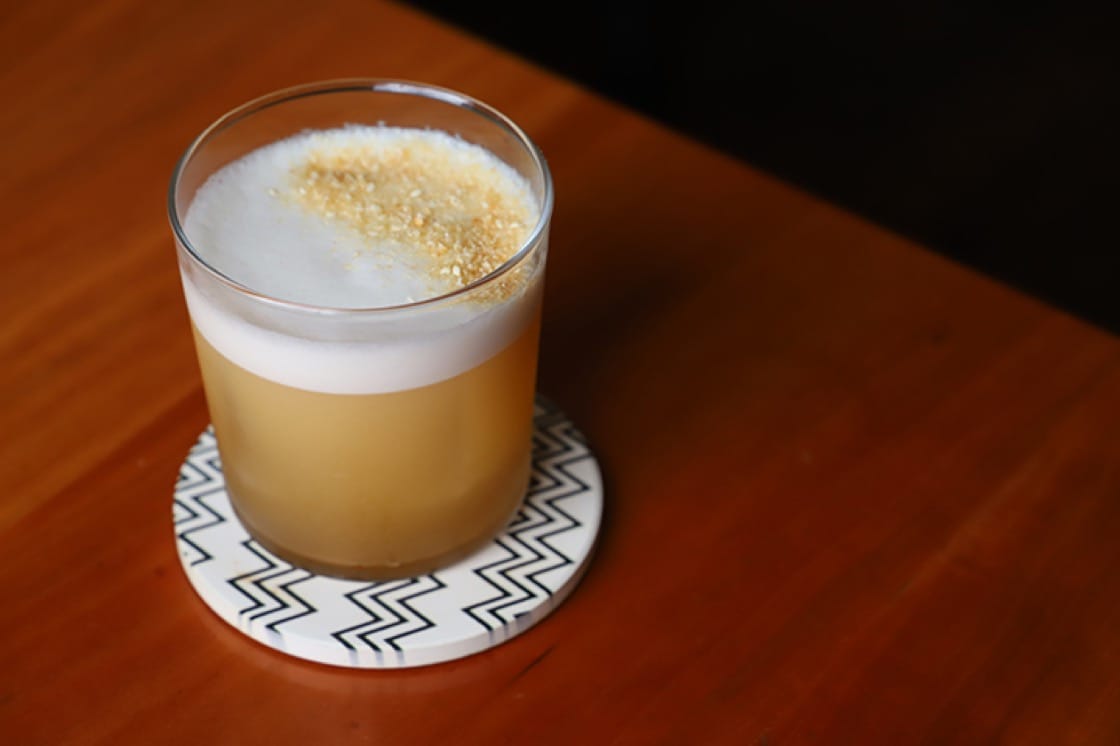 At Himitsu, Steiner implements the training and creativity she learned at minibar and across her culinary career. The "Curated Cocktails" section of the drinks menu takes into account the flavors of the food, but also invokes her own interests and passions. Libations like the off-menu "coco de mizu" include ingredients such as gin, coconut water, yuzu and Thai basil, which mimics ingredients found in Tien's dishes. Simultaneously, Steiner ropes in the spirits and ingredients she personally loves. This is evident in her frequent use of sherry, which she says "goes from bone dry [and] salty to nutty and umami-filled, to sweet and viscous, and dried-fruity. It's incredibly versatile and it pairs with everything, but its specialties are spicy foods and most Asian inspired foods."

The wine menu shows the same level of consideration. Steiner and Tien say that at any given time the majority of the wines they carry are female-produced. The entire wine list is also either natural, organic or biodynamic. Steiner even directly imports some wines herself, such as the 1750 Syrah, which comes from Samaipata, Bolivia.

Together, Steiner and Tien have found a way to blend their own desires to move and change with a menu that's of both Japan and the wider world. "Everyone's so focused on trying to be a certain way with a restaurant," says Tien. "For me, I'm Vietnamese but I've never been to Vietnam. My first twelve years of cooking I've only done Japanese food, but I've never been to Japan. It's me as an Asian-American. I'm not here or there—this was my experience growing up. My food is very representative of me as a first-generation American."

We follow 14 chefs and food industry insiders as they embark on an eye-opening trip to Hokkaido's Tokachi region to discover its wide variety of produce.