Whether you're up for a boisterous evening of yakitori in an izakaya or a tranquil omakase at a sushi counter, Chicago's best Japanese restaurants have you covered. 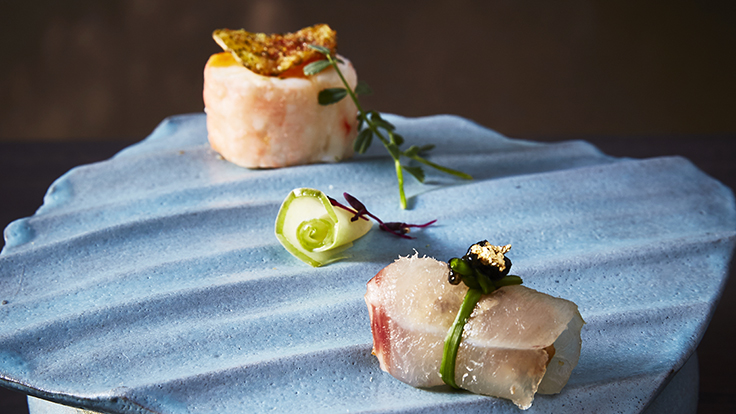 Creatively adorned, Americanized nigiri is the featured attraction at this hip sushi-ya that’s all wood planks, stainless steel, chunky tables, and hefty benches. Why just have one piece when you can have two? Here, each order is served in pairs. Among the selection, enjoy the likes of hamachi sporting a spicy mix of shredded Napa cabbage, daikon, and red chili; or salmon dressed with a sweet ginger-soy sauce and fried ginger chips.

Mako is a hot ticket, with just 22 seats in which to savor the smartly considered omakase, featuring black sea bream wrapped around ankimo; pickled chayote crowned with a micro fava leaf; Osetra caviar; as well as king crab with uni miso, A5 Wagyu butter, and a potato chip. Equally enticing are its seasonal sushi and cooked dishes, like poached abalone braised with soy sauce and finished with just the right brush of XO sauce; as well as sea bass with charred frisée and seaweed.

Gaijin is Paul Virant's love letter to okonomiyaki. Okonomi in Japanese means "what you like” and, accordingly, guests here are encouraged to choose their own course. Thanks to his time in Japan, the chef displays ace skills and experience. Osaka and Hiroshima are the main styles on his menu, which also flaunts a custom brew from Moody Tongue. While Tuesdays bring a tonkatsu feast, steamed rice with furikake, miso soup, and tsukemono are eternal hits. Desserts, like shirokuma with pineapple-buttermilk sherbet and coconut syrup, are worth the splurge.

Momotaro (Fulton Market)
Consistently packed, this impeccably designed space boasts numerous kitchens churning out a range of dishes.
Jidori kimo, those prized chicken oysters—here grilled to perfection—has long been a signature, while the beef tsukune sliders in a bao from the robata-yaki are equally impressive. Don't miss the delicious nigiri or maki, including una-kyu or the ebi uni maguro, of which there are only ten per evening, so plan ahead. 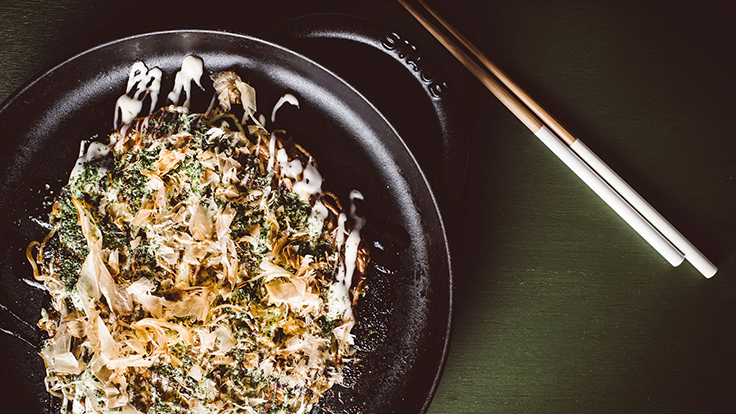 TenGoku is a take on izakaya food by the talented Chef Sangtae Park. In Japan it's most rare to land upon a restaurant that serves it all, but this team certainly bucks that trend. Of course, it helps that the informal space was conceived solely with pub grub in mind. There is something for everyone on this ample and versatile carte. From tako yaki (octopus fritters with unagi-teriyaki sauce) and assorted maki, to a bowl of heartwarming udon and maze soba with ground pork, fish flakes, and egg, this kitchen delivers to your heart's content.

The subtleties behind Yume's entrance—marked by a basic black awning—along with its particularly skillful preparations allow it to stand tall and loom large over its more extravagant competitors. Savor the chef's unfaltering focus on Japanese cuisine by way of deep-fried nasu hirame; Edo-style sushi featuring madai, akami, and chutoro; as well as slices of Wagyu beef poised atop sushi rice, brushed with soy, and finished with grated wasabi. Sweet and custardy tamago, followed by matcha panna cotta—deeply colorful, full-bodied and tart with creamy buttermilk—bring the meal to a close. 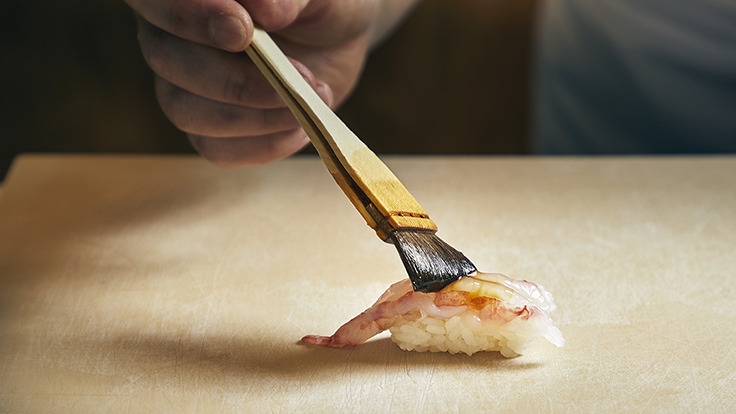 The menu has a handful of small plates, including delicacies like juicy chicken meatball skewers with a pepper-soy glaze, but the main attraction is their wide variety of sushi. Traditional options appear alongside more creative signature takes, and Chef B.K. Park's deft touch with seafood can be seen in both. Specialties include the Juno Queen, a nigiri featuring salmon and spicy scallop with potato crunch.

Start with single-serve sake in a jar so cute you’ll want to smuggle it home, or a cocktail inspired by Japanese literature (the Norwegian Wood, a delicious interpretation of the Haruki Murakami novel, blends whiskey, Luxardo, sweet vermouth and orange bitters). The array of small plates brims with creativity and flavor: tsukune are coarse-ground, delightfully chewy and achieve a mouthwateringly charred exterior from having been grilled over binchotan; while tako-yaki are as delicious as any found on a Tokyo street cart.

Who says comfort food must be consumed in humdrum digs? Certainly not Wasabi, where globe lights, sleek booths and towering windows exude modern mid-century sophistication. Tonkatsu, shoyu, and garlic miso broths bob with springy noodles and ace ingredients, such as pork belly, a six-minute egg, wood ear mushrooms and marinated bamboo shoots. Ramen is a highlight, but it’s not the only option. Pick from a host of others like pork belly buns, dumplings and rice bowls piled with panko-crusted Berkshire pork, thinly sliced Wagyu or salmon. 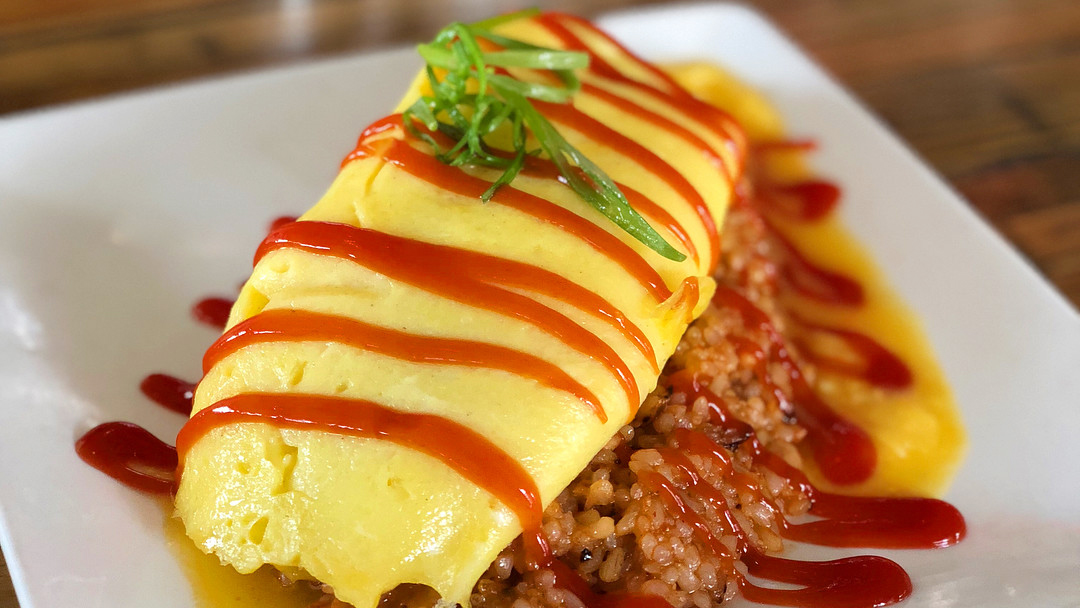 Kick things off with a spicy tako maguro maki filled with octopus, tuna, eel sauce, and chili oil; or marinated tuna-wrapped zuke maguro kani. Shishito peppers lend that delicious bit of crunch to a small plate of katsuobushi and ponzu, not unlike those miso-graham cracker crumbles that garnish coconut- cinnamon- and banana-flavored ice cream.

Kai Zan (West Town)
Savvy diners book a seat at the marble sushi counter to watch chefs and twin brothers Melvin and Carlo Vizconde perform their magic up close. The brothers turn out sophisticated, creative dishes that are decked with myriad sauces, flavors and textures. Non-traditional sushi, nigiri, yakitori, as well as classic bar bites like takoyaki and karaage are all crafted with precise details and impeccable ingredients. 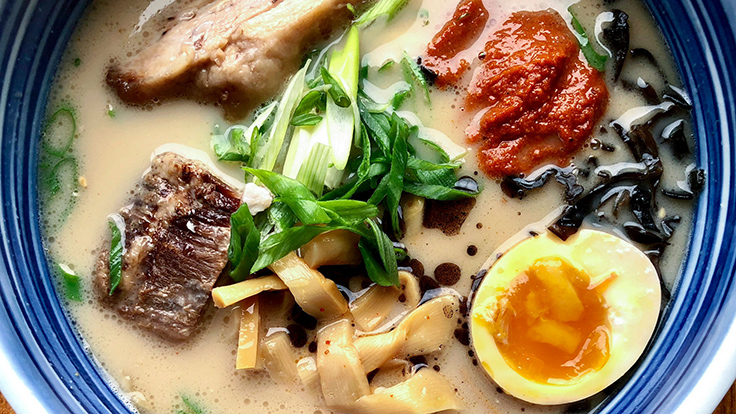