These chefs are flexing their creative muscles and pushing boundaries on formal dining with menus that go beyond farm-to-table.

The release of a new guide often bids an opportunity to discover a new chef, especially since this year’s edition welcomed four new starred restaurants. However, there’s a pretty good chance you already knew the dynamic duo behind 80/20 and culinary maestro of Table 38 before they took the MICHELIN Star Revelation stage last month.

Saki Hoshino and Napol (Joe) Jantraget‘s 80/20 have been a darling of Bangkok’s creative culinary scene since opening in 2015. The duo was one of the first in the city to play with the idea of nouveau Thai fare, encouraging diners to simultaneously respect traditional flavours while opening their minds to new ingredients and reinterpretations. 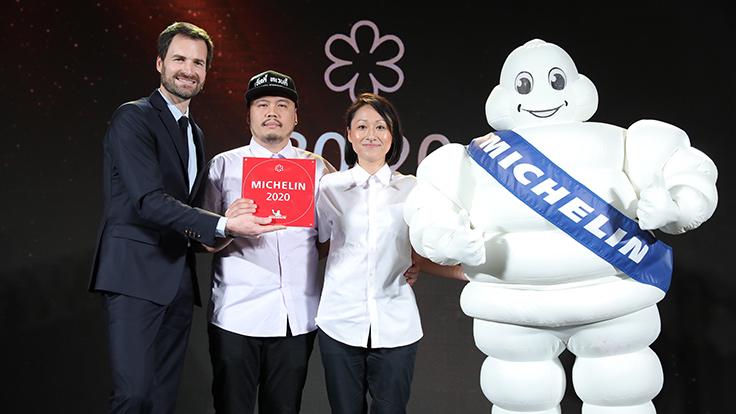 Critically-acclaimed chefs of 80/20 with Gwendal Poullennec, International Director of the MICHELIN Guides.

Chef Andy Yang’s restaurant Rhong Tiam in New York City earned one MICHELIN star in 2010, on top of a favourable review from the New York Times. In Bangkok, his head—donning his signature backwards cap—is the logo for Eat Pad Thai (Bib Gourmand), his street food-style Pad Thai shop. But you’d probably recognise him as the chef of Table 38, his Sukhumvit restaurant which is street food in thought, but chef’s table in concept.

Though completely different in style, background and taste, both 80/20 and Table 38 have a palpable respect for Thai food and a mutual goal of educating the population of the potential of their native cuisine. We sat down with the three chefs to talk MICHELIN stars, future plans, and where you may find them eating on a day off. 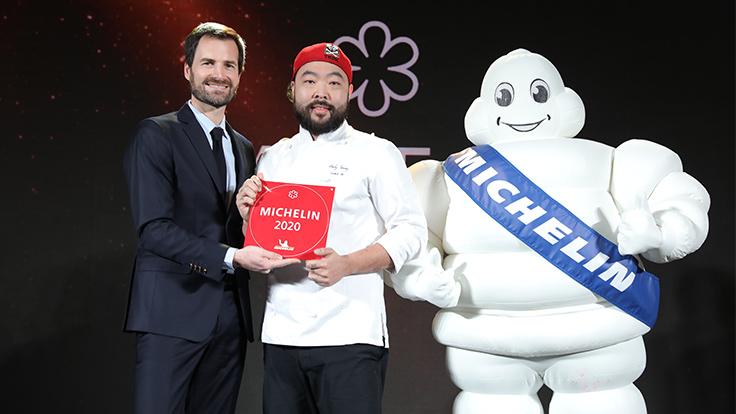 Honestly, were you expecting to receive a star?
Chef Joe: In a way, yes. It’s been a goal that we’ve been wanting to achieve and something our team and everyone backing 80/20 has been working incredibly hard for.

Chef Saki: Were we expecting a star? I’d say it’s more like we were hoping for one! We were told to join the event today but didn’t want to react prematurely and be disappointed in the end.

Chef Andy: Actually, yeah. I was hoping for a star—reaching and dreaming for a star. Every chef’s dream is to receive one. A star acts as a platform for chefs to shout louder and share their food with more people. Next year? We’re shooting for more.

Both 80/20 and Table 38 both have a modern interpretation of Thai cuisine. How are your cooking philosophies different from each other?
Chef Joe: We try to play with new techniques in order to bring out the utmost flavour of lesser-known local ingredients. We want to promote and highlight the products that people—especially Thais— aren’t familiar with. I think that Thai food has gone through a sort of cycle where we are using the same types of ingredients—lemongrass, galangal, chillis—in every dish. But there is so much more on offer that most of the population doesn’t know about. We’ve been doing this for four years and haven’t even covered 10% of what’s out there.

Chef Andy: I am trying to preserve and highlight the medicinal properties of traditional Thai dishes, to keep it short. We use Thai street food to show people that a simple, common dish— think moo ping, gaeng phed, gaeng kiew waan—can hold more nutritious and medicinal value than you can ever imagine. There’s a lot more to it, but I’d suggest people come to Table 38 to find out for themselves. 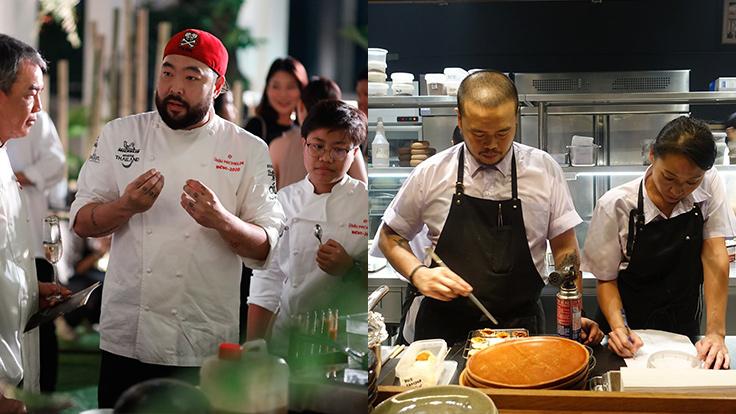 Hyper-local, foraged ingredients done in a refined way. Is this the new standard for fine Thai restaurants in Bangkok?
Chef Joe: Many young chefs try to use impressive modern techniques but for me, it’s all about the purpose of why you are using those techniques and those ingredients. No matter what, it needs to make sense and should stay true to who you are as a chef.

Chef Saki: This movement is also really good for the farmers. In the past, chefs used Thai ingredients because they were cheap, but now it seems like more people are really seeing the beauty in these local products and helping lift up the people producing them.

Chef Andy: AMEN. I second what Saki and Joe had to say. But I’ll add that, at the end of the day, all chefs have the same purpose: to bring out the best of the ingredients they use. Table 38’s motto is “Using today’s knowledge to tell yesterday’s story.” We are not trying to twist the narrative, we are simply using modern-day tools to bring the story of the past to life. Thai cuisine of many forms is deep-seated in heritage. Yes, sometimes dishes are cheap, but that’s not how it should be defined. Follow a grain of rice from the farm to the plate and you’d be astounded at the amount of time, energy and effort that has been put into it. So, our job is to bring out the best of the ingredient as a form of respect. 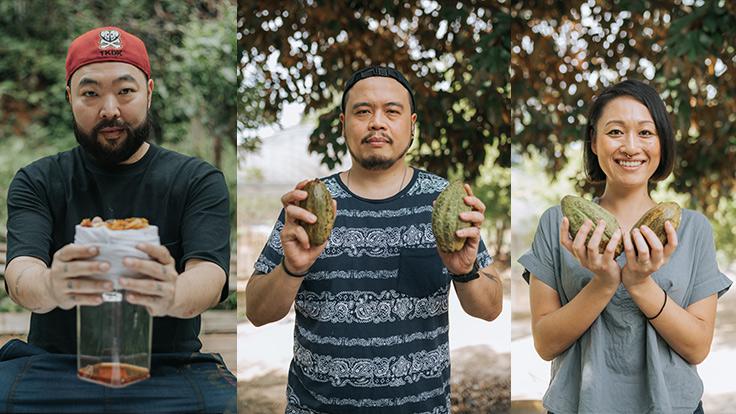 The three Thai chefs are part of a generation of culinary experts who support local produce.

Saki and Joe, 80/20 was listed as a MICHELIN Plate in the 2018 guide and after considerable renovations, you managed to convert into a one MICHELIN Star restaurant. What changed?
Chef Joe: For one, our kitchen is much bigger, which means we have more space to play around in. But we still hold on to the same philosophy of promoting Thai ingredients as we have from the start, but now we are paying even closer attention to those ingredients and the meticulous details of how we turn them into dishes.

Chef Saki: We are really lucky to have such a great team. They trust us and believe in us. We all align with our goals and visions and, really, that’s how we are able to succeed.

What are your plans for the next 12 months?
Chef Andy: My plans? Keep working for double stars! Aside from that, I am launching a few new projects, one of which is called Wonder Pig & Farmer’s Rice. The idea behind it is to give every Thai chef access to affordable, clean and healthy ingredients. It’s really every chef’s dream to lower costs and give everyone—not only those who can afford it— access to more quality food.

Chef Joe: Keep learning! Saki and I never stop critiquing our own work. These self-evaluations turn into motivation and reminders to keep improving. Like chef Andy, we also want to prove to the world that good food and good ingredients don’t only have to come in the form of fine-dining. So we may, or may not, be coming up with a project that explores this idea. 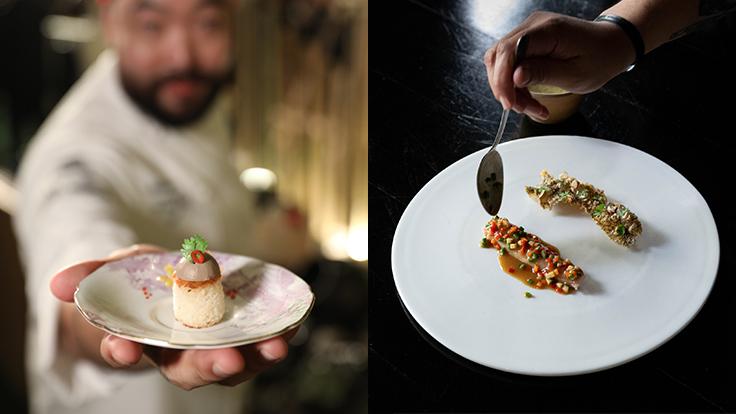 What are the culinary trends you foresee taking over the restaurant scene in Thailand?
Chef Joe: I think, and hope, that more chefs will focus less on fine dining and get back to the basics a bit with medium-to-low price point concepts that are simple, unpretentious and delicious.

Chef Saki: I think we’ll see chefs focusing on regional cuisines with even more locality than what already exists.

Chef Andy: I agree with chef Saki. We’ll be seeing the flavours of each region being painted brighter and bolder. Dishes will be more sustainable and directly connected to the farmers. In general, I think people are increasingly more concerned about eating fresher, healthier ingredients.

Finally, where are your favourite places to eat in Bangkok?
Chef Joe: Sorn (2 MICHELIN Stars). I’ve been there twice and it improves every time. That team truly deserves their two stars! And, of course, street food. There are a million places, but one of my go-to’s is a duck noodle shop in Talad Noi.

Chef Saki: We also love local restaurants. 100 Mahaseth (Bib Gourmand) is a dependable favourite. It’s spicy but we crave it!

Chef Joe: It’s about chef Chalee, too. He has dedicated himself to working with beef farmers in the north and is highly educated in Thai ingredients and cuisine. We hope to see him on stage at next year’s MICHELIN revelation.

Chef Andy: Every time I have a visitor from out of town I take them to 100 Mahaseth (Bib Gourmand). It’s just zaep (awesome)! Then, of course, Sorn (2 MICHELIN Stars). To be honest, the first time I went I was a bit skeptical just because it had been so hyped by everyone around me. But the meal gave me chills. Every single detail was accounted for, from the way certain cutlery is paired with certain dishes to how different layers of flavour are achieved. As for street food, there’s a rad na spot called Sink Kee near the old prison that I love. The shop owner used to be a lawyer and displays his BAR card on the wall.