Use Your Noodle: A Primer On Thai Noodles

You can find noodles everywhere in Thailand, and for the novice, the choices can be dizzying – cooked in stir-fries and soups, made from wheat and rice, and accompanied by seemingly infinite toppings. Here is a helpful Thai Noodles 101, and don't worry, the homework will be delicious.

Surprisingly, to some, noodles were a late entry into Thailand’s food culture. Rice had long been the staple starch until the increased Chinese presence during the Ayutthaya Period in the 17th and 18th centuries saw noodles taking a more significant role in Thai dishes. As urbanisation increased, the popularity of noodles increased as well, as they provided a quick, tasty, efficient, and inexpensive means of feeding the working class. Now, there is hardly a village in Thailand without at least a couple of noodle stands.

Thai noodles come in a few basic varieties. First, and probably most commonly, are rice noodles, which are subdivided by size. Sen yai are wide and flat, and while they are frequently used in soups, they shine in stir-fry dishes, where their ability to stick to the wok and pick up flavour is second to none. Next down are sen lek, similar in size to linguine and equally at home in soups and stir fries. The thinnest are sen mee, with a fine texture that provides an excellent conduit for delivering the flavour of strong broths.

Other rice noodle varieties include kuay chap, an extra-thick, chewy noodle, and khanom chin, a spaghetti-like noodle that originates from the Mon people in the Thai-Myanmar borderlands. More on both later.

In addition to rice noodles, there is starchy bami, made from wheat, much like Chinese egg noodles, and wun sen, a light and chewy cellophane noodle made from mung bean starch. And we can’t forget the ubiquitous instant noodles (often called “Mama” after the brand name, a bit like Americans calling tissues “Kleenex”) that have made their way into street food dishes as well as simply functioning as a cheap meal on the go. 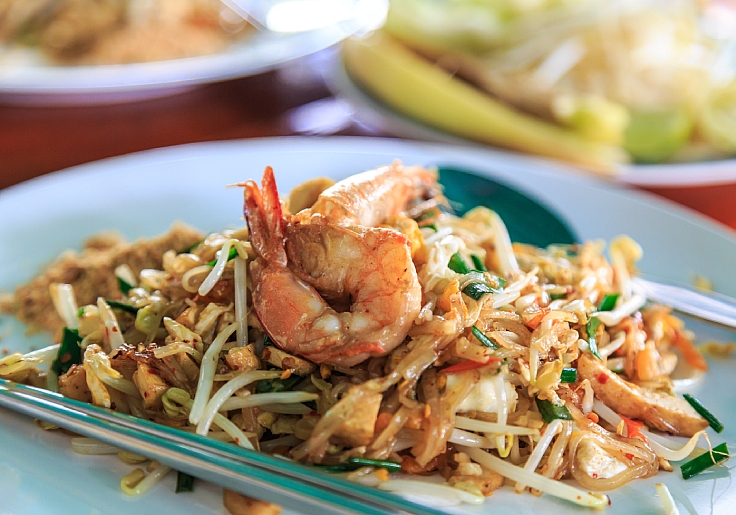 For many around the world, phad thai is their first introduction to Thai food. After all, “Thai” is in the name. Translated to “fried Thai [noodles]”, Prime Minister Plaek Phibunsongkhram developed and promoted phad thai as a national dish after the 1932 Revolution, not only as part of creating and solidifying a unique Thai identity, but also as a way to save dwindling rice stores. The amount of rice needed to make one serving could make a greater quantity of rice noodles and was ideally suited to be paired with a piquant tamarind sauce, peanuts, vegetables, eggs, and often prawns. Indeed, it has become a representative Thai dish internationally, but many visitors are surprised to find that while phad thai is certainly available, it is nowhere near the most popular noodle dish locally. Nevertheless, it remains a Thai classic. 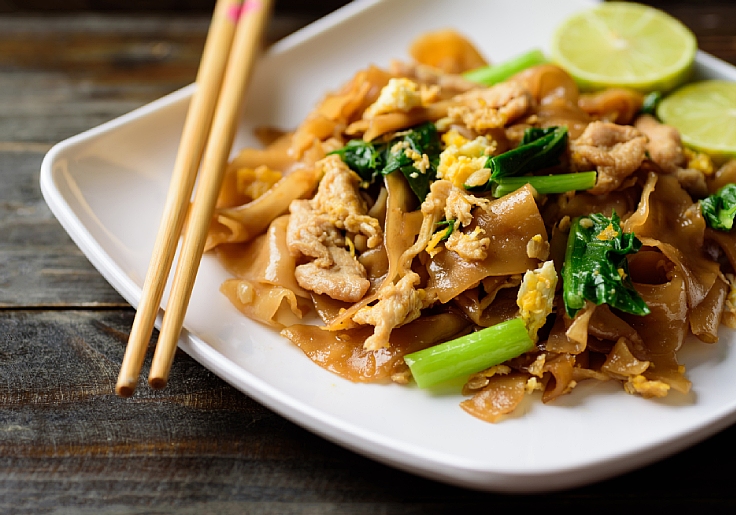 These two dishes are closely related, as both feature similar flavour profiles, and shops that serve one almost always serve the other as well. They start with lightly stir-frying noodles, usually sen yai, in dark soy sauce to complement the rest to come. Phad see iw highlights stir-frying the ingredients to pick up the char and aroma of the hot wok that the Chinese call wok hei, with a choice of protein along with Chinese kale for bitterness and texture. Meanwhile, rat na takes things a step further by creating a thick gravy with similar ingredients, giving the dish an almost soupy consistency.

Where to get it: Sanyod (Sathon-Bang Rak) (Bib Gourmand, MICHELIN Guide Thailand 2022) 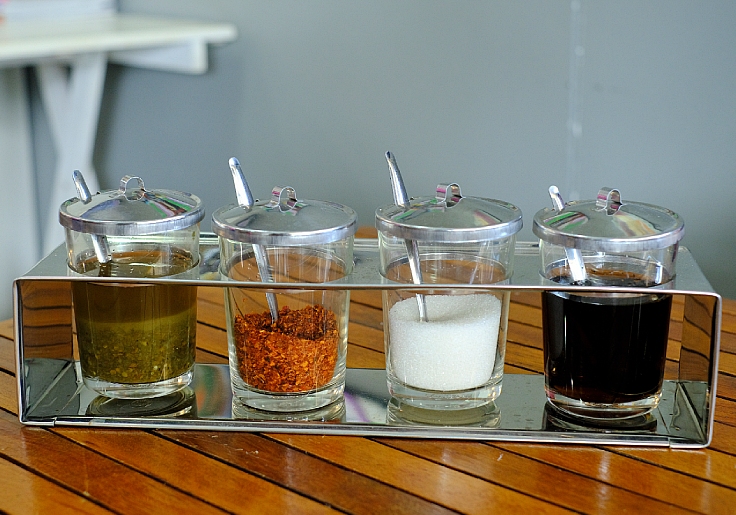 Condiments at a noodle shop. (© Shutterstock)

Kuaytiaw means “noodles”, but this name is deceivingly simple. A kuaytiaw shop is likely to offer a baffling array for you to mix and match. Start with noodles: sen yai, sen lek, sen mee, bami, and maybe more. Then, choose either nam (soup) or haeng (dry). Protein choices can be far from simple. Beef, pork, fish, crab, and chicken may be on offer in various forms -- boiled or barbequed slices, braised chunks, or meatballs -- and in different combinations. Offal and end-meat (tendons, ligaments, etc.) are often automatically included, so make sure to make your preference known!

Noodle stands typically specialise in specific protein(s) or a certain preparation, such as kuaytiaw ruea, or “boat noodles”, featuring a rich soup full of beef or pork, including the Thai version of blood pudding, or kuaytiaw kai mara, with sliced chicken breast and bitter melon. Many kuaytiaw shops also offer a broth based on tom yam, the spicy, herbal soup that is comfort food for Thais like meatloaf is for Americans or a bowl of beef bourguignon is for the French.

Where to get it: Lim Lao Ngow (Bib Gourmand, MICHELIN Guide Thailand 2022) 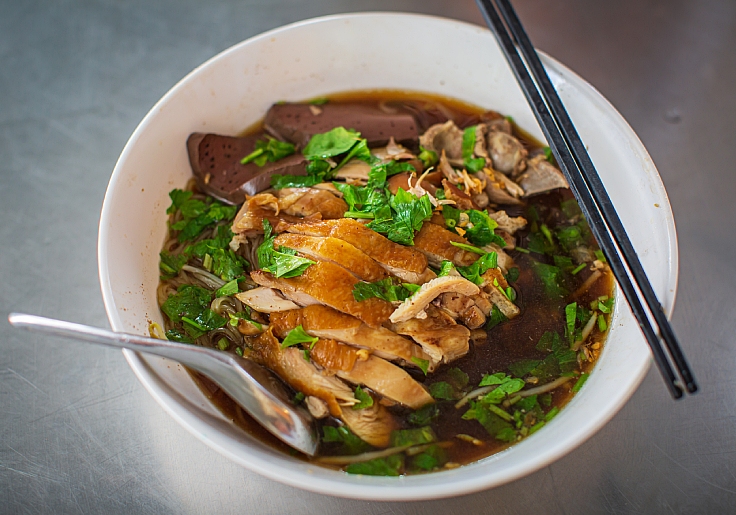 A bowl of duck noodle. (© Shutterstock)

Kuaytiaw pet is a subset of classic kuaytiaw, but it uses a radically different flavour base, as well as different toppings, and is usually only found at shops that specialise in duck dishes. The broth carries the heady aroma of Chinese five-spice powder, and the protein is always duck (that's the pet in the name), whether as slowly stewed duck legs or thinly sliced roasted duck breast.

Where to get it: Tung Sui Heng Pochana (Bib Gourmand, MICHELIN Guide Thailand 2022)

RELATED STORY: 10 Thai Street Food Dishes To Try (And Where To Find Them) 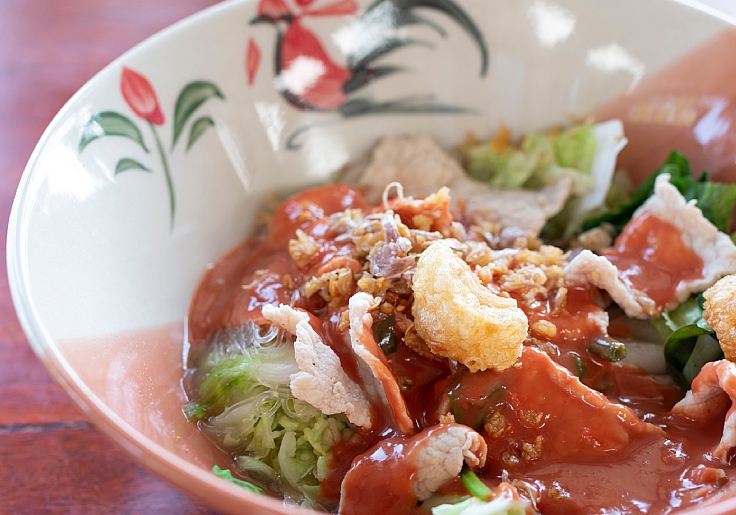 Yentafo is another kuaytiaw subset based on Chinese red tofu, a fermented version with a scent reminiscent of gorgonzola cheese (don't be frightened, it's far more accessible than Taiwanese stinky tofu). This creates a particularly strong flavour that complements the chewy fish balls while cutting through any fishiness. Phak bung, or Thai morning glory, is also a typical accompaniment, adding another textural level.

Where to get it: Jay Jia Yentafo (MICHELIN-selected, MICHELIN Guide Thailand 2022) 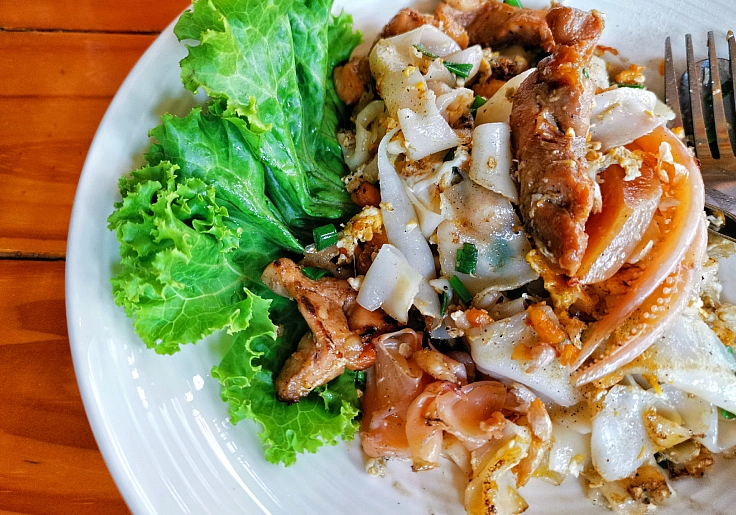 A third, and somewhat less common variation, is kuaytiaw khua kai, consisting of sen yai stir-fried (typically without much vigour, giving the noodles a roasted quality) with ingredients such as chicken and egg (always) and dried squid (frequently). Unlike the other kuaytiaw varieties discussed above, which are Thai variations on Chinese recipes, kuaytiaw khua kai is a Bangkok original, originating in the city's Talat Noi neighbourhood during World War II. 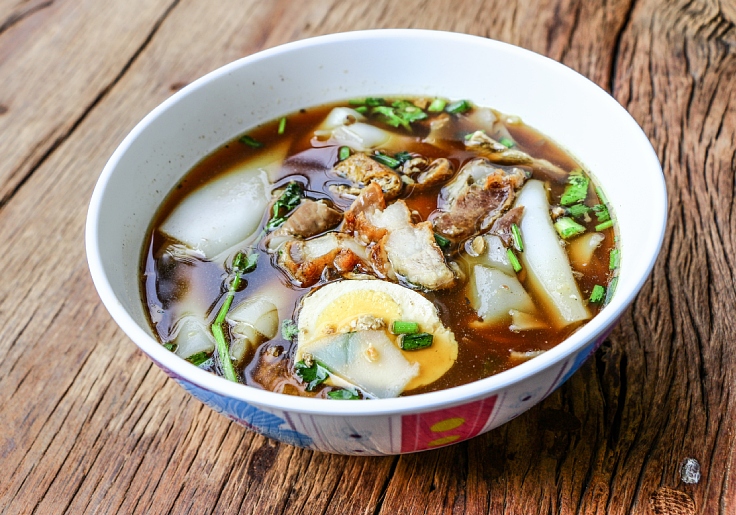 Kuay jap represents an iconic dish of the Teochew people from Eastern Guangdong Province, who migrated across Southeast Asia from the 19th century onwards, and whose cuisine, with its heavy emphasis on braising, made a serious impact on the region. What makes kuay jap truly distinctive are the noodles, which are far thicker and are most commonly served as chewy, rolled-up strands with the consistency of udon. It can be a bit intimidating, as the texture is not for everyone, nor are the accompaniments which are likely to include a whole range of pork innards, from hearts to intestines and everything in between.

Where to get it: Guay Jub Ouan Pochana (Bib Gourmand, MICHELIN Guide Thailand 2022) 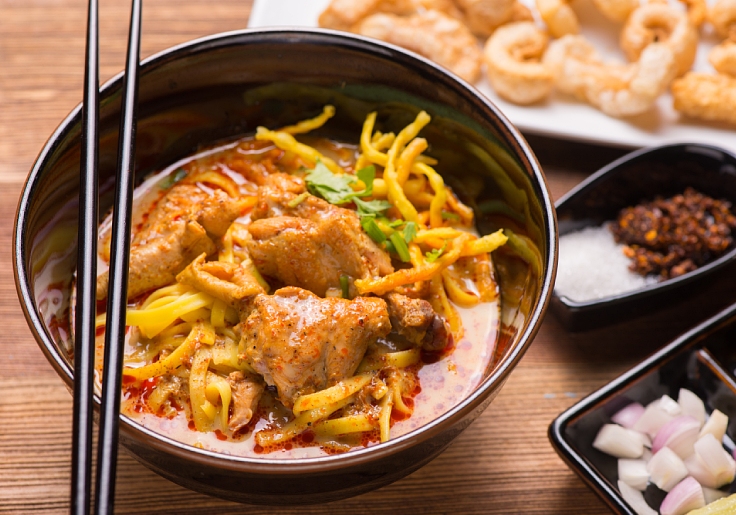 A bowl of khao soi. (© Shutterstock)

While many noodle dishes made their way to Thailand from Southeastern China, khao soi comes from China’s Yunnan Province. Caravan traders, known as haw, bought this dish from where tropical jungles meet the Himalayas through Myanmar to Northern Thailand. The name is most likely a Thai attempt at pronouncing the Burmese khao shwe, meaning noodles. Khao soi consists of bami submerged in a thick, spicy, coconut-based curry, topped with fried noodles and a mix of shallots and pickled vegetables. The protein is typically chicken, but beef is often available, pork less often (largely because many haw traders were devout Muslims). Despite its Yunnanese origins, khao soi has become the almost unquestioned representative dish of Northern Thailand, and a trip to Chiang Mai is never complete without a bowl.

Where to get it: Ongtong (Bib Gourmand, MICHELIN Guide Thailand 2022) 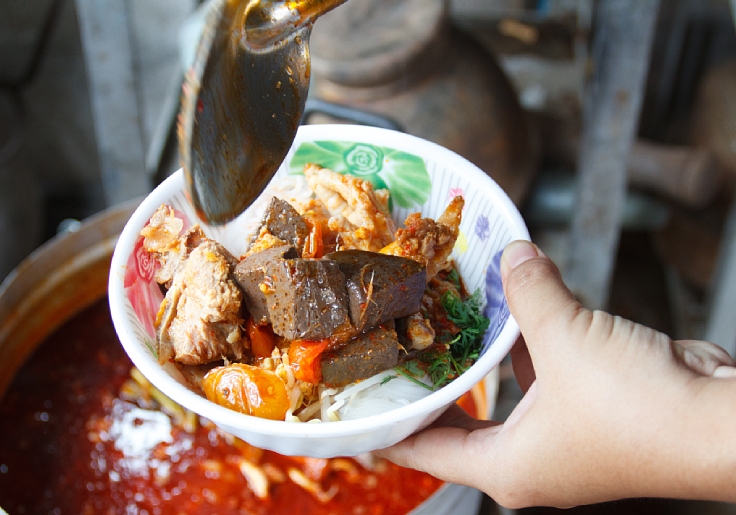 When it comes to versatility with curries and soups, khanom chin has no parallel. The name comes from the Mon word hanom chin, meaning boiled noodles, and a close cousin is found in mohinga, the fish noodle soup ubiquitous in Myanmar. Traditional versions are fermented, but this is something of a rarity nowadays, with most shops using noodles ready-made from fresh flour. Their use varies from region to region. In the North, they are frequently topped with nam ngiaw, a rich soup made with pork and the dried blossoms of the red kapok tree. In the Central and Southern regions, they are paired with a wide variety of curries and sauces, ranging from the sweet, peanut-heavy nam phrik (no relation to the Thai relish of the same name) to the violently spicy kaeng tai pla, a Southern black curry flavoured with fermented fish innards (better than it sounds!). Khanom chin is also extremely versatile as diners pick from curried toppings and a wide array of fresh and pickled vegetables as accompaniments.

Where to get it: Thai Niyom (Bib Gourmand, MICHELIN Guide Thailand 2022) 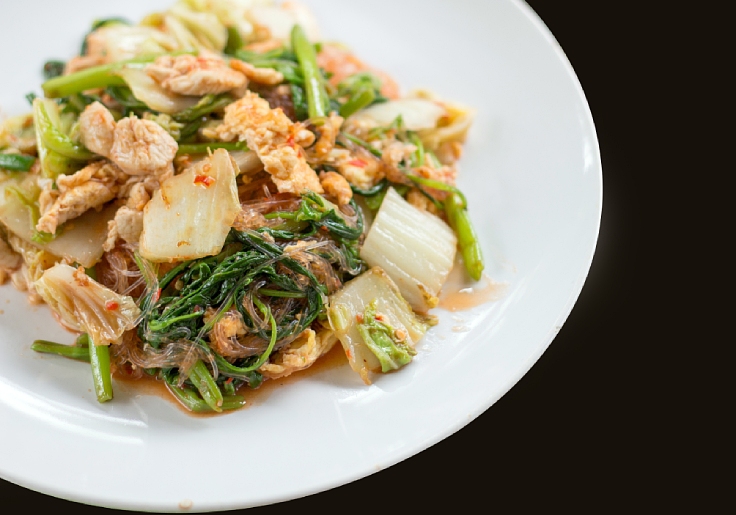 The Thai take on sukiyaki. (© Shutterstock)

A relatively modern adaptation of the Japanese sukiyaki that became popular in Bangkok in the '50s and '60s, Thai suki takes the essential sukiyaki flavours and ingredients and gives them a Thai twist. Instead of being served from a central hotpot, Thai suki is served as an individual dish in which wun sen is either served in a soup (suki nam) with proteins and blanched vegetables, or stir-fried with the same (suki haeng). In both cases, much of the flavour comes from the sauce, based on fermented tofu and sesame. In the soup version it's mixed in, and in the dry version, it's drizzled on top.

Where to get it: Elvis Suki (Bib Gourmand, MICHELIN Guide Thailand 2022)

These Are Ayutthaya’s Best Budget-Friendly Spots Of 2022

Time to visit the old capital of Thailand...

Baan Somtum: Delicious Isan Dishes That Are Perfect To Share With Friends

These mouthwatering menu items straight from the mortar that you shouldn’t miss.

street food Bib Gourmand Behind The Bib
Dining Out 5 minutes

Don’t pass up on these delicious and inexpensive eateries when in the south of Thailand.

Delicious dining that’s easy on the wallet can be found at these fab MICHELIN picks in Bangkok's Si Lom-Sathon neighbourhood.