How To Make Paella At Home

Printed inside the front cover of José Andrés’s cookbook Made in Spain is the line: “I won’t be happy until there is a paella pan on every backyard grill in America.” While it certainly isn’t an easy dish, Andrés believes paella can—and should—be made and enjoyed at home.

At his flagship Spanish restaurant, Jaleo, in Washington, D.C., paellas for a crowd are made to order and served tableside. The Bethesda location also offers public and private classes to teach guests how to prepare the classic dish for themselves.

Though Daniel Lugo, head chef of the Bethesda Jaleo, is Puerto Rican with Spanish heritage, he credits Andrés with teaching him about paella while working at the now-shuttered Mi Casa in Puerto Rico. “That’s when I truly learned the art of cooking paella," he says. "Trust me, I thought I knew how to cook paella.”

Here, he shares some of the expertise he's gained over the years.

There’s much debate about what you can and can’t call a paella. Paella Valenciana is the original, made with a traditional set of ingredients including rabbit, chicken and beans. “People from Valencia are very [protective of] their paellas, so everything else that is not that paella they call arroz—arroz made in a paella pan,” Lugo explains.

For everyone except diehard Valencians, you can broaden the definition a bit. “If you cook it in a paella pan, you’re safe to call it a paella.”

Equipment and Ingredients for Paella

“The first thing you’re going to need is, of course, a paella pan. Because without a paella pan, it’s not a paella,” Lugo says. Paella pans are wide, shallow and flat-bottomed, allowing you to spread the rice out for even cooking.

The size of the pan is especially important. A 12-inch pan is very manageable and can cook one cup of rice. Lugo recommends the brand Pata Negra, but says you can also find lower-cost options from Amazon.

The heat source on which you cook the paella also matters. Lugo says a gas flame offers the most consistency, whether it’s a stovetop burner, a gas grill or an outdoor paella ring. More adventurous home cooks could choose to cook over a fire pit or a charcoal grill, but it requires more skill to control the heat.

If your only option is an electric stove, you’ll want to use a smaller six-inch paella pan and finish it in the oven, which will ensure the dish cooks evenly and at the right speed.

Rice is another key factor that can make or break your paella, and Lugo recommends Spanish bomba rice. Bomba is a short grain rice that can absorb three to four times its volume in stock, producing a more concentrated flavor, which lays the foundation of the dish. (Arborio rice is not an adequate substitute because it is too starchy and can’t absorb as much liquid.) You can find it at Spanish grocers or at high-end stores like Whole Foods. “It’s a little bit on the pricey side, but I’m telling you, it’s totally worth it,” he says.

Another flavor boost comes from salmorreta, which is a blend of ñora peppers, tomatoes and garlic. “Personally I add this to any paella that I make at home. This will be like the bomb of flavor,” Lugo says. If you can’t find ñora peppers, you could use sofrito instead—a sauce of tomatoes, onion, garlic and peppers—for a similar effect.

With the base of the paella established, you can add pretty much anything you like. Just follow the ratio of one cup of uncooked rice to four cups of add-ins. 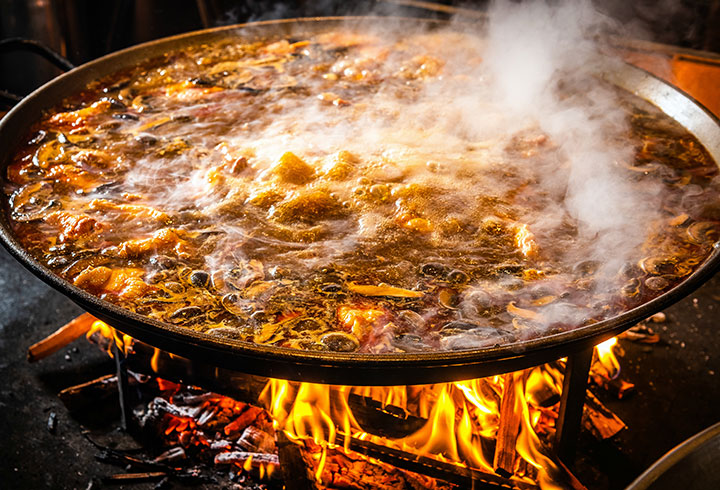 How to Cook Paella

Lugo says one of the most important ingredients for a paella is patience. “It takes a lot of time, and there are certain times that you cannot touch it,” he says. “If you move the paella, the rice will release the starch and then the liquid is going to be too thick and it will not cook the rice the right way.” Unlike risotto, stirring is the enemy of a paella.

You also want to make sure to have your mise en place set before you start cooking. “At the beginning, it’s a lot of quick processes. If you don’t have your ingredients ready, you might burn it or you’re going to have to turn down the fire and it’s not going to be the same.”

Depending on what ingredients you add to your paella, the start of the process will vary. For seafood, you should sear it in olive oil and set it aside, and then return it to the pan when the rice is almost done, letting the steam from the rice finish cooking the seafood. For meat (like chicken or rabbit) or vegetables, you’ll sear them and then push them to the outside of the pan to cook along with the rice, stock and other ingredients.

Lugo prefers to add the stock before the rice because it yields a more consistent result. “If you’re searing the rice, you’re basically starting the cooking process, and then you add the stock and it’s going to change the temperature of the paella,” he says.

You can add the rice once the stock is at a simmer. “You don’t want to dump it in on one side,” Lugo cautions. “You want to sprinkle it like salt,” which will ensure even cooking.

Shake the pan gently to evenly distribute the ingredients and let it simmer on high. “You’re going to get nervous, you’re going to be like ‘oh my god, is it going to burn,’ but like I said, patience.”

Watch the pan closely to see where the stock is bubbling more rigorously. Occasionally rotate the pan to distribute the heat and allow all sections of the pan to cook evenly.

After the liquid starts to thicken and you're able to see the rice emerge from the stock, turn the heat down to medium and don’t stir or move the rice. “It’s going to create this little barrier,” Lugo says. “That is basically creating like a little oven, which the rice is cooking underneath. If you move it, you’re disturbing the process.” Continue to decrease the heat as the liquid is absorbed by the rice.

From the point when you add the rice, it will take about 20 minutes to cook. “We cannot rush this process,” he says. You want the rice to have a little bite to it. “In the U.S., most people like the paella overcooked, but you should be able to feel the grain. You don’t want it to be too mushy.”

Near the end of the cooking, you want to create a socarrat, or a layer of crispy rice stuck to the bottom of the pan. To do this, turn the heat up to high and listen. “One of the things that José always teaches is the paella talks to you,” Lugo says. “You can hear those little bubbles; it’s telling you that the liquid is evaporating, and little by little, it’s creating that socarrat that we want. Once we can hear those bubbles, it means it’s almost done.”

The sound will get louder as the socarrat forms, but take care not to burn it at this stage. Test the crispiness of the bottom layer by inserting a spoon and feeling the texture against the pan.

The easiest way to finish a paella—especially if you’re using an electric stove—is in the oven. Set the temperature to 350 degrees and cook for about five minutes. This will add a nice crust and help the last bit of liquid evaporate.

How to Serve Paella

Paella is usually presented in the pan at the table. “There’s also a science of how you’re going to serve it,” Lugo says. “The middle is going to have more moisture than the edges.” Lugo likes to divide a triangular portion, mix the center with the edges to blend it all together, and spoon some onto each plate along with some alioli (aka aioli), a common accompaniment for paella.

cooking Recipe pork
All articles of Dining In