The MICHELIN Guide France 2022: French Gastronomy is Back On Track!

Michelin is pleased to present the 2022 restaurant selection of the MICHELIN Guide France. Unveiled today at Cognac theatre, at the heart of the Charentes region, and in the presence of a number of chefs and restaurant professionals coming together for the occasion, the new selection demonstrates the excellence, talent and creativity of the French gastronomic scene, which is particularly engaged and resilient. In total, there are 627 MICHELIN-Starred restaurants in the 2022 vintage, including 49 newly promoted eateries.

Located in a stunning and secluded cove in Cassis’ cap Canaille, La Villa Madie has reached the pinnacle of gastronomic success with its third MICHELIN Star. Managed by Dimitri and Marielle Droisneau since 2013, this charming restaurant is meant as an ode to the Mediterranean, which provides inspiration both for the design and the cuisine. In the dishes, influences of the Southern coast and inland region unfold in finely sculpted offerings. The taste combinations are striking, subtle and feature both elements of the sea and those of wild herbs and and plants picked in the surrounding area. The Carabineros shrimp on a red berry tartlet and the rabbit and jumbo shrimp fricassee with early apricots, are two of the house’s emblematic dishes, reflecting all the talent and elegance the two restauranteurs wish to share with their diners. As a nod to the roots of Marielle Droisneau, who brings unparalleled kindness and hospitality to the dining room, diners will find on each table an inconic Aveyron Le Livadou knife, used by wine-growers in the Marcillac-Vallon vineyard. 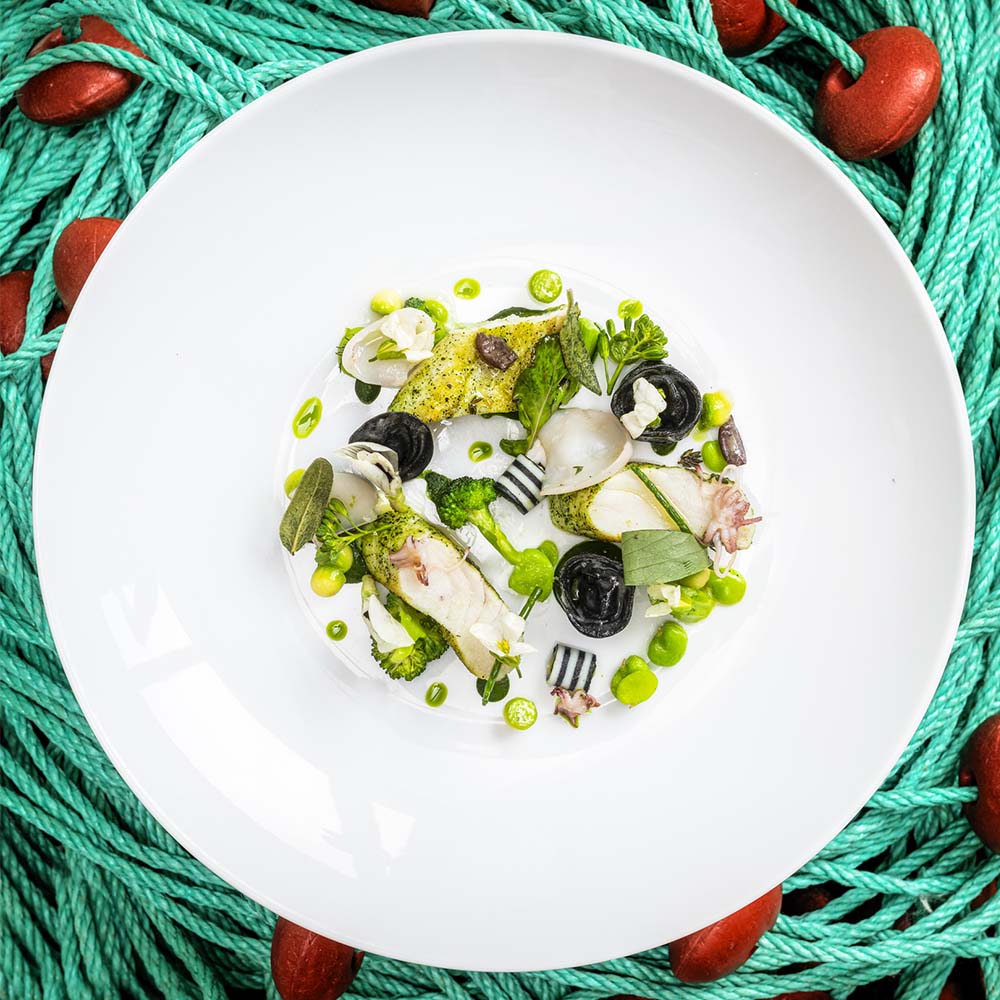 At the heart of the French capital and overlooking the Seine, Plénitude - Cheval Blanc Paris has succeeded in the feat of earning Three MICHELIN Stars in one go. Within the legendary Samaritaine building, chef Arnaud Donckele creates virtuoso dishes, revealing all the qualities of this artisan and ingenious master creator of sauces. At the table, the soul of French cooking is not only summoned and exalted, but reversed because the sauces, stocks and vinaigrettes, not only serve as binding agents, but take pride of place on the menu and in each dish. Just like a perfumer or alchemist combining rare and complex varieties, the prized nectars transport and enthrall diners, while whisking them away on an exceptional sensory experience. As the starting point for all the menus which gravitate around them, these sauces, which the chef has christened “Absolutes”, and explained in a menu which resembles a handbook, provide accords with remarkable accuracy. In the 2022 edition, the MICHELIN Guide France recommends 31 Three Stars restaurants. 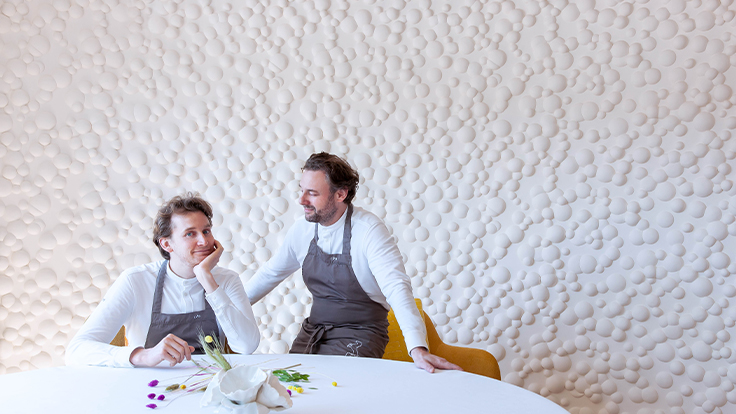 In Paris’ 12th district, Table delivers precise and subtle cuisine, entirely dedicated to exceptional produce which the self-taught chef, Bruno Verjus deftly enhances. The wanderlust-inspiring names – Crunchy Lobster on its Rock – are only equalled by the story of the products themselves, just like the Utah Beach oysters, which have escaped a pocket or two and which are harvested out to sea at 7-9 years old. This promotion of regional produce, as well as relationships of proximity forged with committed producers, earned the establishment a MICHELIN Green Star back in 2020.

In Monaco, eclecticism and sensitivity are the watchwords for the cuisine of Marcel Ravin, who, at the Blue Bay, takes his diners to discover his native Martinique and his childhood culinary memories. Martinique flavors and recipes are revisited and complemented with Mediterranean products, resulting in original and exotic creations, such as the green vegetable and Chayote soup with lightly seared red mullet strips and smoked tea, the marinated murex sea snails with spicy coconut water, cockles and urchin tongues, or the toasted sweet potato brioche with
pistachio crumbs.

At the heart of the Sauternes region, Lalique, which earned its first Star in 2019, proposes, under the aegis of chef Jérôme Schilling, dishes which pay tribute to local and seasonal produce, such as the hunter’s mallard and the St-Pierre-deMons tomato. Whether it be the single or the plant based menu, the cuisine is accurate, hearty and sharply honed, just like the Sauternes terroir. 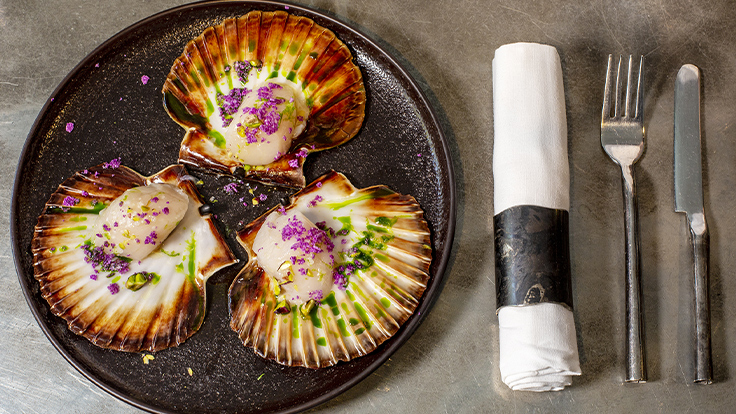 In Paris, Greek-born chef, Philip Chronopoulos and his team earned their second Star at the Palais Royal Restaurant. His Mediterraean cuisine with strong Greek influences, the only one of this type to have earned Two Stars in France, will carry diners away to far-flung climes. One-of-a-kind, the platters of refined mezze and the more personal creations, reveal flavors which are brimful of finesse and which convey this passionate chef’s commitment.

Finally, on the top floor of the Peninsula, at the L’Oiseau Blanc restaurant, named after the plane – which has been reproduced and exhibited on top of the hotel – aboard which Nungesser and Coli attempted a trans-Atlantic crossing in 1927, chef David Bizet conducts a musical score with great precision. Offering modern and seasonal fayre, the chef wonderfully masters texture combinations, different types of cooking, sauces and emulsions. Here, culinary techniques are entirely dedicated to sparking emotions, accompanied by an artistic sensitivty which is expressed through a pure and graphic presentation.

In total, 74 restaurants have received Two MICHELIN Stars in the 2022 selection. 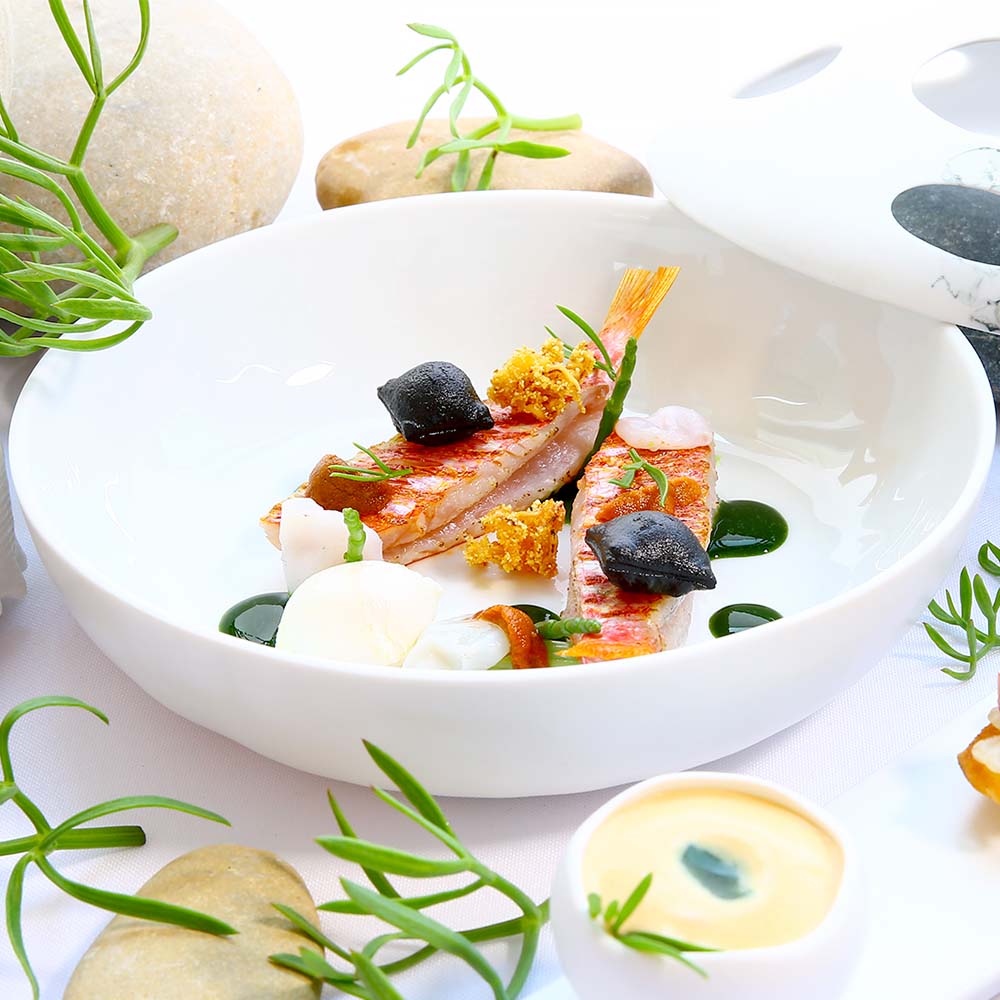 The inspection teams travelled the length and breadth of France searching for new gastronomic talent. With 41 tables joining the One MICHELIN Star selection, the MICHELIN GUIDE inspectors hope to share with the Guide’s gourmet community, a whole host of discoveries throughout France.

Among the most endowed regions, Ile-de-France, and more precisely, Paris, can pride themselves in their 12 new restaurants, featuring a highly eclectic gastronomic offering. From Japanese flavors at Ogata in the 3rd district, to topflight sushi at Sushi Shunei in the 18th district and not forgetting the Italian influenced menus by Oliver Piras and Alessandra Del Favero at Il Carpaccio in the 8th district, the whole world is reflected in the French capital’s dishes. Paris’ oldest inn, L’Auberge Nicolas Flamel, which opened in 1407, and which is run today by Grégory Garimbay, also received its first Star, as well as Jean Imbert at Plaza Athénée for his impressive revival of the greatest classics of French gastronomy and FIEF, where chef Victor Mercier produces empowering cuisine, made exclusively using French produce.

Brittany and Provence-Alpes-Côte d’Azur have not been outdone, with 6 and 4 new One Star restaurants respectively. In Brest, at L’Embrun, Guillaume Pape, who once worked with Olivier Belin in Plomodiern, pays a vibrant tribute to Brittany terroir, just like the Le Tirrand brothers – one of whom is in the kitchen while the other is out front – at Sources in Lorient. Le Gavrinis in Baden, managed with an expert hand by chef Luca Marteddu, has been promoted from a Bib Gourmand to One MICHELIN Star. The Armorican flavors marry with those from Provence, which Hélène Darroze delivers packed-full with personality at Villa La Coste in Puy-Sainte-Réparade. In Roquebrune-Cap-Martin, in Ceto at The Maybourne Riviera Hotel, Mauro Colagrecco and his team produce a very sea-based cuisine, where fish cold cuts, matured in a special cellar, are used to season dishes. 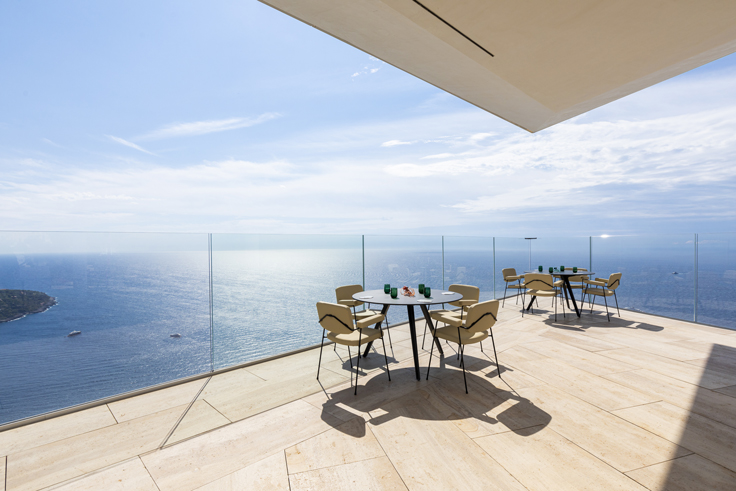 In Nouvelle-Aquitaine, of the 5 newly Starred restaurants, Les Belles Perdrix de Troplong Mondot, run by David Charrier, allows diners to sample a cuisine among the vines which pays homage to South-West French produce. Pauillac lamb, Aquitaine caviar or eel complement to perfection all the riches of the restaurant’s kitchen garden. In Ciboure, Guillaume Roget, a former sommelier who moved into the kitchen, proposes in Ekaitza – “storm” in Basque – a dynamic cuisine where, atypically, diners are invited to choose their own food-wine pairings. In Bordeaux, la Maison Nouvelle by Philippe Etchebest was recognized for its accurate, casual and gourmet cuisine.

In Nancy, Charles and Roxanne Coulombeau, both with remarkable track-records, have taken the helm at La Maison dans le Parc, a local institution which they have deftly brought up to date with more modern food. In the mountains, Sylvestre Wahid – Les Grandes Alpes in Courchevel and La Dame de Pic – le 1920 in Megève, also received their first Star.

Within the 2022 selection of the MICHELIN Guide France, 522 One Star addresses have been recommended.

For the third year running, the MICHELIN Guide has awarded its Green Star to restaurants from its selections which stand out for their ambitious approach to more sustainable gastronomy.
Each defining working philosophies and particularly engaged and inspiring dining experiences in their own manner, 6 new establishments have received the MICHELIN Green Star : Domaine Riberach - La Coopérative in Bélesta, Toya in Faulquemont, La Table de la Butte in Plouider, La Table du Gourmet in Riquewihr, Les Belles Perdrix de Troplong Mondot in Saint-Emillion and l'Auberge Sauvage in Servon. These 6 addresses join the 81 establishments which received the award last year in France, which boasts a pioneering gastronomic scene in the field. 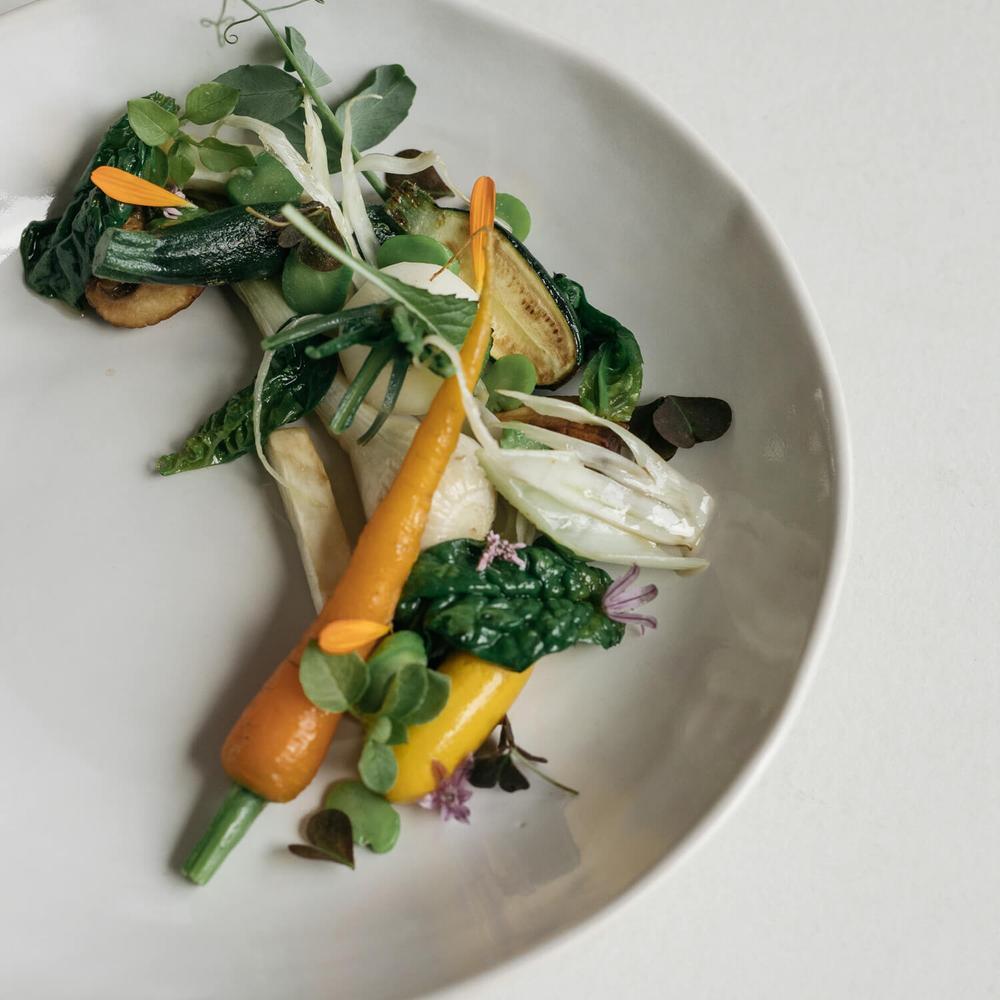 A distinction very much in demand by gourmets looking for restaurants with a good quality-price ratio (full menu for 35 euros outside Paris and 39 euros in Paris), the Bib Gourmand has been awarded to 33 new restaurants located all over France. Whether in Blainville-sur-Mer in the Manche, where Lionel Cotentin serves gourmet and hearty cuisine at L’Athome, at Au Clos Saint-Martin – La Métairie, in Cathar country, where chef Mélanie Zervos is at the helm, or L’Épicerie in the potter’s village of La Borne in the Cher Department, run by chefs Clémentine Préault and Mathieu Dalivoust, the Bib Gourmand 2022 selection places an onus on restaurants which are firmly rooted in their terroir and which exalt local, seasonal and laid-back cuisine. In Lyon, the generosity so typical of Bergamote’s dishes reasserts with enthusiasm and modernity that the culture of eating well is still very much alive in the French capital, while Michel Dussau, who long held One MICHELIN Star, now produces simpler but not less succulent fayre at La Table de Michel Dussau in Agen.

449 tables have received a Bib Gourmand in the 2022 edition of the MICHELIN Guide France.

The First Day We Got Our Stars: Christophe Bacquié

The chef shares his joy at Restaurant Christophe Bacquie being one of the two restaurants to receive three MICHELIN stars for the first time in the MICHELIN Guide France 2018.

Planning an epicurean trip to France? Make time to visit these Michelin-starred restaurants fronted by Asian chefs who have carved a name for themselves in the French culinary world.

This year's guide includes a total of 621 starred restaurants.