Jungsik and Kojima elevated to 2 Stars in Michelin Guide Seoul 2018.

Michelin has unveiled the Michelin Guide Seoul 2018, featuring a total of 175 restaurants in the city.

“We are excited to announce that our selection has been enriched by newly found restaurants, showcasing the vibrant local dining scene in Seoul,” comments Michael Ellis, International Director in charge of the Michelin guides.
In the new selection, Gaon and La Yeon each maintained their three-star status, a distinction gained last year in the very first edition of the Michelin Guide Seoul. Meanwhile, two restaurants–Jungsik and Kojima–have been promoted from one star to two stars this year. Jungsik by Yim Jung-sik is credited with introducing Korean cuisine to the world with his Seoul flagship and New York restaurants. Drawing inspiration from the familiar–kimbap, bibimbap, gujeolpan and bossam—the chef has a flair for creating the unexpected that is both evocative and authentic at the same time. Also elevated to a two-star status is Kojima which offers some of the most exquisite Japanese food in Seoul – a testament to Chef Park Kyung-jae’s technical finesse as well as his mastery of the art of sushi. 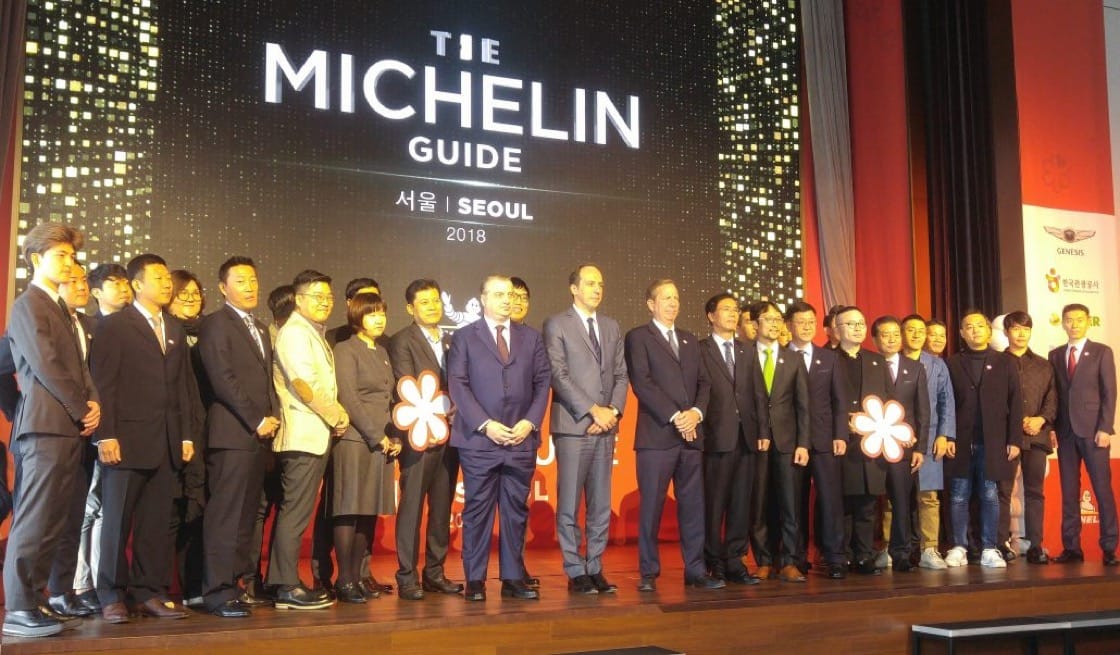 The Michelin Guide Seoul 2018 lists a total of 18 one-starred restaurants, four of which are new entrants. Exquisine by Chef Jang Kyung-won is one of them. Driven by his knowledge of local products and his understanding of the fine balance between flavors and ingredients, the restaurant showcases flavors that ultimately reflect the chef’s unique style. Exquisine offers a fixed menu for lunch and dinner that change frequently based on the availability of ingredients.

Dosa by Back Seung-wook, whose modern creations pay homage to the chef’s Korean roots, also gains one star this year. The restaurant’s open kitchen, which offers a dynamic view of the chefs in action, is a feature not to be missed.

Joo Ok, a Korean-style bistro by Shin Chang-ho, is another new entrant in the one-star designation. Shin, who built his career at Nobu Miami, is lauded for his creative use of food ingredients and impeccable presentation.

Last but not least, Table for Four also earns its first-ever star in the 2018 selection. Chef Kim Sung Woon serves European-inspired cuisine using some of the finest seafood the local waters have to offer.

Last week, Michelin Seoul announced the 48 restaurants made the 2018 Seoul Bib Gourmand category, of which 17 are new entrants. The Bib Gourmand distinction is awarded to establishments offering a quality meal for under KRW35,000.

Meanwhile, ‘The Plate’ is a brand new feature introduced in 2018 selection. It’s a symbol that will indicate “restaurants where the inspectors have discovered quality food.” From now on, expect to see the symbol next to any restaurant in the guide that isn’t a Bib Gourmand or a starred restaurant.

Here is the full selection of the Michelin Guide Seoul 2018.