Cafes and restaurants have been getting creative with heritage snacks of late. At Revolution Coffee, chef Shen Tan serves up a Kueh Dadar mille crepe – layers of pandan crepe packed with whipped coconut cream and salted gula Melaka. Similarly at The Malayan Council, ondeh ondeh is reinterpreted as a layered cake with a soft pandan sponge cake contrasting with crispy bits of gula Melaka.

These modern spins are just the latest innovation in the world of Malay and Indonesian kueh – those bite-sized desserts made from local and regional ingredients through age-old, often laborious techniques. It demonstrates how well-received and timeless these flavours are.

In fact, they are so well-loved that the recipes have been crossing kingdoms and seas for centuries, made itself home in other communities and most tellingly, brought into the rarefied realm of Michelin-starred establishments by way of Peranakan restaurant Candlenut which serves kueh salat with a coconut sorbet. 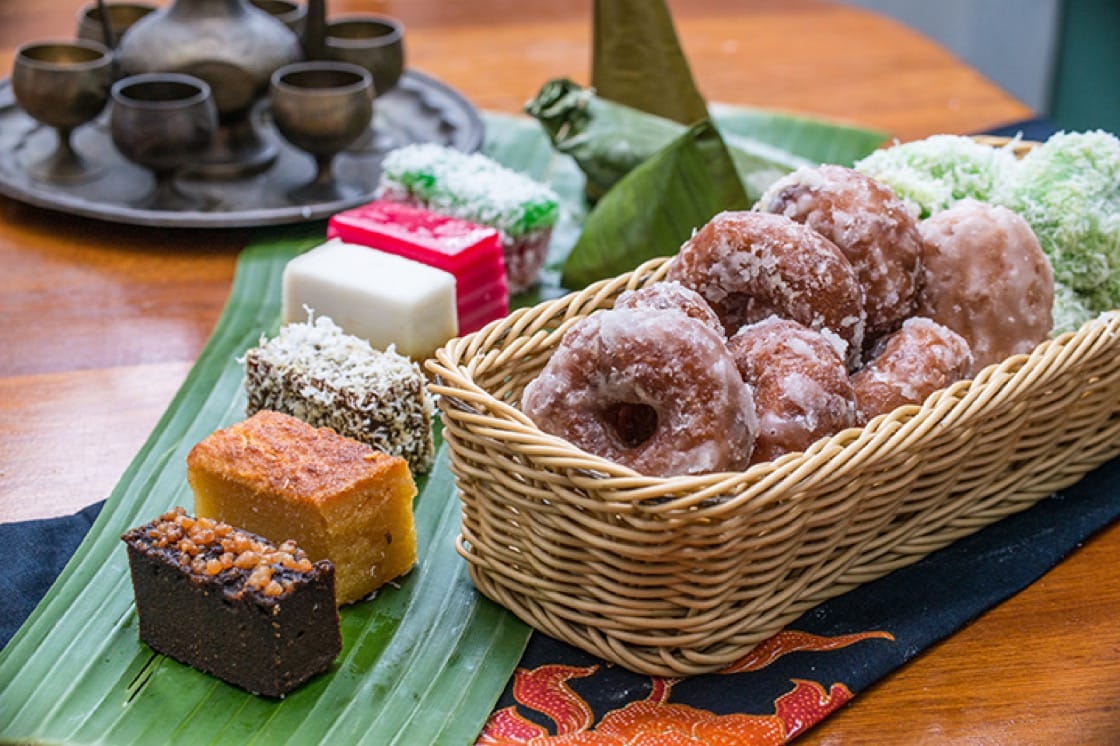 Indeed, the examples are but only three of the more popular kueh to have captured modern imagination. In fact, there’s an entire range of little-known Malay kueh made from ingredients like glutinous rice, tubers, green bean flour – even coconut milk that’s been boiled until the caramelised bits separate from the oil.

Over at Bib Gourmand awarded nasi padang eatery Hjh Maimunah though, these age-old recipes are replicated to a tee every day – all 30 of them in fact.

The processes are time consuming and to meet the needs of the eatery, the pastry team starts work at midnight. Here, no shortcuts are taken and only the best of ingredients are used. Case in point: the palm sugar is made in a village in the Riau Islands and brought in by small time traders.

It's a steadfast commitment to tradition, and a sincere approach to cooking. “It comes from the heart,” says Madam Supinah who leads the pastry making processes. “When you make kueh, you must be sincere. Sincerity and love towards what you do is the reason why the kueh will be good". 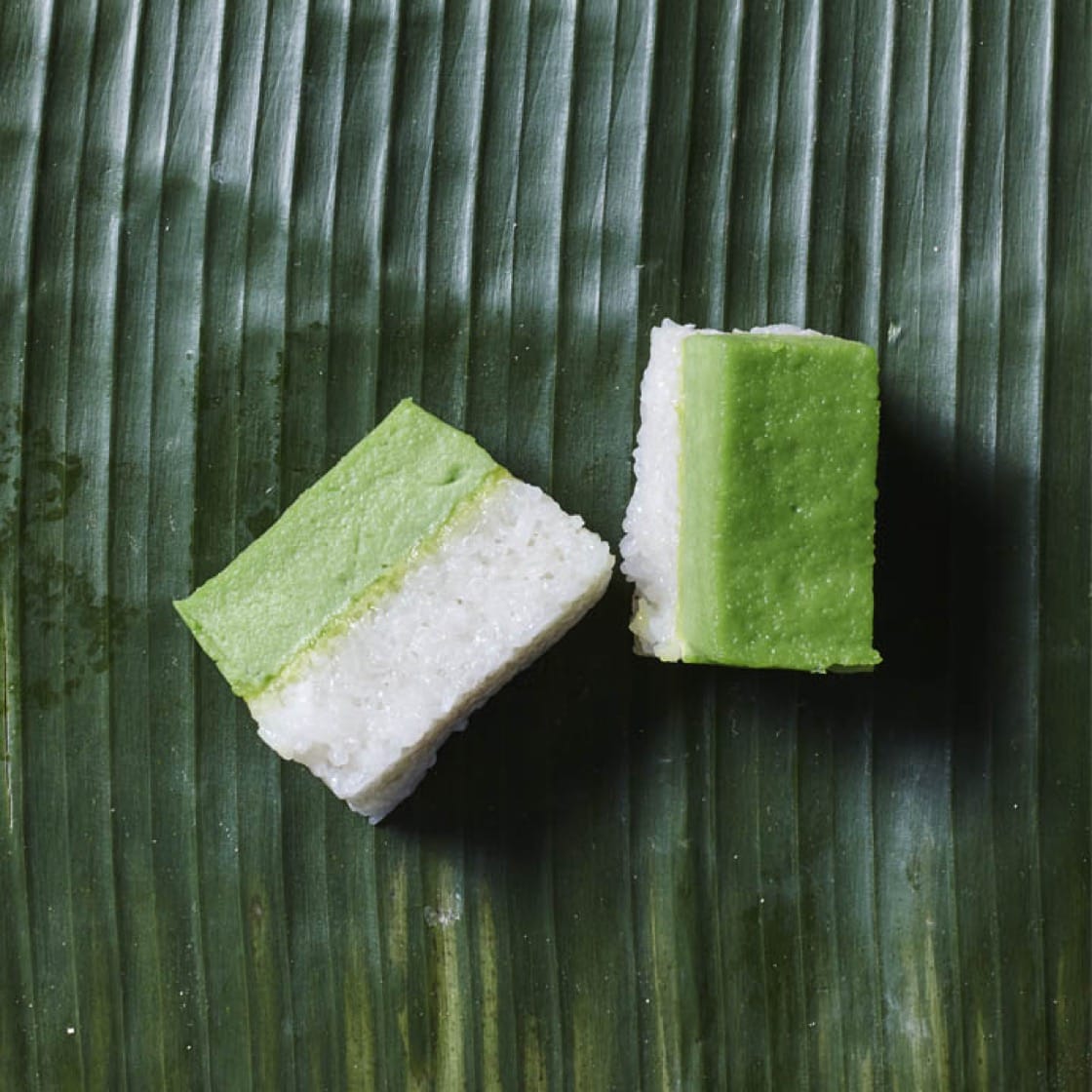 Putri Salat
This local flavourite goes by many names: kueh salat as it’s popularly known or putri salat and seri muka in Indonesia. It’s a dual layer steamed cake with a base made of glutinous rice flavoured with rich coconut milk and a pandan custard made of pandan juice, eggs, sugar and coconut milk. The Peranakans have their own adaptation which often includes butterfly pea to colour the rice. Another version called putri salat sago is also made substituting the glutinous rice layer with sago. 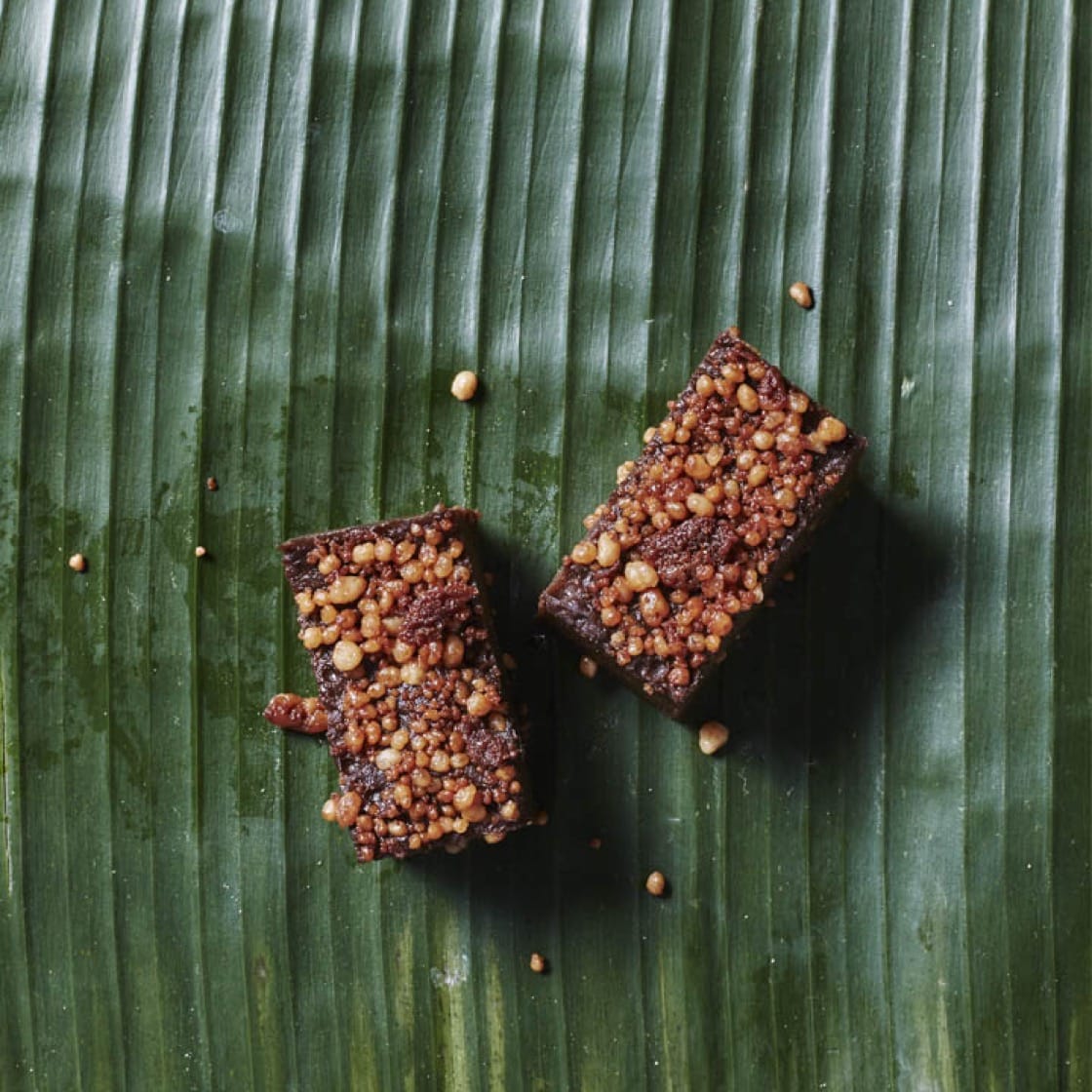 Kole Kole
It resembles a chocolate mousse cake, but the kole kole (pronounced ko-lay ko-lay) is anything but. The colour is thanks to a batter made of palm sugar, green bean flour, vanilla essence and coconut milk which is cooked over a stove. This is then poured into a container and left to set. Once ready, it is topped with bits of caramelised coconut made by stirring coconut milk continuously over a low heat until the liquid separates into oil and solids – a process which takes up to two hours. 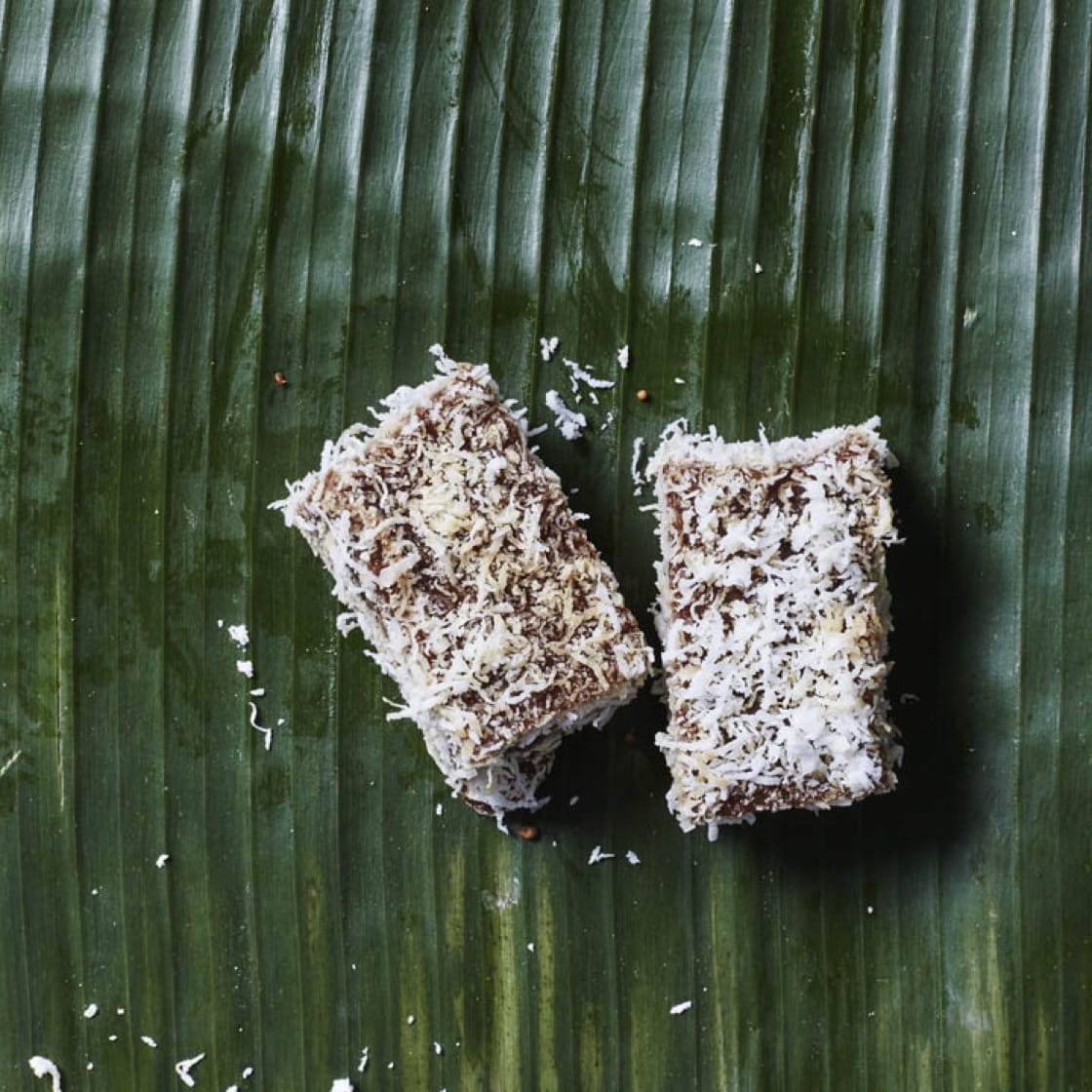 Kaswi
This gelatinous steamed kueh gets its texture from the main component: tapioca flour. Like the kole kole, it also derives its colour and flavour from palm sugar. Once cooked, it is served with steamed grated coconut flavoured with a pinch of salt. 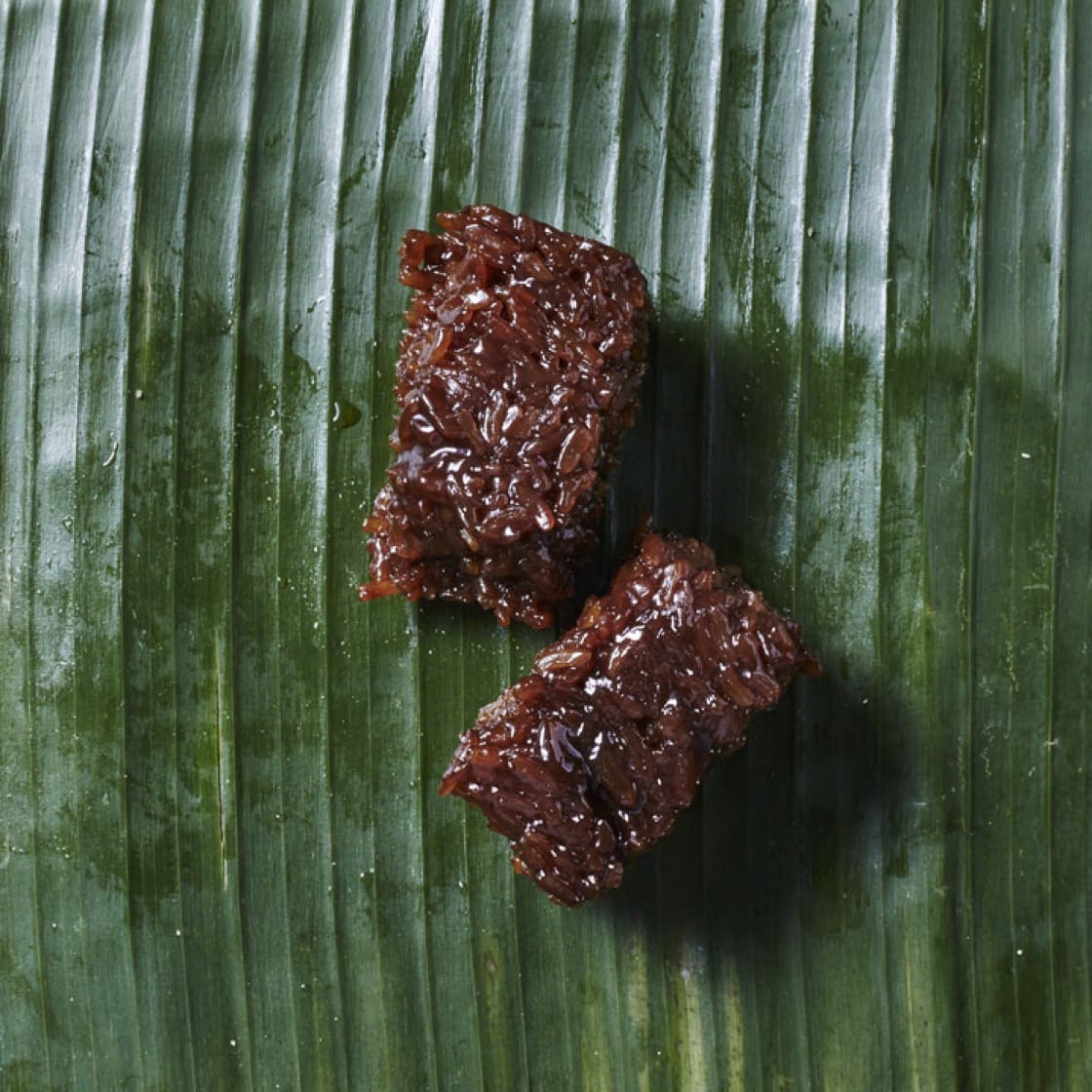 Wajik
If you enjoy the texture of glutinous rice then wajik might just be your new favourite kueh. It’s made mainly of glutinous rice sweetened with palm sugar that’s compressed in a container and then steamed. Despite its ubiquity in many Malay eateries, the dish holds great significance in Java where it’s enjoyed during slamatan ceremonies – social gatherings meant to mark special occasions like births and marriages. 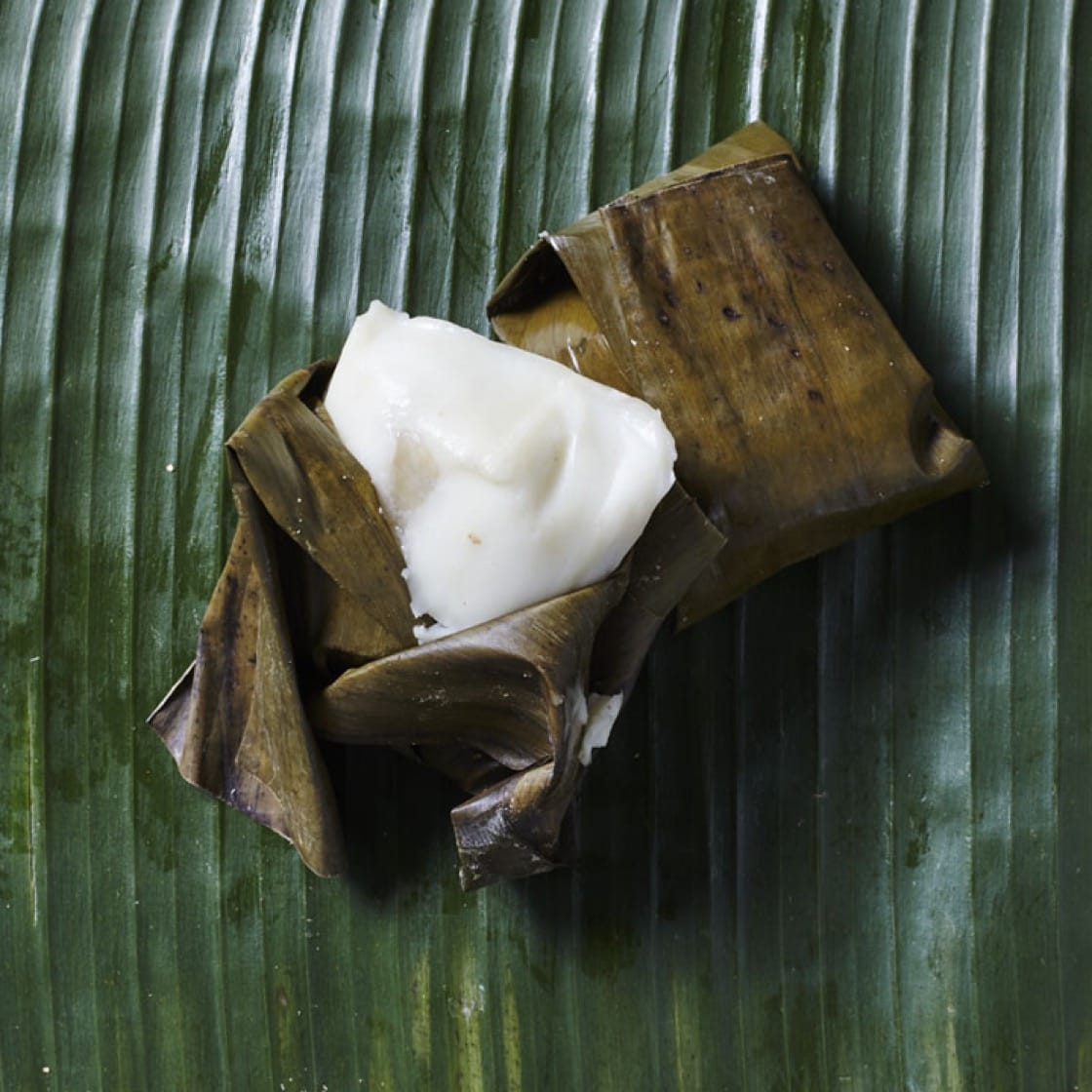 Nagasari
Good things are often left to be unwrapped. For nagasari, unfolding the banana leaves not only reveal a chewy white confectionery, the centre contains a piece of banana too. This kueh is made by cooking a mixture of coconut milk with rice flour, corn flour and coconut milk over a stove until it thickens. Next, it’s formed into a patty that’s used to wrap a slice of banana and encased in a banana leaf to steam. 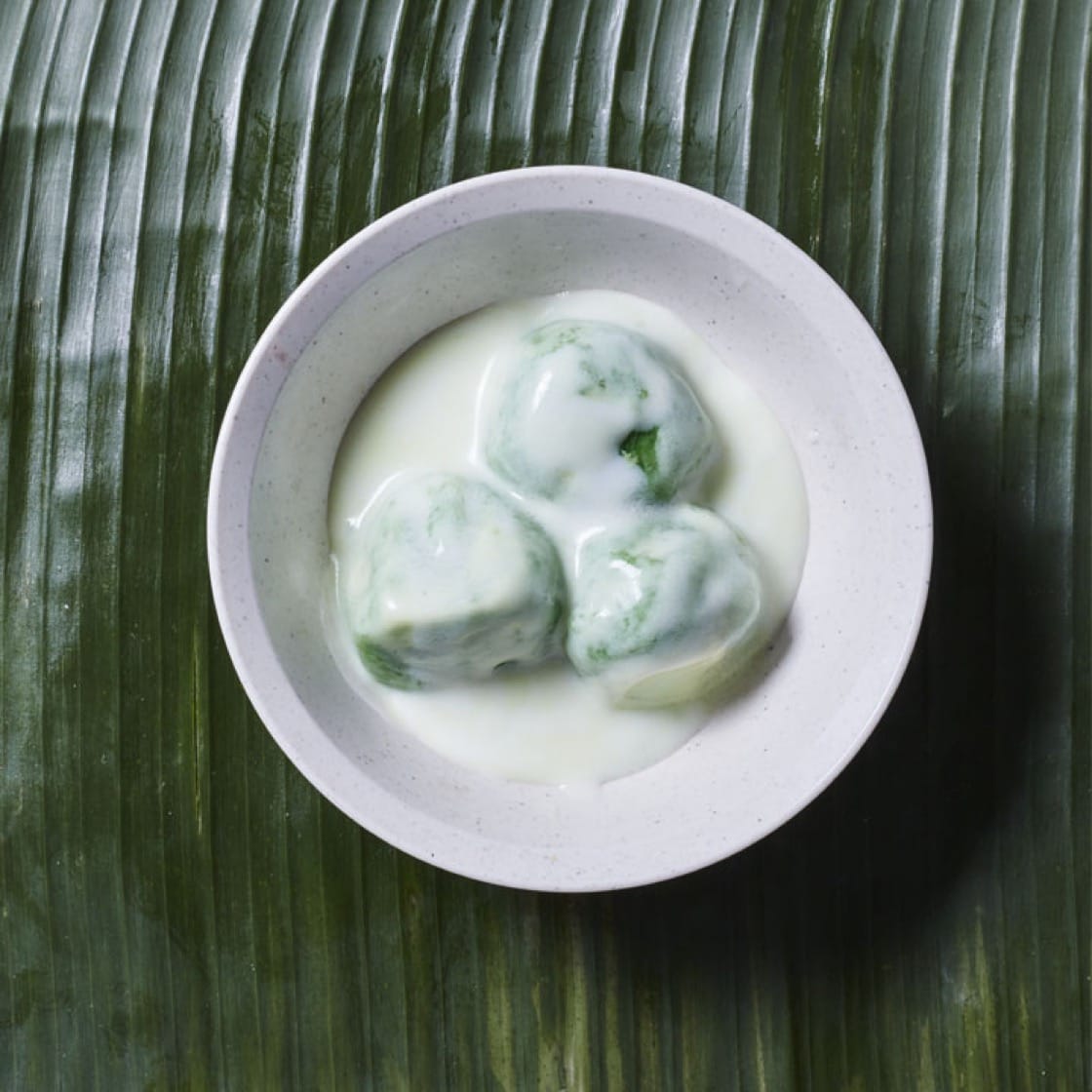 Badak Berendam
Ondeh ondeh might be well known but it’s close cousin, the badak berendam (literally translated to soaking hippo) is just as delicious. Here, glutinous rice balls stuffed with palm sugar is enjoyed with a spoon as it’s served with a generous serving of a ‘gravy’ – a savour offset made of coconut milk, water and salt thickened with corn starch. 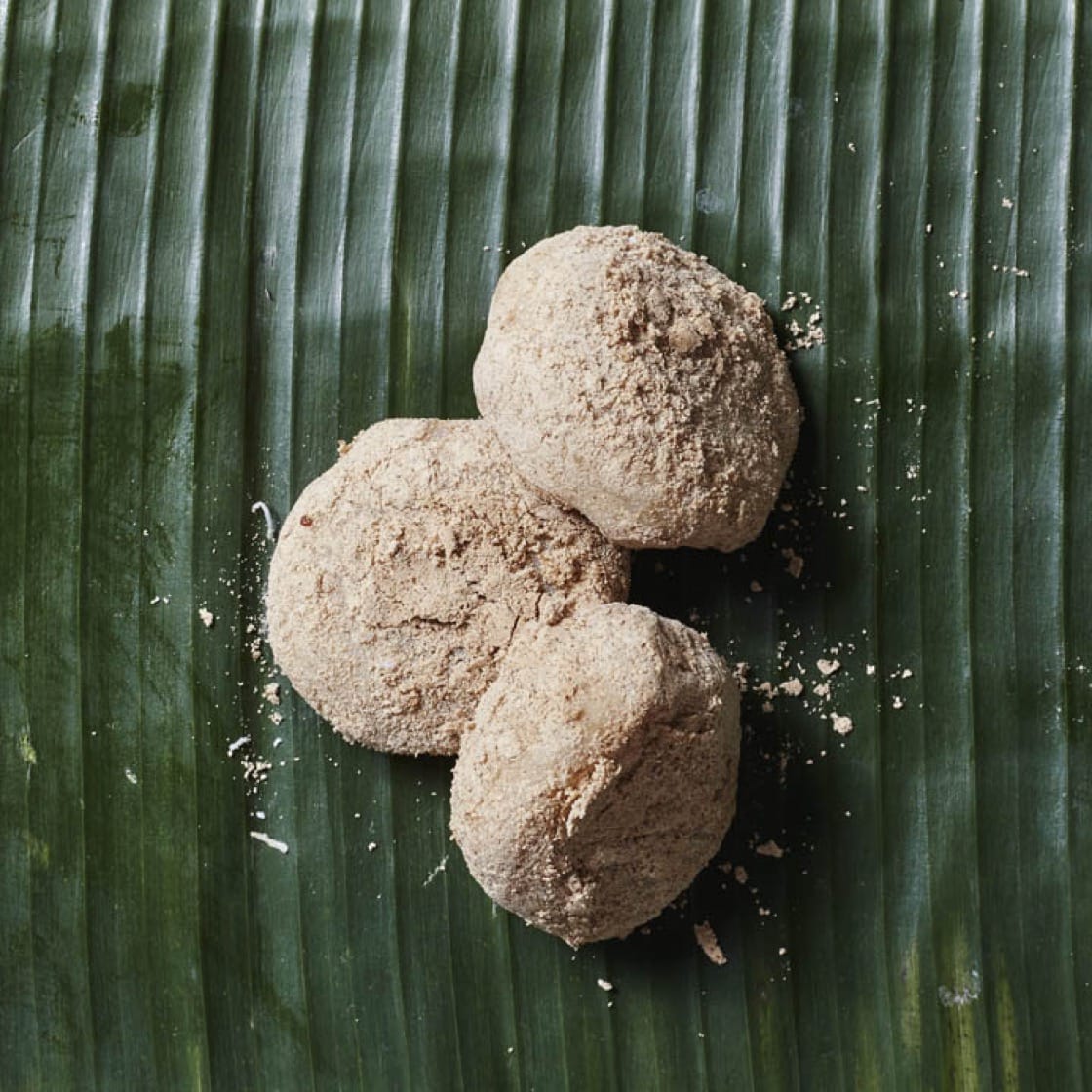 Tepung Gomak
This powdery kueh is made of two types of flours: rice flour and green bean flour. The former is what forms the dough patty that’s cooked in boiling water while the latter is toasted and used as the powdery coating. These chewy morsels are either filled with inti kelapa or inti kacang hijau (green beans with palm sugar). 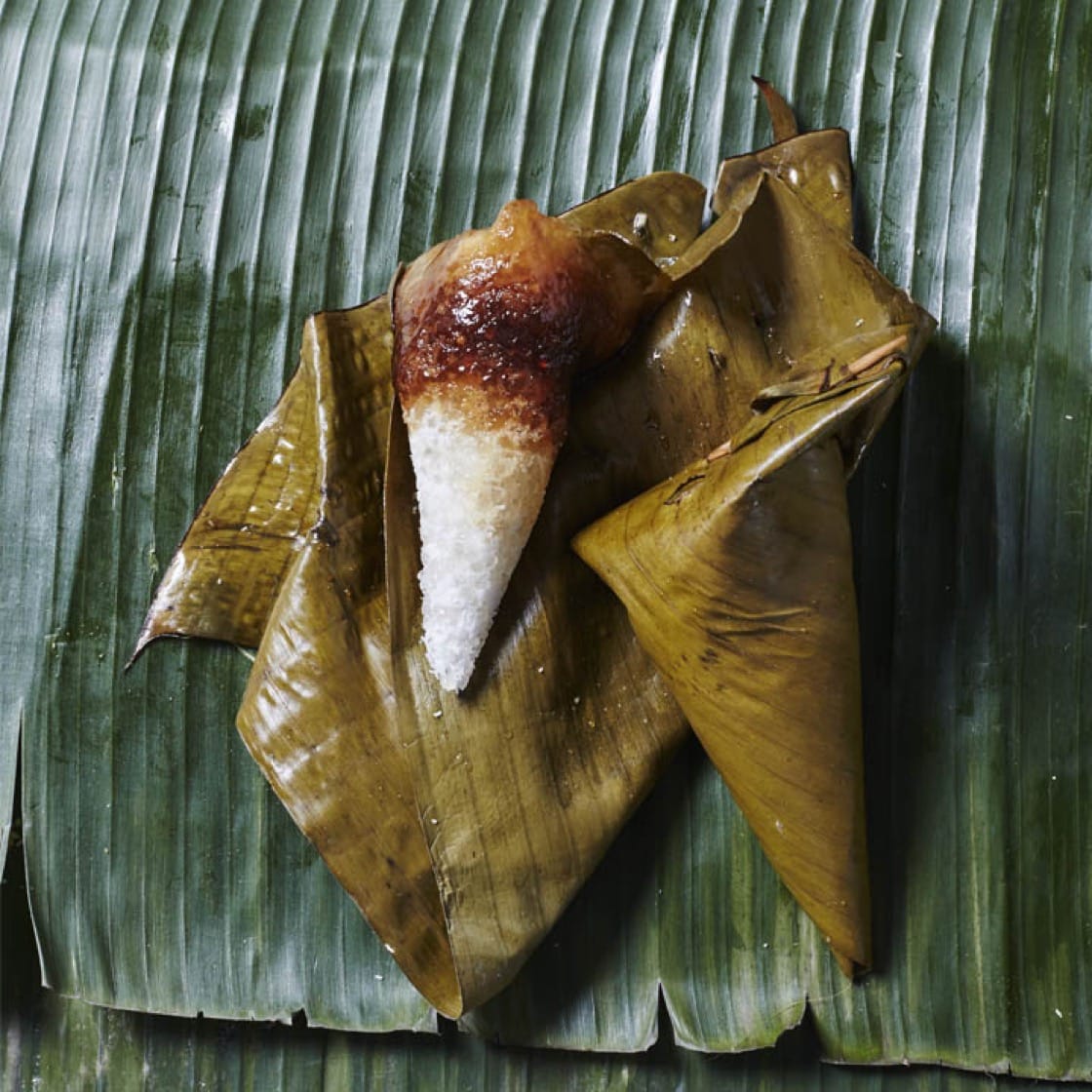 Abok Abok
This conical kueh is fairly straightforward to make – provided you can get the conical shape down pat. Sago is first mixed with grated coconuts and salt which is then placed on a banana leaf. Then, bits of palm sugar are added. The entire cone is held together by a toothpick and cooked by steaming, which melts the palm sugar into a molten liquid that soaks into the sago. 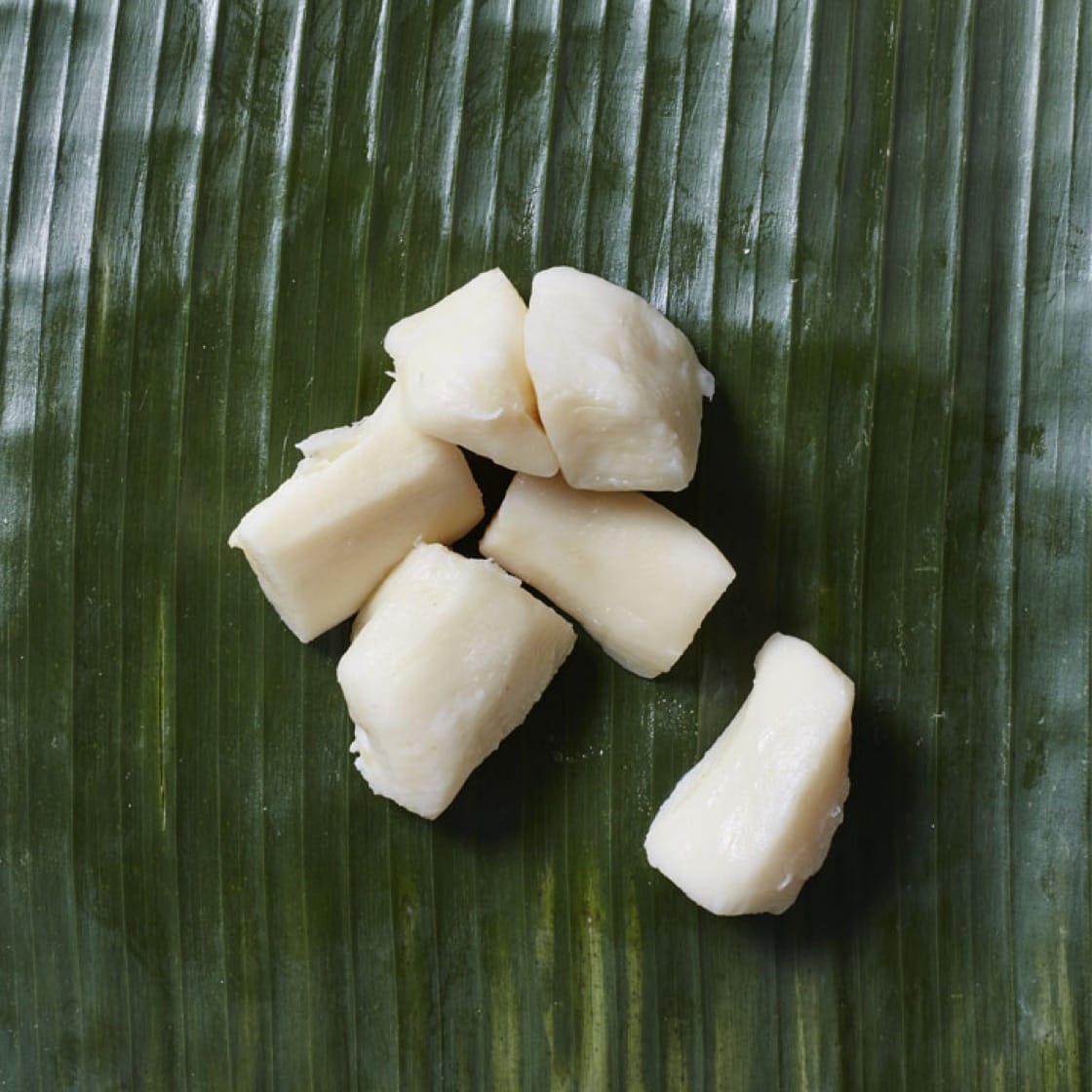 Tapai Ubi
While technically not a kueh, tapai is a fermented tapioca often eaten after a meal as the live cultures aid in digestion. It‘s sweet, mildly sour and just a little bit sharp thanks to its fermented nature. To make, tapioca is first steamed until its cooked. Next, ragi, a starter culture in the form of a powder is sprinkled over it and left to ferment for two days. 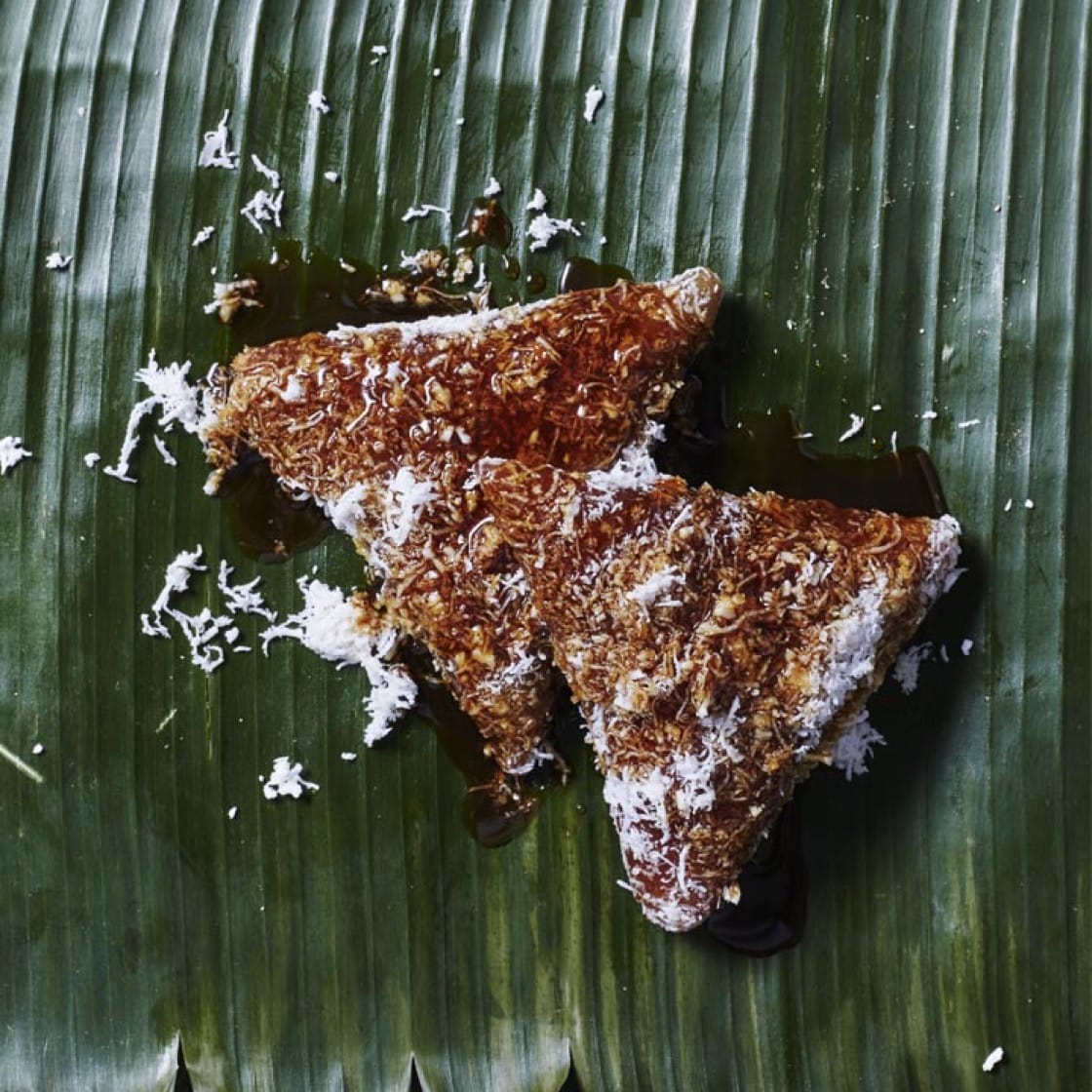 Lopes
Lopes is another fairly common kueh but few would know that the time taken to create the entire dessert is at least seven hours. That includes soaking the glutinous rice for three hours, shaping it in a triangle in a banana leaf and then boiling it for another four hours. While it’s usually sold without the banana leaves, its unique flavour remains and it’s enjoyed with grated coconut and a hearty serve of liquid palm sugar.
Advertisement
Advertisement