It’s been one and a half years in the making, but the timing has never been more right.

Master chef Koichiro Oshino of Singapore's one-MICHELIN-starred Shinji in Carlton hotel marks his 10th anniversary with the restaurant with the opening of a place to truly call his own: high-end sushi restaurant Oshino, which opened on February 27 at the newly refurbished Raffles Hotel. When asked how he felt, the congenial 50-year-old replies with a laugh: “Finally!”

“I am very happy because before I was still working under the direction of Shinji Kanesaka, but now, I can bring my own style into every part of the restaurant,” Oshino adds. A veteran chef credited with training some of the finest Edomae-style sushi chefs in the industry today, Kanesaka has four restaurants in Japan and three overseas to his name — Sushi Kanesaka in Ginza, Tokyo has one-MICHELIN-star, while the three overseas Shinji By Kanesaka outposts in Singapore and Macau have one star each.

The opening also marks a full circle return of the group to the hotel where Shinji by Kanesaka first debuted a decade ago in 2010. It later moved to Carlton in 2017 when the Raffles Hotel began its extensive overhaul. Both the Carlton Hotel outlet and its sister restaurant in The St Regis Singapore received a MICHELIN star when the guide launched in Singapore in 2016.

At the new restaurant, the moody, darkened Edo-era sushi-ya setting is distinct from Shinji's light and bright style, and the cuisine of Oshino also focuses heavily on sushi by departing from the usual order of courses to intersperse sushi in between cooked dishes.

"I am very excited to have my name on the door because this restaurant is truly 'Oshino-style, which is built on what I have developed after 10 years with Shinji," says the chef.

READ MORE: What Our Inspectors Say About Shinji 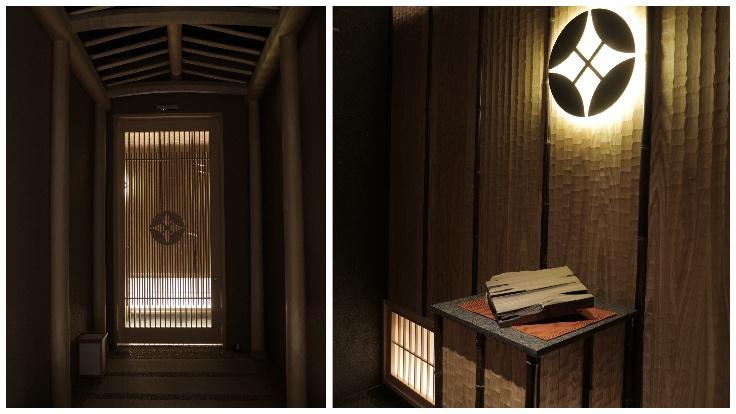 The Look
Blink and you’ll almost certainly miss it — Oshino lies behind an unmarked door by a lift lobby adjacent to Raffles Courtyard. But step through its doors into the darkened entryway and you’ll be instantly transported to an elegant teahouse setting from the Edo period 400 years ago.

The new restaurant occupies the 900 square feet space where Ah Teng’s Bakery used to be, and seats just nine along its hinoki wood sushi counter. Inspired by traditional sushi-yas of the era, Oshino’s interiors are darkened and intimate, and its walls and ceilings are clad in black bamboo.

Designed by industry veteran Junzo Irikado, the centerpiece of the restaurant is a piece of 2500-year-old jindai-sugi (lignitised Japanese cedar), which was buried in BC466 and later carefully harvested from the volcanic remnants of Mt Chokai in Yamagata, Chef Oshino’s hometown. Now, it takes pride of place as a beautiful counter set behind the chef as he works.

“Everything is very personal to me,” he says, pointing out the restaurant’s logo — bearing his family crest — emblazoned on the back of each seat, and the spotlights that cast an atmospheric circle of light on the hinoki wood counter in front of each diner. “I like to think that I am presenting each of my sushi creations in a beam of moonlight.” 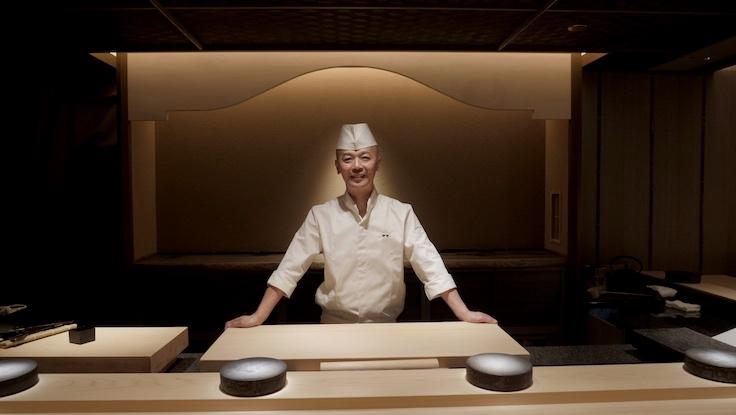 The centrepiece of the restaurant's interior is the unassuming counter behind the chef, made from 2,500 year old Japanese cedar (Photo: MICHELIN Guide Digital)

Guests can expect to be greeted and served personally by the chef and his wife Motoko, 45, who takes care of the front of house. After a decade working together at Shinji, the couple moves seamlessly in tandem at Oshino. “After so long we understand each other even without speaking, we can communicate through our eyes,” says the chef in half-jest.

While the space behind the counter is traditionally sacrosanct to the itamae or sushi master, here, Motoko-san takes the stage at the end of the meal to perform a formal Japanese tea ceremony, presenting guests with frothy matcha and wasabon sweets. “Only here,” says the chef, with a chuckle.

READ MORE: Omotenashi: The Reason Why Japanese Hospitality Is Different 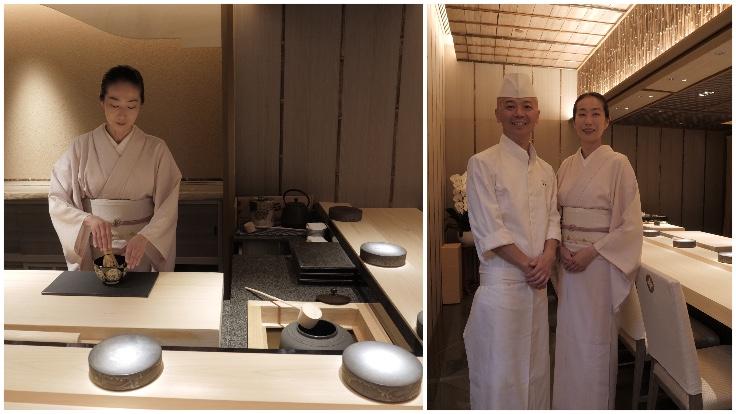 At Oshino, the chef's wife Motoko offers hospitality and marks the end of the meal with a Japanese tea ceremony (Photos: MICHELIN Guide Digital)

The Cuisine
Oshino focuses on classic Edomae sushi cuisine and its unique traditions. “In Shinji, I always noticed that by the time diners ate the cooked dishes and sashimi, they were too full to enjoy all the sushi,” explains the chef. “So here, we focus on the sushi and we serve it throughout the meal between the other dishes.”

The devil is in the details for connoisseurs who can expect a different experience from that at Shinji. For one, the chef has created his own blend of sushi vinegar for the shari so that that the rice is tinged with red and bears the sharper flavour profile of a special three-year-aged red vinegar that the chef has sourced.

The acidity is the perfect foil for the premium seafood and fish served like seaweed-pressed flounder, tai (red snapper) and kisu (silver whiting). Each morsel might be brushed with one of five different soy sauces that the chef has infused with aromatics like spring onion and yuzu. 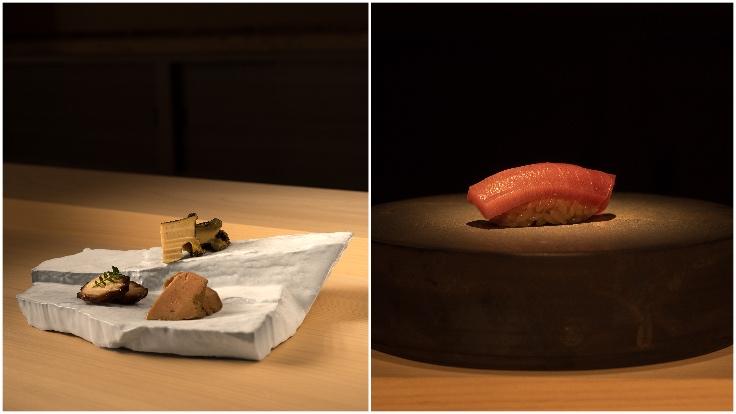 “In Japanese culture, we believe in the importance of balance and harmony,” he says, giving an example of how it extends to his food. “Every time I eat ebi (shrimp) sushi, I always feel like the rice disappears while the flavour of the ebi is still in my mouth. So, for Oshino, I recreated it as a tiny, tiny, ebi-don (shrimp rice bowl). Now, there is balance between the kuruma ebi (Japanese tiger prawn) and the sushi rice which I cook in shrimp stock.”

The chef also says that his gift to every diner is embedded in his personal philosophy of “Ichigo-ichie” which denotes the fleeting nature of time and the importance of savouring each moment. “This is what my father taught me: to treasure every encounter with every person because it will only happen once, so each time you come to Oshino it will be a truly unique experience.”