Emmanuel Stroobant, chef-owner of MICHELIN-starred restaurant Saint Pierre, was behind the wheel on the way to the MICHELIN Guide Singapore 2019 Star Revelation and gala dinner in September last year when the call came.

“It was a call from the Michelin team in Hong Kong, so I knew it was going to be about the results that evening. I pulled over and was breathless with anticipation,” recalls the chef. That was the moment when Stroobant found out that Saint Pierre had been promoted to two MICHELIN stars. “It was very emotional because we really fought for it, we busted our tails to get it.”

It has been a two-decade long journey full of ups and downs for the Belgium-born chef who was one of the pioneers in Singapore’s fledgling gastronomic scene when he opened fine dining French restaurant Saint Pierre at the turn of the century. The restaurant went on to clinch many awards for its haute cuisine, so Stroobant felt it came out of left field when the MICHELIN Guide was launched in Singapore in 2016 and Saint Pierre missed out on getting a star.

“It was a blow, but on hindsight, I think it was the best thing that happened to me because it kicked my butt,” shares the chef frankly. “I had been swimming in my own delusions thinking that I knew everything about fine dining, and that it was going to be easy. It was hard to accept but it really gave me that kick, that motivation to say, let’s fight for it.” 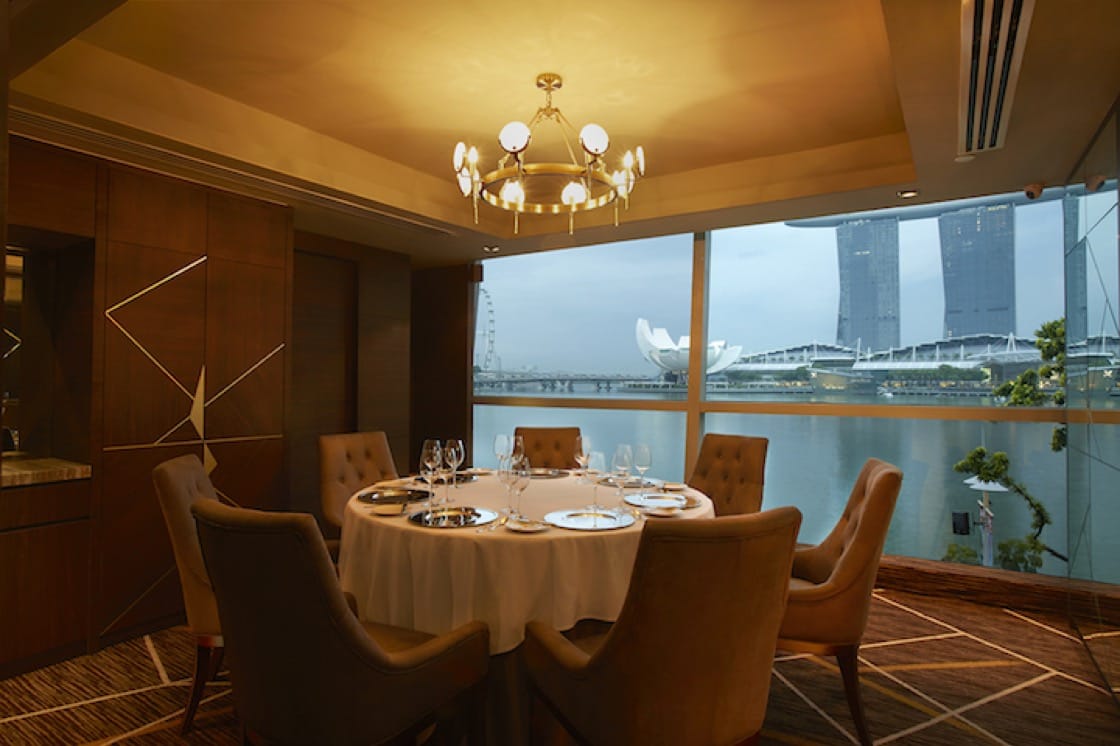 Saint Pierre went on to earn its first MICHELIN star in 2017, retaining it in 2018 before upgrading to a second star in 2019. “Our achievement this year is the result of the work of the two years before that. It’s hard to pin point what takes you from one star to two, but I think we needed the time to build a team that was ambitious and had self-discipline,” says Stroobant.

The yoga enthusiast also attributes some of his success to bringing part of his practice into the kitchen. “Running a restaurant is a very monotonous business, so it is crucial that we practice mindfulness. Instead of going through the motions, you need to learn to be mindful, from the cooking to the setting of the cutlery on the table.”

A time to regroup and re-energise

In January this year, Saint Pierre served its last diners and then closed its doors for a major renovation to revamp its interiors.

But a two-month break is no time for two-MICHELIN-starred restaurant to rest on its laurels. “We gave our staff a two-week break to thank them for all their hard work in the past year and then they came back and it was full steam ahead with training,” says Stroobant.

Unfortunately, his own plans for a short apprenticeship at three-MICHELIN-starred Kashiwaya in Osaka with renowned Japanese chef Hideaki Matsuo were dashed when travel restrictions hit in light of the COVID-19 outbreak. 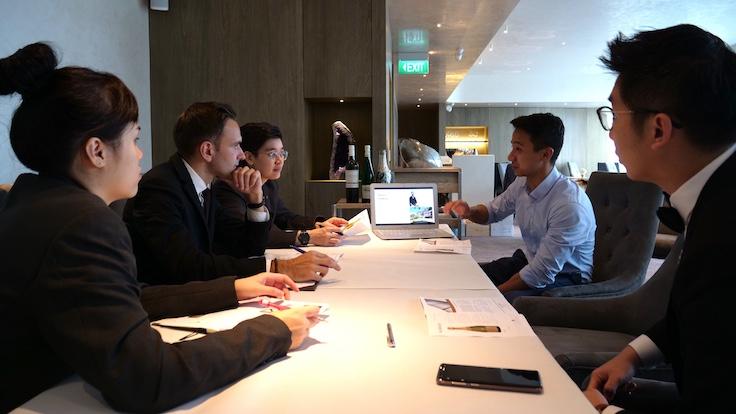 On the upside, the closure afforded Stroobant and his team of chefs the luxury of time they never had before to experiment with and tweak their dishes. “We had five weeks to do trials. Although the menu structure is still the same — you have the Adventure, Discovery and Classic menus — we managed to find our final style of modern French cuisine with Asian elements,” says the chef, explaining the restaurant’s slant towards vegetables and seafood, with imported produce coming in four or five times a week from Japan. “The quality of the ingredients we get is something I’m very proud of, and I believe is a contributing factor behind us making the leap from one star to two.” 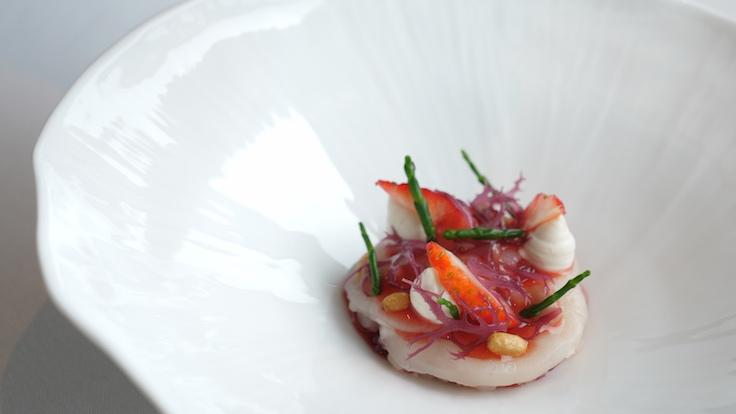 A refreshed and renewed restaurant

On 5 March, the restaurant reopened with renewed vigour and a fresh new look. The restaurant still occupies the second-floor space of One Fullerton overlooking Marina Bay, but it has been completely reimagined by local design studio Terre, which also designed the interiors of Saint Pierre when it was at the Quayside on Sentosa Island, as well as Stroobant’s newest opening, a casual restaurant named Kingdom Of Belgians. 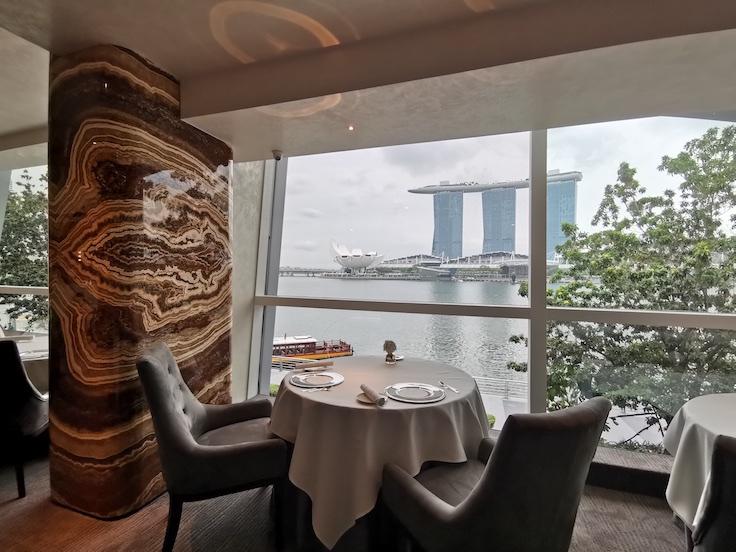 After: The private dining room has made way for a bigger dining room and more window-side tables (Photo: MICHELIN Guide Digital)

A wide, welcoming new entry way framed by an imposing brass door and raised ceilings open up the space and show off the restaurant’s panoramic view of the bay to its full glory. Combining the private dining room with the main floor adds space for two more tables with prime views of out the floor-to-ceiling windows. A stunning red and gold marble-clad pillar draws the viewer's eye to the centre of the room, affording the tables on either side of it a sense of privacy and intimacy.

Out of sight from the diners, the kitchen has also undergone a makeover, allowing a better flow of service from the pass out to the dining room. “After four years, you grow into the space and you know what you need,” says the chef. “We were inspired by our second star. Before, the focus was really just on the food, but now the whole experience from the entrance to the seating just embraces people better and is more befitting a two-star restaurant.”