9 Places To Get Food Souvenirs From Jewel Changi Airport

You can take home not just a slice of Singapore, but also yummy souvenirs from all corners of the world at the spanking new airport retail complex.

Retail complex Jewel Changi Airport, which opens to the public today, has been the talk of the town, having attracted hordes of curious visitors to check out the airport without bringing their passports in its series of public previews last week.

The 10-storey dome-shaped building is chock-full of shopping and retail options. Out of the 280 outlets, there are many exciting new-to-Singapore food brands including American gourmet burger chain Shake Shack, London surf and turf restaurant Burger And Lobster, and Swiss chocolatier Laderach in the steel and glass-dominated 135,700 square metre space.

With a plethora of dining and retail options (coupled with a YOTELAIR Changi hotel and a cinema), Changi Airport Group hopes to attract transit passengers who are on a more than five-hour layover in Singapore, on top of local visitors. Last year, one-third of the airport’s 65.6 million passengers arrived via transit flights. With the opening of the $1.7 billion mixed-use development (which replaced an open-air Terminal 1 carpark), Changi Airport looks set to strengthen its grip as The World's Best Airport, an accolade that it has received from Skytrax World Airport Awards for the seventh consecutive year.

Offering more convenience to travellers, 26 airlines including Singapore Airlines and Emirates offer an early check-in service at Jewel two hours prior to their flights.

Besides eating and shopping, visitors can also check out a slew of food souvenir options all under one roof at Jewel. Many restaurants, cafes and confectioneries are offering goodies in travel-friendly packaging that can be easily hand-carries and are a great way to commemorate their sojourn in Singapore. 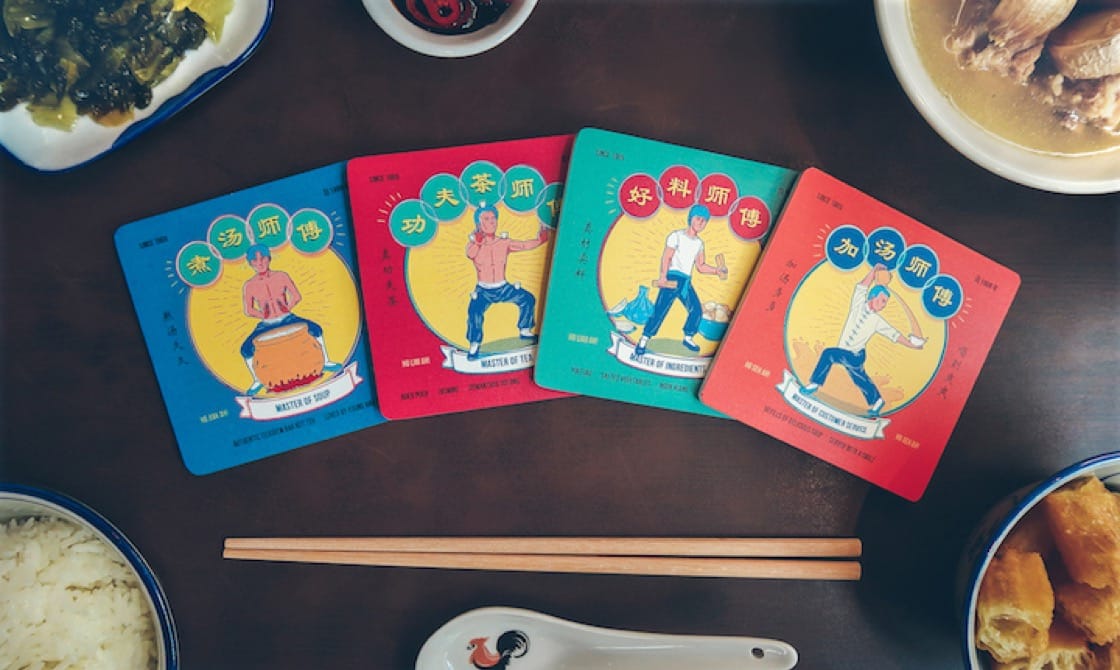 Fans of bak kut teh can wear their love for the peppery pork rib soup on their sleeves. The Bib Gourmand-recognised Song Fa Bak Kut Teh restaurant has commissioned home-grown design studio Wheniwasfour to create a hip and retro merchandise line to commemorate the opening of its 10th local outlet in Jewel Changi Airport as it celebrates its 50th anniversary this year. The merchandise includes magnets, acrylic pins, coasters and keychains that are inspired by terms and concepts that are unique to bak kut teh.

The coasters and keychains carry motifs of kungfu tea, which is typically drunk alongside bak kut teh. Another design bears the “More Soup Please” saying, a reference to the common request to top up one’s bowl with robustly-flavoured broth. Completing the designs are cute graphics of ingredients such as pepper, pork ribs and garlic. There are also badges in the shape of the traditional bowls with painted roosters and the iconic Good Morning towels. For those who prefer something edible, the chain also retails its bak kut teh spice bags and King’s Garden Tea (oolong and green tea infused with chrysanthemum flowers). 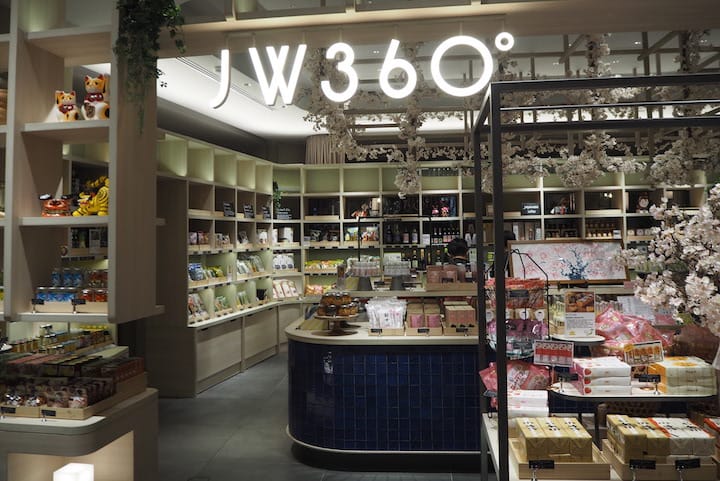 Japanophiles can have a field day at JW 360° (Japan Way 360°), a multi-concept Japanese outfit that houses a restaurant, cafe and retail shop. JW 360° is the second retail outfit that is run by the East Japan Railway Company (JR East) that operates trains including the Shinkansen (high speed bullet train) in the Eastern region of Japan. The train operator has brought Nomono, its chain of retail shops that stock snacks and souvenirs from all over Japan overseas for the first time.

Choose from more than 100 Japanese snacks and sweets — some of them making their debut in Singapore for the first time. Top products to try include crisp air-fried Amori apple chips, Mimona Monaka Ice Cream (wafer ice-cream with seasonal fruit) from Niigata and Hagi no Tsuki Custard Cream Cake, a fluffy sponge cake filled with custard cream, from Sendai. 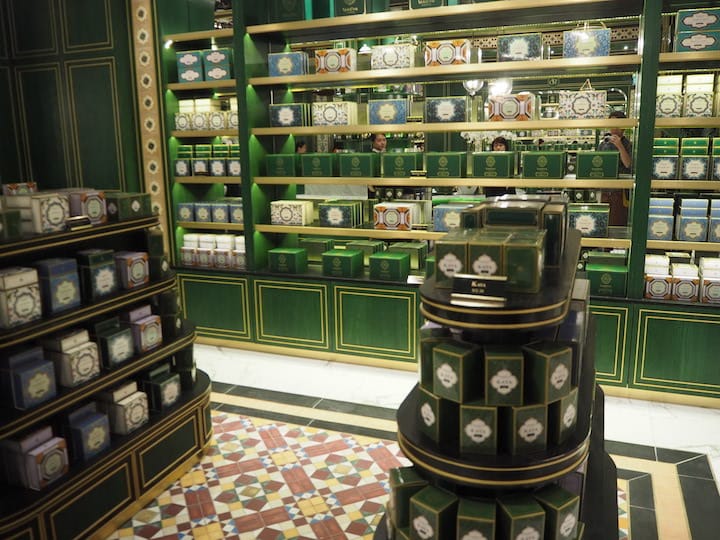 Singapore cooking doyenne Violet Oon has rolled out her fifth and largest outlet that combines the best of her other concepts including a satay grill and colonial Hainanese food. Keen to take home a keepsake after tucking into signatures such as the Nyonya Popiah, Beef Rendang and Dry Laksa? The elegant 3,800-square-feet restaurant has a retail corner that stocks local favourites such as peanut and spice island cookies, pineapple tarts and kaya. New products that will be launched in the coming months include Guava Jam, Calamansi Marmalade and Pineapple Jam.

New York dessert patisserie Lady M, which is known for its crepe cakes, has debuted its line of bonbons in its fifth outlet here. Can’t carry a slice of Lady M cake while on the go? These bonbons are easier to store in one’s luggage. Choose from its range of 23 types of gummies, flavoured nuts and chocolates that draw inspiration from haute Parisian confectionery, to Shanghainese sweets and more. Some of them are tipple-inspired such as gummies which are flavoured with gin and tonic, peach vodka or mojito leaves. Also try the salted milk chocolate cereal, cognac orange liqueur chocolates and Criollo Chocolate, which are roasted in dark chocolate from Peru. 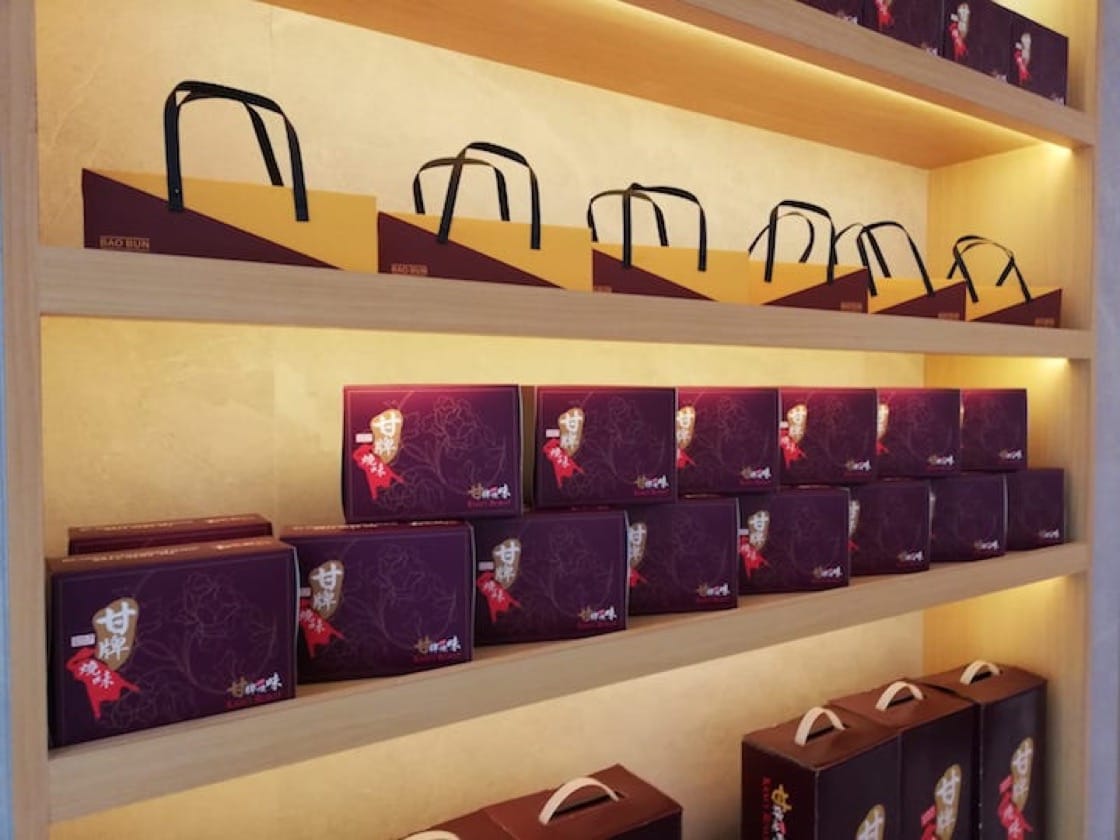 The signature roast duck and buns at Kam's Roast come in travel-friendly packaging at its first airport store.
5. Kam’s Roast

The Singapore outpost of one-Michelin-starred Kam’s Roast Goose in Hong Kong has opened its first airport outlet at Jewel Changi Airport. Kam’s Roast’s signature roast duck, which weighs up to 3kg, can be packed as a hand-carried item.The duck is wrapped in parchment paper and cling film before being placed in a box. Also available in travel-friendly packaging are its cured sausages, buns sandwiched with roast pork, duck or char siew. 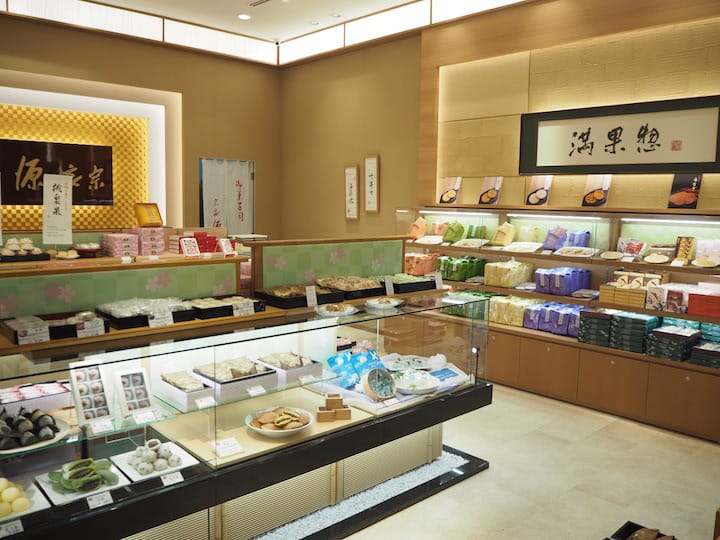 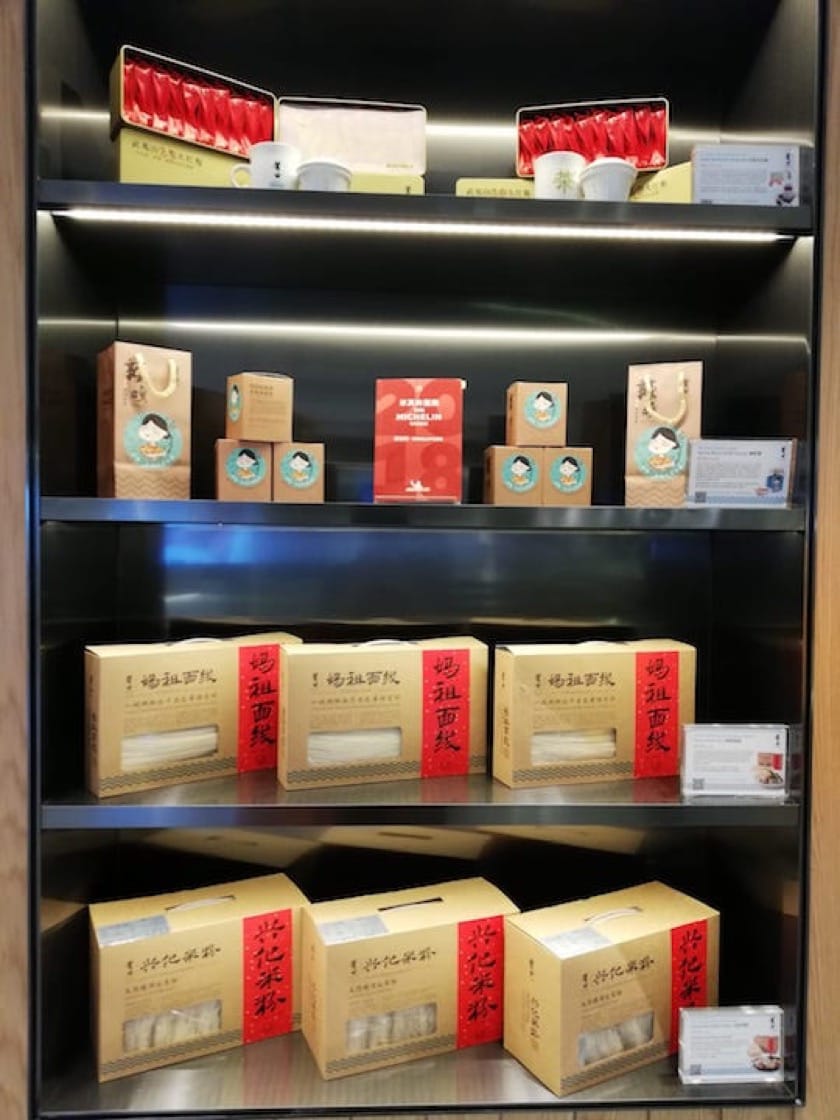 Cannot get enough of the homely Fujian cuisine from home-grown restaurant chain Putien? You can try your hand at cooking some of the signature dishes by the chain, which has received a Michelin star for its flagship Kitchener Road outlet. Its latest outlet has a retail section that flanks its entrance.

Putien products include the Mazu Mee Sua, which is meticulously handmade through constant stretching, pulling and drying of the dough, and signifies longevity. Another traditional product is the Heng Hwa Bee Hoon, a sun-dried silky smooth rice noodle.

Other retail items include the Early Spring Da Hong Pao tea leaves that are handpicked from Wuyifeng from Beijing and Spice Mum Chilli Sauce that is a concoction of three types of chillies, lime, garlic and onion. 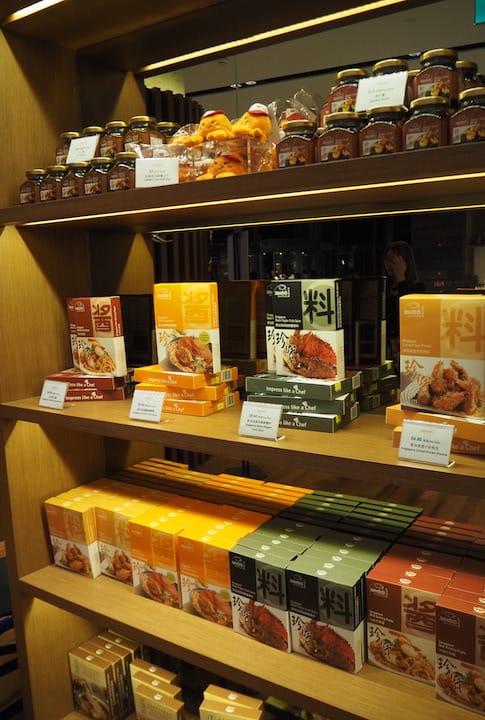 Recreate your dining experience at the iconic seafood restaurant at home with its range of pre-mixes, spice packs and sauces. The 32-year-old Jumbo Seafood restaurant, which will open its South Korean outlet by September and has restaurants in Thailand, China and Bangkok, is best-known for its chilli crab which is cooked with more than 10 spices including lemongrass, tau cheo (fermented bean paste) and turmeric in a velvety eggy gravy. Tourists can try their hands at replicating the dish with its chilli crab paste. Other retail products include the cereal prawn premix, black pepper crab spice mix, and sambal and X.O. sauces. 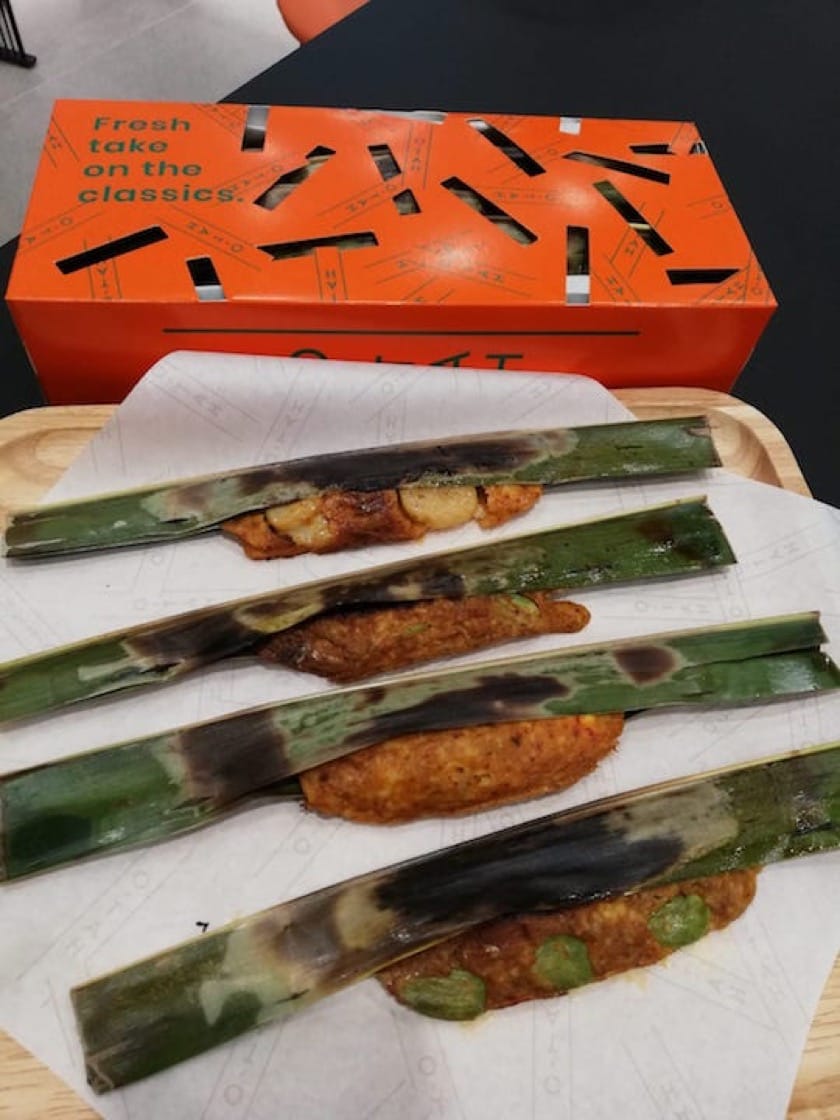 If you are bored of the usual flavours such as mackerel fish, prawn and squid, the second-generation owners have concocted four trendy flavours that jazz up the fish and spices combo. They include cream cheese and corn, salmon, scallop and petai with anchovies.

RELATED: What To Eat At Jewel Changi Airport

From luxe to low-key, these top-end restaurants will help you plan your business deal-making, employee team lunches and corporate celebrations with confidence.

sommelier wine wine pairing
All articles of Dining Out