Fish has an auspicious representation in Chinese culture, especially as the Chinese New Year arrives. In Mandarin, the word for fish is 鱼 (yu), which is a homonym for "surplus" or "extra", making fish dishes a must-have during Chinese New Year celebrations. Fish, when tossed during lo hei, is accompanied by a roaring 年年有余 (nián nián yǒu yú) and 鱼跃龙门 (yú yuè lóng mén) to manifest abundance and prosperity.

Indeed, it is a season to relish and savour dishes abundant in fish to ring in a smooth-sailing year, and these Bib Gourmand locations in Singapore, which come recommended by our MICHELIN Guide inspectors, are more than ready to feed and nourish the soul with mouthwatering dishes featuring fish. 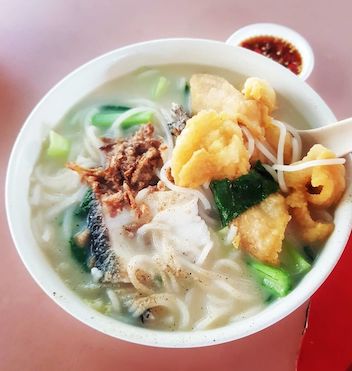 Located at Whampoa Food Centre, the queue here starts early in the day, and the stall is usually closed by noon due to hungry regulars eager for their bowls of signature fish soups that come in sliced, fried, or mixed, accompanied by thick bee hoon noodles.

According to our inspectors, the tom yam soup and fried fish soup are worth a try. 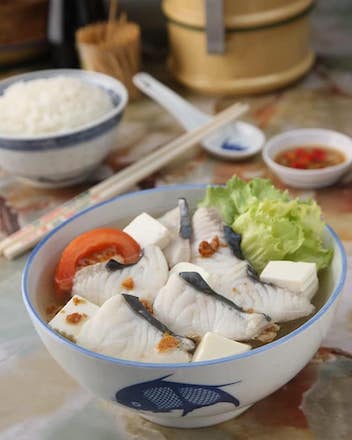 Run by second-generation hawkers who took over the stall at the age of 21, Jun Yuan House of Fish located at Old Airport Road Food Centre opened in 2014 and offers fish soups cooked in herbal broths that our inspectors describe as "sweet with rich accompaniments".

According to the owners, the broth is prepared with pork, seafood, and a combination of angelica and polygonatum roots. While our inspectors recommend the grouper, other styles being served include batang (mackerel) and fried fish. 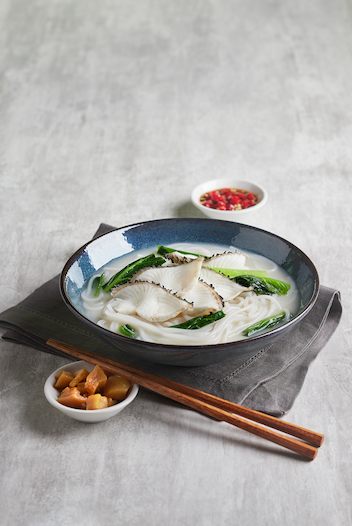 Praised by our MICHELIN inspectors for their famous and invigorating speciality of milky white fish soup that is made by cooking fresh snakehead fish and its bones for over four hours, Ka Soh has expanded to Malaysia and Indonesia as well.

The restaurant's signature dish, the Sliced Fish Noodle Soup, comes in varying sizes to serve parties from one to six, as well as other popular fish-based menu items like Fish Slices with Tossed Hor Fun and Bean Sprouts and San Lou Hor Fun. Ka Soh has also ventured into frozen food items that include their popular fish soup that is made without salt and flavour enhancers. 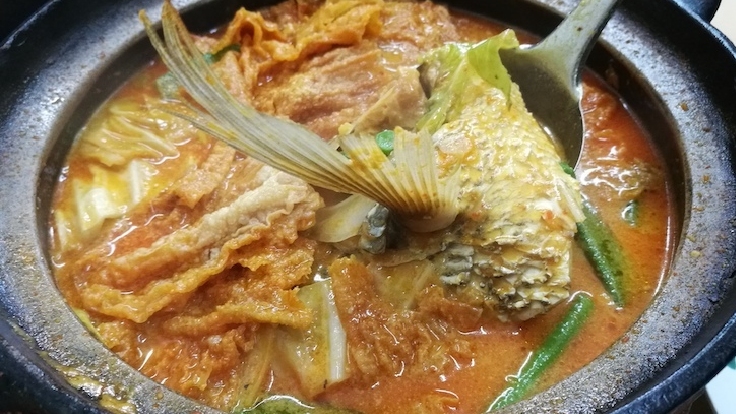 Open for more than 50 years and now run by its third-generation owners, this Keong Saik Road institution has been serving zhi char classics such as curry fish head and curry fish tail, using grouper instead of a traditional snapper. It is recommended to pre-order special dishes prior to one's visit and to prepare for queues, especially during lunch and dinner hours.

Other fish-based dishes that attract diners are the Black Bean Fish Meat with bitter gourd, Hong Kong-Style Steamed Fish Head, Stir-Fried Fish Meat with Sambal Kaffir Leaves, and Stir-Fried Kai Lan with Sliced Fish. Restaurant patrons and regulars will be delighted to know that Kok Sen already has an online store that offers take-away and deliveries. 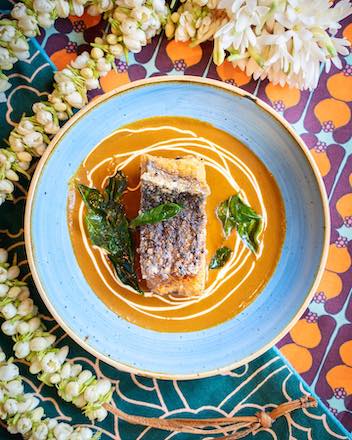 Rishi Naleendra of MICHELIN-starred Cloudstreet celebrates his Sri Lankan heritage at Kotuwa, which opened in 2020. Focusing on seafood recipes from Sri Lanka's capital city of Colombo, one of the restaurant's specialties is a Yellow Curry of Sea Bass where a crispy fillet of sea bass is served with a rich coconut gravy.

Our inspectors urge everyone to not miss the hoppers — crispy pancakes with spongy centres — as they are a perfect companion to the rich and flavourfully layered dishes. 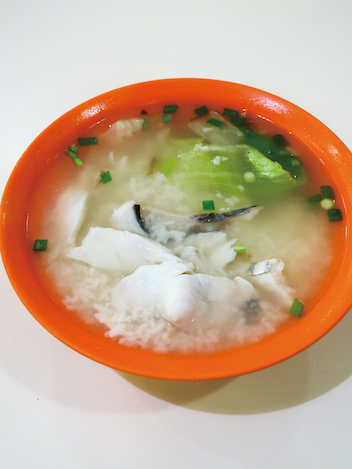 A haven for hawker food lovers, Newton Food Centre is home to Kwang Kee Teochew Fish Porridge, which is run by a second generation hawker who has been helping his father operate the stall at the tender age of 13.

Recommended by our inspectors for its fish porridge, which is sweet and abundant with fish fillets, Kwang Kee Teochew Fish Porridge also serves fried fish bee hoon, fish head soup, and a dual fish soup that contains both sliced and fried fish. The fish broth is prepared primarily by slow-cooking fish bones, and no pork or lard is included in the broth's preparation, so it is safe to be consumed by diners who avoid pork in their diet. 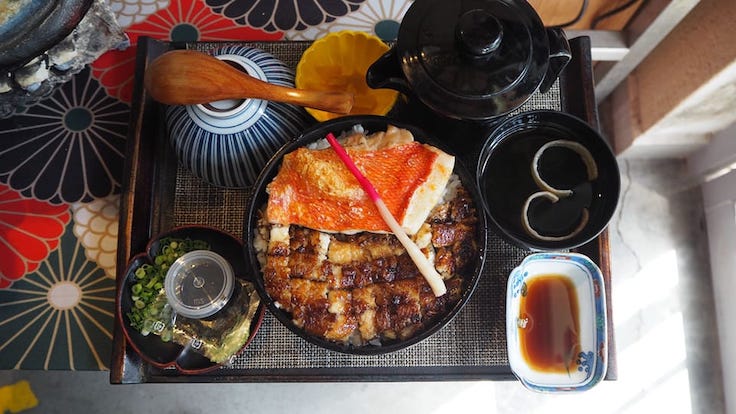 For those who prefer a Japanese fish meal, Man Man (Tanjong Pagar) specialises in unagi (freshwater eel), which are dipped in a special sauce multiple times before they are grilled over charcoal. Our MICHELIN inspectors say that it is quite a performance to watch the chefs clean and gut the eel in the glass-fronted kitchen before being grilled over a charcoal pit.

The inspectors also say that because of this treatment, the unagi arrives to the table crispy on the outside and soft and yielding on the inside. The meal is made even more delicious thanks to the accompanying secret sauce. No bookings are taken so it’s worth arriving early. 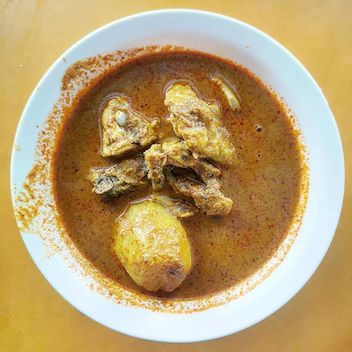 Another Bib Gourmand spot specialising in curry fish head, Na Na Curry, located at Bukit Merah View Food Centre is popular for their spicy and potent rendition of the local specialty. With their rempah (spice mix) made in-house, our inspectors describe the curry fish head in claypot to be delicious. The fish head curry here features fresh and meaty ang go li (Goldbanded Jobfish) or ang sai (Red Snapper), which hold their texture well while cooking. 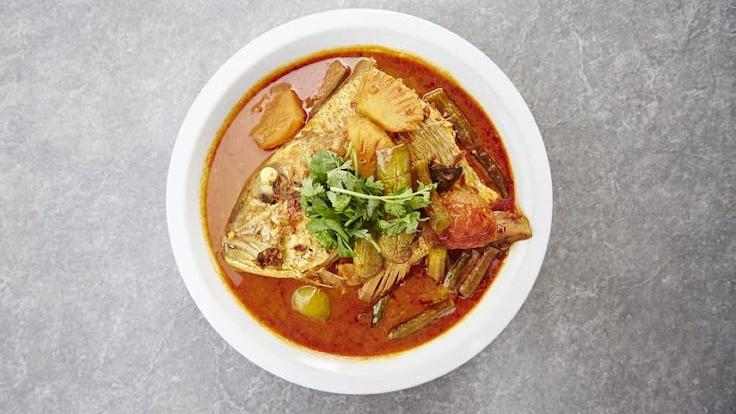 A go-to place for west side residents and food lovers in the know, Zai Shun Curry Fish Head is a busy stall at Block 253 Jurong East Steet 24, famously known for its signature curry fish head.

A wide array of farmed and wild-caught fish is usually on offer, from the more common red grouper, barramundi cod, and pomfret to rarer species of fish like giant grouper and empurau. Here, the fish are steamed in a variety of methods: Cantonese or Teochew style, with soy sauce or plain, with prices depending on the type and weight of fish.